You still have time to sign up for Enrique Abeyta's Empire Elite Growth; Bank some profits... Or don't do anything; We're in a terrible hole; Podcast with Bill Ackman

1) The single biggest win we’ve had since launching Empire Financial Research more than a year ago is space-tourism company Virgin Galactic (SPCE).

After first recommending shares on December 19 at $10.20 in Empire Investment Report, they ripped higher into 2020…

We told subscribers to sell half of their position for a double at $20.40 per share on February 10… and another half at $37.64 per share only nine days later. So, they’ve taken more than their original investment off the table with huge gains… and still have nearly a double on the remaining shares. Take a look… 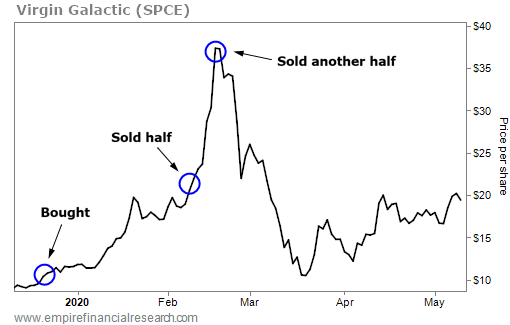 One of our subscribers even took our advice and made more than $10 million in less than two months!

I wish I could tell you that I was the genius behind this investment. But I’d be lying…

All of the credit goes to my colleague Enrique Abeyta, who just released his Empire Elite Growth newsletter to the public. It’s a research service solely focused on finding stocks that Enrique believes have 500% to 1,000% or more upside opportunity.

We’re offering it at a special introductory rate for the next few days, so please don’t miss out.

He went from poverty and childhood trauma in Phoenix… to the Ivy League… to making millions on Wall Street.

I promise you will not regret watching this film about Enrique’s life.

He’s led three different major hedge funds… One of which he grew by 130,000% in four years.

And he famously made money through the tech meltdown… 9/11… and the financial crisis in 2008.

Enrique’s approach is unlike anybody else’s in the markets. He doesn’t consider himself a value investor… or a growth investor.

He’s a “make-money investor” – which means that, unlike a more traditional value guy like me, he’ll recommend stocks like Virgin Galactic.

And now, Enrique is sharing his unique approach with regular folks… Including the one stock-picking secret he’s reserved for millionaire clients for the last 25 years. He even names one of his favorite investments right now – for free.

And for the next few days, you can get his research at the cheapest price we’ll ever offer it. So today, I recommend you watch this brand-new video while it’s still available.

2) Following up on yesterday’s e-mail, in which I explained why I’ve become more cautious on stocks over the balance of this year, I want to be clear about a few things…

First, I wasn’t recommending selling everything and running to the hills with canned goods, guns, and gold. Far from it. I simply think that, with the S&P 500 Index now up more than 34% since its lows only 50 days ago, it’s prudent to bank some profits and generate some “dry powder,” so that you can play a strong hand if the market dips.

But if you have a multiyear investment horizon, you don’t need to do anything. Years from now, it won’t matter that stocks might have bounced around a bit in the last eight months of 2020. Just stick with the plan (or at least what I hope is your plan!) of living beneath your means, saving regularly, and investing the savings into blue-chip stocks and index funds.

3) I say this despite the fact that we are in a terrible hole… We’re in uncharted waters in so many ways – with the economy in another Great Depression, as much as a quarter of our workforce unemployed, and budget-busting spending to try to offset the massive hardships that millions of businesses and people are facing.

Below are some charts from this New York Times article: How Bad Is Unemployment? ‘Literally Off the Charts.’ The first one shows monthly job losses that, if I didn’t cut it off and draw an arrow, would go on and on and on… 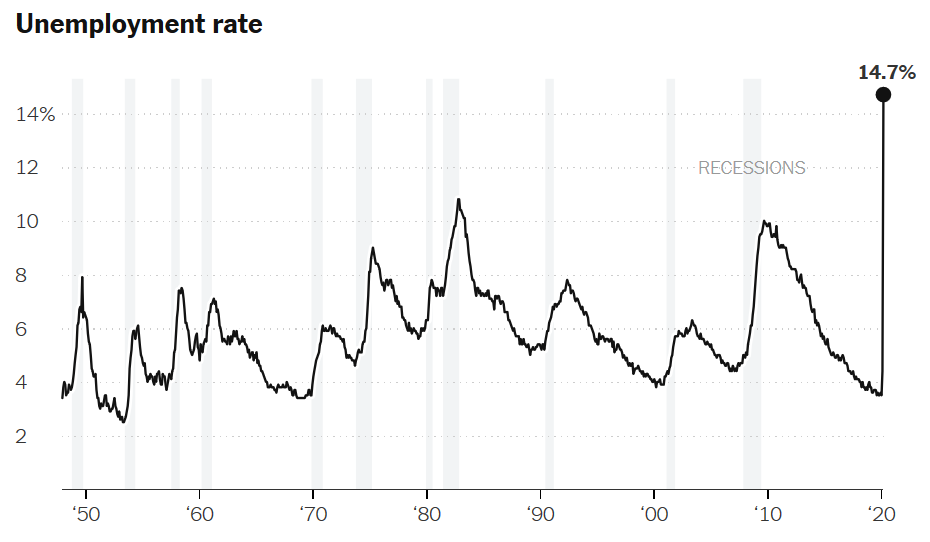 The unemployment rate, however, far understates the true carnage, which is better captured by the share of the population that is employed… 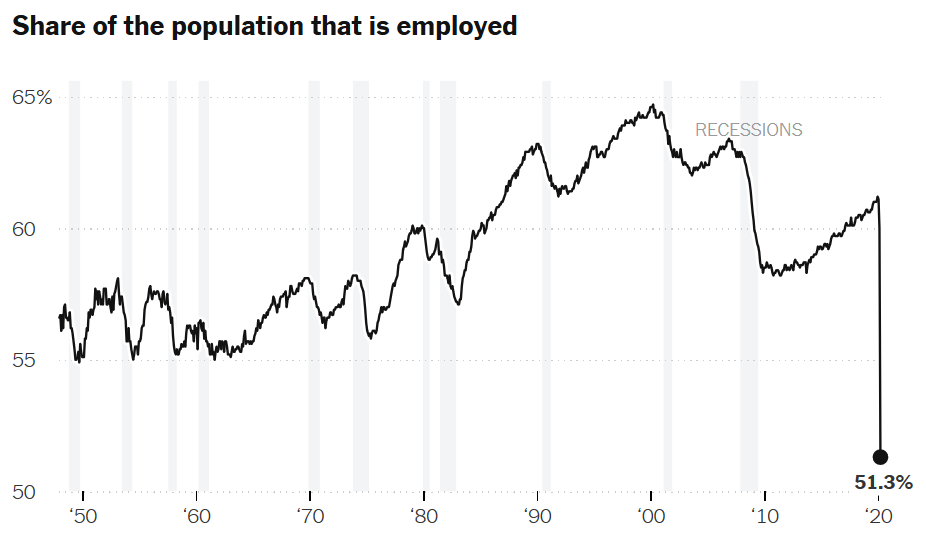 We talk about how he’s bounced back from the brink of failure not once but twice, the lessons he’s learned from his parents and raising kids of his own, his information sources, making big bets, the world today and where we might be headed.

Here are a few highlights from our conversation:

I’ve always had this view that success is not a straight line up. If you read the stories of successful people, almost every successful person has had to deal with some degree of hardship, whether that hardship is personal hardship, health-related hardship, or a business issue.

I admire people who take on unbelievable challenges and succeed.

One of the nice things psychologically about going to an office is that you go, you focus, and then when you come home it’s easier to leave it behind and it’s much harder to do that when your office phone is in the TV room.

I actually think that people will be that much more desperate for human connection after this experience than they were before.

Even [Warren] Buffett makes mistakes, which is instructive in and of itself. The good news is when you buy things as opposed to short things, your mistakes become smaller.

One of the most influential things he [Buffett] said to me was if you want to be successful, all you need to do is look around the room and think about the classmate or classmates you most admire and what qualities they have and just decide to adopt those qualities. If you do that, your chances of being successful go up enormously.