Writing and speaking publicly about stocks; Commitment bias; Listening to contrary opinions; Buffett's mistake not selling Coca-Cola; 'The Fidouchies'; Reason No. 5 why getting rich increases the odds that your marriage goes bad

1) Over my career, I've often written and spoken publicly about many of my favorite ideas, both long and short. It has helped me make a name for myself and build my business. And I have met a lot of interesting people who shared valuable information with me.

For example, it was in the aftermath of my short pitch of Lumber Liquidators (LL) at the 2013 Robin Hood conference that led an industry insider to reach out and give me the story about the company selling Chinese-made formaldehyde-drenched laminate flooring. I then took the story to 60 Minutes, which aired a devastating takedown of the company that crashed the stock.

One of the dangers of going public with an idea, however, is commitment bias. Numerous studies show that most humans, after they publicly commit to something – not just stocks, but a spouse, friend, or business partner, political candidate, point of view, etc. – a change occurs in their brain. Barriers go up regarding anything that is contrary to their publicly stated view. Not only don't they seek out disconfirming information but, if presented with it, they have a hostile reaction. They dig in their heels and are extremely unlikely to change their view, even if it's blindingly obvious that they've made a terrible mistake.

If you behave this way, you are, as Charlie Munger likes to say, "a one-legged man in an ass-kicking contest."

Given how powerful and dangerous commitment bias is, it's critical to be aware of this phenomenon and to try to combat it. The key is to actively seek out disconfirming information and force your mind to consider it fairly and unemotionally.

It's easy in concept, but difficult in practice. How many conservatives read the editorial pages of the New York Times or Washington Post? And, conversely, how many liberals read the Wall Street Journal? We should all strive to be like Munger, who once said:

Take [liberal economist and New York Times columnist] Paul Krugman and read his essays. You will be impressed by his fluency. I can't stand his politics; I'm on the other side. But I love this man's essays. I think Paul Krugman is one of the best essayists alive.

2) It's especially important to keep an open mind to disconfirming information if you're an investor. Think of all of the brilliant money managers who've lost untold amounts of money – even gone out of business – because of commitment bias (often combined with hubris).

Even Warren Buffett has been susceptible to it. In his 1996 annual letter, he wrote:

Companies such as Coca-Cola and Gillette might well be labeled "The Inevitables." Forecasters may differ a bit in their predictions of exactly how much soft drink or shaving-equipment business these companies will be doing in 10 or 20 years. Nor is our talk of inevitability meant to play down the vital work that these companies must continue to carry out, in such areas as manufacturing, distribution, packaging and product innovation. In the end, however, no sensible observer – not even these companies' most vigorous competitors, assuming they are assessing the matter honestly – questions that Coke and Gillette will dominate their fields worldwide for an investment lifetime. Indeed, their dominance will probably strengthen. Both companies have significantly expanded their already huge shares of market during the past 10 years, and all signs point to their repeating that performance in the next decade.

At the time, Coca-Cola's (KO) stock was around $30 per share. Two years later it hit $42 per share. It was a great company, but the valuation was absurd: at its peak, it was trading at 55 times trailing and 48 times forward earnings.

Though the company's earnings per share have marched steadily upward in the two-plus decades since then, the stock fell by 60% from its peak, remained depressed for more than a decade, and only recently surpassed its previous high from 21 years ago – as you can see in this chart: 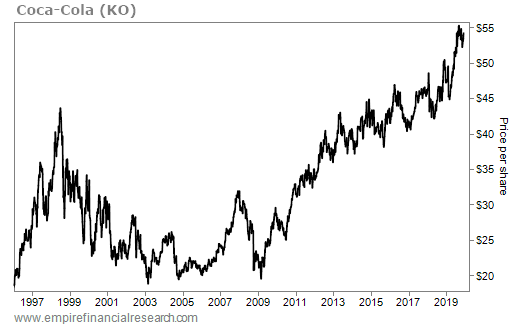 I can't find the exact quote, but at one point I recall Buffett saying to shareholders at an annual meeting something along the lines of, "You [shareholders] may wonder why we didn't sell obviously overvalued stocks like Coke at the peak. So do we..."

I think his mistake was, in part, due to commitment bias.

I'll return to this topic next week with some additional examples...

3) Continuing my pattern of offending some of my readers (building on yesterday's e-mail on stay-at-home moms), on Tuesday night, I attended the premiere of The Fidouchies, a 20-minute video created by famed short seller Carson Block of investment firm Muddy Waters. It's an awards show that called out the scummiest companies, sleaziest CEOs, and worst analysts. I applaud what Block is doing, but fair warning: it's incredibly raunchy and most people will find parts of it very offensive. From the New York Post: Stormy Daniels appears in Carson Block's filthy financial 'awards show'. Excerpt:

Carson Block is trying his hand at shooting videos – and his first effort doesn't look entirely safe for work.

The dirt-digging short seller – whose publicity stunts have included suing Equifax over its bungling of his personal information – has recruited Stormy Daniels to make a profanity-laced, sex-toy littered "awards show" called The Fidouchies...

Daniels, who is introduced in the show as a "former spiritual advisor to the president," presented an award to the Drug Enforcement Administration for its inability to control the opioid crisis.

"I would suggest [the DEA] take some Viagra, but apparently they're terrified of pills," Daniels said.

In an interview with the Post, Block called the film "an anti-awards show and roast for all the terrible people in this business."

Other targets include private equity firm KKR, Jho Low, the fugitive financier behind Indonesia's 1MDB scandal; and Jim Spanfeller, the buyout executive who presided over the implosion of Deadspin last month.

4) Reason No. 5 why making a lot of money can actually increase the odds that your marriage goes bad: When a couple is hustling to make ends meet, it's a bonding experience.