As of yesterday’s close, the company still had a $1.7 billion market cap, which is now certain to be worthless (it’s down roughly 70% today). It’s a good lesson for those tempted to speculate in distressed stocks – yes, I’m talking to you Hertz (HTZ) shareholders!

2) How completely unsurprising that SoftBank got snookered by Wirecard – yet another black eye for the Japanese tech investor: Wirecard’s Downfall Blows Up $1 Billion Lifeline From SoftBank, Credit Suisse. Excerpt:

Last year, before the unraveling of Wirecard AG, two heavyweight financial players set up an unusual $1 billion investment in the payments company. A structured product tied to that deal is now foundering, amplifying the damage from the fintech giant’s troubles.

In April 2019, Wirecard said an affiliate of Japan’s SoftBank Group Corp., one of the world’s largest technology investors, would buy €900 million ($1 billion) in convertible bonds from the payments company and enter into a strategic partnership with it.

3) Speaking of disastrous SoftBank investments, this story sure brings back memories – LOL! WeWork’s infamous private jet is still for sale 9 months later – with a new discounted price of $49.9 million. Excerpt:

4) While stocks sold off yesterday on concerns about sharply rising coronavirus cases in many states – nationwide, daily new cases are up 47% in the last two weeks – here are two more hopeful data points…

Something incredible happened today. The combined market cap of Square, Spotify, Tesla, Zoom, and Shopify just surpassed that of Berkshire Hathaway. What does one have to do with the other? Nothing, but if these aren’t a sign of the times, I don’t know what is. 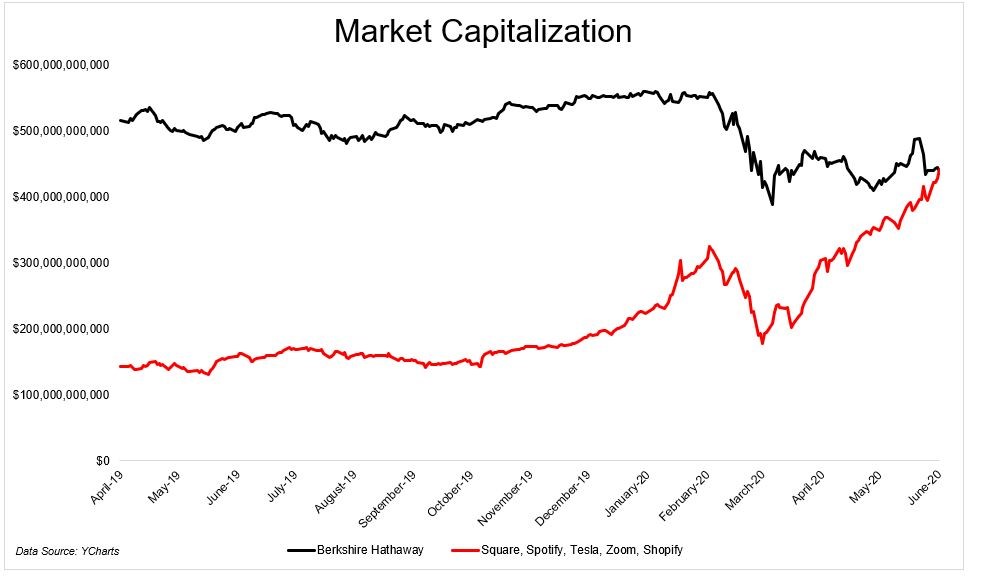 Normally I would be inclined to say something like “a sure sign of a bubble” in response to this, but I tend to agree with Batnick, who writes:

I know most people don’t want to hear this, but one of these numbers doesn’t have to be wrong. Berkshire can be priced appropriately here. So can these five growth stocks. That’s not a hill I want to die on, but it’s probably more likely than you or I believe.

6) Yesterday, Paul and I left what locals call “the ditch” (Yosemite Valley), which is super hot this time of year, and drove 90 minutes to the higher-elevation eastern part of the park where it’s much cooler.

We climbed a fairly easy 5.7 route up Stately Pleasure Dome, which is directly above my head in this picture:

Here’s a picture of me at the top, above the beautiful Lake Tenaya:

Later we walked through Tuolumne Meadows (in the background is Cathedral Peak, which we’re climbing today):