1) What a wild week! The sharpest, fastest bear market in history – the S&P 500 Index was down 35.2% from its closing high on February 19 to its intraday low on Monday – was followed by the sharpest, fastest move back into bull market territory in history, as the index rallied 20% from that point through yesterday’s close. Both Tuesday and the past three days were the best for the Dow in 87 years.

I rarely have opinions about where I think the market in general is going, especially in the short term, as this isn’t my area of expertise. I find it a far better use of my time to study particular companies and industries to try to develop proprietary insights.

But Monday was one of those rare times. In my e-mail that day, I wrote:

During the webinar [you can watch a reply of it here], we’ll explain, in great detail, why we’ve come to the firm conclusion that this is the absolute best time to be an investor in more than a decade. To borrow a phrase from one of my friends, “we’re trembling with greed” right now.

There are five main reasons why. I’ve been covering the first one for the past few weeks already…

My in-depth analysis – most importantly, studying how China, Japan, South Korea, Taiwan, Hong Kong, and Singapore have managed to beat the coronavirus – tells us that we too are likely to stop the rapid spread of the virus much sooner than investors are anticipating.

I’m optimistic that the measures we started taking a couple of weeks ago – and especially the stronger measures in the past week – are working. When we look back months from now, we’ll see that the number of newly infected people across the U.S. has already slowed down dramatically and will soon plateau and then start dropping, as the latest measures kick in – exactly along the lines of what happened in China two months ago.

But I believe that the expectations built into stock prices today are that the virus will keep spreading at a high rate for another one or two months at least, and that hundreds of thousands of Americans die from it this year.

If this doomsday scenario doesn’t come to pass, stocks will likely go nuts.

So after the big move in the past three days, what’s my thinking? Over the next few months, I no longer have a strong feeling. I think there’s a bell curve of possible outcomes, and we’re right in middle of it.

But if you ask me where we will be in a year (which is the absolute minimum time horizon I tend to consider) – I think odds are at least 75% that stocks will be higher.

I just completed a report on [the coronavirus crisis] that I think is the best work I’ve ever done.

In part one, I share my in-depth analysis of why I’m cautiously optimistic that the measures we’ve ramped up over the past couple of weeks to fight the spread of the coronavirus are having their desired effect, sharply reducing its replication rate.

At this point, in the absence of sufficient testing, there can be no certainty… But my educated guess is that the growth in the number of newly infected Americans is already slowing dramatically, and will soon plateau and then decline.

As it becomes clear that we’ve controlled the spread of the virus and know exactly where the outbreaks are – which could happen as soon as a couple of weeks from now – we can start bringing our economy back to life.

I’ve decided to release the first report publicly – you can access it here. The other two – which cover the investment implications of our work – are only available to Empire Investment Report subscribers. If you’d like to subscribe and take advantage of the best deal we’ve ever offered, click here.

I hope you enjoy the report and would welcome your feedback.

Also, if you wish to subscribe to my coronavirus e-mail list, simply send a blank e-mail to [email protected].

3) One of the reasons I’m bullish over a one-year horizon is that many macro factors are highly favorable. Here is an excerpt on this from part two of my report: “The Five Reasons We’re Bullish on Stocks Right Now”:

To be clear… we’re surely already in a recession and the damage is already significant.

It looks like Congress will soon pass a $2 trillion stimulus bill that President Donald Trump has promised to immediately sign into law, which will provide unprecedented fiscal stimulus. And if that proves insufficient, the government can easily borrow trillions more at minimal rates…

The Federal Reserve has dusted off the playbook it implemented during the global financial crisis and is injecting massive amounts of liquidity into the financial system. In particular, the stimulus bill includes $454 billion in funds for the Treasury to backstop emergency actions by the Fed. Since every dollar from the Treasury can stand behind $10 lent by the Fed, this translates into $4.5 trillion to keep credit flowing and make direct loans to U.S. businesses, in effect doubling the Fed’s current $4.7 trillion balance sheet…

And don’t forget that Trump views a recovery in stock prices as critical to his reelection hopes.

4) As further evidence that we’re in a world awash in liquidity, see this chart that Compound Capital Advisors CEO Charlie Bilello tweeted: 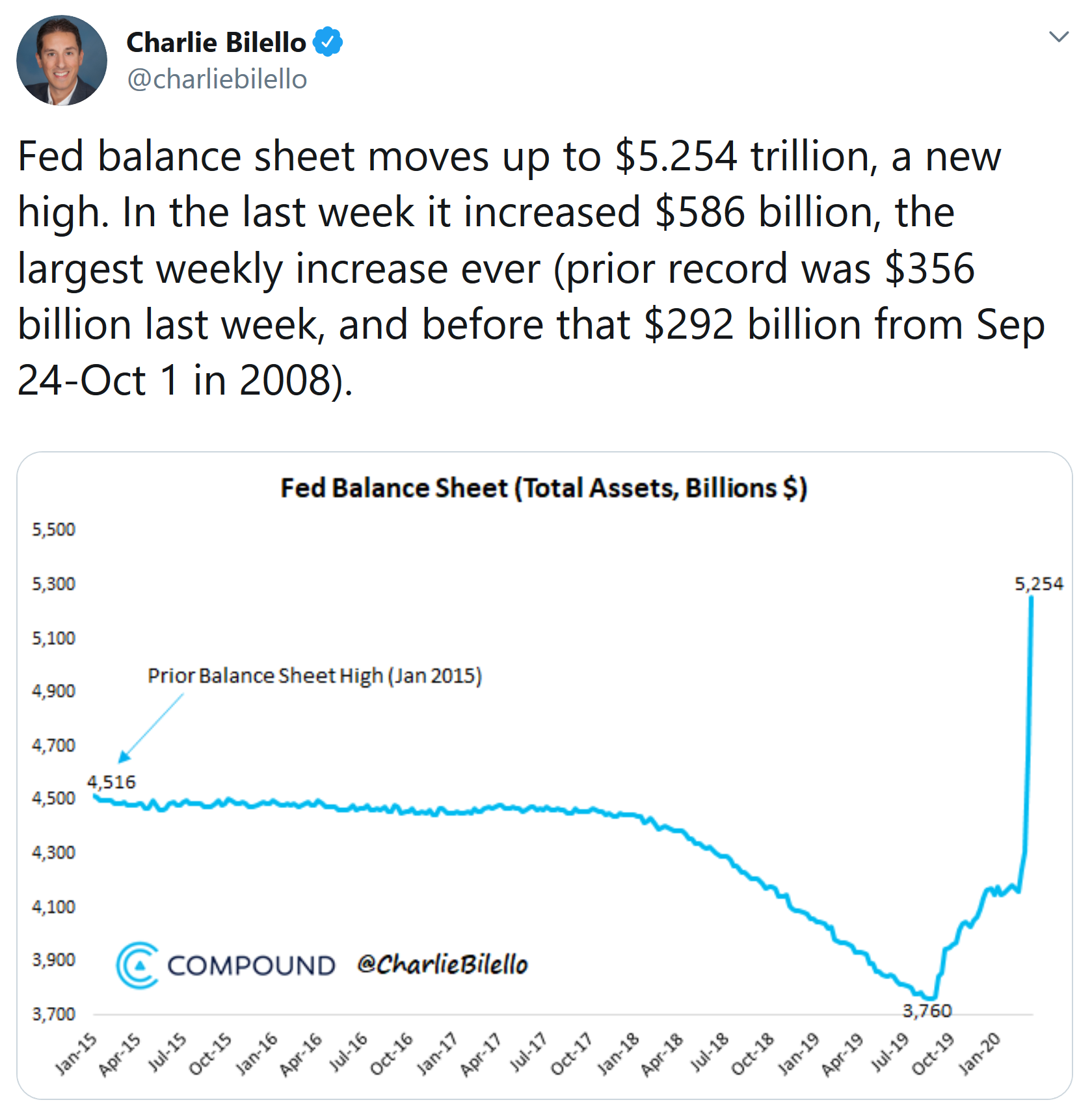 5) Alan Gula, a senior analyst at Stansberry Research, shared these comments with me yesterday and gave me permission to share them:

Funny how unlimited [quantitative easing] and a stimulus package equivalent to 10% of GDP (CASH CANNON) cause stocks to rise.

I agree with your assessment. There will likely be some sharp pullbacks, but I think they should be bought.

The credit markets remain open… 18 investment-grade issuers priced $35 billion across 33 tranches [on Thursday]. NVDA, HD, TGT, ED, CSX, MS, and CVS all issued bonds. Pessimists will say that these companies are just rushing to issue while they can. But I think the issuance is positive considering that we didn’t see this in late 2008.

Total U.S. corporate bond issuance was only around $80 billion in the entire fourth quarter of 2008. There was more investment-grade issuance than that this week.

And if investment-grade and high-yield spreads tighten, it will be bullish for equities. (I have long believed that the most important second-order effect of quantitative easing is spread tightening.)

Right now, high-yield sector spreads are all wider than 600 [basis points] (in particular, high-yield spreads in the energy sector blowing out to wider than 2,000 basis points shows devastation reminiscent of the global financial crisis).

6) Bill Ackman of Pershing Square Capital Management just made the greatest trade of all time (in my judgement – based on the percentage gain, dollar profit, the speed of the gain, and the perfect timing). He made almost a 100x return in less than two months, turning a $27 million investment into a $2.6 billion profit!

According to this letter he just released, earlier this year he became “extremely alarmed about both the health risks of the coronavirus and its economic impact.” To hedge his portfolio, he “purchased credit default swaps (CDS) on various investment grade and high yield credit default swap indices, namely the CDX IG, CDX HY, and ITRX EUR,” which “were trading near all-time tight levels of about 50 basis points per annum.”

Because we believed that the coronavirus could only be stopped in Europe and the U.S. with an unprecedented economic shutdown, based on what we learned from China, we were confident that U.S. and European credit spreads would likely widen substantially from their near-all-time lows.

In short, he saw exactly what was going to happen – and figured out the perfect way to profit from it.

Ackman has also made what I think will prove to be another brilliant move: exiting the hedge and plowing all of the gains into buying more of the stocks of the high-quality companies in his portfolio, whose stocks have all been whacked, including Berkshire Hathaway (BRK-B), Lowe’s (LOW), Hilton Worldwide (HLT), Agilent Technologies (A), Restaurant Brands (QSR), and Starbucks (SBUX).

He’s also investing some of his personal profits from this trade into addressing the crisis, as this article notes: Bill Ackman Puts Part of His Personal Fortune in Covid-19 Testing. Excerpt:

Bill Ackman said he has invested a portion of his personal wealth to help manufacture antibody testing kits produced by Covaxx, a newly formed subsidiary of closely-held United Biomedical Inc., amid the outbreak of the coronavirus.

Ackman has repeatedly called for a complete shutdown of the U.S. for 30 days to help combat the spread of the Covid-19 virus. He has also called for antibody testing, like the one Covaxx develops, across the country to determine who has [contracted] the virus.

“The key to a successful reopening beyond the maintenance of social distancing, hand washing, mask use and other related practices is a broad-based testing regime and tracing program,” Ackman said in a letter on Wednesday to investors in his hedge fund, Pershing Square Capital Management.

“This will enable the inevitable viral breakouts to be identified early and minimized with localized quarantines, reducing the impact on the overall U.S. economy and the need for future shutdowns,” he said.

(Full disclosure: I’m on board of Ackman’s Pershing Square Foundation, and look forward to helping him figure out the most impactful things the foundation can support!)

Lastly, in his letter he addressed the nonsense that when he went on CNBC a week ago Wednesday to frighten investors so the value of his CDSs would rise as he was selling:

I went on CNBC to further explicate my tweets, and to explain why I had gone from being very bearish to bullish…

My bullish posture and my statements on CNBC and Twitter were strongly supportive of the markets. I made those statements at the time we were buying stocks and reducing our short in the credit markets. My statements were therefore totally consistent with how we were trading. We had turned bullish and we were in the process of investing about $2.5 billion in equities. On the show, I made it very clear we were actively buying stocks in the market.

Importantly, our hedge had already paid off prior to my going on CNBC. In fact, we had sold more than half the hedge prior to the show, and the balance over the next three trading days. Our actual realized proceeds of $2.6 billion was equal to the total realized and unrealized profit we had already achieved prior to my going on CNBC. The hedge did not increase in value during or after I went on CNBC. It stayed at approximately the same value until we exited.

When I told my daughters about this trade over dinner recently, they asked, “Why didn’t you do that, daddy?”

I had to be honest with them: “Well, Bill’s a lot smarter than I am.”

We should all be asking ourselves the same question. Was it really so hard to see on February 19, only 37 days ago, when the S&P hit an all-time high and credit spreads were close to all-time lows, that the coronavirus might be a big problem?

With hindsight (which is always 20/20, of course), it shouldn’t have been hard to see at all, but I think we all got lulled into complacency by the long bull market…