Why there WON'T be a liberal landslide; Oil Crash Busted Broker's Computers and Inflicted Big Losses; Facebook Names the 20 People Who Can Overrule Mark Zuckerberg; Using a buff to cover my face

1) In my e-mails on Monday, Tuesday, Wednesday, and yesterday, I shared data about the coronavirus crisis, the economy, and the upcoming election in November and concluded that “every piece of evidence I can find points to another liberal landslide on November 3.”

Not surprisingly, I got lots of feedback. The problem is that most of it – such as “Joe Biden is a weak candidate” – wasn’t data-driven. I’m trying not to be partisan, so I want to focus on cold, hard data – like polls.

If you can’t find something to contradict your hypothesis, in any endeavor, you’re not trying very hard. It might also be a sign that you really need to expand the media sources you go to.

I don’t disagree. I have a very bad feeling about this fall and have ever since Trump has tied himself to an economy that was long in the tooth. I don’t like Trump but I do want limited government and free markets so he’s the only horse, as limp as it may be, that I have. Actually, I thought Trump would be more like a Democrat governing so I didn’t vote for him in 2016.

Regardless, there are some positives that Trump can look to:

1) Democrats aren’t excited about Biden. Yes, their utter hatred and suffering of Trump Derangement Syndrome (possibly more contagious than COVID-19) might be enough excitement, but we don’t know. Conservatives really disliked Obama but that wasn’t enough to get them excited about Romney.

Here’s an article about this, which has plenty of data: Joe Biden Has An Enthusiasm Problem. Excerpt:

A new poll from Emerson University released Tuesday found that while Biden leads Trump by 6 points, only 45% of Joe Biden’s supporters said they’re extremely or very excited to vote for him, while 55% said they’re only mildly or not that excited, a –10 point deficit.

Trump, meanwhile, enjoys much more excitement from his base, with 64% saying they’re extremely or very excited, compared to just 37% saying they’re mildly or not that excited.

These numbers come after a bruising primary battle between Biden and Vermont Senator Bernie Sanders, which pitted starkly different ideological visions for the party against one another.

Enthusiasm has been a persistent problem for Biden, with an ABC poll on March 30 showing that just 24% of Biden’s supporters are “strongly enthusiastic” about him compared to 53% for Trump.

Biden’s gap in enthusiasm is reminiscent of numbers that Hillary Clinton had in a November 2016 ABC poll, which showed Trump leading by 8 points among voters who were very excited about their candidate.

2) Republicans just took two seats in special elections, one in blue state California. Now reading much into this election is probably not worth much, but the same could be said of 2018.

3) I believe most Americans believe in fair play and don’t like to be played. I think between impeachment, overreach by governments in the lock down, and the possible issues coming from Biden (Obama/Biden using the NSA/FBI to target incoming administration, Biden and Co. in Ukraine and Russia, Biden’s tendency to smell people, and MeToo allegations) the American populace won’t want to follow who the media wants them to.

4) Lastly, for me today, the very graph you had in your email to show that Trump’s approval took a “hit” seems to support that he’s actually doing better than his first year in office. His disapproval is actually better than the beginning of the year. I wouldn’t be happy with 52% if I were him, but everything is relative. He must be either winning over people or at least moving people to neutral. Neutral people don’t go to the polls, especially if this disease is raging, to vote against someone.

As much as a “liberal wave” is a possibility I wouldn’t bet the house on it.

Midterm elections are inversely correlated with presidential elections. See Obama, Bush, Clinton, Reagan, etc… This is so well known that starting off with that discredits anything that follows in his argument.

Second, as I said the other day, if this were a normal economic crisis, then I would agree that Trump would be facing an uphill battle. It is not. Although the pandemic undoubtedly has economic consequences, this is perceived as a public health crisis, more like a war. The reaction of the voters is likely to be almost exactly the opposite in these situations – change is scary. And, if anything, the public mood and Biden’s announced positions are in favor of creating more economic damage not less. If the public gets tired of the lockdown and the economic consequences by election time, as I can only hope, they will likely not perceive Biden as the way out, but rather stick with Trump.

Third, in the last 60 years the Democrats that won the presidency were Kennedy, Carter, Clinton, and Obama (not counting Johnson because of the special circumstances). All young unknown outsiders with an exciting aura of new ideas and fresh thinking (at least at the time of the election). Add Joe Biden to that list and tell me which one doesn’t belong. He is an inside the beltway lifer who brings nothing exciting to the table.

Fourth, Joe Biden is brain dead. Although these circumstances reduce the cost of that massive flaw, it will become more apparent as non-focused voters listen to him for the first time. That has not yet happened so all polls are meaningless at this point. Right now, the polls are purely a reflection of Trump versus a generic Democrat, but once the campaign begins in earnest, people will start to focus on Biden.

Fifth, Trump is a once in a generation political animal and will find a way to resonate with voters on the fake impeachment, the Flynn witch trial, and the rest. And, he’s right on those points.

Sixth, Biden’s announced policies (green new deal, massive tax hikes) appear to be designed to repel voters in the swing states like Ohio, Michigan and Pennsylvania, so I think he will lose on the issues to the extent anyone cares about those anymore.

Thank you for the feedback! I haven’t changed my view that a liberal landslide is roughly 70% likely (versus betting sites around 40% likely right now), but I’ll be tracking this closely and will share my updated thoughts and investment implications over the next five-and-a-half months…

Syed Shah usually buys and sells stocks and currencies through his Interactive Brokers account, but he couldn’t resist trying his hand at some oil trading on April 20, the day prices plunged below zero for the first time ever. The day trader, working from his house in a Toronto suburb, figured he couldn’t lose as he spent $2,400 snapping up crude at $3.30 a barrel, and then 50 cents. Then came what looked like the deal of a lifetime: buying 212 futures contracts on West Texas Intermediate for an astonishing penny each.

What he didn’t know was oil’s first trip into negative pricing had broken Interactive Brokers Group Inc. Its software couldn’t cope with that pesky minus sign, even though it was always technically possible – though this was an outlandish idea before the pandemic – for the crude market to go upside down. Crude was actually around negative $3.70 a barrel when Shah’s screen had it at $0.01. Interactive Brokers never displayed a subzero price to him as oil kept diving to end the day at minus $37.63 a barrel.

At midnight, Shah got the devastating news: he owed Interactive Brokers $9 million. He’d started the day with $77,000 in his account.

“I was in shock,” the 30-year-old said in a phone interview. “I felt like everything was going to be taken from me, all my assets.”

These are a few of the newly announced members of the Facebook Oversight Board, the independent body that the social networking behemoth has launched to reconsider some of its most important content decisions. When the board rules whether to reverse Facebook’s takedown of user content – sometime this fall at the earliest – it will be the first time that anyone will have made decisions about Facebook that even Mark Zuckerberg can’t change.

Wednesday, we learned the names of the board members. It’s an impressive bunch who won’t necessarily feel beholden to the company whose processes they will be second-guessing. They won’t be quitting their day jobs – Facebook sees this as a part-time job. But they expect their participation to make a difference in the world.

“This is a historic moment,” says Kate Klonick, a law professor who has been closely following the creation of the board. “This is the first time a private transnational company has voluntarily assigned a part of its policies to an external body like this.”

4) I’ve been dutifully wearing a mask for the past couple of months, but have yet to find one I like.

The metal part that’s supposed to curve around my nose instead just hurts after a while… and so do the elastic straps around my ears. And what am I supposed to do with it if I want to eat or drink? On top of it all, it looks lousy as well.

Yesterday, I tried using one of my buffs (also known as neck gaiters) and loved it! I’ve seen plenty of folks wearing them, but the idea crystalized yesterday when I met up with John – one of the first responders from the Samaritan’s Purse hospital I volunteered at – and took him on a 14-mile bike tour of the city (we did the full loop of Central Park, then went down the river on the west side, saw the Intrepid, Hudson Yards, Times Square, Grand Central Station, and Rockefeller Center). Here’s a picture of us wearing our buffs (I pulled mine down only for a moment for the picture): 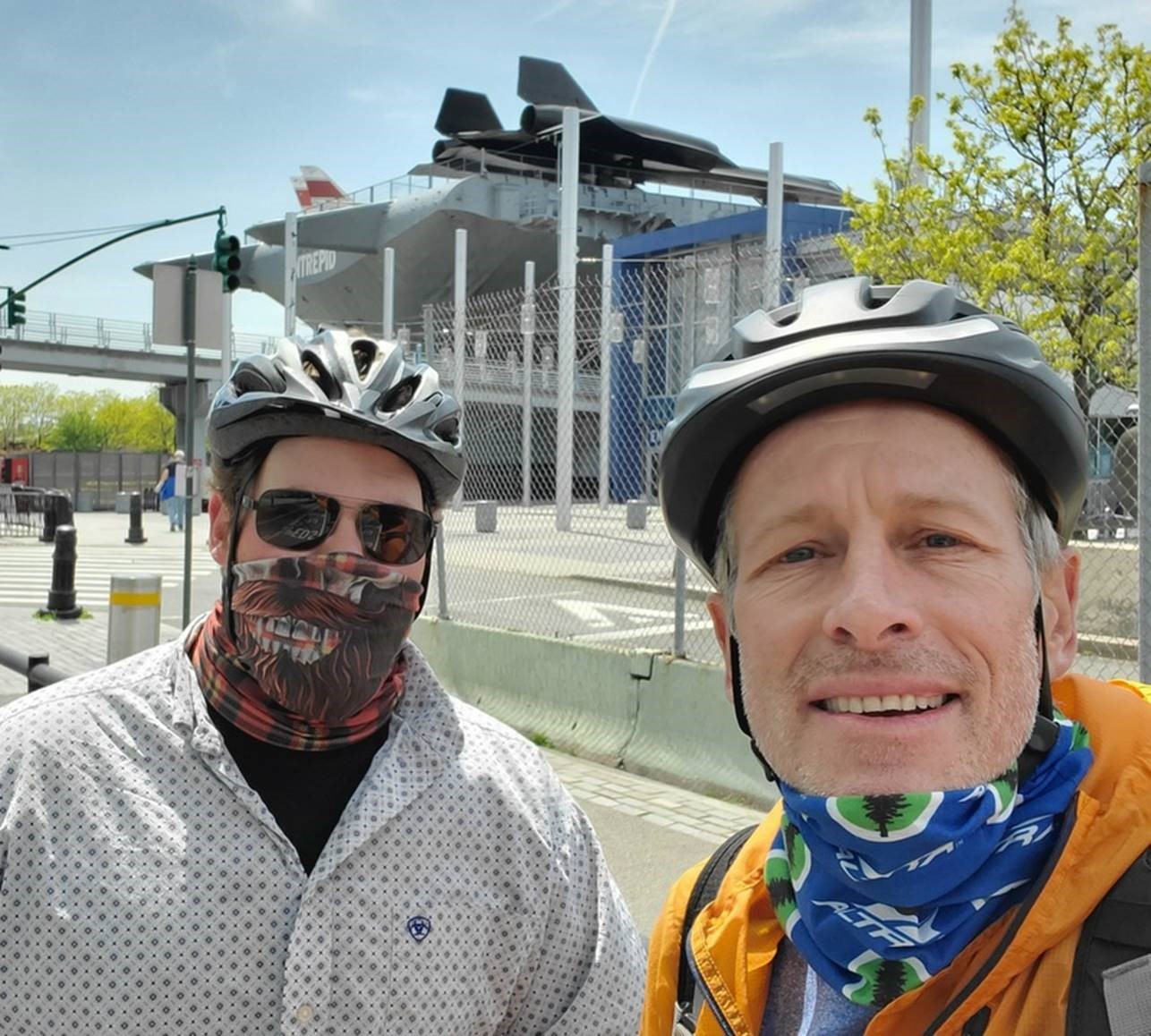 My buff was very comfortable, both when it was over my face as well as when I had it pulled down around my neck. It’s super easy to pull up and down as needed, it protected the back of my neck from getting sunburned, I could pull it up (even under my helmet) to cover my ears and/or head if I got cold, it’s easy to wash in the sink and dries quickly, and they come in lots of colors and styles (like this one, for those of you with a certain sense of humor!): 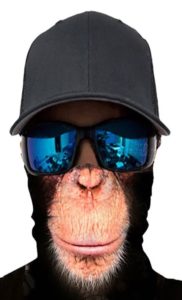 That said, there are some important caveats…

As this article (Neck Tubes and Scarves Are Not Ideal Face Masks) notes, buffs don’t block small particles. This means they aren’t as good as medical-grade face masks or N95 respirators, so should probably only be used for outdoor activities. They also need to be washed frequently to prevent them from becoming a den of bacteria. For more on the various types of masks, see: Preventing Coronavirus, Which Type of Mask Is the Safest?