Why stocks tanked on the rate cut; We look more like Iran than South Korea right now; How bad will coronavirus get?; Reported cases of coronavirus (and the change) by day in China; Pictures from the Streamsong Resort

1) Normally stocks rally when the Federal Reserve cuts interest rates, as it did yesterday… so why did the market sell off instead? My friend whom I quoted in Monday’s e-mail shared her thoughts with me again…

The 50 basis point cut obviously freaked people out because it makes you wonder what data the Fed has previewed that we haven’t seen yet. Such drastic action just leads people to panic about why they are bringing out their big guns.

The big mistake was cutting rates last year when the economy was just fine (absent some self-inflicted wounds due to the trade wars). Trump pressured the Fed to make unnecessary cuts for political not economic reasons. Now when they could use monetary stimulus, they are out of bullets. (Some will say that the Fed is theoretically arms-length from the President, but [Donald] Trump has a way of putting the screws to people like we have never seen before. This interpretation may be too political for some, but whether the mistake was [Jerome] Powell’s or Trump’s, I still think it was a mistake.)

The marginal utility of further cuts from very low absolute levels is open to question in general. Then, specific to this particular case, will lower rates get anyone who is scared of coronavirus to get on a plane or go shopping at the mall? I think not.

The problem at hand is not lack of available capital, which is why rate cuts won’t solve it. It’s primarily a consumer slowdown for an exogenous reason that has nothing to do with not having money to spend. And secondarily, it’s related to the interruption to supply chains that we will see in the coming weeks. This means that even if individuals and businesses have money burning holes in their pockets, the goods may not be available.

I know rate cuts have been a big part of the buy-every-dip strategy that has been so good for so long, but rate cuts don’t help with existential fear or broken supply chains.

I think the main tool left is fiscal stimulus, but this takes longer to implement, we’re constrained by high deficits due to the 2017 tax cuts, and Trump will have a tough time selling this within his own party.

Having a well-thought-out strategy to deal with the problem would help a lot, but we look more like Iran than South Korea right now in our level of preparedness. As NYU marketing professor Scott Galloway tweeted:

We charge patients $3,000 to be tested. Italy, China, South Korea test for free.

What could go wrong?

In addition, check out this Twitter thread from two days ago by a woman in Seattle who has “all symptoms of COVID-19 and a history of chronic bronchitis” and works in a “physical therapy clinic with many 65+ patients and those with chronic illnesses.” Clearly she’s someone who should be tested immediately so that, if she has coronavirus, she won’t infect her many high-risk patients. To her credit, she tried to do so, but got the run-around. She concluded:

The only way I can get treated is if my symptoms get so bad I develop pneumonia or bronchitis, which is very likely in my case. Then I’ll be in the ER and quarantined for several days while waiting for a test and for the results to come back.

This is all incredibly frustrating because I am trying to do everything right in a system that punishes moments of “weakness” like taking days off.

It’s also scary to know that I won’t be able to get help until I need life support.

To sum up: this is not contained. No one knows what the f**k is happening.

2) Everyone is looking for the answer on what will happen with the coronavirus: Will the outbreak ultimately fade with a whimper, inflicting less harm than the annual flu season? Or, at the opposite extreme, could it kill millions and paralyze the world?

One of my readers, Paul Chen, is cautious and is urging people to prepare for the worst. Here’s his analysis, which he gave me permission to share:

I did some research on a key metric for the seriousness of the virus: The R0 [reproductive number] for coronavirus on the Diamond Princess cruise ship was 2.28 according to this study, meaning each existing infection caused 2.28 new infections. This is around the midpoint of the Spanish Flu of 1918, which had an estimated R0 of 1.4-2.8. It killed roughly 30 million people worldwide, equal to 1.7% of the world’s population at the time.

Even if the coronavirus is only 1% as deadly, that would still be more than 1.3 million deaths from the virus worldwide…

I think your estimate will prove to be off by 1,000 times or more because all of your inputs are based on preliminary numbers from China – when China was caught napping… and the rest of the world isn’t China… and we’re not in the middle of a global world war, as we were in 1918… and sanitation and health care are vastly better than a century ago…

3) Another reader sent me a spreadsheet with the number of reported coronavirus cases in China by day, which I used to make this chart: 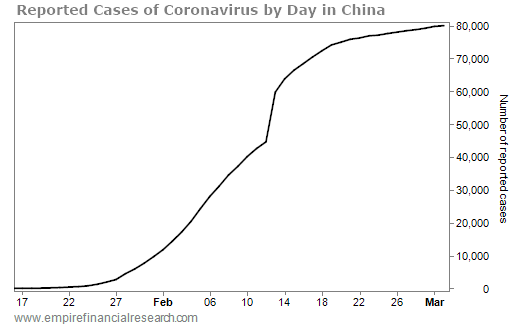 At first glance, this chart appears frightening, with ever-increasing numbers of cases. But then, using the exact same data, I created this chart showing the change in the number of reported cases each day… 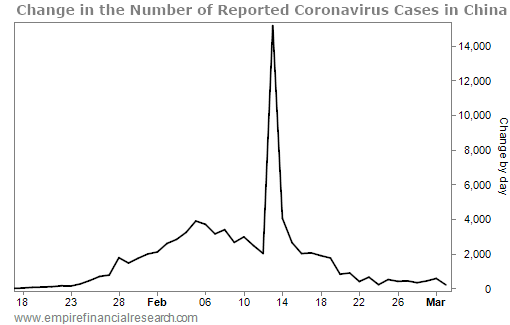 Other than a big spike on February 13, this shows a very different picture: that China has gotten a handle on this epidemic (unless it’s completely falsifying its numbers, which is always possible)…

However, as another friend noted, “China achieved this result by shutting down the economy. Now that they are gearing up, I would expect the case load to increase.”

To which I replied,

That’s the key question: now that the Chinese population is scared and taking precautions, can they return to some semblance of “normal” while keeping coronavirus under control? I would bet that the answer is yes…

Do you trust the Chinese data? The bigger danger is that we still don’t know enough about the virus to know what this data is really telling us.

It does appear that the Chinese measures have been successful at containment. The story now shifts to all the other countries. How many are going to implement the same policy? How many are even testing? In the U.S., first responders are getting sick. What does this mean for our first response systems?

The market clearly is not happy. What is it trying to tell us about the economic damage, both to date and in the future?

I want to thank all of my friends for their insightful comments.

To summarize my thoughts, if one were to create a scale of 0 to 10 to measure the ultimate impact of the coronavirus – in which a 0 is that the outbreak quickly fades away and a 10 is millions of deaths worldwide – my bet would be that it ends up at a 3.

In this scenario, further coronavirus cases will be identified in the U.S. and Europe, but the outbreak won’t reach the crisis proportions that it did in China… the Tokyo Olympics will go ahead as planned… a vaccine will be developed… and this will soon fade from investors’ memories.

If I’m right, then I suspect that most of the impact is already priced into stocks, which means it’s a good time to be putting money to work – albeit carefully and selectively.

4) I’m at the annual Stansberry Research Editors’ Conference, which is at the Streamsong Resort in Florida, just over a one-hour drive from Tampa. It’s known for its three world-class golf courses, which I didn’t have a chance to play on because: a) I need to get a lot of work done so I can enjoy skiing at Grand Targhee and Jackson Hole for eight days, starting on Friday (I know, it’s a rough life I lead, but someone’s gotta make the sacrifice… Special thanks to my endlessly patient wife of 26-plus years!)… b) the last thing I need is more strain on my elbow, which is already aggravated by too much tennis and climbing… and c) I’m a terrible golfer, lucky to break 100 on a good day…

Here are three pictures I took around the resort at sundown… 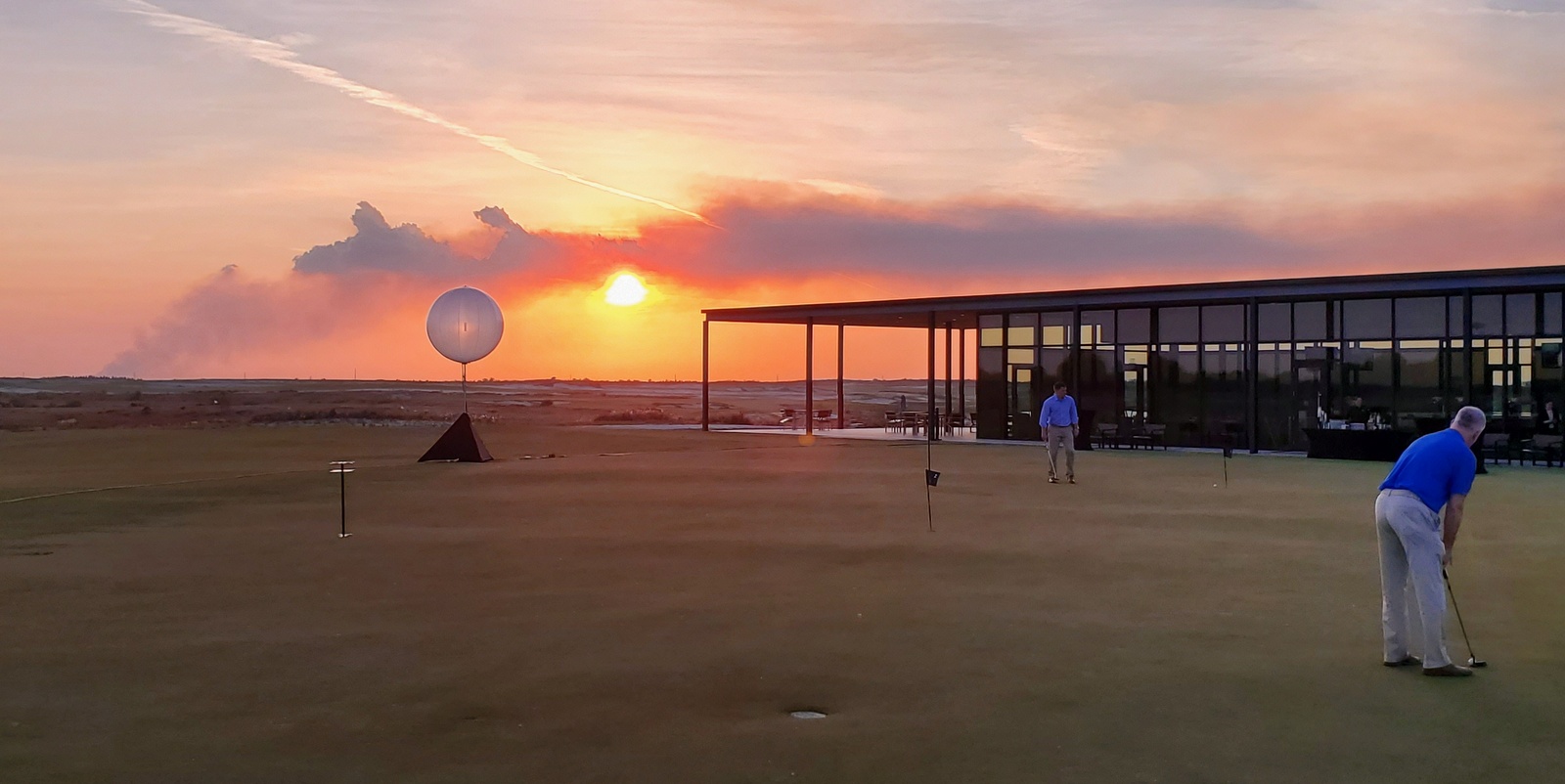