Why Markets Boomed in a Year of Human Misery; Two Worlds: So Much Prosperity, So Much Skepticism; My dad on hearing aids

1) To understand where markets are likely to go from here, it’s critical to understand Why Markets Boomed in a Year of Human Misery, which is also the title of a fascinating recent New York Times article.

My colleague Berna Barshay wrote about this in her Empire Financial Daily on Thursday: How the Pandemic Chose Its Haves and Have-Nots. I recommend reading her take as well as the original NYT article. Here’s an excerpt from the NYT:

To better understand this strange mix of buoyant markets and economic despair, it’s worth turning to the data. As it happens, the numbers offer a coherent narrative about how the United States arrived at this point – one with lessons about how policy, markets and the economy intersect – and reveal the sharp disparity between the pandemic year’s haves and have-nots…

By combining the numbers from March through November (the latest available), and comparing them with the same period in 2019, we can see more clearly the pandemic’s whipsaw effects.

The first important observation: Salaries and wages fell less, in the aggregate, than even a careful observer of the economy might think. Total employee compensation was down only 0.5% for those nine months, more akin to a mild recession than an economic catastrophe.

That might seem impossible. Large swaths of the economy have been shut down; millions are out of work. The number of jobs employers reported having on their payrolls was down 6.1% in November compared with a year earlier, according to separate Labor Department data.

So how can the number of jobs be down 6% but employee compensation be down only 0.5%? It has to do with which jobs have been lost. The millions of people no longer working because of the pandemic were disproportionately in lower-paying service jobs. Higher-paying professional jobs were more likely to be unaffected, and a handful of other sectors have been booming, such as warehousing and grocery stores, leading to higher incomes for those workers.

The arithmetic is as simple as it is disorienting. If a corporate executive gets a $100,000 bonus for steering a company through a difficult year, while four $25,000-per-year restaurant workers lose their jobs entirely, the net effect on total compensation is zero – even though in human terms a great deal of pain has been incurred.

So wages, salaries and other forms of workers’ compensation dropped only a little – $43 billion over the nine months – despite mass unemployment.

And that’s not all…

When it’s all tallied up, Americans’ cumulative after-tax personal income was $1.03 trillion higher from March to November of 2020 than in 2019, an increase of more than 8%. Some of the pessimism among economic forecasters (and journalists) in the spring reflected a failure to understand just how large and influential those stimulus payments would turn out to be.

But income also is only part of the story. Big changes in 2020 also took place on the other side of the ledger: spending…

Not only were American households, in the aggregate, taking in more money, but they were also spending less of it. Total outlays fell by $535 billion.

This combination of soaring personal income and falling spending pushed Americans’ savings rate through the roof. From March through November, personal savings was $1.56 trillion higher than in 2019, a rise of 173%. Normally the savings rate bounces around in a narrow range, around 7% just before the pandemic. It spiked to 33.7% in April, its highest level on record dating to 1959.

Even as millions of individuals faced great financial hardship this year, Americans in the aggregate were building savings at a startling rate. It had to go somewhere. But where? Holding on to extra cash was one option – and sure enough, currency in circulation has spiked by $260 billion since February, a 14% increase. Deposits in commercial banks are way up – by 19% since the first week of March.

Or, for those a little more comfortable with risk, there was investing in stocks, which helps explain the 16% rise in the S&P 500 for the year. For those comfortable with a lot of risk – and with taking advantage of the market’s momentum – there was buying a market darling stock like Tesla or trading options.

Or you could have used the occasion of the pandemic to buy a new house: Home sales surged, and the S&P CoreLogic national home price index was up 8.4% in October from a year earlier.

Essentially, the rise in savings among the people who have avoided major economic damage from the pandemic is creating a tide lifting the values of nearly all financial assets.

Certainly the Federal Reserve plays a role. The central bank has lowered interest rates to near zero; promised to keep them there for years; bought government debt; and supported corporate bond markets. But the surge in asset prices has made its way into many sectors far from any form of Fed support, like stocks and Bitcoin.

2) On the same topic, blogger and venture capitalist Morgan Housel, author of the outstanding book, The Psychology of Money: Timeless Lessons on Wealth, Greed, and Happiness, shares his take on what’s going on here: Two Worlds: So Much Prosperity, So Much Skepticism. Excerpt:

That’s where we are with COVID and the economy. Ten months after the surprise of our lifetimes, everyone wants a clear map of the future. Who wins? Who loses? When will travel recover? Will work be the same? Have we learned our lesson?

But the most important economic stories don’t require forecasts; they’ve already happened. And they tend to be the most overlooked, because when everyone’s focused on the future it’s easy to ignore what’s sitting right in front of us.

I want to tell you two of the biggest economic stories that aren’t getting enough attention.

One is that household finances might be in the best shape they’ve ever been in. Ever. That might sound crazy, and it’s easy to overlook because of the second story: COVID has dumped kerosene on wealth inequality in ways we’ve yet to fully grasp.

As Housel explains, last year was the best year for income in U.S. history…

A lot of the surge came from stimulus payments and unemployment benefits. But private wages and salaries are back at a new high. So are average hourly earnings. And weekly earnings.

Add it all up, and total monthly debt payments as a share of income are now the lowest they’ve been on record, going back more than 40 years. In the last decade they’ve dropped from more than 13% of income to less than 9%.

When income is replaced with stimulus checks but spending doesn’t rebound, savings surges.

The personal savings rate averaged 7% in the quarter-century before 2020. Then COVID hit, and overnight it went to 34%. It’s since dropped to about 14%, which would have been a 50-year high before COVID.

Rising income inequality has been one of the most important stories of the last four decades. Then COVID hit, and the trend was fed rocket fuel…

Consumers – in aggregate – are in the best shape they’ve ever been in.

But the distribution of that prosperity has never been more extreme.

Household wealth surged to a record high during the pandemic

There are 9 million fewer jobs today than a year ago, a decline of around 6%. But for those earning more than $28 per hour, the job market has fully recovered, like the recession never happened. For those earning less than $16 per hour, one-quarter of the jobs are still gone, which is on par with the 1930s.

He finally found hearing aids he likes, so I asked him to share his experience. He writes:

Over the past decade I have tried many hearing aids ranging from $5,000/pair with full ongoing professional support to various models you can buy on Amazon for $200/pair. I have finally found a hearing aid that I really like: the Signia Silk.

They’re completely in-the-canal (“CIC”), very small, and almost invisible (below are pictures in my ear and next to my pinky). They fit comfortably and securely in the ear and do a good job of amplifying sounds. For the first time, I always wear my hearing aids because I can really tell the difference.

I decided to purchase them online for about half the cost of the full professional option: about $2,500 for both. I bought them on the OnlineHearing website (ask for Matt).

I got an audiogram from a professional audiologist, which I then sent to OnlineHearing, which then custom programed each hearing aid, which arrived a few days later.

An audiologist from Phoenix named Dr. Cliff has many valuable YouTube presentations on hearing aids. He says to stay away from online providers, which is probably good advice in general, but I’m happy with OnlineHearing. 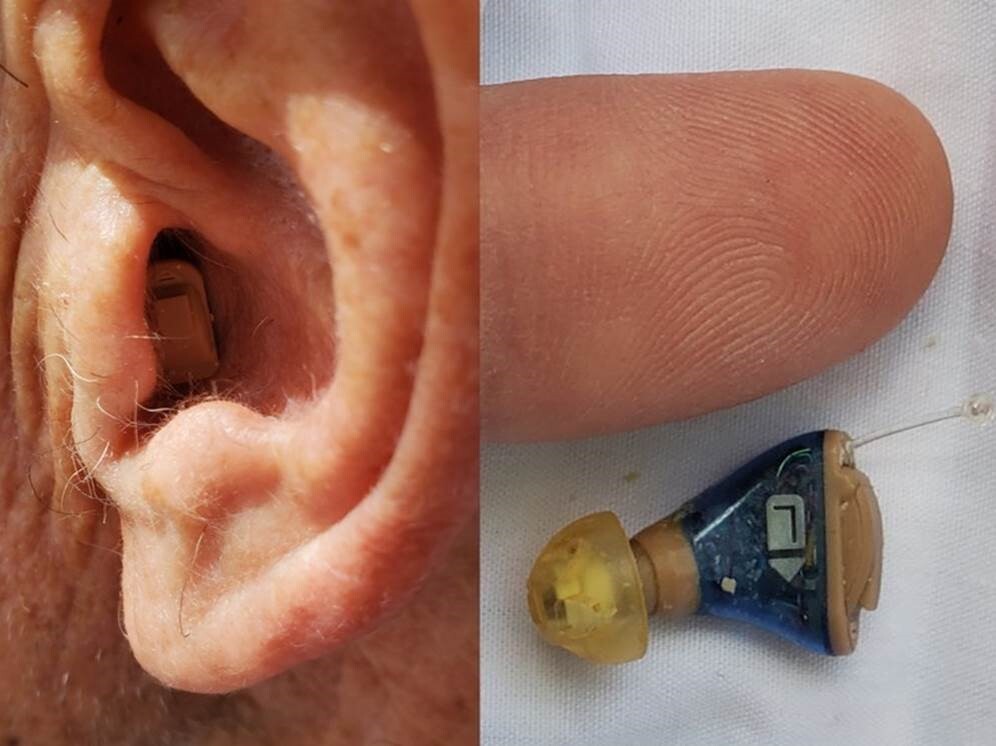