1) As the world reopens, investors are breathing a sigh of relief and stocks are rallying. This raises the question: is the bull market we're in right now likely to continue?

In Thursday's e-mail, I shared my colleague Enrique Abeyta's bullish take, in which he concluded:

So, to me, the stock market right now is really just a two-factor model – sequential numbers (which are going up) and increasing money supply (which has skyrocketed).

This reminds me a lot of what happened after the Long-Term Capital Management crisis back in 1998. As you can see in the chart, the Fed stepped in with liquidity to get us through that, but then kept the gusher flowing because of Y2K concerns.

Right now the Fed is gushing money like Niagara Falls, which makes LTCM/Y2K look like a water fountain...

Until these two factors flatten and/or decline, the direction of the stock market is higher. Maybe a little, maybe a lot – but higher either way.

Today, I'd like to share the reasons why, as the market steadily rises, I'm steadily becoming more cautious.

2) One obvious reason, of course, is that price matters.

A few weeks ago, I thought the market might rise 10% by year end – and now, here we are, having nearly achieved that already!

By almost any measure, U.S. stocks are pricey, as this Wall Street Journal "Heard on the Street" column highlights: It's No Optical Illusion – U.S. Stocks Really Are Expensive. Excerpt:

The S&P has now climbed back to where it was at the end of October. Back then, expected earnings over the following 12 months were about 25% higher than now, putting the index's forward P/E at 17.4 – still on the expensive side.

Even if the earnings lost as a result of the pandemic are temporary, they still count as losses. The profits one would expect companies to earn over the next decade are lower now than before the novel coronavirus took hold. So while basing the level of a stock index on a P/E ratio distorted by a crisis like the pandemic is shortsighted, the level of stocks really should hew to what is expected over several years, which is now meaningfully lower.

Moreover, it will probably take more than a year for profit levels to bounce back. Wall Street analysts tend to be optimistic about earnings at the companies they follow, and their estimates veer more toward a V-shaped recovery in the economy than the more drawn-out affair many economists are penciling in. Even so, they don't think profits will return to last year's level until 2021. Since the end of October, their forecast for the S&P 500's earnings next year has fallen by 17%.

If the market's rise was accompanied by unexpected great news, that would be one thing, but I'm not seeing that...

3) One of the most important factors driving stock prices is our progress in the war against the coronavirus. (If you wish to subscribe to my coronavirus e-mail list, simply send a blank e-mail to: [email protected])

On this front, we have made real progress, to be sure: testing is up... and cases, hospitalizations, and deaths are down. We have definitely flattened the curve.

But we're not crushing the virus the way so many other countries have. Look at this chart posted by Yale professor Howard Forman that shows Italy's new cases since the peak two months ago – they've fallen by more than 90%: 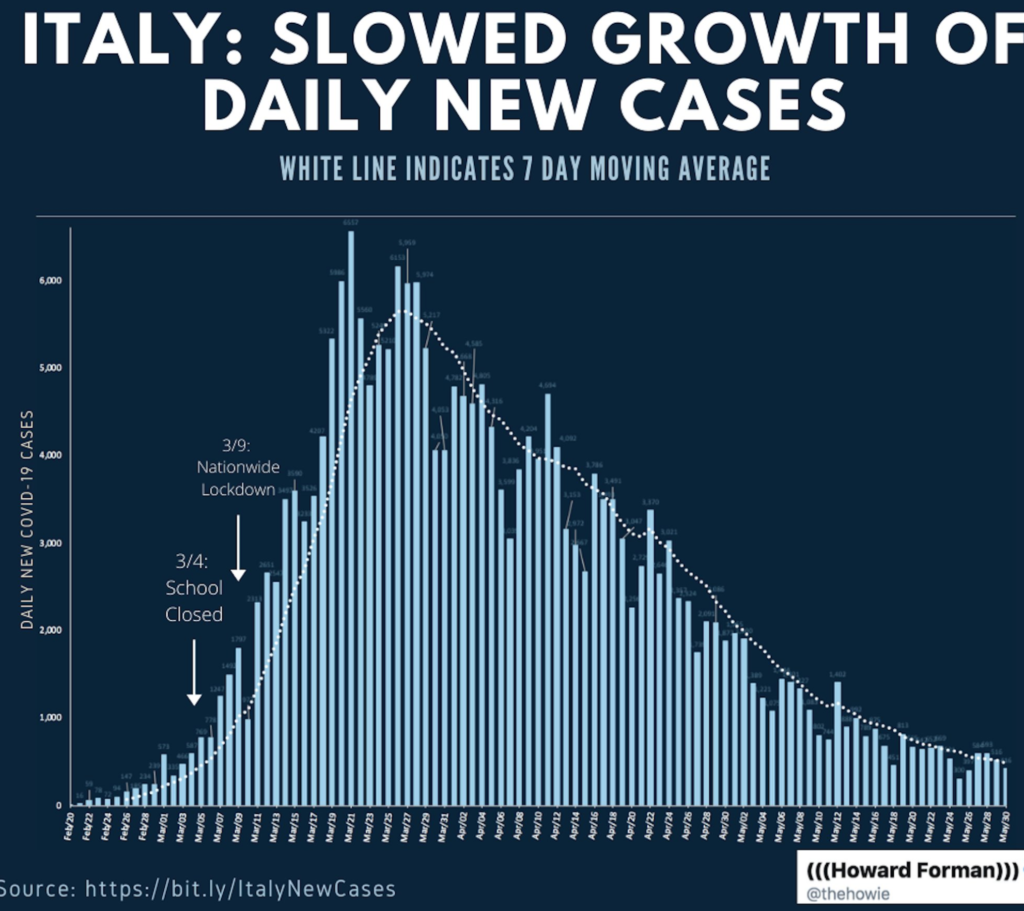 Here are similar charts for Spain, the U.K., France, and Canada – and let's not even talk about Germany, China, South Korea, Taiwan, Israel, Singapore, and Hong Kong...

These countries show what crushing the virus looks like.

Now take a look at the same chart from Forman that shows the U.S. (excluding the "four early dominant states" of New York, New Jersey, Connecticut, and Massachusetts – all of which have seen steep declines): 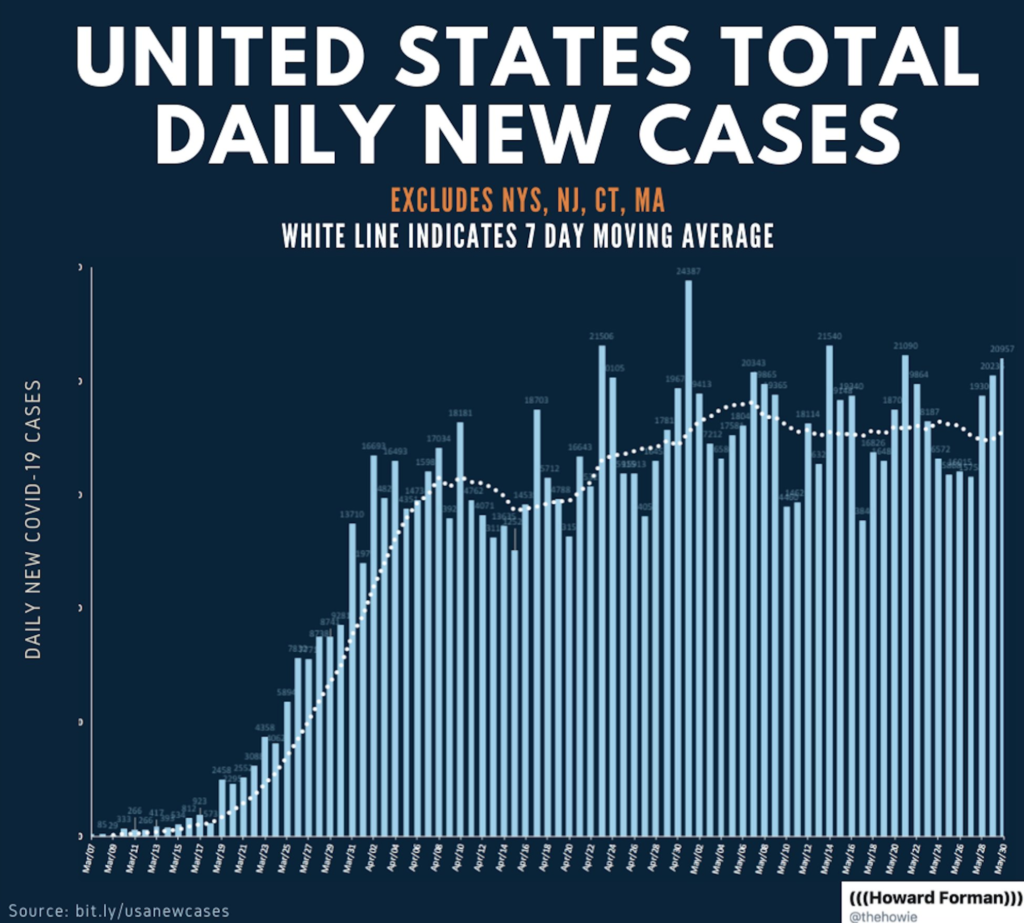 Forman concludes, correctly I think, that "If we can not tamp this down during the summer months, we will be in trouble in the fall."

In the weeks since America began reopening on a large scale, the coronavirus has persisted on a stubborn but uneven path, with meaningful progress in some cities and alarming new outbreaks in others.

A snapshot of the country on a single day last week revealed sharply divergent realities. As the United States marked the tragic milestone of 100,000 deaths from the coronavirus on Wednesday, the contrasting picture was unmistakable – a murky, jumbled outlook depending on one's location.

Around Chicago, Wednesday was one of the most lethal days of the pandemic, with more than 100 deaths. Among the dead: a woman in her 30s, and four men past their 90th birthdays.

In the Boston area, where an alarming crisis of a month ago has given way to cautious optimism, businesses were reopening that day and new cases numbered in the dozens, no longer the hundreds.

Around Rogers and Springdale in northwest Arkansas, which the virus had barely touched in the pandemic's early weeks, poultry workers spent part of Wednesday planning a protest as outbreaks in at least two plants were driving a sudden surge in infection numbers.

The dizzying volatility from city to city and state to state could continue indefinitely, with vastly different policy implications for individual places and no single, unified course in sight.

Some states are seeing vast improvements. But as the pandemic progresses, parts of the country may eventually need to reimpose restrictions, Dr. Tom Inglesby, the director of the Center for Health Security at Johns Hopkins University, said.

"The country is divided in terms of its overall trajectory," Dr. Inglesby said. "This virus is persistent. It hasn't changed."

5) In light of this mixed progress fighting the virus, it's hard to see the U.S. reopening quickly, leading to a V-shaped economic recovery.

This is reflected in the latest forecast from the Congressional Budget Office: U.S. Economy Faces Long Recovery From Coronavirus Effects, Experts Say. Excerpt:

The U.S. economy could take the better part of a decade to fully recover from the coronavirus pandemic and related shutdowns, a U.S. budget agency said, as a series of surveys pointed to continuing weakness in global manufacturing.

The Congressional Budget Office, a nonpartisan legislative agency, said the sharp contraction triggered by the coronavirus caused it to mark down its 2020-30 forecast for U.S. economic output by a cumulative $7.9 trillion, or 3% of gross domestic product, relative to its January projections. GDP isn't expected to catch up to the previously forecast level until the fourth quarter of 2029, the CBO added.

The roughly $3.3 trillion in stimulus programs enacted by Congress since March will only "partially mitigate the deterioration in economic conditions," the CBO said.

"After you get the initial bounce of economic activity simply from removing the lockdowns, I think what we'll see is an economy that is running at a level of activity notably below where we were prior to COVID," said Michelle Meyer, chief U.S. economist at BofA Merrill Lynch. "It's going to take a long time to heal. There will be scars as a result of such a painful shock of the economy."

6) This in-depth look at Texas' reopening hints at a slow recovery: Texas Is Showing the World How to Reopen Cautiously. Excerpt:

A month into the reopening of one of America's biggest economic engines, Texas looks a lot like those other Houston watering holes: cautiously coming back from the shutdown. Using a variety of data measuring all kinds of activity – from dining out to how frequently people leave their homes – a picture of the Lone Star State emerges that raises doubts about the pace of the economic recovery. For months, the big question has been how quickly Americans will bounce back. Looking at Texas, the answer is that it's going to be a while.

This market isn't quite as utterly crazy as it might look at first. But it is priced for perfection amid conditions of extreme uncertainty, and risks are almost all to the downside. The most likely way for this disconnect to be resolved is by share prices falling again. Let us all hope that it is resolved by a swifter recovery from the lockdown conditions and in the economy, than anyone now thinks possible, ideally coupled with a historic resolution of America's deep problem of racial injustice. The latter alternative looks less likely.

I'm hoping for the best-case scenario in the near term – and, long term, I remain bullish on the U.S. – which is why 65% of my savings are invested in mostly blue-chip U.S. stocks right now. But that also means I'm holding 35% in cash, ready to put to work if markets take another tumble.