Why I'm happy about the market's decline; Stocks Have Been Falling. I'm Still Buying Steadily; How to invest your savings wisely; My colonoscopy

1) The wild, mostly downward swings in the markets this year have spooked a lot of investors, but I continue to view the turmoil as good news.

I'm glad I put a good chunk of my cash to work over the past week. As I've argued in my recent dailies, it smells like a bottom, but in truth I don't really know (or care).

Like the vast majority of Americans, I'm still in my working years, so I won't need to touch the money I'm investing for many years – even decades.

Thus, the 17.1% decline this year in the S&P 500 Index and 25.5% drop in the Nasdaq simply means that I'm able to buy more shares of high-quality businesses than I was a few months ago. That's great news!

If you are a long-term investor, you may not want to look at your portfolio right now. The numbers may be unnerving.

But I have no choice. I look closely at this data all the time as part of my job, not just at the overall markets but at my own returns from a portfolio made up overwhelmingly of low-cost, diversified index funds that track the total stock and bond markets. What I'm seeing is ugly.

What am I doing about it? Buying more stocks and bonds through index funds.

This isn't an attempt to make a smart bet that the stock market has already bottomed and is about to start a powerful rally. I have no idea if any of that is true. I'm just continuing with investments I've been making for decades, despite the market's often obnoxious behavior. My long-term investment numbers are pretty good, even though the short-term results are painful...

What I'm about to recommend makes sense only if you are able to engage in a consistent investment plan with a long horizon.

But, yes, if you clear all those hurdles, I do think this is a perfectly good time to put money into stocks as well as bonds, which have also declined in value this year. And unless I really needed the money now, I wouldn't sell. I would buy.

Note, though, that I also believed that last year, when the current downturn was months away. That's because, as I see it, investing in the stock market is a long-term endeavor that involves some risk. Where the market is heading day to day has nothing to do with it. If anything, the current market decline is an opportunity for those who can handle it.

3) And here's an excerpt from my latest book, The Art of Playing Defense, on this topic:

Once you've developed good financial habits and are saving money every year, you need to invest your savings wisely.

The good news is that it's not hard.

First, max out your retirement plan(s) like an IRA or 401k – especially if your employer will match at least some portion of it (this is free money – take it!). Tax-deferred savings are much more valuable than taxable ones because you won't have to pay taxes on your realized gains each year. The difference over time is enormous. Also, because there's a penalty for taking the money out before you're 65 years old, you're less likely to do something stupid with it.

Ideally, set up automatic withholding from your paycheck into your IRA (or another retirement fund) – this makes it easier to save because you never see the money.

Then, set up a plan such that the moment the money hits your account, it's automatically invested in an S&P 500 index fund. (If you want to set aside some money to invest on your own, that's fine – sign up for my newsletters at Empire Financial Research to help you do so – but index most of it.)

Finally – this is key – don't look at it! Just let it build, year after year, decade after decade. Whatever you do, don't panic during times of market turmoil and sell – just about everybody who does this has terrible timing, selling at exactly the wrong time (for example, in March 2009 or 2020).

Consider the extreme case of my sister, who had a retirement account at her old employer, then switched jobs – and forgot about it! Years later, she remembered it – and discovered hundreds of thousands of dollars (!) because she'd done everything right up front: her employer automatically withdrew the maximum retirement contribution from her paycheck and then invested all of it in an S&P 500 index fund.

When my parents moved to Africa 24 years ago, first to Ethiopia and then, nine years later, to Kenya, where they've since retired, I took charge of their financial affairs. Though neither of them had ever had a big salary, they had both worked for their entire careers, earned decent incomes, and lived super frugally. As a result, they had built up a nest egg of around $800,000.

But they were much too conservative in how they'd invested it. Though they were still in their mid-fifties and would likely work another 15 years and live into their nineties, their savings were mostly in cash and bonds – an allocation more appropriate for eighty-year-olds.

It was the right call. Two decades later, they're in their late-seventies, and their net worth is multiples of what it once was. They're comfortably retired – though you wouldn't know it from how frugal they still are. When they came back to the U.S. for a couple of months last summer, as they do every year, my mom refused to get a SIM card for her Kenya cell phone that would allow her to make and receive calls, get her email, etc. because it cost too much: one dollar per day!

4) I had my second colonoscopy recently and all is well. As with my first one five years ago, the doctor found and removed a small polyp, so I appear to be on the five-year (rather than the usual 10-year) schedule...

Here's what I wrote in my book about the importance of getting this done:

Colon cancer is the second leading cancer killer (after lung cancer). Caught in the first or second stage, nine out of ten people will survive at least five years. But if it's not caught until stage four, only 10% of people survive five years.

Early screening is the best way to mitigate the risk, but many people put it off. Consequently, 60% of colon cancers are detected in a late stage.

The primary reason people don't get a colonoscopy when they should is that it's unpleasant. You have to drink a massive amount of nasty-tasting liquid that induces diarrhea to clean out your system. Then you have to go to a hospital or clinic and get knocked out with anesthesia before they put a scope with a camera up your butt. Not surprisingly, many people (especially men) feel squeamish about it.

The result, however, is that most people who get colon cancer don't realize there's a problem until they see blood in their stool. At that point, it's generally in stage four, and little can be done.

So get a colonoscopy when you turn 50! [The recommendation was lowered last year to 45.] I can say from experience that it's no fun, but it's worth it. During my first colonoscopy a few years ago, they found and removed a precancerous polyp, which means I need to go back for another one in five years, not 10.

The prep wasn't as unpleasant this time because rather than having to "drink a massive amount of nasty-tasting liquid," I just had to drink one of these bottles the night before and one the morning of, which tasted a bit like Gatorade: 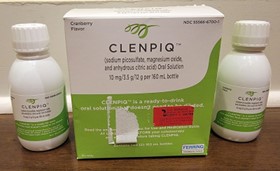 The procedure itself was painless – the anesthesiologist knocked me out and 20 or 30 minutes later I woke up feeling fine and was soon on my way home: 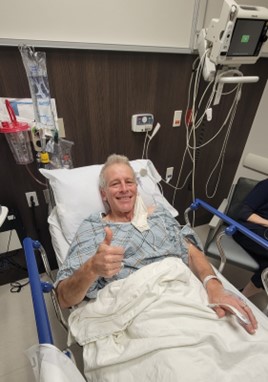 If you want to see the report from the doctor, I've posted it here. (Warning: it contains six images from the procedure, which grossed a lot of people out when I shared similar images five years ago.)

I'm sharing it, however, because I think it's important to remove the "ick" factor from this procedure, which is why so many people don't get it (and some die as a result).