Why I think META is at an inflection point (part 2); An Overhyped AV Developer Implodes; Climbing in Red Rock Canyon and Elton John concert in Las Vegas

1) In yesterday's e-mail, I analyzed Meta Platforms' (META) history – highlighting how it's one of the world's greatest businesses, but has also struggled recently... with its first two quarters of declining year-over-year ("YOY") revenue and shrinking margins, which led to a 52% decline in net income in the third quarter.

But as I concluded:

Investors – as they usually do – are projecting the recent trends indefinitely into the future, which is why the stock has sold off so much... But I think they're making the classic mistake of driving with their eyes firmly affixed in the rear-view mirror.

As I instead look through the windshield, I see a bright future for Meta...

When looking at any turnaround situation, the key question is whether the business is permanently impaired and destined to decline into oblivion (secular problems), or whether it has been impacted by short- to medium-term issues that can be fixed and/or will fade once tough YOY comps dissipate (cyclical problems).

While not dismissing the real issues Meta faces – most notably, the rise of TikTok and the wild overspending on the metaverse, which I will discuss in tomorrow's e-mail – I'm convinced that the great majority of the issues plaguing the company in recent quarters are cyclical.

Yet the consensus view among investors is the opposite, which is why the stock has crashed by 76% from its peak and has hit a seven-year low. Once investors realize their mistake, META shares are likely to rip...

Today I want to examine one of the major issues facing Meta, slowing revenue growth, and discuss the other issues in future e-mails...

As this chart in yesterday's e-mail shows, Meta's growth has been slowing for years and turned negative the past two quarters: 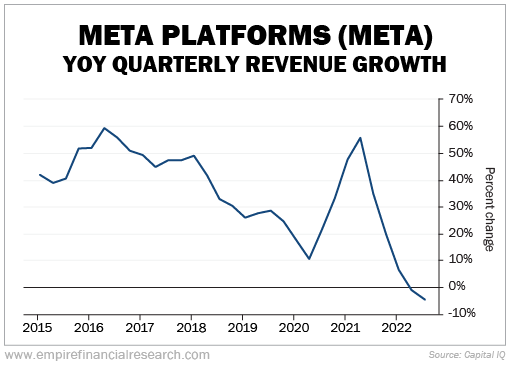 If you put a trend line on that chart, it would appear that Meta is going to start shrinking rapidly, but this is nonsense. It's important to keep a few things in mind...

First, it should be no surprise that Meta's growth is slowing given that 62% of every adult on earth already uses one of Meta's products every month – and nearly half use one every day.

But slowing growth doesn't mean a decline. In fact, as I wrote in yesterday's e-mail (supported by two charts), "Meta is not losing users – its numbers continue to grow (albeit slowly)..."

Second, obviously Meta's YOY growth looks especially bad over the past year because it's being compared to the huge spike that occurred during the pandemic. We're seeing this occur at all sorts of businesses that boomed during the pandemic. For example, here's the YOY revenue growth for Zoom Video Communications (ZM): 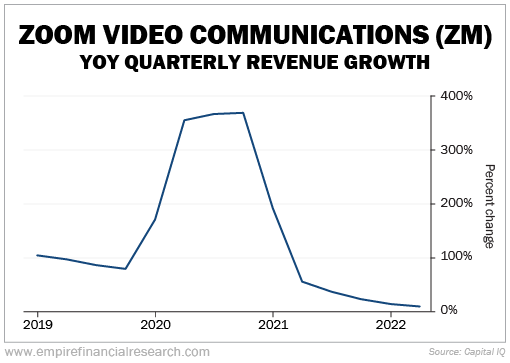 And here's what it looks like for Peloton Interactive (PTON): 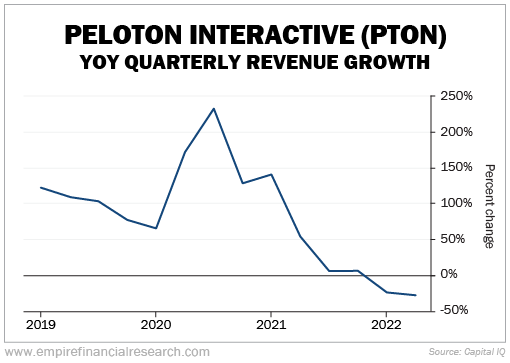 Finally, keep in mind that Meta's revenue in the third quarter was substantially impacted by the strong dollar, which cost the company $1.79 billion on the top line. On a constant currency basis, Meta's revenue, rather than declining 4%, would have risen 2%.

Nearly all of Meta's revenue is a function of two things: the number of users (discussed above) and the average revenue the company generates from each, a measurement called average revenue per user ("ARPU").

This chart shows Meta's ARPU going back to the beginning of 2010: 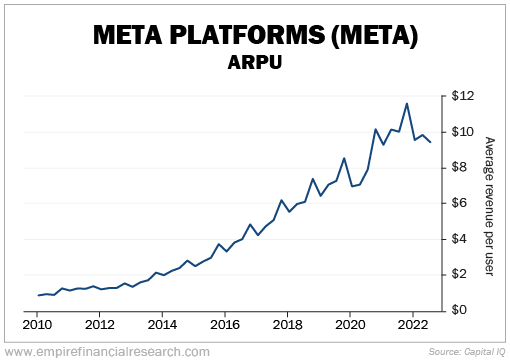 It was a beautiful trend line until two years ago, when ARPU flattened. I think this is primarily a function of two things: tough comps after a surge during the first year of the pandemic, and Apple's (AAPL) privacy changes, called App Tracking Transparency ("ATT"), have hurt Meta's ability to target users – and monetize them.

The good news, however, is that the strong headwinds over the past year from these two factors vis-à-vis YOY comparisons will dissipate greatly going forward.

2) Kudos to my colleague Herb Greenberg, who warned Empire Financial Daily readers about self-driving truck technology company TuSimple (TSP) almost exactly a year ago in this prescient essay, The Hype Surrounding Autonomous Trucks and Flying Taxis, when the stock was at $39.12 per share. Today, it's below $3.50 per share – down 92%.

Herb wrote about the lessons from this yesterday: An Overhyped AV Developer Implodes. Excerpt:

As part of that research, I had already spoken to a half dozen former employees and a few competitors, and I had done quite a bit of industry work... I also unearthed one heckuva lawsuit that had been filed by the company's former head of safety, who claimed he was fired for refusing to "simply 'sign off' on safety standards that were simply not met."

All of which is why most of what I wrote in that October 2021 Empire Financial Daily essay was about TuSimple. As I explained...

As the only public player so far, much of the attention has been on TuSimple, which started in China before miraculously (almost like – presto!) turning itself into a U.S. company. (The U.S. government is currently reviewing whether it poses a security threat.)

TuSimple's claim is that its fully autonomous trucks will be manufactured in conjunction with Navistar "at scale" – ready for an "autonomous freight network" it is rolling out across the country by 2024.

Sounds good on paper, but TuSimple has a history of being overzealous with its financial projections.

I went on to regurgitate what I had pieced together from tech website The Information – based on its excellent reporting from when the company was still private and trying to raise cash – on the various financial forecasts it was making.

This story underscores the kind of research Herb does, using the unparalleled network of contacts he has developed over many decades.

And right now, you can benefit from Herb's best long ideas by subscribing to his new Empire Real Wealth newsletter. For only $49, you'll be able to access his first 10 recommendations, which are up 12% on average – double the S&P 500 – and also receive his best idea every month for the next year.

To find out how to get a risk-free, 60-day money-back trial to Empire Real Wealth, click here.

3) I just got home this morning from a brief 30-hour trip to Las Vegas to celebrate my 56th birthday (I posted baby pictures on Facebook here).

Upon my arrival Monday evening, I met up with my climbing guide Paul and his wife Breezy and we saw the Cirque du Soleil KÀ show, which was excellent, though not quite as good as their O and Mystère shows in Vegas.

We got an early start yesterday and drove to Red Rock Canyon, which has some of the best climbing in the world and is only a 30-minute drive from The Strip. After an hour hike to the base, by 9 a.m. we were climbing on the first of two routes Paul picked for us on Mescalito Peak, which is in the background just above Breezy's backpack in this picture (it looks small, but trust me, it isn't): 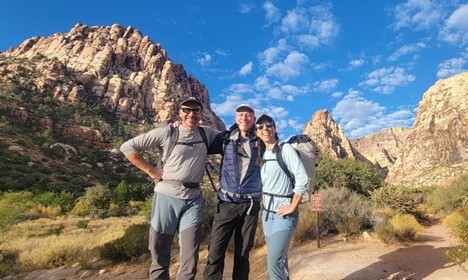 Neither was especially difficult – I can climb 5.9/5.10a – but I haven't climbed in a year, so it was perfect, as was the weather, as you can see in these pictures (I posted more on Facebook here): 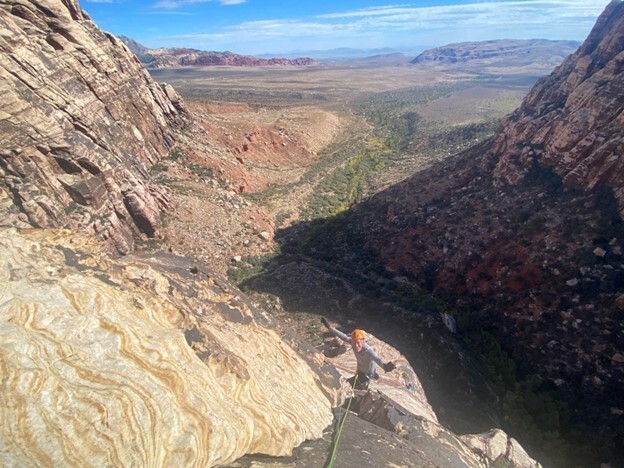 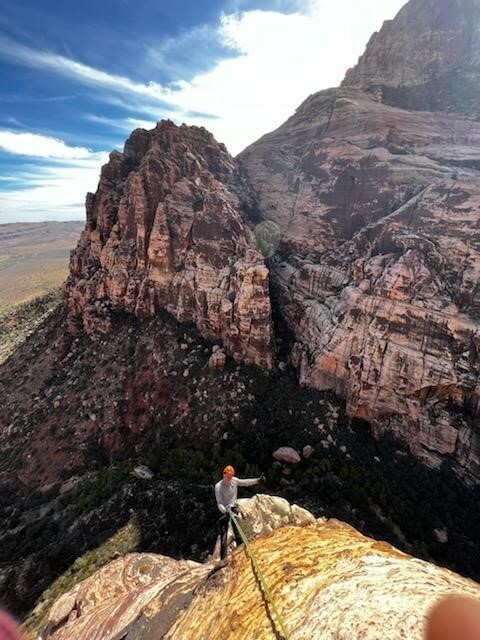 Then we hiked back to their van and drove back to The Strip, where we met up with Susan, had dinner, and went to the Elton John concert. He sold out the 65,000-seat Allegiant football stadium and put on a heck of a show – it's amazing how strong his voice is at age 75! Here are two pictures (I posted two more and two video clips on Facebook here): 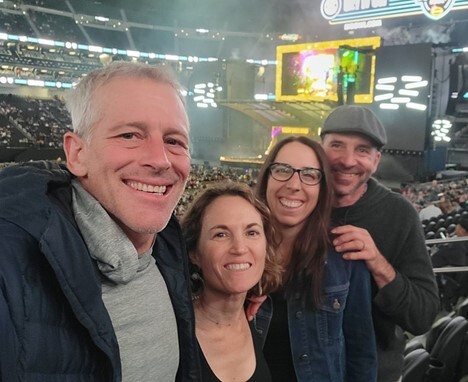