Why I think Apple will underperform

1) In three of my e-mails last week (here, here, and here), I discussed bubbles – whether we're in one and how I've correctly identified so many over time.

To further explore this topic, let's take a look at tech giant Apple (AAPL). I'm a huge admirer of this incredible company, and I enjoyed attending its annual meeting earlier this year with my cousin and two of his kids, which I wrote about in my daily e-mail at the time. Here's a picture of us: 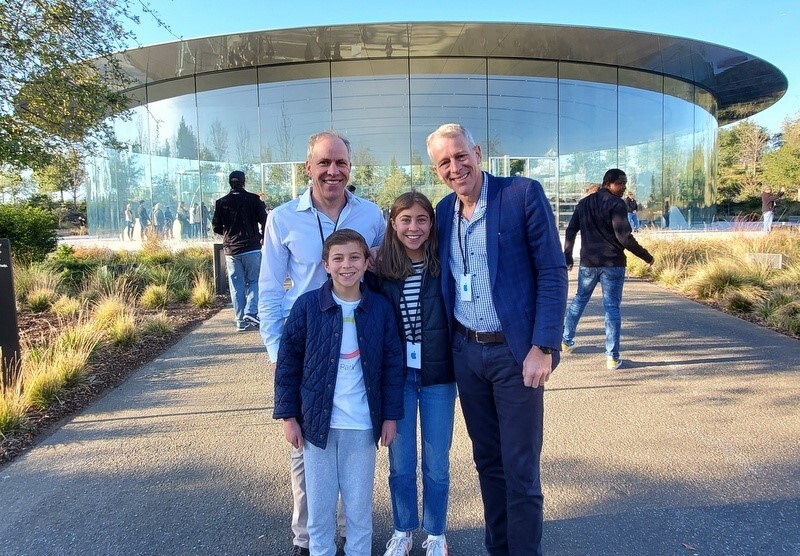 One of my great regrets is not simply holding onto its stock, which I bought in October 2000 at 35.5 cents per share, adjusted for three subsequent stock splits totaling 56:1. (I'll be writing about the importance of letting your winners run in an upcoming e-mail.)

As you can see in the chart below, Apple's stock has outperformed the S&P 500 Index by a wide margin over the past decade: 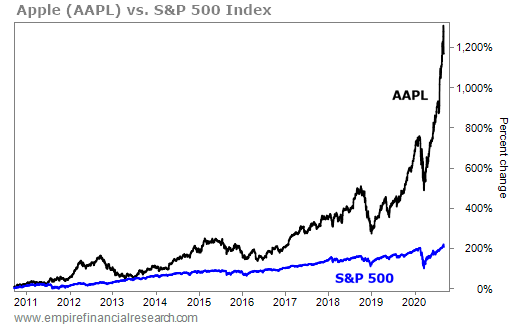 But great companies aren't necessarily great investments if their stocks become too overpriced... Just ask shareholders of another tech giant – Cisco (CSCO). As this next chart shows, more than 20 years later its stock still hasn't reached the level it hit in early 2000 during the Internet bubble: 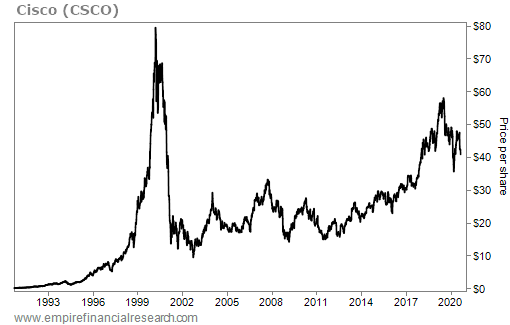 My quick take: Apple's stock today isn't caught up in even a tiny fraction of the bubble that Cisco was in two decades ago. That said, for many reasons outlined below, I think that the stock is unlikely to beat the S&P 500 going forward – and could likely trail the index.

2) Randall Abramson of money-management firm Generation PMCA spoke at my investing conference long ago and I've been reading his investor letters ever since.

In his latest one, entitled "Not the Apple of My Eye," he outlines why he think AAPL shares are "vulnerable to an approximate 25% decline... and that's with some reasonably optimistic assumptions." You can read his entire letter here, and here's an excerpt:

Apple's market valuation looks rather rich. Summarized in Table 1, Apple's multiples are well above its 5- and 10-year averages...

With the stock priced for beyond perfection, a bad quarter, product flaws, production issues, a cyber-incident, or competitive disruption could lead to a large correction. Investors should wait for doubts about Tim Cook's leadership skills or questions about Apple's ability to innovate to washout growth expectations. We've seen it before and we'll no doubt see it again...

The valuations and index weightings of Apple and other richly valued Info Tech and Communications stocks have potential negative implications for the overall market. Thanks to these companies, the median implied growth of the S&P 500 constituents is 6%, a 20-year high – higher than in the dot-com bubble.

But Abramson doesn't think Apple's stock is a good short:

Despite Apple's lofty valuation, it would not be a candidate for short-sale in our view. We believe short sale candidates should be companies with near-term downside catalysts, poor earnings quality, or other problems. And valuations could extend even further, like they did during the tech bubble.

3) A member of my favorite stock idea website, ValueInvestorsClub, disagrees and pitched Apple as a short last week. Only members can read recent ideas, so I can't include a link or the full write-up here, but here's a summary:

We think Apple is one of those situations where you may make a lot on the short side and will probably not lose too much. It's not the most attractive short pitch, but you probably won't get Tesla'd. More importantly, there are many trends that are working for short sellers which we think are "cheap put options" at the current valuation.

First, Apple trades at 34x forward earnings. This is a valuation AAPL has not seen in over a decade, when the smartphone market was rapidly growing and AAPL was quickly gaining share. Today, the smartphone market is ex-growth and younger companies like Xiaomi (founded in 2010) are growing 20% per year and gaining market share in key geographies. In 2015, AAPL generated $82 billion in EBIT and the company is expected to break this high-water mark in FY21 or FY22. Despite all the analysis on product cycles and service revenue growth, AAPL has barely shown any real growth.

Second, Apple's incremental returns on invested capital are terrible. AAPL has basically spent all its cash and cash flow buying back shares. That is fine, but the impact it will have on its EPS growing in the future is miniscule at the current valuation. If they bought back $100 billion in stock tomorrow, it would only reduce the share count by 4%-5%. If the biggest driver of EPS the last 5 years has been tax cuts and buybacks, those tailwinds won't be powering EPS much in the future...

Sixth, we have been humbled looking at the TSLA re-rating. Nonetheless, it's hard for us to accept the market valuations and bubble-ish trading sentiment. We want to express a negative view on this, but are concerned that it's tough to time the top of a potential bubble. AAPL allows us to express this view, where we see 30%-40% downside in the event AAPL reverts to historical P/E multiples, without huge risk the trade works against us.

This write-up generated a great deal of discussion on the message board. Here are two posts with cautions about shorting Apple:

Think a discussion of Apple valuation has to acknowledge that the growth in its services business warrants a re-rating. Services are growing 15%-20% annually and are 38% of gross profits (in 3Q, 32% YTD and as low as 20% in 2017 – first year I saw disclosed in my quick search). Today, services gross margins are 2x product gross margins, and incremental gross profits are $0.85 for every $1 of revenue growth. It is true that the bulk of opex growth is likely to support services so this growth hasn't fallen to the bottom line (yet), but that seems like a prudent capital allocation decision given how the business is changing. As this business scales (and its core business remains a replacement cycle product with pricing power), it does not seem unreasonable that services profit contribution is substantial in five years. And at that point, how penetrated is this opportunity if you expect our lives to becoming increasing centered around the devices in our pockets?

Agree that of all the big tech companies, Apple is the weakest link. No growth, no innovation, no new revenue streams. They are still living on Jobs' legacy. Yet, in this ultra-low interest rate environment what is the appropriate multiple for the market? Are 30s the new 20s or new teens? If history is any guide, market multiple could even get higher. Not that long ago 10-year Treasury was yielding 3%. Did the stock market properly adjust to 0.7% yield? I don't know. 34x earnings may be the new normal for some time. Probably, the catalyst for AAPL selloff will be disappointing revenue/earnings or higher interest rates. This may take years.

In summary, I agree with Abramson that Apple isn't a good short – but agree with both Abramson and the ValueInvestorsClub write-up that the stock is likely to underperform and should therefore be avoided.