Why I like Alphabet more than Apple; Comparing the two companies' first quarters; Why the market punished Alphabet and rewarded Apple; What to expect going forward

Last July, I published an article entitled Why I like Alphabet more than Apple — and Buffett doesn’t. In it, I wrote:

My money – unlike my investing hero, Warren Buffett – is on Alphabet significantly outperforming Apple in the long run because it has a better business model, is growing much faster, and is likely to continue doing so.

To be clear, both are insanely great companies and I think Apple’s stock will also do well going forward – just not as well as Alphabet’s.

So far, I’ve been wrong. In the nine months since then, Apple (AAPL) shares are up about 10% (including today’s gains), while Alphabet (GOOGL) shares have fallen 8%.

Is it time to throw in the towel and change my mind? Not a chance… In fact, in light of the companies’ relative performances over the last three quarters, I’m more convinced than ever that Alphabet’s stock will outperform Apple’s going forward.

Let’s compare the quarter Apple reported yesterday versus the one Alphabet reported on Monday. 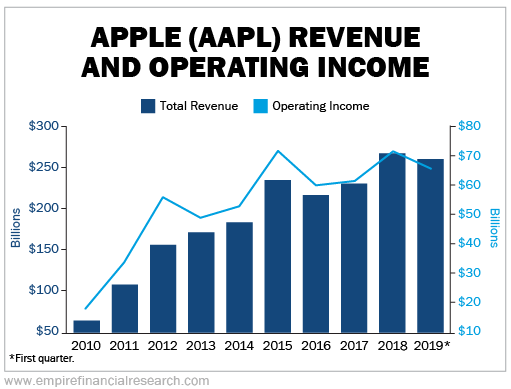 In marked contrast, Alphabet is growing like a weed. Its revenue, operating income, and operating cash flow (excluding a one-time fine) rose 16.7% (19% in constant currencies), 8.8%, and 3.1%, respectively. (Net income fell by 11.3% due to less “other income” and a higher tax rate.) Here’s the same chart for Alphabet… 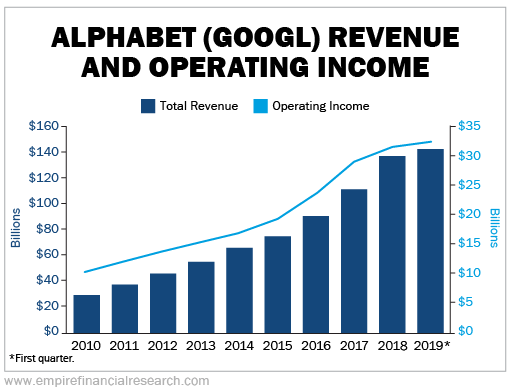 What a stunning contrast between these two charts!

In part, it’s price versus expectations. Apple’s stock is cheaper than Alphabet’s based on enterprise value to trailing sales, EBITDA, or net income. So while Apple’s quarter was dismal, this was already built into the stock price. Investors had feared even worse numbers, so they’re breathing a sigh of relief today.

With Alphabet’s more expensive valuation, the stock had less room for error. While it reported an extraordinary quarter by any objective metric, it didn’t meet investors’ sky-high expectations.

Another big reason for the different responses to the two earnings reports is that Apple is returning huge sums of capital to shareholders. The company has been paying a regular dividend every quarter since late 2012, totaling $14.2 billion over the past year.

And it’s been spending even more buying back stock: $75.1 billion over the past year, including $23.8 billion last quarter, its biggest ever buyback. This reduced the share count by 7.2% year over year.

Meanwhile, Alphabet doesn’t pay a dividend and only repurchased $9.9 billion in stock over the past year, so the diluted share count only fell by 0.6%.

In my opinion, the market is making a big mistake. In the short run, Apple’s lower valuation, combined with its big returns of capital, may carry the day.

Over time, the far higher growth that I expect from Alphabet will swamp the relatively small valuation differences. (And keep in mind, I’m a value guy!)

As for returns of capital, investors are rewarding Apple and punishing Alphabet for this… But I’d argue the fact that Apple is returning so much cash to shareholders is a sign of weakness. It’s a form of financial engineering that reflects Apple’s limited future growth prospects.

Apple is simply too big – with $258 billion of revenue – to grow much more (if at all). So big returns of capital make sense, but it’s still a weakness.

Apple is a world-class company, but it’s hard to see where its future growth will come from. I don’t expect it to outperform the market going forward.

In contrast, Alphabet, which has barely half the revenue of Apple, has plenty of room for growth. As I wrote in my article last July:

Of the two-thirds of all adults on Earth who don’t currently have a smartphone, most will get one in the coming years. At first glance, this would seem to favor Apple over Alphabet – but I disagree. Those who don’t have smartphones currently are generally low-income, and Apple has very few inexpensive products. My view is that pretty much everyone who can afford an iPhone already has one, so where will growth come from (especially since I haven’t seen much innovation from Apple in the post-Steve Jobs era)?

Meanwhile, Alphabet, led by its seven products with over 1 billion users per month, stands to be the primary beneficiary of a few billion more people getting smartphones.

Someday, Alphabet will become too big to grow much. At that point, it will start returning cash to shareholders. That will be the smart thing to do… eventually. But it will be a sign of weakness, which will be reflected in a lower valuation for the stock.

Alphabet is still at least five years away from this point. Its revenue can double over this period – which would be 15% compounded growth – and I expect the stock to follow the same trajectory.