Why I didn't sell SandRidge Energy after it tripled

In my last three e-mails, I discussed how I found, analyzed, invested in, and sized my position in SandRidge Energy (SD). As I noted earlier, it was one of my most successful investments ever. I closed out the position over the past week for a 544% gain in less than 18 months – almost 10 times the 56% return of the S&P 500 Index.

Today I'd like to pick up where I left off yesterday and share some thoughts on why I held the stock without making a single trade for nearly a year and a half and why I decided to exit.

Some quick background that I covered in prior e-mails. In April 2020, the world had largely shut down due to the pandemic, crushing the demand for energy. As a result, oil and natural gas prices had plunged and were at or near multidecade lows (see charts in Monday's e-mail).

I could see that, historically, when oil and natural gas prices were so low, they'd always rebounded – often quickly. I was also optimistic that the world would get a handle on the pandemic, and economic activity would soon start to pick up. Thus, even though I'd rarely invested in any type of commodity, I was looking to make a bet that would pay off if energy prices rose.

And then I got lucky: I read Harris Kupperman's April 27 write-up on Value Investors Club, and it was such a great investment that I bought nearly $50,000 of the stock that same day.

Here's what the stock has done since then: 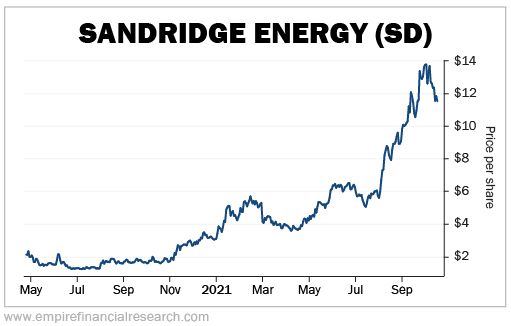 Notice that the stock did absolutely nothing for more than six months. In fact, it was less than my $1.95 purchase price much of the time.

So why didn't I get discouraged or fatigued and sell? Very simply, I wasn't paying any attention to it. My focus is on my business, most importantly finding great stocks that I can recommend to Empire Financial Research subscribers. I pay almost no attention to my personal portfolio, and even less time on a small position in it.

But had I been paying attention, the last thing I would have done is sell because I don't let market prices tell me what to think; rather, I draw conclusions based on the fundamentals, namely data and my analysis.

And by the beginning of November, my thesis was playing out perfectly.

Keep in mind that I wasn't really investing in the company but rather making a leveraged bet on a rebound in natural gas and oil prices.

Here is what the price of natural gas has done since April 2020: 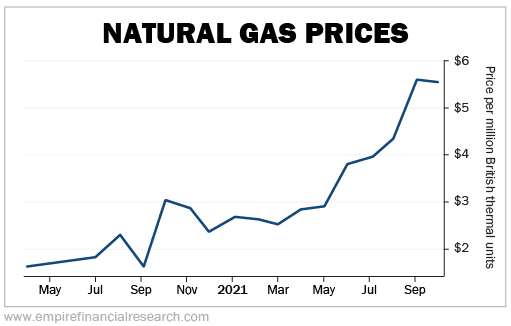 And here's what oil has done over the same period: 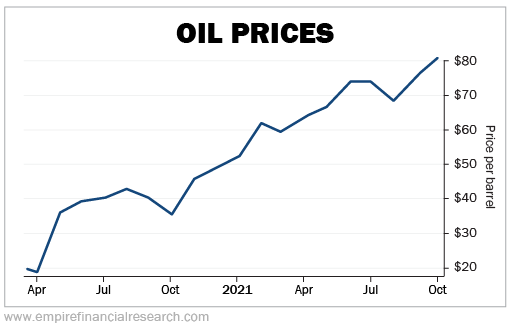 As you can see, by the beginning of November 2020, the prices of both natural gas and oil had doubled thanks to decent news about the pandemic plus governments around the world injecting trillions of dollars into their economies, which combined to trigger the start of a global economic boom.

I wish I'd been paying more attention. Had I been, I'd like to think that I would have doubled down on this position.

But not paying attention to SandRidge had a benefit: Namely, once the stock started to take off, I didn't sell. When it doubled in six weeks from early November to mid-December 2020, I didn't sell. And when it rose another 50% to nearly $6 two months later, I still didn't sell.

Of course, with the benefit of 20/20 hindsight, it seems obvious that this was the right – and therefore easy – decision.

But here's the truth: Had I still been running my hedge fund, closely following the stock every day and carefully analyzing SandRidge's earnings reports and other news about the energy sector, I think it's likely that at some point between $4 and $6, I would have sold half the position or maybe even exited entirely.

I can't tell you how many times I did exactly this in my nearly 18-year hedge fund career, truncating my big winners far too soon. (I shared the three most painful examples, Apple (AAPL), Amazon (AMZN), and Netflix (NFLX), in yesterday's e-mail.)

This type of behavior by active investors is absolutely deadly. Numerous studies have shown that a handful of huge, often unexpected winners drive a large percentage of the total gains in any long-term stock portfolio.

But if in "practicing prudent portfolio management" or "not being greedy," you're trimming or exiting these monster winners far too early, it will crush your long-term performance. That's one of the reasons why the vast majority of investors trail passive index funds like the S&P 500, which, if you think about it, let their winners run forever.

So now you're probably wondering, "In light of all this talk about not selling your big winners, why did you just sell SandRidge, Whitney?"