Why Cruise Line Stocks Are at Risk

My wife and I love to travel...

One of our favorite ways to get from here to there is on cruise ships – not the big mega-monsters, but smaller so-called "luxury" ships, which sometimes offer expeditions.

While cruising is the laughingstock of many people on Wall Street, who think they're all like the Love Boat – and "wouldn't be caught dead on any of them" – my wife and I found them to be a great way to explore parts of the world that would take much longer than our vacation time typically allows.

From Antarctica and Australia to China and Russia, much of it by ship, we've been to every continent and more than 40 countries...

We have also sailed on some of the world's great waterways – including the surprisingly fascinating Suez Canal, the ever-challenging Drake Passage, and the equally volatile Tasman Sea.

We put considerable thought into these trips and tend to book out a few years.

So, after the COVID-19 pandemic hit, my wife and I began reassessing our calendar­ – starting with a trip we had planned for the tail end of 2020...

Like everybody else, as the pandemic wore on, we eventually canceled... a few weeks before that same cruise line canceled all remaining 2020 cruises.

We weren't alone. I monitor the cruise line forums on the Cruise Critic website. It's a valuable research tool for gauging customer sentiment as it relates to cruising...

It was the "live" reports on Cruise Critic from passengers on ships in early 2020 that told the story of what was about to happen to the stocks – long before analysts were sounding the alarm... or even shorts were starting to pile in. In early February 2020 – a point when the stocks were still holding up – I tweeted: 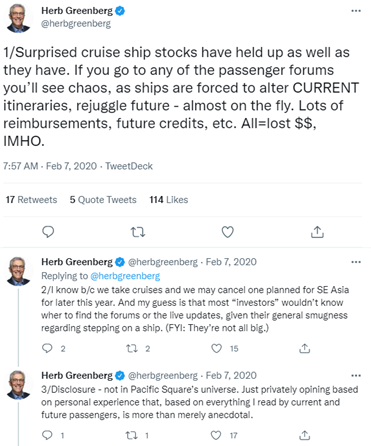 Within a few weeks, cruise line stocks collapsed... and the rest is history.

But the surprising part of the story...

Despite everybody writing cruise ships off as "floating petri dishes," the message board chatter showed that by fall 2020 – even as cruises were being canceled – people were eager to get back on board. We're talking before there were vaccinations... and, given their apparent age, this was based on comments by people who were likely at high risk of getting the sickest from COVID-19.

I started comparing notes with a few others...

And in October and November 2020, I bought shares of Norwegian Cruise Line (NCLH) and Carnival (CCL).

I chose Norwegian and Carnival because these companies own the two brands that my wife and I have sailed most in recent years: Regent and Seabourn, respectively.

Plus, the thesis didn't seem unreasonable: The pandemic would start burning out by summer 2021, cruises would restart slowly, and cash from whatever debt and/or stock the companies had issued would carry them through the crisis.

But by early 2021, Norwegian and Carnival started raising even more cash, a good part of it by issuing more stock while continuing to pile new debt on top of existing debt.

That meant I would own less of an increasingly levered company. To me, this suggested that the thesis had changed.

At the same time, there was an increase in the number of passenger complaints on the forums about the amount of time it was taking to get their deposits or fully paid fares refunded from some of the cruise lines.

As a result, even as the stocks moved higher, I bailed.

As usual, the forums gave a clue into how business was doing... but more important, how it might do going forward.

At first there was enthusiasm about getting back on a ship, any ship, even if it went nowhere.

In their posts, people sounded almost giddy. They simply wanted to go somewhere, even if it meant circling the Greek Isles, stopping at multiple "tourist" ports in Mexico, or bouncing back and forth between a few islands in the Caribbean, where the highlight of one island was swimming with pigs.

As of this month, as the chart below from Cruise Industry News shows, almost all ships (including a few that were newly built) were back sailing, with a twist: Most were at reduced capacity. After all, they need rooms to quarantine sick passengers and crew. 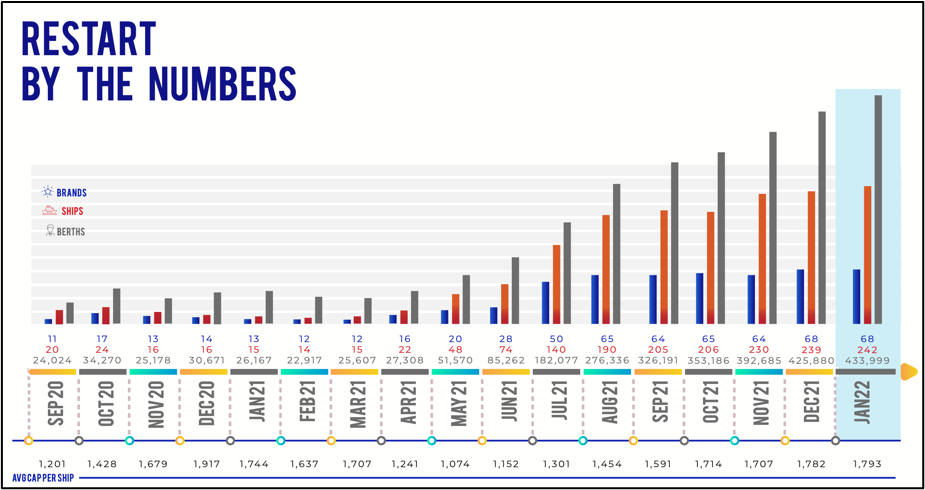 But that enthusiasm started to wane, and grumbling started to pick up, as ships were increasingly being banned from docking in port after port over pandemic fears. There also appeared to be an increase in quibbling over such things as masking requirements and the hoops passengers had to jump through at embarkation.

As omicron continued to rage, chatter of cancelations by passengers started to rise. And now, the cruise lines themselves are once again starting to cancel trips.

Norwegian and Carnival are canceling cruises out to April... and that's assuming there is nothing new on the COVID-19 front. This is also showing up in short-term sentiment.

Worse, put yourself in the shoes of passengers slated to sail on Regent's recent long-planned 120-day so-called 'world cruise'...

A day before the voyage was expected to begin, they received an e-mail alerting them it had been canceled... and would be converted to a Caribbean cruise. (They could stay on for the length of the world cruise, if they chose, for a discount. Many had already landed in San Francisco, where the cruise was slated to start.)

That brings up another part of the wrecked bull thesis... that seemingly more than half the ports around the world are still closed to cruise ships from other countries.

All of this is happening as free cash flow by the major cruise lines is plummeting. This five-year chart shows just how upside-down things have become for Royal Caribbean (RCL), Norwegian, and Carnival... 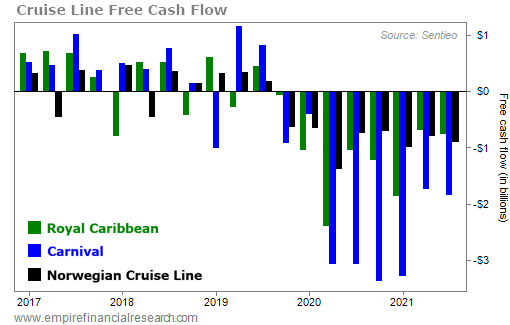 Meanwhile, debt for all three is through the roof... 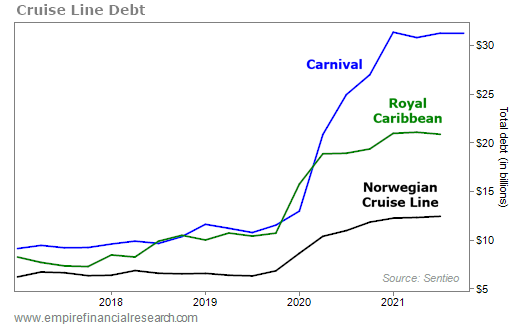 So it was only fitting that last week, Hindenburg Research – known for its activist shorting – said that it was short Royal Caribbean, tweeting... 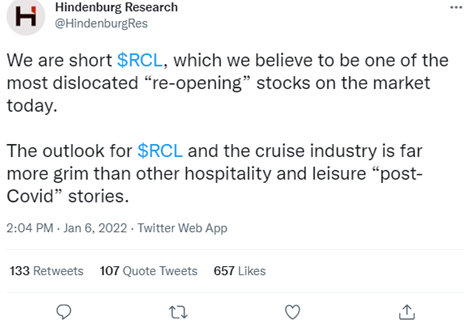 Hindenburg didn't issue a full report. But in a series of additional tweets, the firm ticked off its key concerns – first stating that "RCL's enterprise value recently eclipsed its pre-pandemic highs."

Hindenburg went on to note that even after roughly doubling debt to $10 billion, at $17 billion Royal Caribbean's debt "will be extremely difficult to service, almost necessitating extensive dilution of existing shareholders."

If Hindenburg is correct, that means issuing even more stock. The firm went on to explain that it believes Royal Caribbean's "business fundamentals are permanently impaired," and that the pre-pandemic "bear case is stronger than ever, yet the company's stock price already reflects a full-scale return to normal."

It summed up its case, by saying...

All told, through a combination of "meme" and "reopening" frenzy, RCL has remained one of the clearest recent market dislocations despite its obvious business and balance sheet impairments.

That's not to say that cruise lines are completely out of ammunition...

To raise cash, they could no doubt start selling off some of the brands they rolled up over the years.

Among them: Carnival's holdings include Cunard, Princess, Costa, and Seabourn. Norwegian owns Regent and Oceana. Royal Caribbean owns Celebrity... and it also owns Silversea, which it bought recently bought from an Italian family after selling its quasi-luxury line Azamara to private equity last year.

Private equity has a history of wheeling and dealing with cruise lines, especially the smaller luxury brands. But even if they or others are buyers... would that generate enough cash to whittle down the debt in a timely fashion?

There's no question that people still want to cruise. My wife and I are among them, and we have rolled trips forward, as have others in the forums. I have no doubt ships will be back at pre-pandemic capacities once things calm down... whenever that will be.

And that's the point... when will that be? What's unclear is whether that will be soon enough for an industry that is rapidly taking on water faster than can be pumped out.

As always, feel free to reach out via e-mail by clicking here. And if you're on Twitter, feel free to follow me there at @herbgreenberg. My DMs are open. I look forward to hearing from you.