When to buy and hold a stock versus when to sell

In my last four e-mails, I discussed how I found, analyzed, invested in, sized my position in, and, for nearly 18 months, didn't sell my position in SandRidge Energy (SD). As I noted earlier, it was one of my most successful investments ever: I just closed out the position over the past week for a 544% gain in less than 18 months – which is almost 10 times the 56% return of the S&P 500 Index.

I had planned to wrap up my discussion today of this beautiful case study by sharing why I decided to exit this position. But that will have to wait until tomorrow because I first want to discuss in general terms the critically important topic of when to hang on to a stock versus when to sell.

As I concluded in yesterday's e-mail, getting this decision wrong on a handful of occasions were some of my biggest mistakes:

... in my nearly 18-year hedge fund career, [I too often truncated] my big winners far too soon. (I shared the three most painful examples, Apple (AAPL), Amazon (AMZN), and Netflix (NFLX), in yesterday's e-mail.)

This type of behavior by active investors is absolutely deadly. Numerous studies have shown that a handful of huge, often unexpected winners drive a large percentage of the total gains in any long-term stock portfolio.

But if in "practicing prudent portfolio management" or "not being greedy," you're trimming or exiting these monster winners far too early, it will crush your long-term performance. That's one of the reasons why the vast majority of investors trail passive index funds like the S&P 500, which, if you think about it, let their winners run forever.

But here's the thing: This approach only works with a very small number of stocks. If you want to practice "buy and hold" for years (if not decades) of investing – what Charlie Munger calls "sit on your ass investing" – then you need to be able to identify companies that have long runways and huge moats that can grow and grow and grow.

That seems like a long list, but in reality, stocks like these are only a tiny fraction – less than 1% – of the more than 4,000 publicly traded companies in the U.S. – and more than 10 times that number globally.

So if you find one of these rare gems, my advice (which I wish I'd followed in my hedge fund career!) is to hold on, almost irrespective of price. Don't try to be too smart and cleverly trade their stocks – you are almost certain to lose at this game (especially if you're paying capital gains taxes every time you realize a profit).

They'll surely have flat and even down years – sometimes even multiple years! But if you ignore these periods – and you're right about the business – you will be richly rewarded over time if you just have the patience to sit tight.

Some investors – Berkshire Hathaway's Warren Buffett and my friends Tom Russo of Gardner Russo & Gardner and Yen Liow of hedge fund Aravt Global come to mind – seek to build portfolios exclusively of these long-term compounders. Therefore, they have a very low portfolio turnover.

I do this to some extent in my personal account, which today is 32% in cash and 68% in stocks. The latter is half in an S&P 500 index fund and the balance in a dozen stocks. The three largest are long-term compounders. But the others are a hodge-podge of stocks that have the characteristics of mispriced options (like SandRidge) or lower quality businesses where the stocks are way too cheap, in my opinion. (Unfortunately, as a publisher, not an investment advisor, I'm not permitted to name the stocks I currently own.)

The latter stocks are the ones I know I'm going to have to sell at some point.

So, when should you sell? In my September 14 e-mail, I shared an excerpt from my forthcoming book, The Rise and Fall of Kase Capital, on this topic.

But the short answer is that there are four reasons to sell:

1) You realize you've made a mistake, either at the time of your investment or later because the story changes negatively and unexpectedly.

2) The position grows so large that it hits your risk limits (or just makes you nervous enough that you're losing sleep over it).

3) You're capital constrained and are certain that if you sell, you can reallocate the money (after taking taxes into consideration) into something much better.

4) Your thesis has played out, and the stock fully reflects this (i.e., you've been paid for it).

You need to be very careful with each of these because it's easy to fall into emotional traps and sell too early...

Regarding 1) Over the past nine years, how many times have there been negative reports or news about Netflix – yet the stock is up 80 times over this period!

Regarding 2) If you've identified a great long-term compounder like one of the stocks I mentioned above, I urge you to get comfortable with letting it grow to be a 10% or even 20% or larger position.

My friend Chris Stavrou, who ran hedge fund Stavrou Partners for many decades before retiring a few years ago, discovered Warren Buffett in the 1970s and was smart enough to realize that he was a once-in-a-generation investor.

He started buying it at $211 and kept buying, even as the stock went up and up over the years.

But here's the key: He never sold, even when Berkshire grew to be more than 50% of his hedge fund!

Chris was kind enough to say this about me (here's the 40-second video clip):

The greatest teacher of investing was Benjamin Graham. He was followed by Warren Buffett and Charlie Munger. Believe me, the third person is Whitney Tilson. He's a natural teacher.

Here's a picture of us: 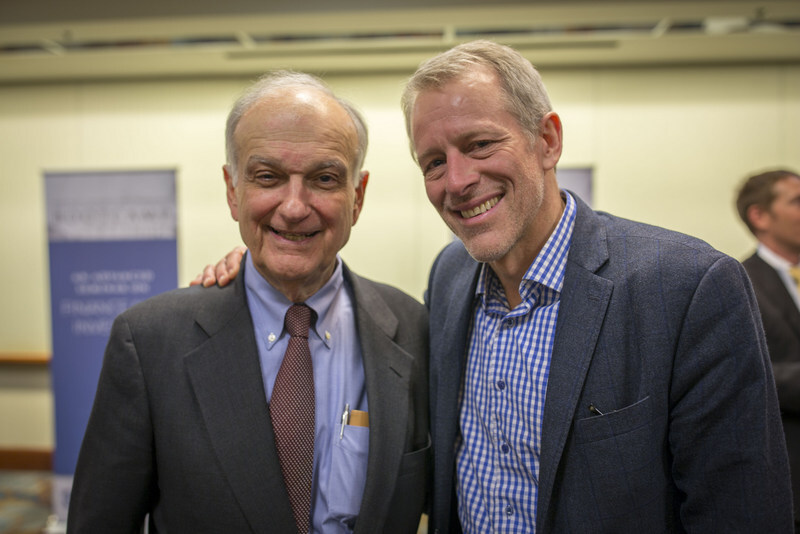 Regarding 3) It's easy to get bored with a stock you've owned for a while, especially if it's been flat for a while. Still, you are generally well-advised (according to many studies) to resist the temptation to trade it for something new, no matter how shiny and exciting it appears.

And regarding 4) If you're smart/lucky enough to own a great long-term compounder, just because it's doubled or even gone up ten-fold does not necessarily mean your thesis has played out.

In conclusion, your decision about whether and when to sell a stock depends on your investment thesis and the type of stock and company you're dealing with. If your thesis is: "This is an insanely great business with a tremendous growth runway," then the correct answer about when to sell it might well be never!

But for most stocks, you should buy them with some sort of idea of what might lead you to sell them.

As my colleague Enrique Abeyta often says, "Plan the trade, then trade the plan." When he says this, it's usually in the context of his short-term trades in his weekly Empire Elite Trader, but the principle applies more broadly as well.

In tomorrow's e-mail, I'll discuss my thesis when I invested in SandRidge and why I decided that it had played out sufficiently for me to exit.