We passed 100,000 readers!; More on SPACs; General Motors seeks more Equity from Nikola; GE Says It Received 'Wells Notice'; What Happened When a CEO Came Out as Transgender

The event kicks off tomorrow night at 8 p.m. Eastern time, and it’s completely free to attend. Just make sure you reserve a spot – you can do so right here.

Here’s an excellent overview of the sector in the Financial Times: Can SPACs shake off their bad reputation? Excerpt:

New SPACs could come from an unlikely source: venture capital firms looking to find another way to list their own portfolio companies or other tech start-up ready for public markets. One well-known firm, Ribbit Capital, is targeting $600m for fintech businesses, people briefed on the plans have said.

“Silicon Valley has started to realize [the] SPAC is not a gimmick, it’s a financial tool,” said [Jeff] Mortara.

In the midst of a bull market that even a global pandemic cannot stop, hope springs eternal as Wall Street naturally averts its eyes to numerous wrecks on the side of the road and gazes to the handful of recent SPAC successes that have centered on visionary businesses.

“It’s the imagination, that’s what captures people,” says Mr. Noel, the lawyer. “There are all these Spacs that have come out of the gate and performed in the marketplace really well, in part because they caught the imagination of people.”

“It’s not about what it is. It’s what people believe it could be,” he said.

Lastly, here’s a New York Times article on the sector, The Urge to Reverse Merge. Excerpt:

“SPACs have become a new way of doing an M&A deal,” said Jeff Mortara, the head of equity capital markets origination at UBS. A merger with a SPAC allows the target company’s investors to retain a stake while gaining liquidity, and deal negotiations can be done directly, secretly and quickly. SPACs typically have two years from their IPO date to complete a merger.

The flood of money to SPACs means better terms for targets

“Everything is negotiable,” the venture capitalist Bill Gurley wrote in a detailed case for SPACs on his blog this weekend. As competition between SPACs intensifies, “sponsors are continuing to negotiate deals that look better for the companies they buy,” he said in the essay, which quickly became the talk of Wall Street and Silicon Valley.

According to a report from the Detroit News, it is likely that General Motors will ask for a higher stake in Nikola Motors during a renegotiation period that is currently underway. The original $2 billion deal was inked when Nikola’s stock was riding high at $42.93 a share. It is now valued at $23.92 at the time of writing. This disparity in stock price takes a lot of value out of the deal for GM, who already are on the hook to provide fuel cell and battery technology to the EV manufacturer.

General Motors taking a larger chunk of Nikola Motors isn’t the only recent development in the story. According to a report from CNBC, talks are ongoing as to whether or not the Nikola Badger will be produced by GM at all. Despite being a part of the initial contract, the Badger has been removed from the company’s updated business plan. In an interview with CNBC, Nikola CEO Mark Russell said that talks are still ongoing surrounding the pickup.

Federal securities regulators have warned General Electric of a civil-enforcement action over its accounting for a legacy insurance business, adding a fresh hurdle to efforts to turn around the once-mighty manufacturer.

The industrial giant said in a securities filing Tuesday that it received the so-called Wells notice on Sept. 30 over the company’s accounting for reserves related to an insurance business it has been trying to wind down for years.

A Wells notice is a letter saying the SEC staff is recommending that the commission bring an enforcement action against the recipient and offers an opportunity to argue why the action shouldn’t be taken. It often serves to cap investigations that can drag on for years, as the final step before formal litigation begins.

The SEC and the Justice Department have been investigating GE’s accounting for about two years after the company disclosed large write-downs tied to the insurance business and its power business.

As background, this is what I wrote about GE in my August 6 e-mail:

I wanted to share my thoughts on the book I just finished, Lights Out: Pride, Delusion, and the Fall of General Electric.

It documents the utter collapse of one of the world’s most iconic businesses, resulting in the destruction of more than $500 billion in market cap since 2000, when the company was briefly the most highly valued in the world. This New York Post article captures the sordid story well: How a power-hungry CEO drained the light out of General Electric. Excerpt:

For years, GE’s profits had been a mirage built on whirlwind mergers and accounting sleight of hand. The funds that had been doled out to shareholders as fat dividends – and had covered its managers’ lavish perks and pay – had largely been borrowed on the strength of the company’s golden credit.

The book’s authors paint a damning portrait of Immelt’s 16 years at the helm of GE, where a rubber-stamp board of directors allowed him to hemorrhage money almost unchecked.

Immelt was just 45 when he ascended to the top spot in September 2001, succeeding business legend Jack Welch. A charismatic, natural-born salesman, Immelt’s boundless optimism fueled a strategy of continual expansion, as he went fad-surfing after the buzziest new ventures.

At Immelt’s urging, GE’s many arms “overpaid for businesses they didn’t understand and then [were] crushed by the market,” Gryta and Mann write.

On his watch, GE bumbled into the subprime mortgage business shortly before the 2008 crash, leading to deep losses that pushed its stock into single-digit territory. Immelt spent $14 billion on an aggressive expansion of GE’s oil and gas holdings – just as the fracking boom cratered the price of crude oil. The digital division he set up in Silicon Valley and showered with $5 billion of capital never managed to produce the machine-learning platform he touted.

Meanwhile, GE’s corporate structure placed Immelt at the top of its board of directors, essentially making him his own boss.

“The board didn’t entirely understand how GE worked, and… Immelt was just fine with that,” the authors write. The well-compensated board members were chosen for their willingness to cheer Immelt on – and he readily ejected directors who objected to his plans.

At the same time, GE’s established divisions were expected to meet earnings goals far removed from reality. “Under Immelt, the company believed that the will to hit a target could supersede the math,” Gryta and Mann report.

It was a recipe for a disaster. Up-and-coming middle managers knew that a missed goal could stymie their climb up GE’s ladder; division heads “didn’t necessarily know how his underlings got to the finish line and it didn’t really matter,” the authors write.

I’ve periodically been tempted by GE’s beaten-up stock, but fortunately a couple of friends who used to work there have always – correctly! – warned me to stay away (and continue to feel that way). It’s an easy decision once I look at the company’s dreadful financials, with minimal free cash flow and $62 billion of net debt.

5) Here’s an interesting article from the Wall Street Journal last month: What Happened When a CEO Came Out as Transgender. Excerpt:

One May morning in 2017, just weeks after her 56th birthday, Bradley & Parker Chief Executive Wynne Nowland hit “send” on an email to the insurance broker’s workforce. It was no routine memo.

“I am writing to tell you about a matter that is essentially personal but will result in some changes at work,” she began. After a lifetime living as a man named Wayne but hiding her true self, she wrote, “I will be transitioning my gender.”

She emphasized that she intended to keep leading the firm she had helped build over 30 years, then added: “In fact, I may be less distracted when I no longer have two personas to juggle!” Two hours later, she was met with hugs – and some wide eyes – from some of Bradley & Parker’s 70 employees as she arrived at its Long Island headquarters in a woman’s pantsuit, pearls and full makeup.

Across America, an estimated 1.4 million U.S. adults are transgender – double the number a decade before, according to a University of California, Los Angeles, analysis of government data – and more are coming out on the job.

Far fewer have done it while leading a company. Not only has Ms. Nowland had to find support for her transformation in the workplace; she’s had to guide her employees, her board and a number of Bradley & Parker’s thousands of corporate clients through it. 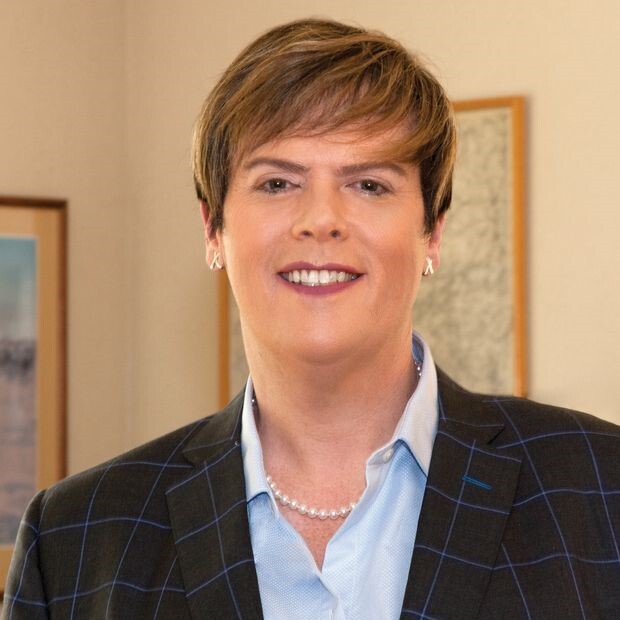 Ms. Nowland in May 2017, on the day she announced her transition to her staff.