Waymo starts to open driverless ride-hailing to the public; The 'TaaS' revolution; How Airbnb Pulled Back From the Brink; Good riddance to Mallinckrodt!; Living the life of a 'dirtbag' climber

Waymo, the Google self-driving-project-turned-Alphabet unit, is beginning to open up its driverless ride-hailing service to the public.

The company said that starting today, members of its Waymo One service will be able to take family and friends along on their fully driverless rides in the Phoenix area. Existing Waymo One members will have the first access to the driverless rides – terminology that means no human behind the wheel. However, the company said that in the next several weeks more people will be welcomed directly into the service through its app, which is available on Google Play and the App Store.

Waymo said that 100% of its rides will be fully driverless – which it has deemed its “rider only” mode.

I took a ride in one of Waymo’s driverless vans in California in February, which I wrote about in my June 29 e-mail.

I think this is the beginning of an extraordinary revolution called Transportation as a Service (“TaaS”) – driven by rapid advances in both autonomous and electric vehicles, as I detail in this video.

I also commented on this at length in an interview I did earlier this year, which is posted here.

2) Here’s an interesting article in the Wall Street Journal about Airbnb, which I’ve used a half-dozen times and always had a good experience with: How Airbnb Pulled Back From the Brink. Excerpt:

In May, after fighting to keep Airbnb from the brink of collapse, Chief Executive Brian Chesky started noticing signs of life in part of his business.

Urban residents were searching for vacation rentals in neighboring towns and cities, so they didn’t have to fly. People wanted to book entire homes, meaning Airbnb could gain from travelers shunning hotels and their shared spaces.

Mr. Chesky quickly switched Airbnb’s strategy. Big cities visited by tourists had been Airbnb’s strength, but it would now focus on local stays. By June, the company had redesigned its website and app so its algorithm would show prospective travelers everything from cabins to lavish beach houses near where they lived.

On July 8, guests booked stays at the rate they were just before the pandemic brought travel and tourism to a halt. In August, more than half of bookings made were for stays within 300 miles of the guest’s location, according to the company.

It was a lucky break, and Airbnb was in position to capitalize on it. The CEO made more changes, including cutting marketing, putting many noncore projects on hold and laying off a quarter of the staff.

“I did not know that I would make 10 years’ worth of decisions in 10 weeks,” Mr. Chesky said in an interview.

The upswing has put the home-sharing giant on a path to go public and report a third-quarter profit this year, according to investors, something that seemed all but impossible months ago.

Mallinckrodt became the third major opioid maker to go bankrupt after being swamped by claims it profited by fueling the U.S. opioid epidemic.

The drug company said Monday it filed for Chapter 11 protection in Delaware after getting creditors and claimants to agree on a restructuring plan that hands ownership to bondholders, wipes out shareholders and sets aside $1.6 billion to resolve all opioid litigation. The filing also will help resolve a U.S. government probe into whether the company defrauded Medicaid by overcharging for Acthar Gel, its top-selling [multiple] sclerosis drug.

The move comes as Mallinckrodt was readying for two trials over accusations it illegally marketed opioids and failed to properly oversee large shipments of the highly addictive pills, which have been tied to an epidemic of abuse that killed thousands of Americans. A judge is likely to halt all litigation while the bankruptcy plan makes its way through the court process.

Whatever [Eastman Kodak’s (KODK)] sins, they pale in comparison to those of companies like drug makers Purdue Pharma and Mallinckrodt, for which there is a special place in hell. They – especially Purdue – largely created and then fueled the opioid epidemic that has been killing approximately 125 Americans every single day for nearly 20 years. (For background on this calamity, I included a number of links in my July 22, 2019 e-mail.)…

It’s taken longer than I thought it would, but the end appears near as the company’s stock crashed earlier this week. MNK shares closed yesterday at $1.54 after the company revealed in its second-quarter earnings report the “possibility of a filing for reorganization in bankruptcy…” Good riddance!

On Monday and Tuesday nights, we camped at the Red Rock Canyon Campground, which is pretty spartan – no flush toilets, showers, or other amenities (some climbers have nicknamed it “Campghanistan”) – but, hey, it’s only $23 per night! I slept in the van (it’s actually quite comfy), while Paul was in a tent.

Here are some pics – I took the first just before sunrise (one of my all-time favorites – look at the lighting!), while the next three are from sunset… 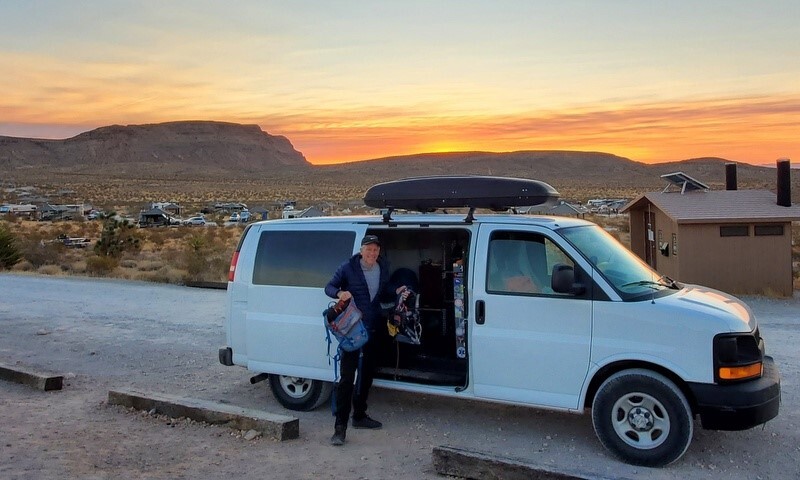 Yes, I do appreciate the irony of a guy with a fancy apartment on Central Park, in the wealthiest Census tract in the U.S., living the life of a “dirtbag” climber. It’s a cultural experience – albeit only for a week or two (and we intend to splurge for one night at a five-star hotel on The Strip – available for under $100)!