1) Following up on my e-mail last week in which my longtime friend and former partner Glenn Tongue analyzed Berkshire Hathaway’s (BRK-B) third-quarter earnings, I was quoted in this Wall Street Journal article about the huge (and welcome) increase in the company’s share repurchases: Warren Buffett’s Berkshire Is Becoming Its Own Elephant Investment. Excerpt:

Warren Buffett has been quietly making a huge bet on a well-known conglomerate with thousands of employees around the world: Berkshire Hathaway…

The biggest purchase that the Omaha, Neb., company has made is to purchase its own stock. Berkshire bought $9 billion of its own shares in the third quarter, bringing total buybacks for the first three quarters of 2020 to $15.7 billion. These buybacks mean that Berkshire Hathaway stock is now one of Berkshire Hathaway’s biggest investments ever…

“Berkshire Hathaway has reached a size and maturity that it’s no longer a growth company; it’s a cash cow,” said Whitney Tilson, founder and chief executive of Empire Financial Research. “To move the needle, he needs to make investment decisions where he’s allocating, I would argue, $10 billion or up.” …

“The Fed became a very rapid direct competitor to Berkshire,” Mr. Tilson said, adding that the Fed’s terms for debt were much better than Mr. Buffett’s were during the 2008 recession.

2) Other than the election, the coronavirus pandemic is dominating headlines – and little wonder, as we’ve gone from 10 million cases to 11 million in only one week and a record number of Americans are now hospitalized, as this chart from The COVID Tracking Project shows: 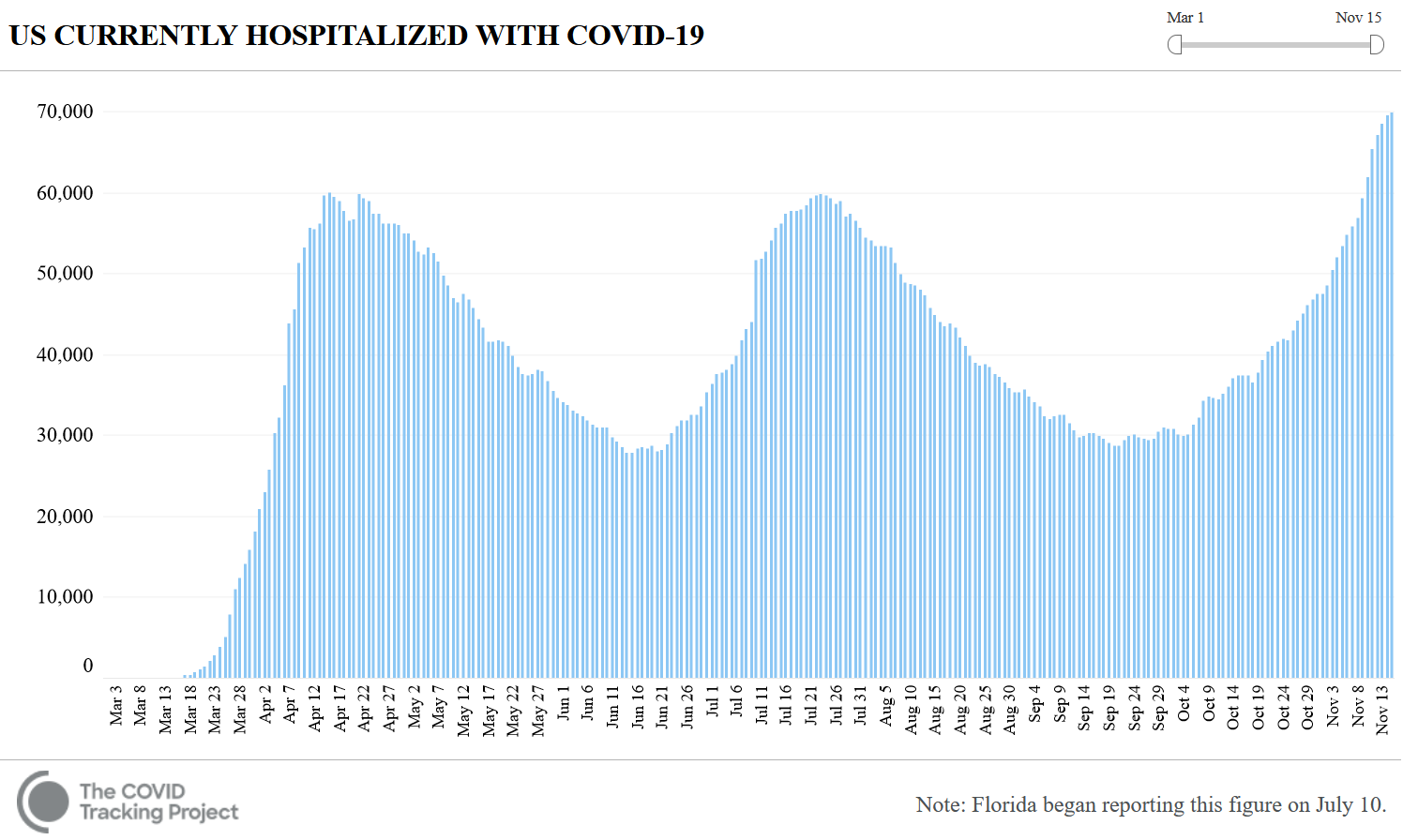 This map (from this article in the Wall Street Journal: COVID Is Resurging, and This Time It’s Everywhere) shows that the third wave of the pandemic is hitting nearly every state… though it’s concentrated in the Midwest and mountain states, which, as I discussed in Thursday’s e-mail, is “consistent with what the herd immunity threshold theory would predict – namely, areas that were hardest hit earlier this year (and thus built up some level of population immunity – though, to be clear, not full herd immunity) are being least affected right now, and vice versa.” 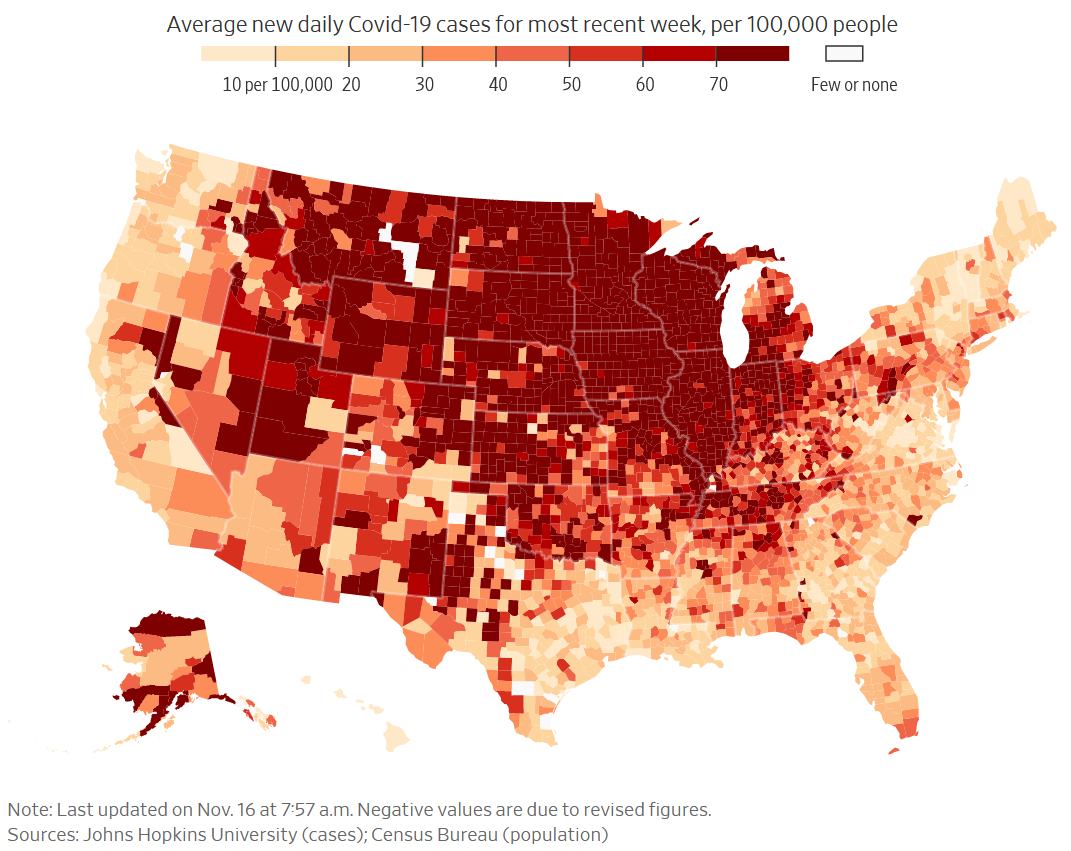 So why isn’t the stock market crashing, as it did earlier this year? I think there are five reasons:

For more on this, below is the last of three e-mails I sent to my coronavirus e-mail list over the weekend (the first two related to New York City Mayor Bill de Blasio’s likely decision to close the city’s schools, which I think is misguided). To be added to the list, simply send a blank e-mail to: [email protected]…

1) One of the biggest debates related to the coronavirus is what matters more in slowing the spread of the virus: a) lockdowns/social distancing/societal behavior, or b) what percent of the population has resistance (a function of how many people have had COVID, and perhaps whether there’s other resistance related to T-cells, etc.).

On one side, the consensus view is that herd immunity isn’t reached until roughly 70% of the population has been exposed – and since nowhere is close to that, this line of thinking is irrelevant (and even dangerous).

On the other side is the view that (at its extreme) lockdowns/social distancing/societal behavior don’t matter at all – and may even make matters worse because: a) it takes longer for the population to reach the level of herd immunity needed to slow the spread of the virus – the so-called herd immunity threshold – which might be reached when only about 25% of the population has resistance… and b) lockdowns cause other suffering and death from the impact of lost jobs, poverty, depression, suicide, reduced screening for cancer, etc.

In my recent e-mails, I’ve been trying to make the point that both of these points of view are partially right and partially wrong. But it’s a very complex argument and I’m not sure I’ve been making it well – but I think this 14-tweet thread does the best job of it that I’ve seen (including a discussion of the importance of seasonality). It’s by Trevor Bedford, an Associate Professor of Vaccine and Infectious Disease at Fred Hutch (here’s his bio). I recommend reading all of it, but here’s a summary:

Here I’m demonstrating this relationship in a contour plot that shows how social connectivity and population immunity influence Rt. In August, the US as a whole was roughly on the dashed line of Rt = 1. 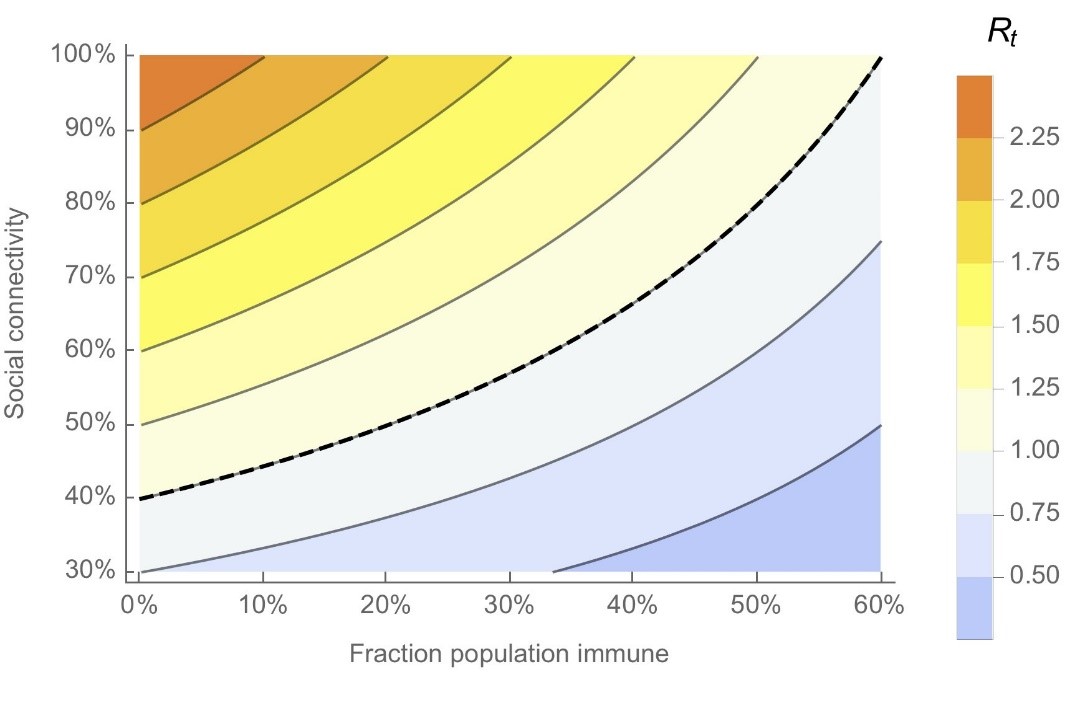 You can see that where we had been at Rt ~1 (shown as the black dot) now corresponds to Rt ~1.15 and results in an exponentially growing epidemic.

We now have a choice in terms of how we get back to Rt<1. The virus “wants” to take us to the right towards more infections, where population immunity brings transmission back down. Alternatively, we can scale back social connectivity to curb transmission. 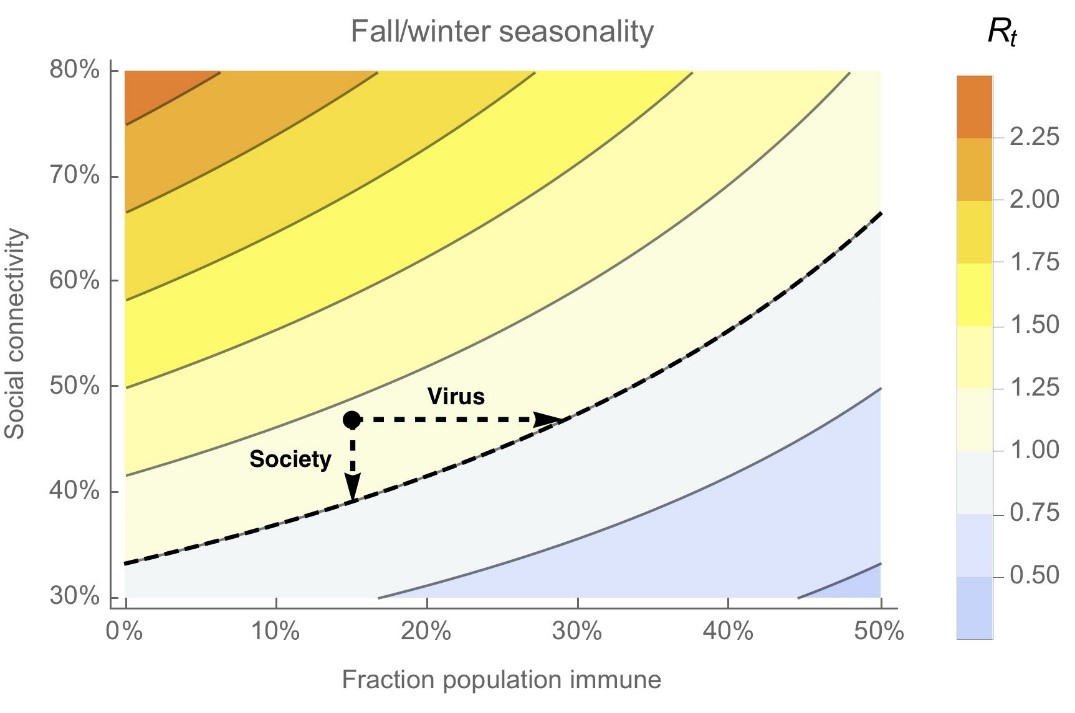 If we don’t take action soon the virus will decide for us. An eventual 30% of the U.S. infected would correspond to ~450k deaths (at an IFR of 0.45%) and many more cases of #longcovid.

For further thoughts from Dr. Bedford, I suggest this related 16-tweet thread he posted in August, in which he looks at Arizona, Florida, and Texas and concludes:

With 20% population immunity, we can behave as though Rt is 1.25 and still get an epidemic that no longer propagates.

Thus, I believe the substantial epidemics in Arizona, Florida and Texas will leave enough immunity to assist in keeping COVID-19 controlled. However, this level of immunity is not compatible with a full return to societal behavior as existed before the pandemic.

In summary, Dr. Bedford is much more elegantly (I love his graphics!) saying exactly what I wrote in Thursday’s e-mail:

The herd immunity threshold is not the same as herd immunity. The latter is when 70% of more of the population has been infected or vaccinated and things can return to normal. Almost nowhere in the world has reached this level. But a critical intermediate point is the herd immunity threshold, which is reached when 20% to 30% of the population has been exposed (based on rough estimates from various scientists). It means that – when combined with basic precautions like mask-wearing, social distancing, protecting the most vulnerable, no big masses of people, especially indoors, etc. (pretty much what Sweden did, minus the masks) – the R0 of the virus drops below 1 and the virus starts to peter out.

3) In Friday’s e-mail, I showed why Maine, New Hampshire, Vermont, Oregon, Washington, Idaho, Utah, and North Carolina are most at risk because they likely have the least population resistance, using their historical hospitalizations per million of population as a metric.

I should have put New Mexico on the list as well, because this is what its chart looks like: 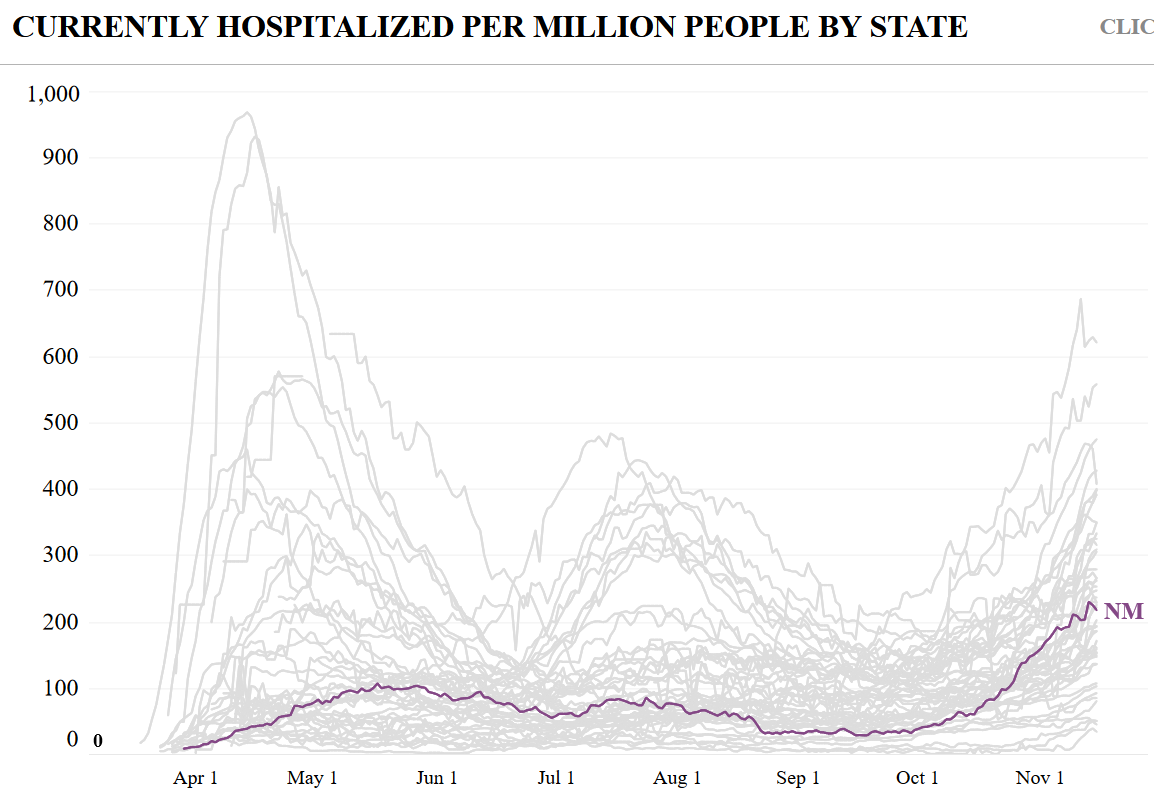 For all of these states, I concluded that “the policy implications… are clear”:

I thought of two of these states when I read this recent headline: Oregon, New Mexico order lockdowns as other states resist. Excerpt:

The governors of Oregon and New Mexico ordered near-lockdowns Friday in the most aggressive response yet to the latest wave of coronavirus infections shattering records across the U.S., even as many of their counterparts in other states show little appetite for reimposing the hard-line restrictions of last spring.

“We are in a life-or-death situation, and if we don’t act right now, we cannot preserve the lives, we can’t keep saving lives, and we will absolutely crush our current health care system and infrastructure,” Democratic Gov. Michelle Lujan Grisham of New Mexico said in imposing a two-week stay-at-home order.

Oregon Gov. Kate Brown ordered a two-week “freeze” starting Wednesday, under which all businesses will be required to close their offices to the public and mandate work-from-home “to the greatest extent possible.”

While most Oregon stores will remain open, gyms, museums, pools, movie theaters and zoos will be forced to close, and restaurants and bars will be limited to takeout. Social gatherings will be restricted to six people.

To see whether Oregon and New Mexico are overreacting, I took a look at their metrics: daily tests, daily cases, currently hospitalized, and daily deaths (data here), as well as percent positive tests (data here). Here is the data for both states: 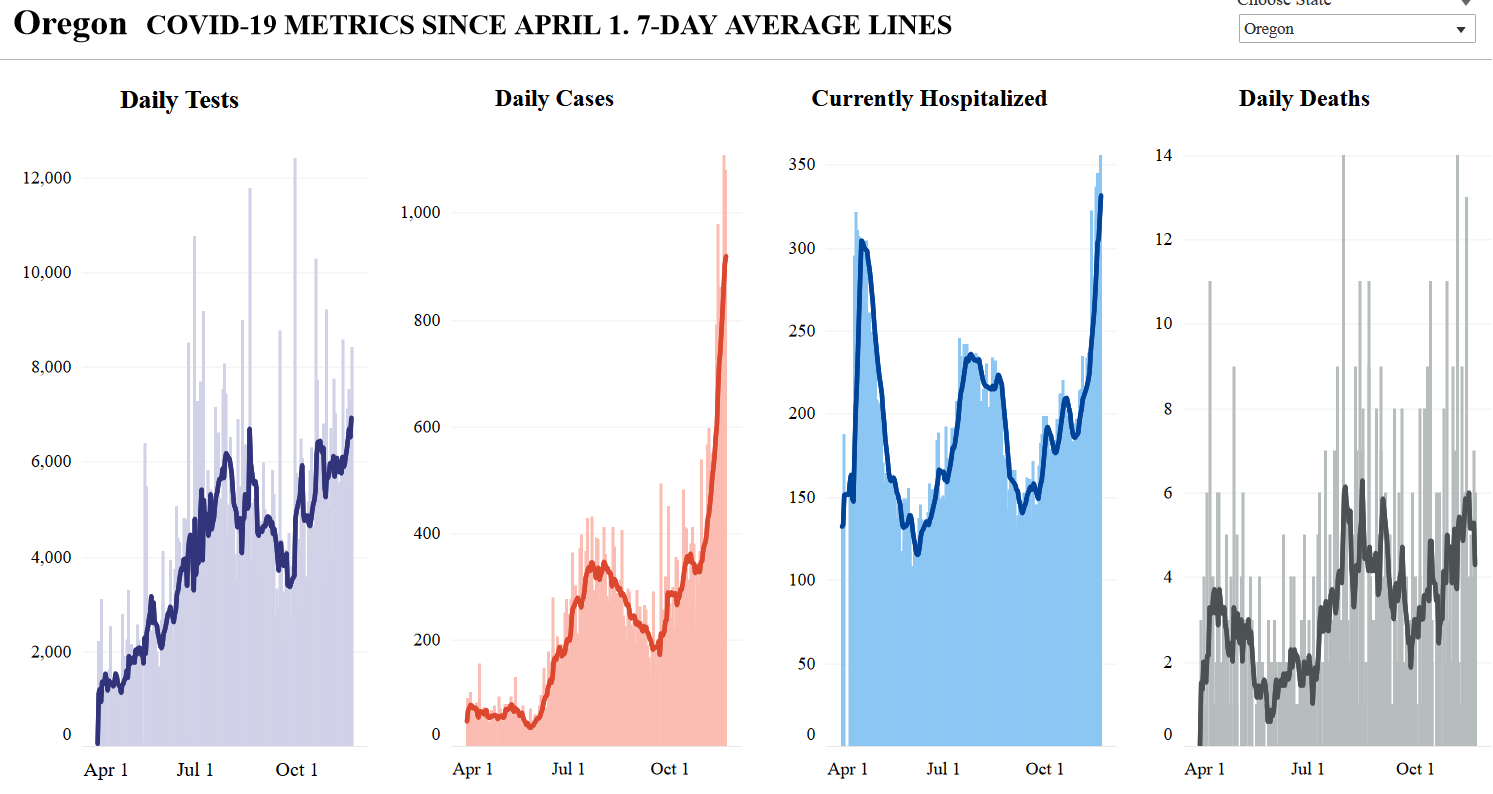 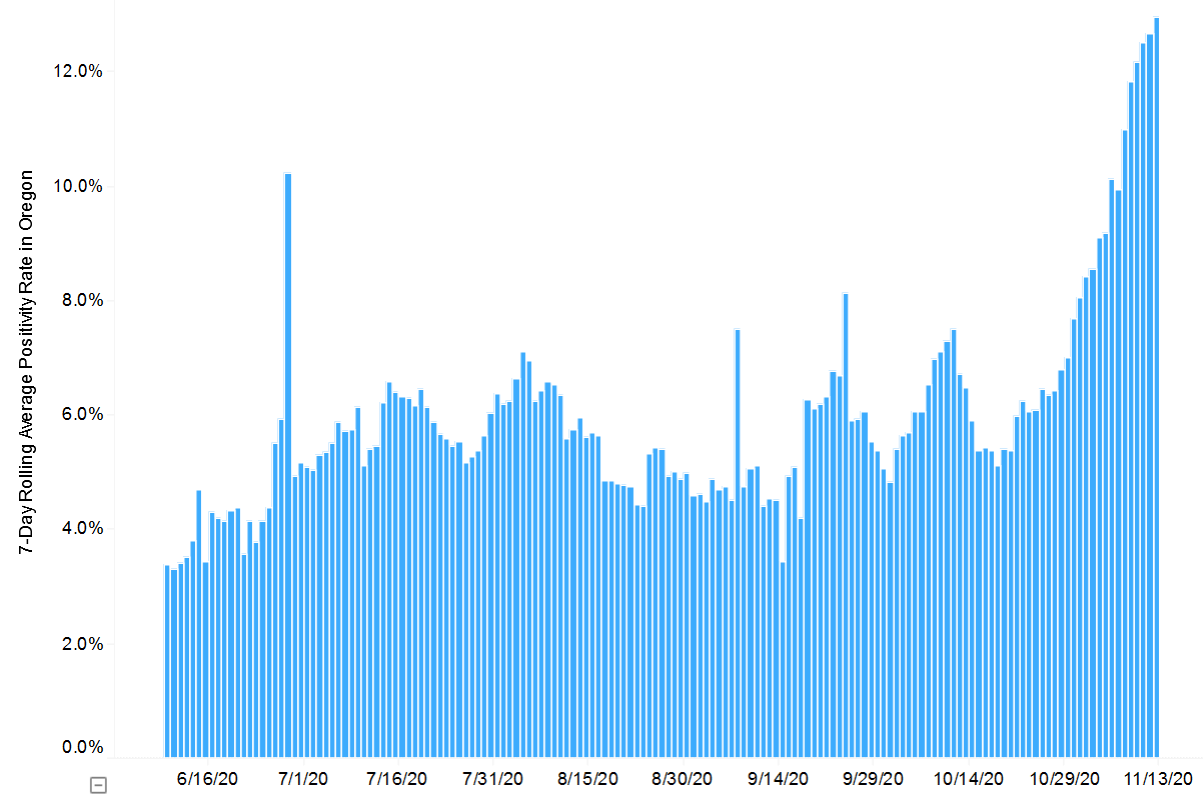 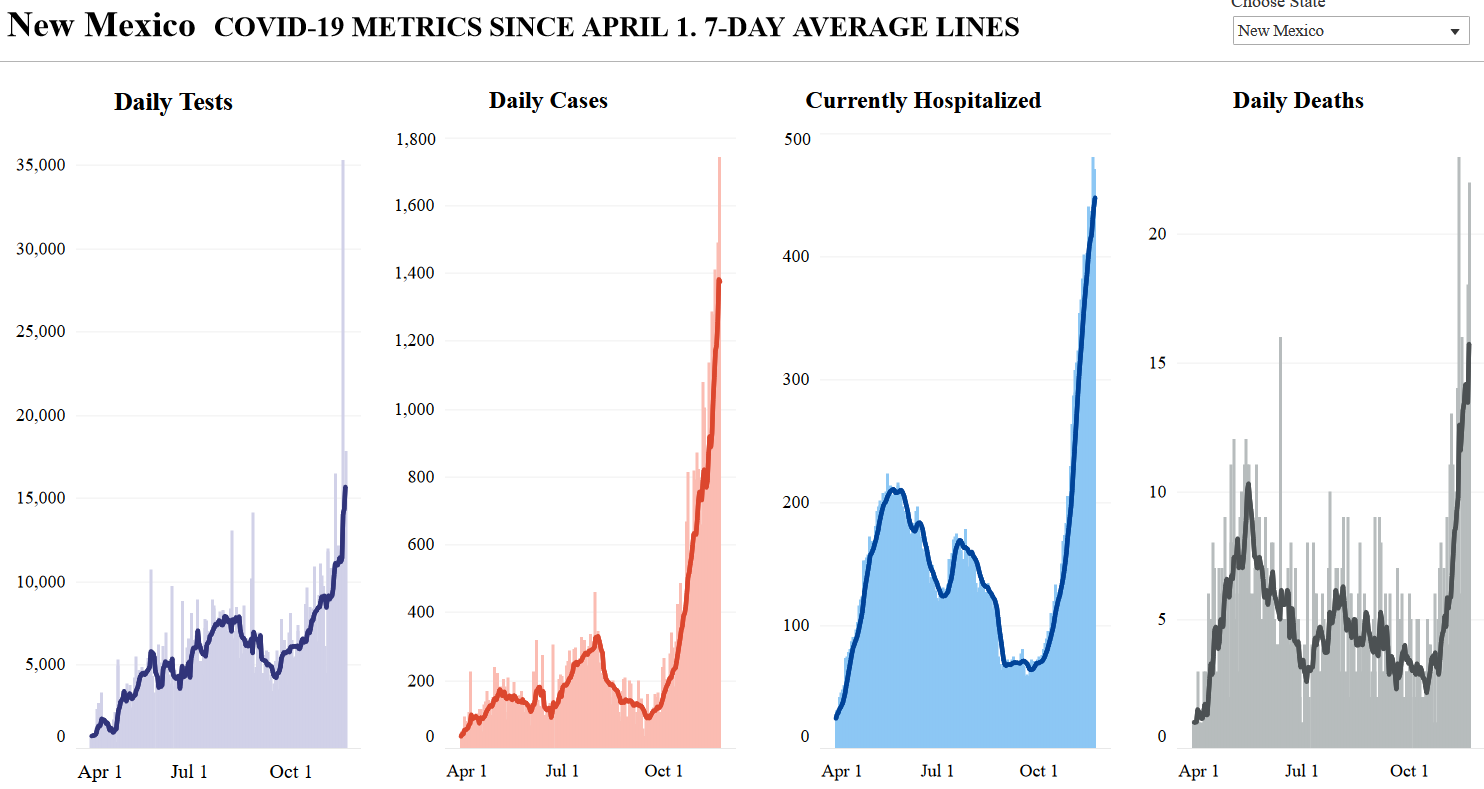 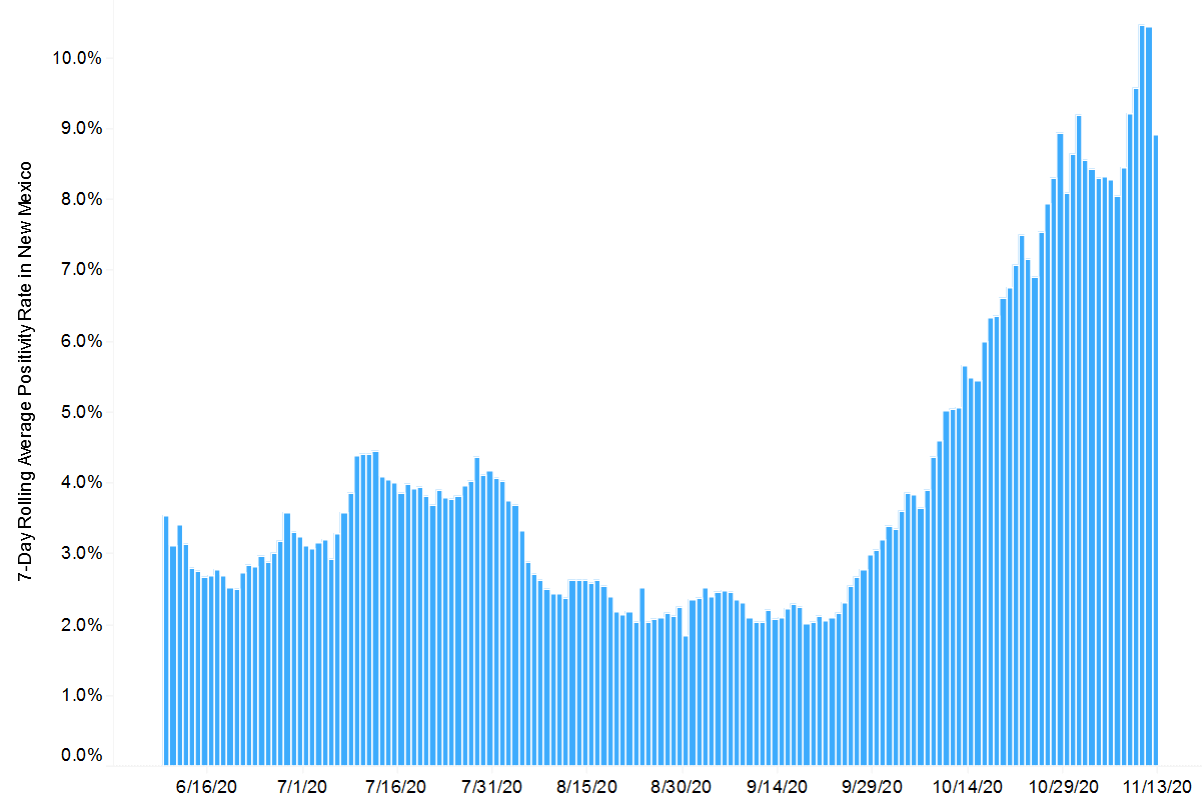 In both states (especially New Mexico), the data are clear: the virus is spreading uncontrolled, so drastic action is necessary.

3) This does not mean, however, that such drastic action is necessary everywhere – particularly for states or cities that got hit hard earlier this year and thus are much closer to the herd immunity threshold.

For example, here are the charts for New York City (source):

And here’s the statewide hospitalizations per million chart: 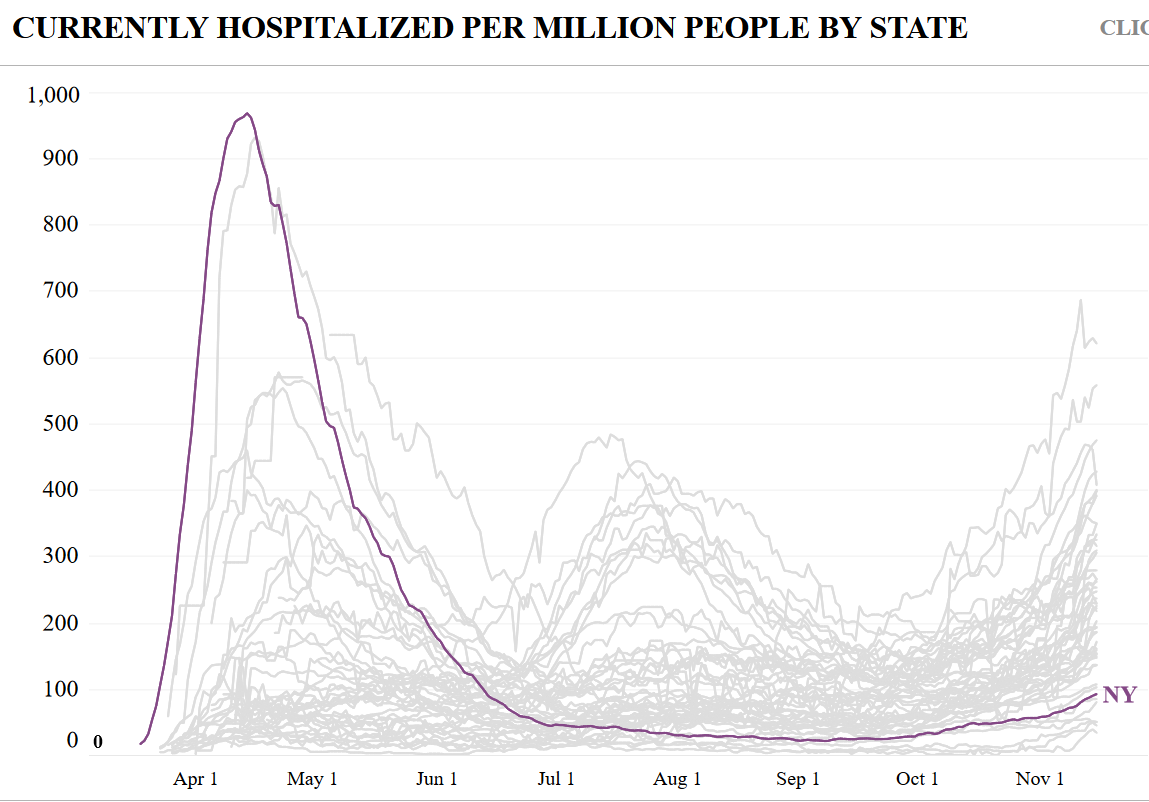 Lastly, let’s look at Florida, one of the FACT states that was hit hard in the second wave (the data is similar in AZ, CA, and TX): 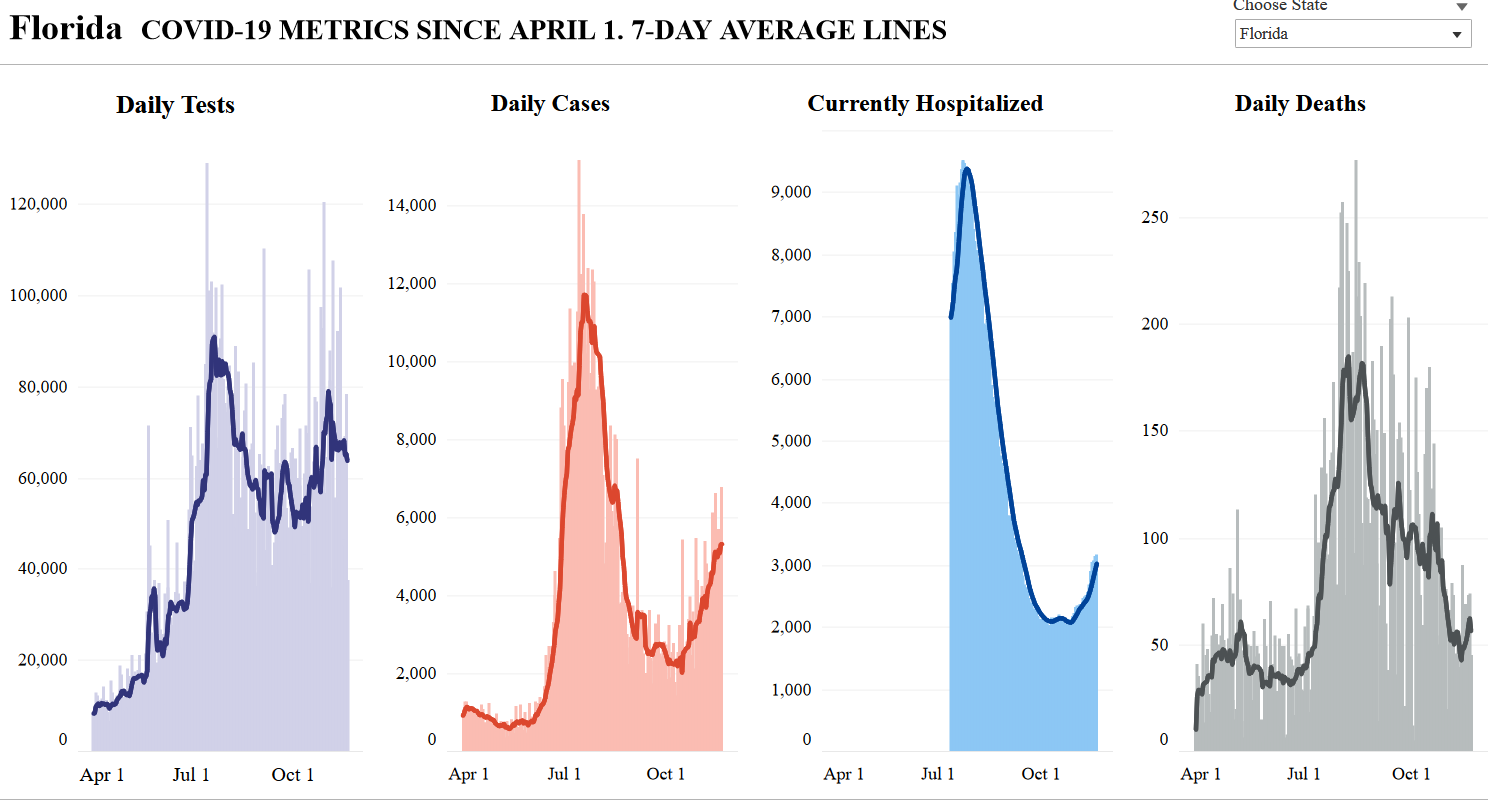 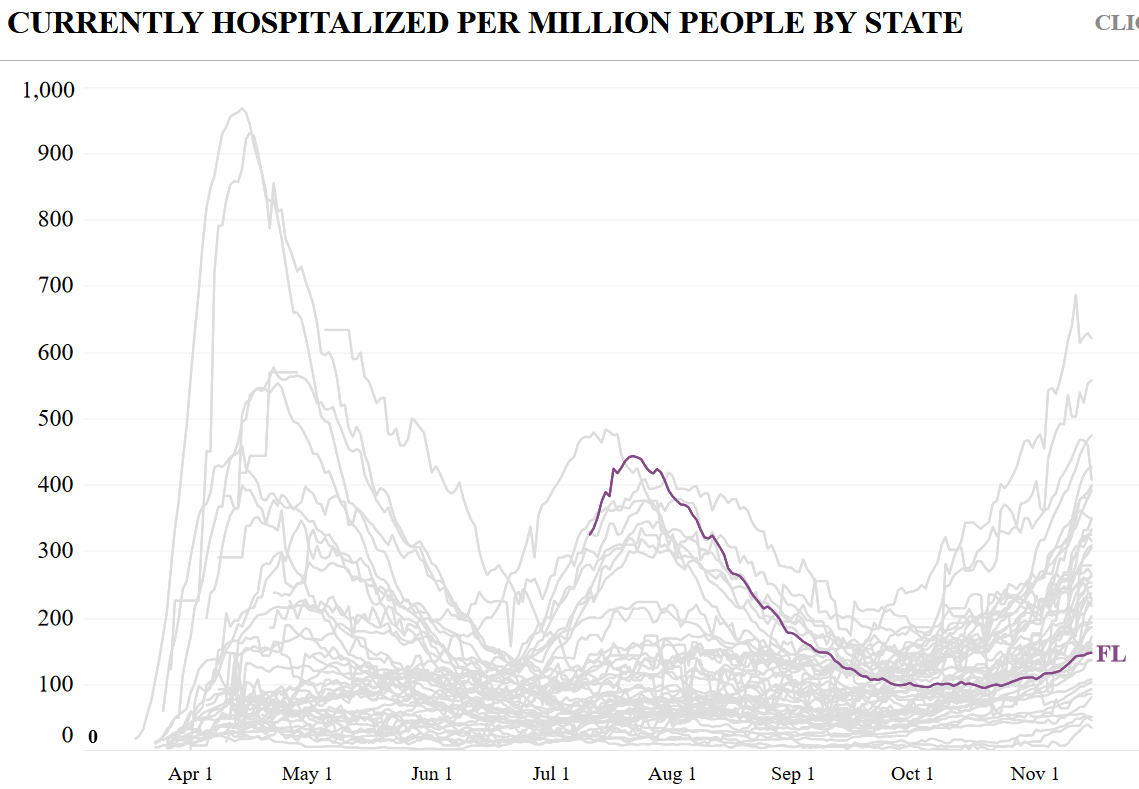 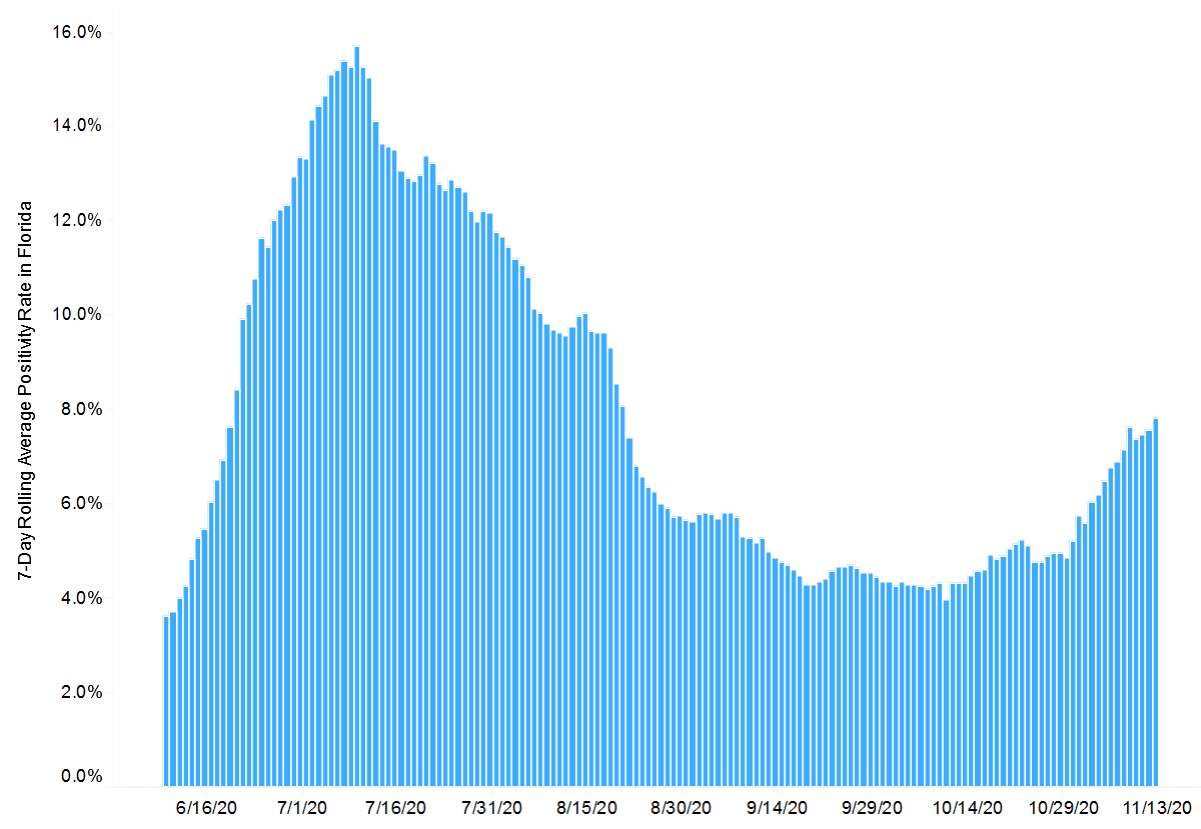 Again, the data here are clear: the virus isn’t spreading nearly as rapidly in New York and Florida (likely mostly due to the greater level of population resistance in these states). Therefore, while New Yorkers and Floridians can’t ignore the virus – a high level of vigilance is still needed – it doesn’t have to be nearly as extreme as is clearly necessary in Oregon and especially New Mexico.