This Tech Trend Is About to Experience Exponential Growth

Editor's note: Today, we're sharing an essay from our colleague Jeff Brown, editor of Brownstone Research's Exponential Tech Investor newsletter. He's a Silicon Valley insider and tech millionaire... and he led his readers to massive gains with shares of tech giant Nvidia (NVDA). But right now, he's identified a way to play another tech trend he says could be even bigger...

I had been invited down to Rancho Santana on the Nicaraguan coast to speak to a small group of wealthy investors and family offices. The agenda was to discuss a technology investment idea that was safe enough for "family money" but still offered incredible upside.

Behind closed doors, in a small conference room overlooking the Pacific Ocean, I rose to address the audience. I began:

I'd like to talk a little bit about exponential technology, for context...

When you look at a typical graph, you see a very linear progression. So if you think about consumer electronics, how they just tend to increase and improve 5% a year, how your refrigerator gets 5% more energy-efficient every year, or how automobiles improve their fuel efficiency, that's linear technological progression.

Exponential is very different. It means that every year or every two years... it keeps doubling. You get to a point where you get to the elbow of the curve and you start to really accelerate in terms of what the technology is capable of doing.

To drive the point home, I showed this chart: 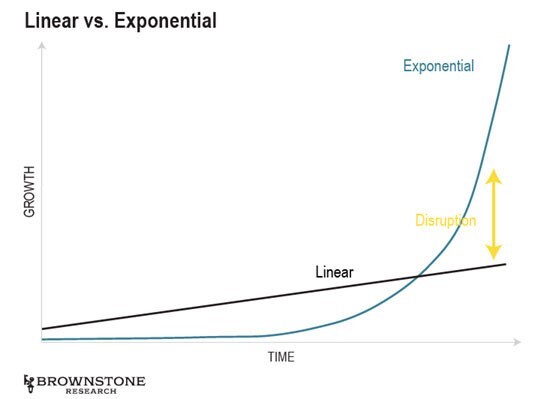 The point I was making is that humans are very good at thinking of linear growth, the black line. We tend to think things will progress steadily, at more or less the same rate, year after year.

But most of us are not capable of appreciating exponential growth, the blue line. Exponential growth sneaks up on us. It appears linear at first. But then it reaches a sharp "elbow," and the trend goes vertical.

In hindsight, it's easy to spot exponential growth.

Exponential growth is the reason why it now costs less than $1,000 to sequence a human genome today when it cost $100 million in 2001.

Exponential growth in the processing power of semiconductors is the reason why the smartphone in your pocket has more computing power than the systems used to send a man to the Moon.

And exponential growth is the reason why companies like Apple (AAPL), Amazon (AMZN), and Netflix (NFLX) have returned thousands of percent to investors in the span of just a few years.

As an investor, spotting exponential growth trends is one of the best ways to identify a truly life-changing investment opportunity.

That's what I presented that day in Nicaragua when I recommended Nvidia (NVDA)...

Nvidia is a semiconductor company known today for its graphics processing units ("GPUs"). Nvidia's GPUs are used to run artificial intelligence ("AI") programs, among other things. We can think of it as the "workhorse" for AI applications in data centers today.

I'm certain readers have heard of Nvidia. CNBC covers it almost daily. It's regularly profiled in Bloomberg and the Wall Street Journal. But back in 2016, when I recommended the company, it was wildly misunderstood.

From my presentation again:

Nvidia, the company that I'm going to speak about, is a semiconductor company. And it's governed by Moore's Law...

One of the interesting things is that Wall Street often misunderstands Nvidia. The reason is, they still have this old perception that it's just a gaming company.

I went on to say that Wall Street was not accounting for the exponential growth we were about to see in AI applications for data centers. And investors did not understand that Nvidia's products were perfect to accommodate this demand.

But for investors who could appreciate exponential growth, this presented an incredible opportunity. Have a look at how Nvidia has performed since that day in 2016... 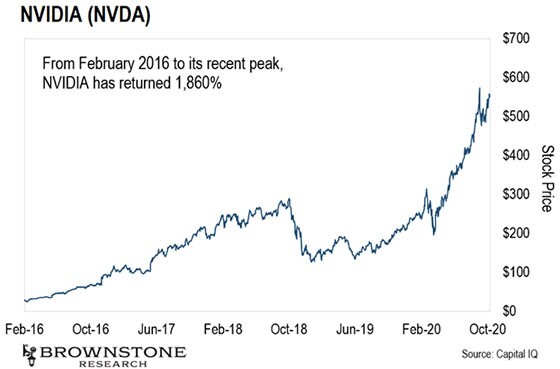 From February 2016 to its recent peak, Nvidia has returned 1,860%. Every $10,000 invested would have turned into $196,000. That's an incredible return from one stock in just a few years. And it has everything to do with understanding exponential growth.

Now – at the right valuation – I still think Nvidia is a great long-term investment. But the bulk of its exponential growth has already come and gone.

I want to share with my readers the next exponential growth trend and reveal the stock I believe could rival Nvidia in the years ahead...

The tech trend I think is on the cusp of exponential growth is this: fifth-generation (5G) wireless networks.

Remember, 5G is the next generation of wireless networks. And 5G speeds will be as much as 100 times faster than 4G.

My boots-on-the-ground research confirms this. Recently, I traveled across the country on a 5G "heartland tour" to show what these networks can do: 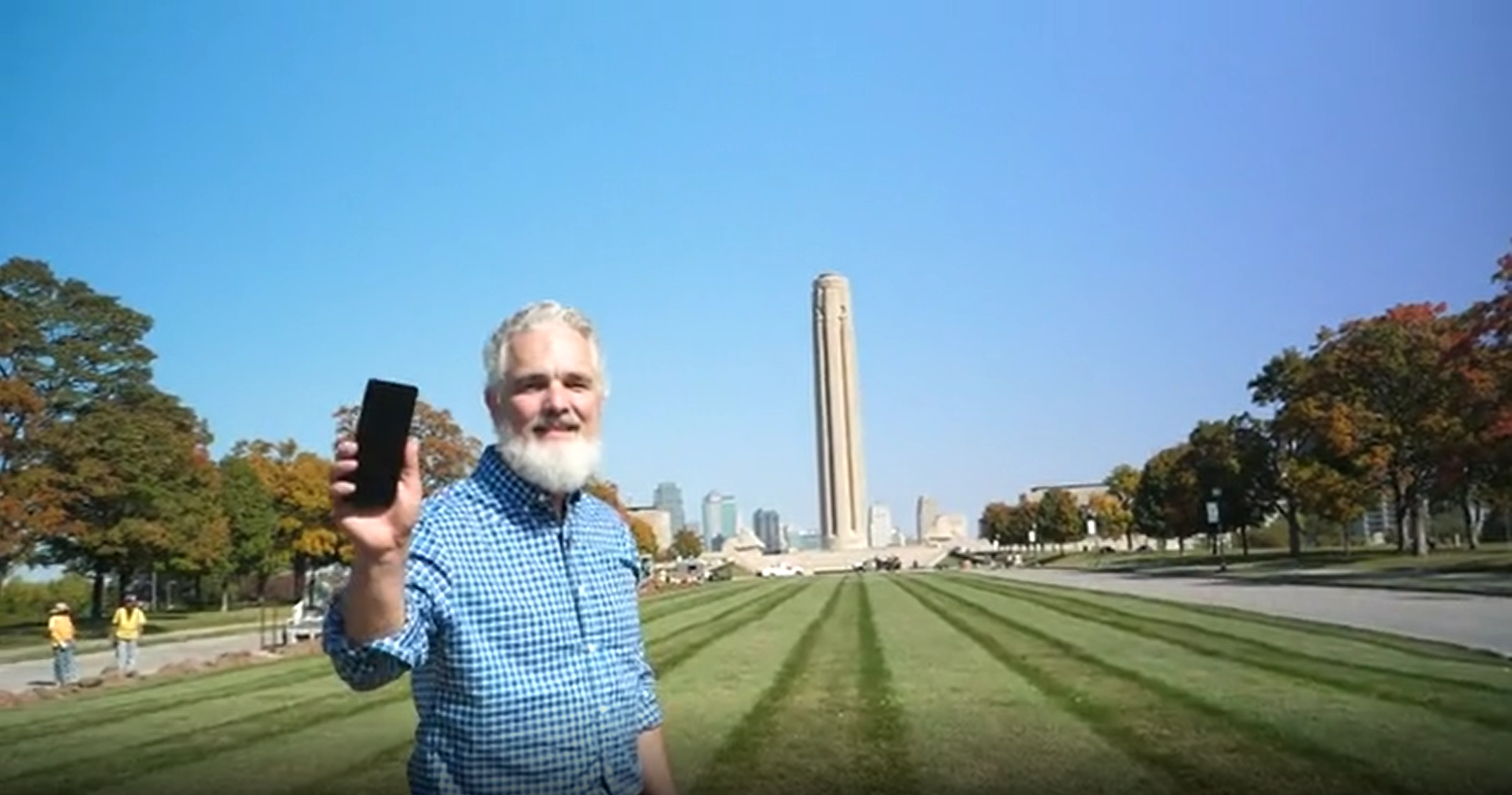 I know what you may be thinking...

5G has been done to death by this point. Every major news outlet has already reported on 5G (for better or worse). And many people are probably convinced that the largest gains have come and gone.

That's simply not the case.

For the U.S. market alone, it's expected that the major wireless carriers – AT&T (T), Verizon (VZ), and the combined T-Mobile/Sprint (TMUS) will spend as much as $275 billion on 5G wireless infrastructure.

Put another way, this will result in an estimated three million jobs created and $500 billion in GDP growth... again, just in the U.S.

This is the largest, most significant communications infrastructure build-out the world has ever seen.

Now, most investors probably think the best way to gain exposure to 5G is through wireless network operators like AT&T. Or perhaps they want to invest in companies producing 5G smartphones like Apple.

At the right valuation, those might be good investments. But they will never create transformational wealth from 5G.

The real wealth will come from the next-generation applications that 5G is enabling.

When our 4G networks were rolled out back in the early 2010s, they too brought faster speeds and lower latency than the network before it. But the really exciting thing about 4G was the new applications it brought about... companies that couldn't have existed without its help.

The newfound bandwidth from 4G networks led to an explosion of services that made our lives far more convenient than ever before... On-demand "taxi" services popped up – e.g., Uber (UBER) and Lyft (LYFT). Social media became available at the touch of a button on our smartphones – e.g., Facebook (FB), LinkedIn, Twitter (TWTR), and Instagram. Even shopping was possible during a quick, five-minute break – e.g., Amazon.

Similarly, FaceTime and Skype video calls with friends and family weren't possible over 3G networks. 4G enabled these, allowing us to "video chat" in real time with others.

It also enabled services like GoToMeeting, Zoom (ZM), and Webex. These videoconferencing services are useful for the business world, especially when team members are working at different locations. Many of us have become newly familiar with these apps during the pandemic, which led to a surge in remote work.

Without a high-speed wireless connection with plenty of bandwidth, some of the biggest companies in the world either wouldn't exist or would be just a fraction of the size they are today.

And 5G will enable the same kind of growth...

With 5G wireless technology, we'll be able to ride in self-driving cars that can communicate with other vehicles on the road... and we'll see fleets of autonomous semis rolling down our nation's highways. These cars (or trucks) need to leverage 5G's fast, nearly delay-free wireless networks to operate safely.

We'll also experience incredibly realistic augmented reality ("AR") applications, which are going to proliferate when combined with 5G-network connectivity. This will offer new experiences in gaming, shopping, and communication.

Not only that, but artificial intelligence and the Internet of Things ("IoT") will bring about "connected" cities... Sensors operating at the "edge" of 5G networks will be able to monitor traffic patterns... water distribution... waste management... electricity distribution... agricultural conditions...

This is what 5G will deliver. But most investors will miss these gains completely. The good news is, you don't have to be one of them...

The Stock to Rival Nvidia

At the start of this essay, I showed you the power of investing in an exponential trend. We're at the very beginning of the next major exponential growth story. Only this time, I predict it will play out over months and years, not decades.

And I've found one stock in particular that could even rival the 1,800%-plus returns in Nvidia. This company has major growth ahead as the 5G rollout continues. You can find out all of the details – including the name of this company and its ticker symbol – by clicking here.

Editor's note: Jeff is one of the best tech investors we've ever met. So when he says he's found a company that could be the next Nvidia, we took notice. He reveals the name and ticker – for free – in this brand-new presentation. Get the details here.