This Isn't What I'm Looking for in a SPAC Deal

23andMe is a well-known brand name and a leader in its emerging industry. It has an elite group of venture capital, asset management, and pharmaceutical industry investors… and is led by well-respected CEO Anne Wojcicki. She and her sister Susan, who has been CEO of YouTube since 2014, are so successful that their mother wrote a book about raising successful people.

VG Acquisition is a SPAC sponsored by British billionaire Richard Branson, a person not only celebrated for his glamour and wealth, but also associated with arguably the most successful SPAC of all time. His space-exploration business was merged into Chamath Palihapitiya’s first SPAC to form Virgin Galactic (SPCE), which is up more than 5 times since it listed in September 2017.

With the big jump in VGAC shares on the deal announcement, the familiar brand name of the target, and the celebrity of the SPAC sponsor, it’s no surprise that a couple of people have asked me what I think of the deal. Fortunately, I found someone who had already done all the work…

There’s a lot of dreck on Financial Twitter (‘FinTwit’), but every once in a while, you come across a comprehensive analysis that’s better than 95% of the research published by Wall Street broker-dealers…

With full credit to the anonymous FinTwit account @BluthCapital (named for the family at the center of the hilarious comedy Arrested Development… watch it if you haven’t already), I present the case for why you should not buy the VG Acquisition SPAC. Whoever is behind @BluthCapital is clearly a pro.

Before we go into why I think this $3.5 billion SPAC deal is one you should avoid, here are the basics on 23andMe…

The company gets its name from the 23 pairs of chromosomes that exist in humans with normal cell development. It was founded with a direct-to-consumer business model of charging a fee to genotype your DNA. Test results reveal your ancestry composition and highlight regional or ethnic influences, some of which may come as a surprise.

23andMe also shows you which diseases you’re predisposed to and tells you which genetic diseases you are a carrier for. It can, for example, detect the BRCA mutation that predisposes you to breast and ovarian cancer – something a doctor can test for, but insurance companies may not cover without a family history of these cancers.

During its time in business, 23andMe has built a database of all the genotyping results. The company has famously – and sometimes awkwardly – led users to discover half-siblings and other family members that they didn’t know existed through its DNA Relatives service.

Ten million consumers have been genotyped, and 80% of them have consented to sharing their data for medical research purposes. 23andMe is hoping to leverage this database that it has built over its 15 years to sell information that pharmaceutical and biotech companies can use for drug development.

Both my colleague Enrique Abeyta and I have written recently about how companies are coming to market in initial public offerings (“IPOs”) later and larger than they have historically, which lets more of the value of the early years of hypergrowth to accrue to venture capitalists and other early investors, before public investors ever get a crack at it.

I’ve noticed that a lot of the recent IPOs that hold promise to me as businesses – not necessarily as stocks, because of valuation – were founded around 2011 or 2012. Founded in 2006, 23andMe had an extra five or six years to establish its presence and become profitable.

But 23andMe has never made money…

This deal offers you the opportunity to buy into a company that has been around for 15 years and raised over $850 million but has never turned a profit.

That’s not the worst of it… 32 pages into VG Acquisition’s deal deck, we learn that 23andMe’s revenue this year is expected to be down by 50% from 2019 levels. Take a look…

So, not unlike many recent tech IPOs, 23andMe looks to be priced at around 16 times forward sales. But most companies getting the high-flyer valuations of 10, 15, even 20 times sales are growing 100% per year, or close to it. They certainly aren’t seeing revenues decline by 30% per year the past two years!

Also note in the chart above, at the same time sales are projected to get cut in half, from 2019 to 2021, the company is pulling back on marketing spend… reducing it by more than 75%.

The name of the game as a venture-backed company is big growth and big total addressable market (“TAM”). Given that the company raised $83 million in a Series F venture round in late December 2020 and will be receiving more cash through this SPAC transaction… why pull back on marketing spend now? The pro forma cash balance once the deal closes will be $900 million… Why is the company cutting costs that could theoretically get the top line humming again? And especially why now, when revenues were down 31% last year?

Maybe the answer is that the TAM isn’t as big as investors and management thought over the past 15 years of pouring money into the company.

In January 2020, 23andMe laid off 100 people – about 14% of its total staff. According to a CNBC article at the time, CEO Wojcicki “didn’t have a clear explanation for that, but cited a variety of factors, including both recession fears and privacy concerns.”

I don’t buy the recession argument… As we all know, digital everything exploded last year. So did most items that offer a perceived benefit to health and wellness – from Peloton (PTON) bikes to vitamins to even oranges. 23andMe is projecting weakness to continue into 2021, when strong economic growth is forecast for the second half.

Privacy could be a factor… While I’ve given up on maintaining most elements of privacy in a social media world, I personally would never try 23andMe given the structure of our health insurance system and the tenuous protection we have against penalties, elevated pricing, and exclusions based pre-existing conditions. For my health, I would like a genomic analysis. But for my wallet, it’s too risky… Maybe when I’m over 65 and on Medicare.

Whatever the reason, the financials are a red flag for 23andMe… and so is the roster of who’s putting money into the SPAC deal.

When 23andMe merges into VG Acquisition, Wojcicki and Branson will each invest $25 million into the new company. It’s a vote of confidence, as is the $200 million of fresh money that institutional investors like fund giant Fidelity will commit to the deal.

That all sounds good. But the problem isn’t who is in… it’s who’s out. As @BluthCapital explained… 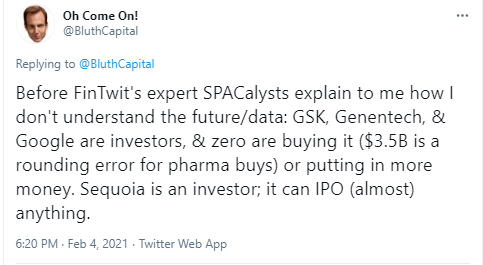 If the future of the company is in data for health care, it’s notable that two existing investors which are giant, global health care corporations – pharma company GlaxoSmithKline (GSK) and Roche’s (ROG.SW) biotech arm Genentech – chose not to re-up in this round… same with Alphabet’s Google (GOOGL) – another company known for its thirst for data. Google, its founders, and its venture arm have also shown interest in investing in life-extension technologies… so why not put more money into this one?

It’s also suspicious that while 23andMe was shopped around to SPACs, no strategic buyer emerged… a $3.5 billion deal, as @BluthCapital notes, is chump change to Big Pharma.

There are more red flags identified in @BluthCapital’s brilliant tweet thread, including call-outs of misleading charts in the deck and the need to reach back six years to find a media quote that properly touted the company. (You can read the whole thread here.)

So… what’s going on?

First, 23andMe is likely going public through a SPAC because it might not be able to adequately address the concerns that institutional investors would raise during the road show for a traditional IPO. Second, going public via a SPAC will create a currency… and allow the investors who have been in for years a path to exiting their investment. If those insiders sell their positions, it will put pressure on the shares in the future.

I’ll let @BluthCapital sum it up… 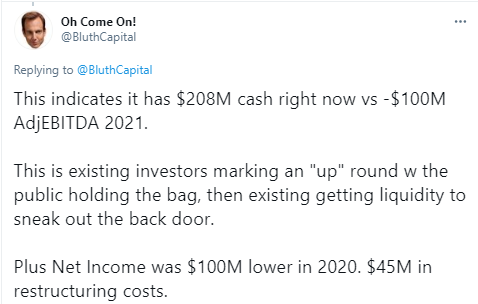 Suffice to say, there are a whole lot of red flags here… Avoid shares of VG Acquisition, which will trade as 23andMe with the ticker ME after the merger is complete.

While I think you should take a pass on VGAC shares, I highly recommend you check out this hilarious YouTube video about the current SPAC craze…

This morning, hedge-fund investor and SPAC sponsor Bill Ackman tweeted out the music video for a rap song waxing poetic about the golden age of SPACs. You can watch it here… It’s hilarious!

Unfortunately, the SPAC sector is full of potential landmines like VG Acquisition…

A white-hot corner of the market like this creates some great investment opportunities… but it’s also full of charlatans and stock promoters. As an investor, you need to be careful when investing in SPACS. And if you do dip your toes into the sector, it’s critical to have a guide like Enrique.

He launched his Empire SPAC Investor product to show investors the right way to invest in SPACs – and separate the opportunities from the traps. And right now, Enrique thinks SPACs will present some of the best short- and long-term investment opportunities he has seen in his 25 years as a professional investor – including running billion-dollar hedge funds on Wall Street and while here at Empire Financial Research.

You can learn more about Empire SPAC Investor right here.

In the mailbag, reactions to Enrique’s guest essays about selling puts on stocks you like in order to generate income and/or lower your purchase price…

Has anyone tried 23andMe? Any great revelations in terms of your ancestry, relatives, or health? Would you do it again? Do other people share my privacy concerns? Send your thoughts in an e-mail to [email protected].

“Have been selling puts for about 4 years. Enjoy receiving Enrique’s suggested stocks for put selling and have done well so far.” – Bill S.

“I have been using this strategy for 3 years since I have been retired. Make more money now than when I was working. Looking forward to your [Enrique’s] picks.” – Mike D.

“You are a smart guy, probably smarter than any of your readers. But this clearly shows that you are out of touch with your readers as well. Most folks saving for (or in retirement) have their money in an IRA or similar tax deferred products. You can’t sell puts in an IRA. You can sell covered calls. So retirees like me have to use a taxable brokerage account to follow your strategy, which I will when I will follow your service, but with a much smaller set of funds available. Your Elite Trader works for IRAs, in fact since your holding periods are so short, the IRA protects paying capital gains immediately, too.” – P.P.

Berna comment: Good point on the taxes, P.P. It frustrates me as well that you can’t do these basic options strategies in an IRA or 401(k) account. You also usually can’t buy foreign stocks. I’m not sure the rationale for this.

It’s an interesting point that covered calls are allowed… especially since their risk profile is quite similar to a put sale. I’ve actually thought about putting together a product that includes covered-call writing, which as you mention is allowed in tax-deferred accounts. I would love to hear from readers if this would be something of interest.