This 'Chatbot' Came Out of Nowhere... It's Suddenly Everywhere... And It's Raising Serious Concerns

Until a week ago, most of you had never heard of ChatGPT...

And I'm willing to bet that some – if not most – of you still haven't heard of it... especially if you don't spend your days on social media or all things tech.

But out of nowhere, the so-called "chatbot" is seemingly everywhere.

After being rolled out on November 30 by seven-year-old tech firm OpenAI, within a week more than 1 million people had signed up to try it... making it the fastest uptake in tech history. That's because in seconds, ChatGPT can supposedly write research papers, college reports, and so much more.

Backed by tech giant Microsoft (MSFT) and co-founded by Tesla (TSLA) CEO Elon Musk – who no longer has any involvement – OpenAI bills itself as an artificial intelligence ("AI") "research and deployment company."

Or as The Information's Jon Steinberg wrote last year in a profile of OpenAI co-founder and CEO Sam Altman...

Altman's top-secret research lab is dedicated to building not just artificial intelligence, but artificial general intelligence [AGI] – that is, an AI indiscernible from human intelligence, powerful enough to write novels and design software and to generally outperform Homo sapiens at everything they have always done for themselves. Altman calls AGI his "sci-fi AI dream."

It doesn't matter if this is a sci-fi dream or not...

The ChatGPT part of OpenAI isn't the first and won't be the last chatbot – or AI-driven tool, robot, or whatever you want to call it – that strikes fear into the hearts of writers, researchers, artists, and even photographers.

Already, so-called "generative AI" is producing photos and other types of images that are typically licensed to photographers, designers, and artists.

I used one I created on this site to help illustrate one of my recent Empire Financial Daily essays, which I published on LinkedIn... 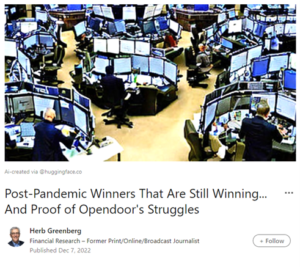 I'm beginning to think a bunch of the seemingly precarious photos and videos I'm seeing on such things as Facebook's "Reels" and other social media are made up. (They're that good.)

But as of last week, most of the buzz has been around ChatGPT... in part because of the sophistication of what it can do, but also the level of concern it has sparked.

More broadly, there's no getting around the wonders and benefits of AI.

It's everywhere, and its use will only grow over time... in everything from medicine to investing and everything in between. Made a call to a call center lately? Chances are you reached an AI-created robot. (Maddening, right? If you said yes, like me, you're showing your age.)

For me, AI has shaved hours off of my research process. I use the data service Sentieo, for example, to very quickly search and compare SEC filings and transcripts of earnings calls or investor meetings... for words, phrases, and commentary.

And I'm currently trialing a newer service, Bedrock AI, which uses machine learning to automatically score the risk associated with companies through its AI-generated forensic reviews of SEC filings and more. Among its goals: to eliminate the need to blackline quarterly and annual filings by flagging the changes that matter.

As for actually using AI to write reports... For well over a decade there have been simple AI-generated research reports, written as text, derived entirely from the data.

Chatbots like ChatGPT take all of that not just a step further, but galaxies further...

Assuming the information is accurate, they can be a tool in researching almost anything. There's plenty of chatter that these types of bots will be the next iteration of searching the Internet.

Like the veracity of who actually is writing high school and college essays, legal documents, and plenty of what you'll see on the Internet – potentially fake. (Of course, there'll probably be AI to detect that, too.)

Here's the bigger picture, as one smart friend puts it...

My suspicion is that the current use case people are thinking about will not be the end use. As with Blockchain (crypto is not the end use, record storage is) there's probably a far more prosaic but much, much larger business opportunity for generative AI.

My guess is that call centers won't exist in 20 years, IT help desks will be obsolete, much low-level tutoring will be automated, and so on.

Writing something with original thought will never be replaced. Inspiration remains a human activity. But answering a question that has already been asked – that's the real sweet spot for this technology. It's too early to know the applications... but if I were laying my bets on how this will actually change the world (and not just markets), I'd be looking for that.

The other part is that people are going to worry that this will take service jobs. But this will be the same way robots "took" factory jobs. They were actually a massive productive boost. To the extent this replaces the lowest end of the service sector it could be a generational productivity driver similar to automation and globalization.

My biggest fear, obviously, is that AI and chatbots like ChatGPT will replace the very likes of... me.

The good news – it won't. And that's not because I'll likely be long retired, or (gasp!) dead, by then.

How can I be so sure? The bot itself told me so. In response to my question whether ChatGPT will make writers and researchers irrelevant, the bot responded:

It's exactly what you'd expect a conniving bot to say.

Before we go, one other thing...

Imagine what would've happened if ChatGPT had been rolled out by a public company during the bubble.

As it stands, Microsoft's stock rose 6% the day OpenAI opened ChatGPT to public signups, likely sparked by the buzz. Microsoft has invested $1 billion in the company, and there have been rumors it intends to invest even more.

But in the easy-come, easy-go world of this market, by the time news broke that more than 1 million people had signed up for ChatGPT, Microsoft's stock gave up all of those gains.

And while ChatGPT and chatbots and all things AI might be hot today, just remember, a year ago all anybody could talk about was the metaverse. Today, as the chart below from Google Trends shows, not so much... 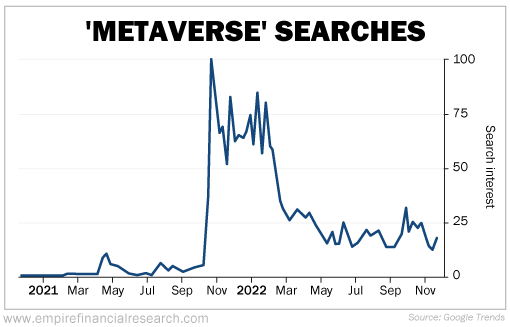 Get a 60-day, 100% money-back trial to Empire Real Wealth by clicking here.