The Update Issue: Restaurants Reboundâ¦ and Managers Scramble for Workers

► The restaurant business is roaring back to health…

The restaurant industry was the poster child for the economic fallout of last spring's lockdowns and the continuing drop in consumer demand for in-person experiences during the pandemic. Last May, when visibility into the future was at its worst, I wrote about the battle for survival at restaurants. At the time, the industry was plagued by capacity restrictions, increased cleaning costs, the need to invest in outdoor seating, and hefty fees for delivery apps.

Fast forward a year later, and things are looking much better... for those that made it this far. According to the National Restaurant Association, more than 110,000 U.S. eating and drinking establishments closed in 2020.

But for those that made it to the other side... happy times are here again. As vaccination rates have climbed and COVID-19 cases have plunged, one of the first things people want to do is go out to eat. That makes sense... What better way to catch up with friends and family members after a long period of separation than sharing a meal?

At the Cheesecake Factory (CAKE), same-store sales in April were 7% above the pre-pandemic levels of April 2019...

And Texas Roadhouse (TXRH) did even better, with April same-store sales up 21% compared with 2019 levels...

Many of these sizable gains were made despite capacity restrictions still in place in many jurisdictions as of April.

Looking at the number of seated diners in 2021 compared with 2019 – since comparing to 2020 numbers yields meaningless results because of lockdowns – we're seeing the number of patrons come close to closing the gap.

The number of seated diners includes both those with reservations and walk-ins. Seated diners plummeted nearly 100% versus 2019 this time last year. But in recent weeks, we’ve seen the drop in diners versus 2019 narrow to the single digits… 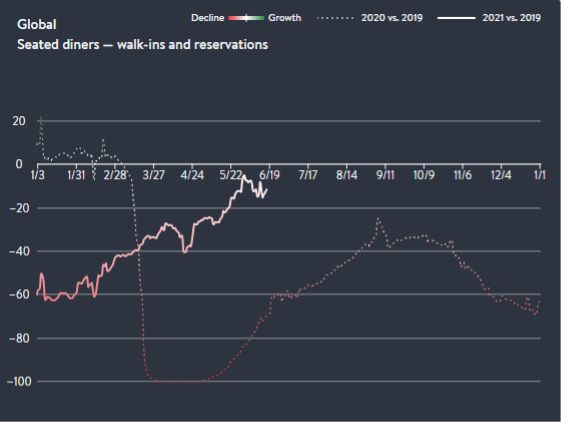 While the industry isn't 100% back versus 2019 levels, it's close... and the trend is unmistakably strong.

Before the pandemic, we had been in a long-term period of secular growth for eating outside of the home – including restaurant going, takeout, and delivery – and a period of decelerating, slow growth for traditional food retailers, aka grocery stores.

The pandemic changed that... but you can see in this chart tweeted by the editor-in-chief of trade journal Restaurant Business Magazine that restaurants are getting their relative groove back... 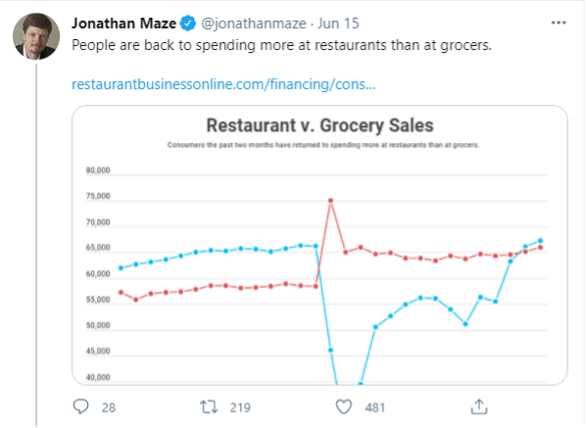 This rebound in restaurant spending is happening despite the relationship between restaurant and grocery inflation returning to historical norms. Typically, restaurant menu inflation significantly exceeds inflation at grocers. 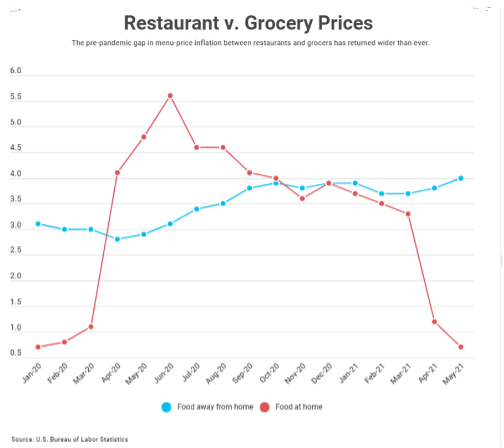 There's no doubt that people want to get out and eat at restaurants... even with rising menu prices.

The jury is still out on whether the increased interest we witnessed in cooking at home will continue with the U.S. fully reopened...

With all these people wanting to eat out, the biggest problem will be staffing the restaurants… 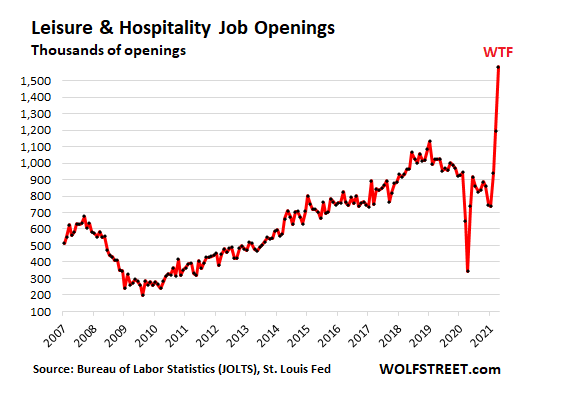 Restaurants and bars added 186,000 jobs across the U.S. in May... But restaurant owners and managers are still left scrambling for more workers.

Elsewhere in the May jobs report, things rebounded a bit from the extremely disappointing April report, when the economy added only 266,000 (later revised to 278,000) jobs versus the 1 million that economists were expecting.

The U.S. added nearly 560,000 in May... a good sequential improvement. But it's still short of the 675,000 prognosticators sought. The unemployment rate dipped to 5.8% from 6% in the prior month. It's at the lowest level since the pandemic began... But there are still 7.6 million fewer Americans with jobs than in February 2020.

With 9.3 million people counted as unemployed and more than 8 million jobs available... the disconnect continues. As I've discussed before, the possible reasons for this disconnect include skills and geographical mismatches between workers and open positions, closed or hybrid schools that keep mothers out of the workforce, and the temporary supplemental unemployment insurance that pays more than some jobs do.

While it's easy to blame all the open positions on the extra $300 per week in federal unemployment benefits, there is no doubt those payments are keeping at least some workers at home. It's probably misguided to explain away all the labor shortage on the extra benefits.

We're seeing the same kind of labor shortages popping up around the developed world, especially in the leisure and hospitality sector, which went from "dead on arrival" to surging demand in record time with the deployment of vaccines.

Consider France – where the $300 supplemental U.S. insurance does not apply… The country is looking at a shortfall of up to 100,000 restaurant and hotel workers, even with hundreds of thousands of people still out of work. According to a May article published in the New York Times...

Restaurants and hotels across the country are facing the same problem. After months on furlough, workers in droves are deciding not to return to jobs in the hospitality industry...

Help-wanted signs hang in restaurant and hotel windows around the country.

The missing manpower conundrum has emerged as thousands of hotels and restaurants that survived the crisis pivot toward trying to make up for an 80 percent plunge in business since last spring. The Covid-19 lockdowns have cost France's tourism industry, a cornerstone of the economy, over 60 billion euros in lost revenue since last year.

"We know we're going to have customers again this summer – that's not the problem," said Yann France, the owner of La Flambée, a restaurant in the popular northern seaside city of Deauville. "The concern is that we won't have an adequate work force at a time when we need to make up for a huge loss in sales."

It seems that during the downtime, many French workers invested time in re-evaluating their career options... and many have decided to seek employment in a different sector. The same is probably happening here in the U.S.

Unlike the U.S. which relied on supplemental unemployment benefits to aid displaced workers in severely impacted industries, France used a state-subsidized furlough program to keep workers afloat. For six months, hospitality employees received 85% of their prior salaries while staying home during the country's more rigorous and extended lockdowns.

But beginning in January, France reduced the rate paid to furloughed workers by 36% and capped the duration of benefits at three months (they were previously good for a year). But the labor shortages at restaurants and hotels persist.

The U.S. federal supplemental unemployment benefits expire in September, but four states ended them last week. Another eight will end them tomorrow. We'll know soon if taking away these benefits reduces local labor shortages in these 12 states and the additional 10 that will pull benefits by the end of June.

My guess is that it will help but not entirely fix the problem, as supplemental insurance is only one of many factors keeping people from taking open jobs.

With record-high unemployment, restaurant owners will be on the edge of their seats to see if these benefit changes shake loose some new employees as they struggle to meet surging demand.

As for the restaurant stocks, the market saw this coming... And many stocks are trading at pre-pandemic levels... or even higher. We're in the early earnings of the business recovery, but unfortunately, the eighth inning of the recovery for many restaurant stocks.

With most of the rest of the world trailing behind the U.S. in deploying vaccines and controlling COVID-19, I still like global player McDonald's (MCD) as a reopening beneficiary outside the U.S.

Come follow me for stock ideas, business trends, and social commentary in far fewer words on Twitter at my @Hedge_FundGirl account. Also, while you are there, check out my colleague @enriqueabeyta's post yesterday about his eight favorite investing books… I know that in the past readers have in the past written in asking for reading recommendations. Enrique answers that question, and at spot No. 1 is my personal favorite, which I have recommended before – One Up On Wall Street by legendary Fidelity portfolio manager Peter Lynch.

In the mailbag, a question about special purpose acquisition company ('SPAC') Pershing Square Tontine (PSTH) and its extremely complicated transaction…

Are you seeing the impact of labor shortages at restaurants and hotels in your area? Have your restaurant dining habits bounced back to pre-pandemic levels? And since I forgot to ask yesterday, are you noticing a surge in pricing for things like Ubers (UBER) and Airbnbs (ABNB) as Silicon Valley ends its customer subsidies at these former startups? Share your thoughts in an e-mail to [email protected].

"Hi there, I've read up on the Pershing Square Tontine Holdings (PSTH) deal in the works. It mentions the issuance of Vivendi (VIV.PA) shares not in the U.S. market. My current broker, TD Ameritrade, does not allow for that right now. So what happens to those shares being issued if my broker doesn't allow?

"Please advise. Thanks. I have really enjoyed much of Empire Research." – Chris D.

Berna comment: Chris, Vivendi plans to list Universal Music Group shares on the Euronext market in Amsterdam. Some online brokers, like Fidelity, Schwab, and Interactive Brokers, will allow you to trade and hold shares that are listed on the Euronext exchange. My understanding is that TD Ameritrade does not. If you own Vivendi OTC ADRs in an account held at TD Ameritrade, I suggest you call TD Ameritrade and ask about what will happen when the listing occurs. Someone from their corporate actions (or similarly named) department should be able to answer this for you.