It’s been slightly more than three months since I started writing Empire Financial Daily. It’s been a lot of fun diving into topics from the isolation economy to “quarandating” and collateralized loan obligations.

Nothing is ever static in the markets. That’s especially true since the pandemic has put societal evolution into hyperdrive. This concept – that years of technological migration have been squeezed into a few months – should be familiar to regular Empire Financial Daily readers.

I regularly scour dozens of publications for interesting stories and ideas to bring to readers, and have my eye on hundreds of companies that I have followed at some point during my more than two decades on Wall Street to bring you the best investment ideas I can.

As I drink from the firehose of the endless information available, I’m constantly coming across important news about former Empire Financial Daily topics.

This is especially true during earnings season, when companies provide plenty of information about their recent past and usually a good window into how they’re contemplating the future. (We’re admittedly getting a little bit less of that lately, with few companies willing to commit to an outlook let alone tangible financial guidance due to the uncertainty introduced by the pandemic.)

Since I’m always thinking to myself, “This would be a great thing to flag for people who read that Empire Financial Daily three weeks ago” but rarely have the space to accommodate more than the deep dive of the day, I’m going to make room on Fridays to occasionally revisit previous subjects when there have been meaningful developments.

In the May 22 Empire Financial Daily, I documented the rise and fall of lingerie giant Victoria’s Secret – once the envy of all of retail, but more recently consigned to the investing dog house. I ended the piece by noting the extraordinary resilience of its sister company, soap and candle chain Bath & Body Works, and recommended the stock of L Brands, the parent of both chains…

On the strength of its Bath & Body Works business and in the wake of its stated commitment to separating the two businesses, L Brands is a buy for long-term investors who can tolerate a little volatility along the way.

L Brands closed yesterday with a market cap of $4 billion. So even after the 18% jump, you’re buying the retail gem Bath & Body Works at an attractive valuation and getting a free call option on its fallen angel sister company, Victoria’s Secret.

Since writing that piece, LB shares are up more than 60%. The majority of these gains were made on Wednesday of this week, when L Brands announced a restructuring plan and offered a sales update that sent shares soaring more than 35%.

► It was a blockbuster announcement…

The headline initiative from the restructuring plan was a 15% reduction of corporate staff, or 850 positions.

The company also committed to heightened inventory discipline at Victoria’s Secret, where markdowns have been a perennial problem and driven gross margins – and ultimately profits – down.

Management noted that spring inventory receipts were already down 45% at the chain and will be down 50% in the fall. L Brands also committed to reducing overhead expenses at the ailing lingerie chain by rightsizing staffing at both the management and store level.

Finally, L Brands will work to lower its cost structure in its U.K. and China operations – neither of which have ever been profitable.

In its business update, L Brands announced sales at Bath & Body Works were up 10% in the second quarter, outstanding performance given the store base was closed for much of the quarter.

While the chain operates a website, sales were historically dominated by the brick-and-mortar channel… with digital sales accounting for only 19% of sales at Bath & Body Works in the first quarter. Victoria’s Secret fared worse, with sales down 40%, but this is fairly average for mall-based retailers in the second quarter. Frankly, it could have been a lot worse.

► Here’s how to value this announcement…

When a company tells me that it’s cutting expenses through a restructuring, I typically haircut the savings in my mind, since some of those savings inevitably end up “reinvested” in some other initiative. So, taking the cost efficiency guidance with a grain of salt, I calculated what $200 million in savings could mean for L Brands’ bottom line.

Adjusting the $200 million in savings for tax impacts, I estimate that this restructuring could add $0.68 per share to earnings. I would put a price-to-earnings (P/E) ratio of 10 times on those extra earnings, thus justifying a $6.80 rise in LB shares. Perhaps not so coincidentally – this is easy math – LB shares were up $6.76 on Wednesday.

In addition to the potential earnings accretion from the newly announced restructuring, it’s equally important that management reiterated its commitment to separating these two businesses. Investors see a break up as the path to realizing value at Bath & Body Works – an absolute gem that has been dragged down by its ailing sister company.

While it’s certainly an exceptionally good time to be in the soap and hand sanitizer business, the 10% rise in Bath & Body Works sales during the second quarter underscores what a truly exceptional business this is. Most retail chains that don’t sell food or home improvement/furnishings items are likely to report sales down in the 30% to 50% range during the second quarter. Clearly, Bath & Body Works is one of the highest performing chains in retail… and the second-quarter performance highlights this.

Right now, LB shares are trading at an enterprise value (“EV”) that’s roughly equivalent to what Bath & Body Works is worth. Even after the big move, you get Victoria’s Secret for free.

► So, what’s Victoria’s Secret worth?

At the low end is the $1 billion that private-equity firm Sycamore Partners was willing to pay for the chain before the pandemic. Since Sycamore walked away from that deal, I’ll discount the price by 30% and say $700 million is the floor of valuation.

On the high end, I’ll estimate that in a semi-successful but not miraculous turnaround – one in which the company fixes the product and marketing, closes unproductive stores, and beefs up the already well-developed online business – it could get to $500 million of earnings before interest, taxes, depreciation, and amortization (“EBITDA”). Using a modest 5 times multiple of EBITDA, Victoria’s Secret would be worth $2.5 billion.

With 229 million shares outstanding, I think Victoria’s Secret could be worth between $3 and $11 per share, depending on how management executes. This yields a price target for LB shares of between $27 and $35, if we assume I’m right that Bath & Body Works, net of the company debt, is worth $24.

With $2.5 billion in cash on hand and another $1 billion available and undrawn on its revolving debt facility, management has the resources to get through the pandemic and time to turn around Victoria’s Secret. A modestly successful turnaround would mean big returns to LB shareholders from here. That said, it’s hard to overlook a 60% return in just over two months – that’s around a 315% annualized return. I would recommend those fortunate enough to have bought LB shares sell half of their position and let the rest ride.

► Up next, my colleague Enrique still hates the shares of AT&T (T)…

When I saw the headline scroll by last week that the telecom company saw a 9% sales dip in the second quarter, I decided to reach out to my colleague – a perennial AT&T bear – to see what he thought.

I previously summed up my and Enrique’s views on the telecom giant in the June 17 Empire Financial Daily. The drop caught my eye, because wouldn’t logic suggest you were supposed to be safe hiding in phone companies and other utilities with high recurring revenue when the economy takes a hit? Here’s what Enrique e-mailed me…

The clock is ticking…

As I’ve been saying for years, AT&T is an ugly position both strategically and financially. My opinion is – with a time horizon of several years – there’s a 100% chance the company ends up cutting (or eliminating) the dividend. I also think the odds are much better than zero that AT&T goes bankrupt eventually.

That doesn’t mean it goes away. When you have more than $200 billion of liabilities, someone will end up owning them… just not the current shareholders.

To put that $200 billion into perspective, if AT&T were a country, it would sit in between Saudi Arabia and Taiwan as the 36th-most indebted nation in the world.

The company reported earnings early last week, and there was nothing there to change my mind.

Sure, AT&T can blame COVID-19… but isn’t this supposed to be a stable business for most environments? Isn’t the company’s supposed stability what allowed it to layer on $200 billion of liabilities?

Revenues were down 9% while profits (EBITDA) were down 6%.

Despite advertising being down 33%, legacy Time Warner (now WarnerMedia) had EBITDA only down 13%. But this resilient performance relied heavily on dramatically lower sports costs in the quarter… and these costs will return in coming quarters. That’s not good for AT&T’s trophy business.

Even the company’s flagship (and most stable) mobile business showed a drop in EBITDA of 1%. Don’t even get me started about the 1 million TV customers it lost in the quarter!

There’s a whole other conversation to be had about AT&T’s quality of earnings and cash flow… but the message is always the same – and has been for years – either sell or stay away.

Meanwhile, take a look at AT&T versus the S&P 500 Index and Nasdaq Composite Index over the past five years… 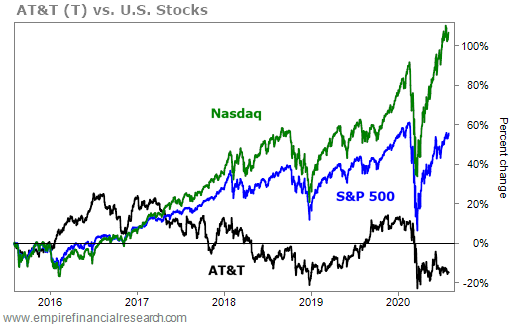 I guess the dividends paid for the stock losses?

► In today’s mailbag, readers react to yesterday’s issue on the advertising business…

Let me know what you think of today’s update format and if you think it’s useful. Also, please write in if there are particular topics you would like an update on – I’ll take your requests into consideration in future weeks. And if there’s something you want to share about Victoria’s Secret, Bath & Body Works, or AT&T… I want to hear about it! Send me an e-mail at [email protected].

► “Like many, I am sure, I watch very few commercials, preferring to watch recorded shows and sporting events, then fast forwarding through the commercials. Seems harsh, for the effort and money spent to create those commercials, but I’m generally not interested. Just saying…” – Wayne J

Berna comment: You’re in good company, Wayne. I know few people who enjoy commercials, other than perhaps during the Super Bowl.

► “Hello, Berna, as you look at advertising, The Trade Desk is worthy of a deep dive. Keep up the good work.” – Rob D.