► In case you missed it, social media giant Facebook (FB) is having a bit of a week...

After suffering the wrath of a whistleblower who appeared on the news magazine 60 Minutes on Sunday, Facebook went on to see its flagship service, along with its other properties – social media app Instagram and messaging service WhatsApp – go down for hours, in an unprecedented outage for the firm. The timing was wild... but according to technical dispatches from the company, these were unrelated events.

By the time Facebook got the apps back up and running, it was already time to turn back to the week's first crisis... the whistleblower.

Yesterday, former Facebook employee Frances Haugen testified to Congress and did the impossible: unite both sides of the aisle. As Bloomberg explains...

Republicans and Democrats were, for once, united on her side, at several points even calling her a "hero." What they needed was direction. Luckily, Haugen gave that to them.

He was correct. Facebook's success as a business boils down to algorithms that bump the most titillating content to the top of users' newsfeeds. These formulas are fundamental to Facebook's success in engaging users but also contribute to the propagation of conspiracy theories on the site and to drawing teenage girls to eating disorders on Instagram. In one powerful moment, Haugen pointed out that, years from now, women would effectively suffer from brittle bones and infertility because of Facebook's choices.

By all accounts, it was a pretty damning testimonial.

FB shares did well after that – although a little less well than GOOGL shares – rising 18% to an all-time high of $382 on September 7. Since then, shares are down 13% to around $330, underperforming the market and the FAANG peers.

The tech glitch made big news, but there's no reason to think that it was any more than a one-time fluke.

However, the accusations made by Haugen are a much bigger problem...

I haven't had the chance to watch her testimony yet, but nearly everyone who has written about it or that I have talked with saw her as credible. And the criticisms she made about the company largely relate to a key element that makes both Facebook and Instagram so profitable: the engagement algorithms.

Once upon a time, in the early days of these apps – when they were sites that you visited on your computer more than they were apps that you used on a smartphone – feeds were generally presented in chronological order of posting, with a few advertisements peppered in.

Now, the so-called "engagement algos" rule the day. They're why you may never see posts from some of your friends you rarely interact with, and why you might see several articles pop up on the same subject.

These engagement algos are also why these sites are so addictive... as well as how the apps can amplify messages that are destructive or information that isn't accurate.

Facebook has your number – and mine too – and knows how to push the buttons that draw you in and keep you coming back.

These algos that suck you in are exactly what makes Facebook such a powerful place for companies to advertise and sell products. And Haugen suggested to Congress that the way the algos work ought to be changed in the interest of society.

But what's good for society is probably not going to be good for maximizing the performance of ads run on Facebook and Instagram... and delivering less bang for the buck on advertising is not supportive of Facebook maximizing its advertising haul – and with that, its revenue and profits.

If Facebook is forced to dial down these engagement algos either by regulation or public pressure, that could be a drag on revenues. And having to redouble efforts and spend much more on content safety and moderation would only pad the expense line, at the same time when revenues may be pressured.

So this PR and regulatory issue has potential to be a business issue that lowers Facebook's earnings growth rate.

So... does that mean it's time to sell FB shares?

The short answer is no, I don't think so.

The movement of advertising from offline media like TV, radio, and newspapers to the digital world – which Facebook and Alphabet dominate – shows no sign of slowing down.

Strong advertising should mean healthy Facebook growth... unless the company loses advertising market share because consumers get mad at it and quit after they hear about the whistleblower testimony. Regulation could also essentially neuter every single one of Facebook's tools to drive engagement.

I'm bearish on the ability of scandals to permanently reduce demand for Facebook and Instagram. We've all known about Facebook's sins for quite some time... Or if we didn't know, we suspected.

Facebook has faced many firestorms before, and it just kept on growing. Despite being horrified by everything we learned, the vast majority of those of us who watched the documentary The Social Dilemma didn't delete our accounts.

Facebook – along with its sister apps Instagram and WhatsApp – survived the scandal of that documentary because have these apps have become too much of a utility engrained into everyday lives for most people to quit them. #DeleteFacebook didn't work last year... and it probably isn't going to work now.

Oh Facebook, we just can't seem to quit you.

I'm mad at Facebook and its management, but I also don't think it is time to sell the stock...

And if you don't own it already, this will likely prove a good time to buy it "on sale."

When it comes to earnings per share ("EPS"), Facebook will earn about $14 this year and about $16 next year. I don't think this is changing... unless Congress plans to get into the business of regularly auditing the company's algorithms (which I don't think it has the skills or will to do).

Facebook has a track record of growing revenues at least 20%... and sometimes much more. This year, top-line growth will be closer to 40%.

With superior growth and phenomenal margins versus other stocks in the market, it's hard for me to imagine Facebook not trading at a premium multiple to the S&P 500 Index, which is currently priced at about 20 times 2022 earnings. I think Facebook deserves a price-to-earnings (P/E) ratio of at least 25, maybe even 30.

That upside justifies holding your nose and buying FB shares. They are a great risk-reward here.

Of course, if Facebook's actions morally repulse you, I'm not going to defend them... nor am I going to say you should buy the stock. At the end of the day, you have to be able to sleep at night. And there are a lot of other fish in the stock market sea.

I'm here to tell you how to make money, not to regulate ethics. So based on earnings power and valuation, FB shares should be a moneymaker from today's price. Whether the shares are how you want to make money – that, I leave to you.

Social media managers at corporations large and small were left with little to do when Facebook and Instagram went down on Monday. With time on their hands, they took to Twitter... along with lots of other regular people looking to kill a few minutes on a social media app.

Twitter's own social team completely leaned into the fact it had become a safe haven for millions of Facebook, Instagram, and WhatsApp refugees, and issued a tweet that welcomed "literally everyone."

Social media accounts from other corporate giants had a field day. I loved this exchange that Twitter had with fast-food chain McDonald's (MCD)... 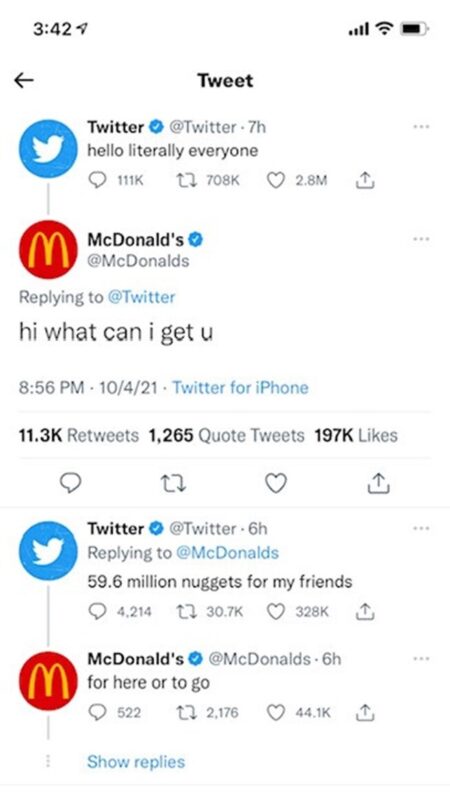 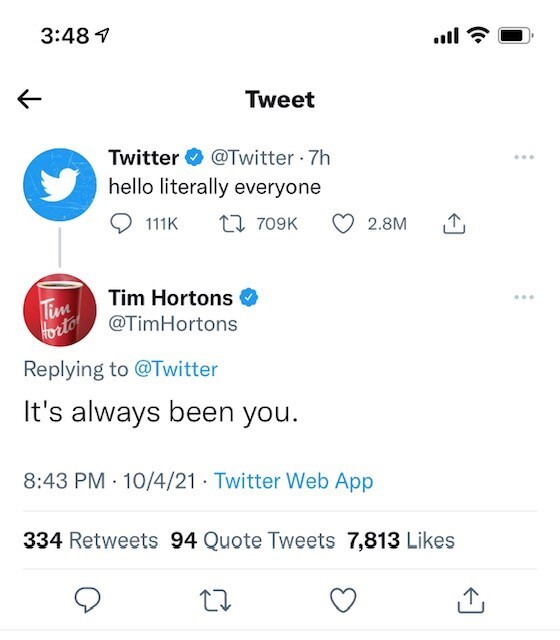 Meanwhile, video conferencing app Zoom (ZM) was late to the party, but made up for it with humor... 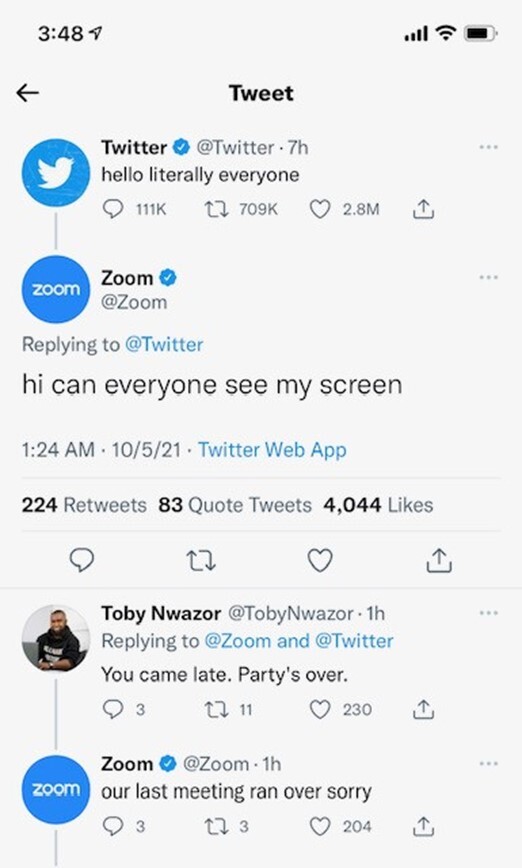 This one may be the funniest one of all, but will likely be lost on anyone unfamiliar with the show. (I'll catch you up on this Squid Game phenomenon in an upcoming essay.)

As usual, social media didn't let a good crisis go to waste when it came to being funny... even though the crisis was about social media this time!

I'm still in Cyprus, where we wrapped up the investing conference last night...

This is an absolutely gorgeous – and surprisingly affordable – place with friendly people, great food, and excellent beaches. It's a location I would definitely recommend for your next beach holiday. Here are a couple of pictures I took yesterday... 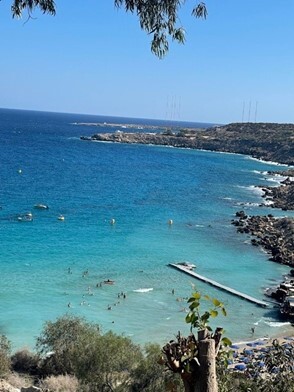 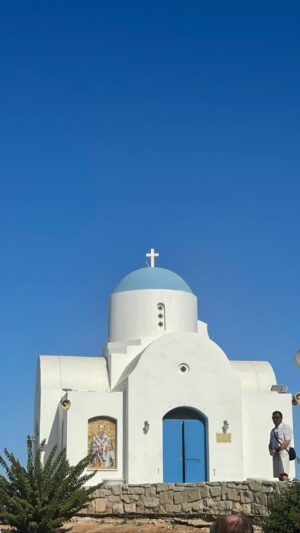 One interesting tidbit I learned at the conference yesterday was that when luxury conglomerate LVMH (MC.PA) went to borrow money in the capital markets to buy U.S. jeweler Tiffany, it was actually able to issue bonds at a negative interest rate. So in some sense, bondholders were paying the LVMH to take a crack at buying and turning around the jewelry chain. Strange financial times we are living in!

I'm going to skip the mailbag today, but it will return next week, when I get back stateside...

Will you buy stocks that you think will go up even when you believe that the company or its management is acting in a way that is reckless or harmful to society? If you watched the whistleblower testimony, did it change your opinion about Facebook? What should the government do – if anything – about the issues raised by the whistleblower? Share your thoughts in an e-mail to [email protected].