1) The election in November will have big implications for investors. As I wrote in yesterday’s e-mail:

It has become increasingly clear to me that we’re going to see a liberal landslide on November 3, with Democrats not only winning the presidency but also both houses of Congress, as they did in 2008 – and for similar reasons: a terrible economy and great uncertainty leading angry, frightened voters to throw out the incumbents.

Nobody wants to say this, however: Democrats, because it could lead to complacency and hurt fundraising and get-out-the-vote efforts… and Republicans, because they so strongly dread this outcome, and also worry that this narrative could become self-fulfilling.

To repeat: this is not a partisan belief. I do not believe this because it’s what I want to happen, but rather based on a dispassionate analysis of: a) our lack of progress in fully defeating the coronavirus (covered in Monday’s e-mail)… b) the enormous economic hole we’re in, which will take years to dig ourselves out of (covered in yesterday’s e-mail)… c) history… and d) current polls.

2) Regarding history, I think two prior elections are illustrative.

First, in the 2018 midterm elections, only 18 months ago, Democrats won control of the House. They gained a net total of 41 seats – their largest gain in 42 years. They also won the popular vote by a margin of 8.6%, which is the largest margin on record for a party that previously held a minority in the House. Lastly, turnout was the highest for a midterm election in more than a century… with more than half of the electorate casting ballots.

Think about what’s happened since then… Most important, we’ve gone from a booming economy to Great Depression-like conditions. And, aside from the economy, I think it’s hard to argue that President Donald Trump has wooed many new supporters – or is likely to before the election.

Thus, it’s not clear to me that this November will look any better – and could be even worse – for the incumbent party than November 2018 was.

The second piece of history I’ll point to is 2008, when we were in midst of the global financial crisis (which wasn’t even close to the catastrophic economic conditions that prevail today). In that election, Barack Obama beat John McCain by 7.2% in the popular vote (52.9% to 45.7%) and won the electoral college by 365 to 173. Not surprisingly, Democrats picked up eight Senate seats to capture the majority with 57, and 21 seats in the House to expand their majority.

This year, I expect very similar results on November 3.

They showed Hillary Clinton winning the last presidential election, for example. And, yes, we’re still nearly six months away… but they’re worth looking at – especially since they’ve been remarkably stable for years, and predicted the liberal landside in the 2018 midterms.

Trump has always been historically unpopular, even when the economy was booming and unemployment was at half-century lows. And, not surprisingly, his popularity has taken a hit amidst this terrible crisis, as you can see in this chart of consensus polls by FiveThirtyEight: 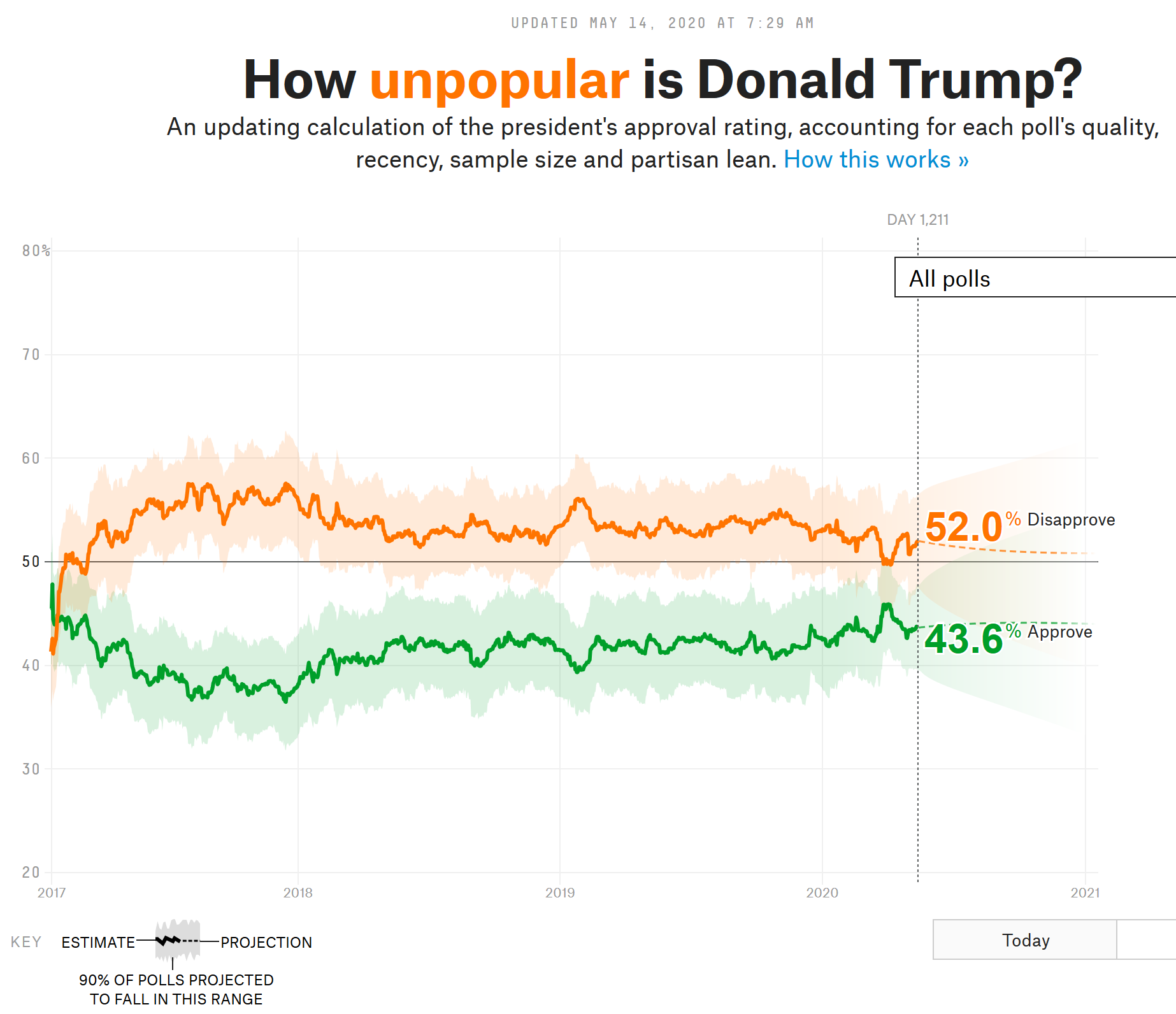 Another polling measure is the generic ballot of which party people plan to support for Congress. This shows an enormous eight-point advantage for Democrats – a remarkably stable advantage since the 2018 midterms: 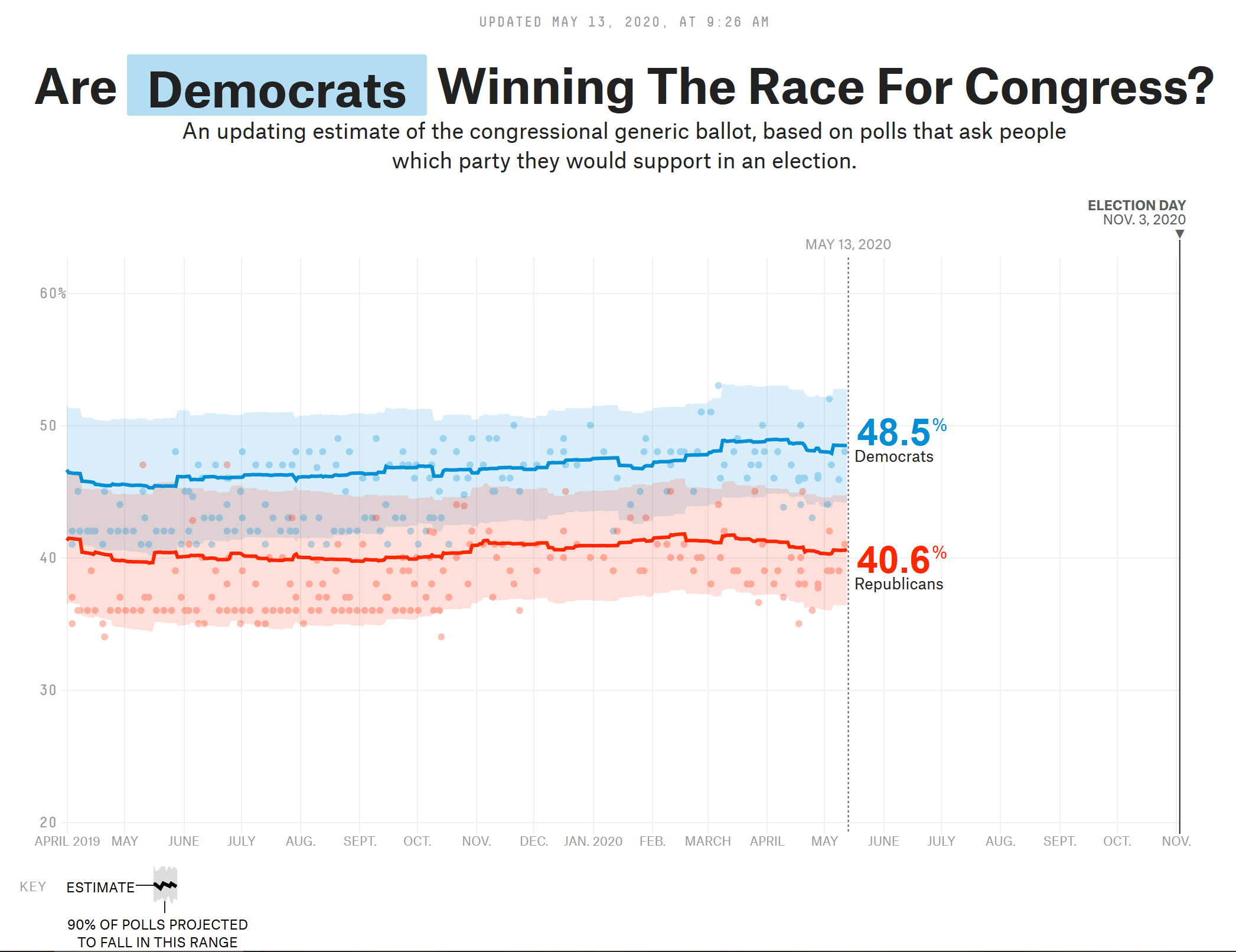 As for the presidential election, we need to look at state-by-state polls, keeping the all-important Electoral College in mind. Here’s the FiveThirtyEight summary of the latest polls in key states: We’ve Got Some Early Trump vs. Biden Swing State Polling… 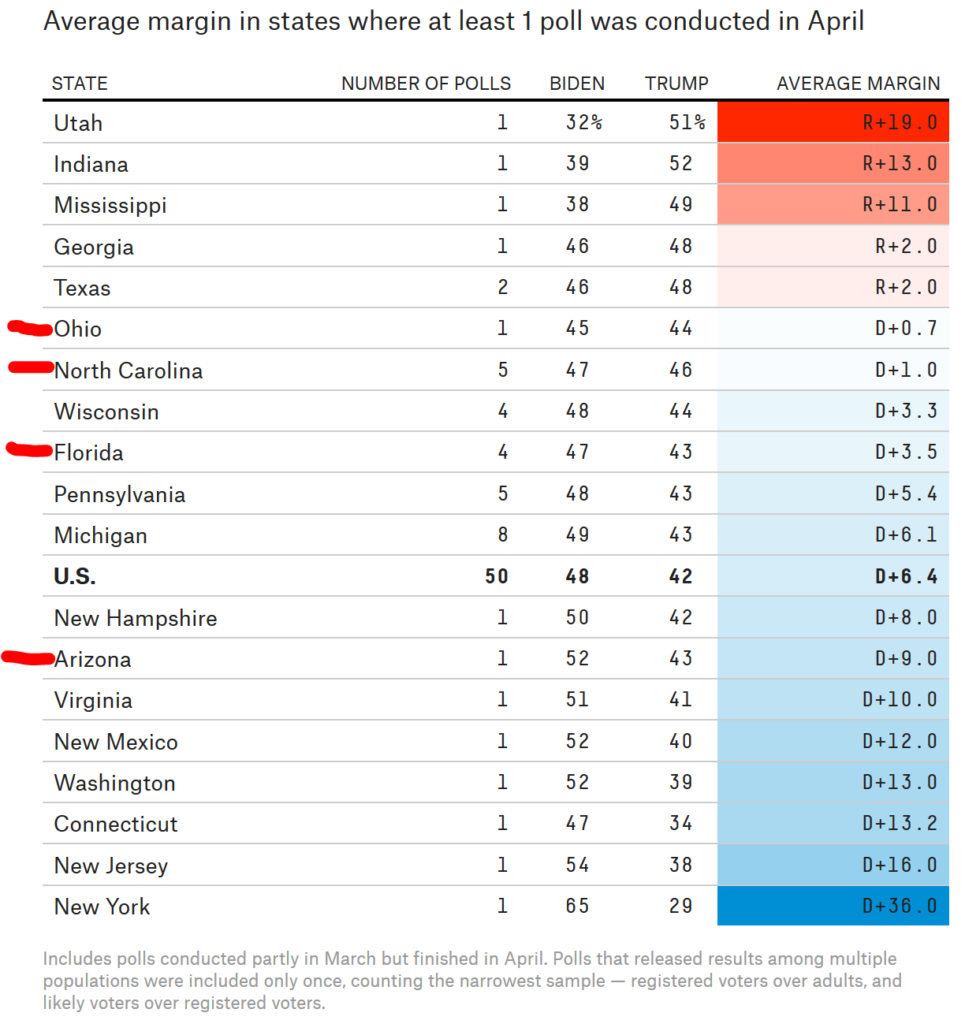 The overall picture here is a grim one for President Trump: he’s trailing badly in the three states that he tipped to win the last election: Pennsylvania, Michigan, and Wisconsin. And, worse yet, he’s trailing in states he absolutely must win to prevail again – like Florida, North Carolina, Ohio, and Arizona – and only has slim leads in solidly red states like Texas and Georgia. (And, keep in mind, these polls were taken before what, by all accounts, was a bad week for President Trump – the one in which he talked about people drinking bleach to fight the coronavirus.)

Here are some related articles:

4) In conclusion, every piece of evidence I can find points to another liberal landslide on November 3.

That’s not to say it’s inevitable, however, because a lot can change between now and then. It is entirely possible – I’m hoping for it, of course! – that everything we’re doing to fight the coronavirus works beautifully and we can quickly go back to normal in the next couple of months. In this case, we could see a strong “V-shaped” economic recovery, and both of these factors could carry President Trump and his party to victory. But I don’t think this scenario is likely…

Please stay tuned over the next six months as I share my thoughts on the ever-shifting probabilities of various election outcomes, as well as some ideas on how to position yourself to take advantage.

In doing so, I’m not expressing an opinion about what I want to happen – merely what I think is likely to happen. So, to those of you in the center or on the right side of the political spectrum, please don’t get angry with me reading what I have to say. I’m simply trying to help my readers make good investment decisions by providing sound, dispassionate insight and analysis.

As always, I welcome my readers’ feedback!