The Type of Investor That Can Change Your Investing Life; Report on Pershing Square Tontine Holdings; The Pied Piper of SPACs; Finance Leaders Reach Global Tax Deal Aimed at Ending Profit Shifting; Millennials Are Running Out of Time to Build Wealth

1) My colleague Enrique Abeyta has been investing in special purpose acquisition companies (“SPACs”) for more than two decades, which is why he’s the perfect person to write our Empire SPAC Investor newsletter (click here to learn more about subscribing).

Sure enough, when I reached out to him, Enrique and his team were already fully engaged and over the weekend cranked out an in-depth, extraordinarily insightful report entitled, “The Type of Investor That Can Change Your Investing Life,” which we released publicly this morning. You can access it here and listen to Enrique’s podcast about it on Apple Podcasts here or Spotify here.

This has been a lengthy analysis and discussion of the value of these securities. Here’s the conclusion for where PSTH could (and should) trade after things settle down… 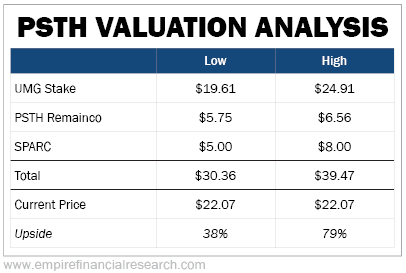 That’s decent upside, but when does it trade there?

Who the hell knows, to be honest, but I have some ideas…

The first thing to consider is that some investors were disappointed on Friday. Clearly, this is not what many were expecting.

A large group of investors were expecting a more straightforward SPAC acquisition of a trophy asset. Payments company Stripe and Elon Musk’s space-based Internet company Starlink and space travel company SpaceX were some of the popular rumors. In other words, many investors expected something that looked more like the DraftKings (DKNG) transaction than this.

Almost nobody was expecting anything like this deal. So not only was it “disappointing” for some investors, but it was also a complicated deal.

To give you an idea, I’ve been a professional investor for 25 years and it took me 10-plus hours of work to wrap my head around this deal, not to mention another 15 hours to write it in a way that most people could understand. This is as complicated as any [John] Malone deal that I’ve seen in the last two decades.

If it takes me that long to fully digest this and this was my life’s work for 25-plus years on Wall Street, what is an average investor supposed to do?

Well, the initial reaction for many of them was to be pissed off and sell the shares. That’s exactly what a lot of them did on Friday.

Almost 11 million shares were traded on Friday, which is 6% of the outstanding shares and almost 10 times the normal daily trading volume.

Based on the “real” float, I suspect it was a much larger percentage. Here’s a table of the top 10 shareholders… 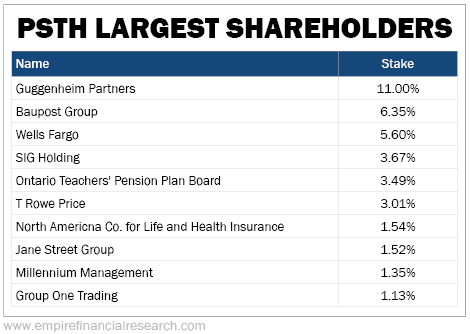 I haven’t spoken with any of these folks, but I’d be shocked if any of the top institutions sold a single share. We at Empire think this is a great deal, and I’d imagine these folks agree.

The top 10 shareholders hold almost 40% of the stock, and Bloomberg shows “institutional” ownership at 54%. Let’s say at least half the shares are tightly held. If so, then about 20% of the shares likely to trade on “disappointment” have probably already traded.

This is an art, not a science, but my experience would lead me to believe that we are somewhere around one-third to two-thirds of the way through this initial “disappointment” sales process.

I think that this will finish up by the end of the week, and I wouldn’t be surprised if it happened sooner.

The good news is this is a lot of volume relative to the shares likely to trade, the stock got hit pretty hard (down 12% on Friday), there’s little incremental downside (with $20 in the bank), and it’s a great deal.

The bad news is that it’s especially complicated, people are mad, and Bill likely can’t comment on much of anything right now. He’s in a difficult position. I suspect that because of European merger and acquisition (“M&A”) activity, PSTH and Vivendi were forced to announce the deal before they could consummate the agreement.

Until the Vivendi shareholder vote on June 22, Bill and Vivendi can’t really say anything. That’s a tough spot to be in when you do a great (albeit complicated) transaction.

Ultimately, Bill has put together an outstanding transaction that is taking advantage of complexity to put PSTH in a position to create tremendous economic value. The downside of that – along with the complication around the regulatory timing – is that it creates near-term uncertainty and downside.

The upside is that this is a tremendous entry point for investors to buy shares of PSTH.

Relative to my initial thesis back in January, only two things have changed: The stock is cheaper, and Bill has announced a great deal and dramatically improved the structure of the SPAC.

If an opportunity is even better and even cheaper, you buy the hell out of it. That’s what I recommend you do right now.

After the Vivendi meeting on June 22, I expect Bill will be able to talk more about the deal. Assuming it gains shareholder approval – which I expect – then he will come out swinging.

PSTH is unlikely to turn into the next GameStop (GME) or AMC Entertainment (AMC). But if you’re looking to make 20% or 30% quickly (back to where it was trading a couple of months ago) and have the chance to make multi-bagger returns over time, then this is a no-brainer investment opportunity.

Buy shares of Pershing Square Tontine Holdings (NYSE: PSTH) right here and you will be rewarded over the long run.

2) Speaking of SPACs, The New Yorker recently did this long profile of Chamath Palihapitiya: The Pied Piper of SPACs. I have to admit I both love and hate him – LOL! Excerpt:

Other Palihapitiya stories go viral because they capture how delectably outrageous he can be. In 2019, when he was trying to persuade investors to support his first SPAC – for the space-tourism company Virgin Galactic – he met in New York with a group of mutual-fund managers and gave a dazzling speech about helping mankind reach for the heavens. It went unmentioned that Virgin Galactic had burned through nearly a billion dollars, and that in its 15-year history it had missed every major deadline that it had set for itself. Instead, Palihapitiya proclaimed that the company would likely earn enormous profits – and change the world.

One listener – an older gentleman, conservatively dressed – began interrupting Palihapitiya to question both his track record and his projections. Palihapitiya let the man spout off for a bit, and then replied, “You’re a complete fucking idiot.”

The older man looked as if someone had just punched him.

“Have you even looked at the prospectus? Did you even fucking Google me before you came in here?”

All the eyes in the room went wide. “How lazy are you?” Palihapitiya said. “I don’t even want your fucking money.”

Silence. Then one of the younger listeners started chuckling. Everyone under the age of fifty began grinning uncontrollably: now they had a Palihapitiya story of their own. “It was brilliant,” an attendee told me. “It was completely calculated. That old guy wasn’t ever gonna invest in space tourism. But the other people in the room – they loved it!”

About half of the investors called Palihapitiya’s office afterward to say that they wanted in on the deal. “People either love Chamath or they hate him, and that’s fantastic, because polarization gets attention,” the attendee said. “Polarization gets you on CNBC, it gets you Twitter followers, it gets you a megaphone. If you believe that Chamath can get an hour on CNBC to explain Virgin Galactic, then you want to buy into this deal, because attention is money.” Having a great story, and knowing how to tell it, can be a quick way to get rich. Which is exactly how capitalism, at certain moments, is supposed to work.

The top economic officials from the world’s advanced economies reached a breakthrough on Saturday in their yearslong efforts to overhaul international tax laws, unveiling a broad agreement that aims to stop large multinational companies from seeking out tax havens and force them to pay more of their income to governments.

Finance leaders from the Group of 7 countries agreed to back a new global minimum tax rate of at least 15% that companies would have to pay regardless of where they locate their headquarters.

The agreement would also impose an additional tax on some of the largest multinational companies, potentially forcing technology giants like Amazon, Facebook, and Google as well as other big global businesses to pay taxes to countries based on where their goods or services are sold, regardless of whether they have a physical presence in that nation.

This reflects a broader trend, as the worldwide average statutory corporate tax rate has consistently decreased since 1980, when the GDP-weighted rate was 46.5%, to today’s level of 25.9%, as you can see in this chart: 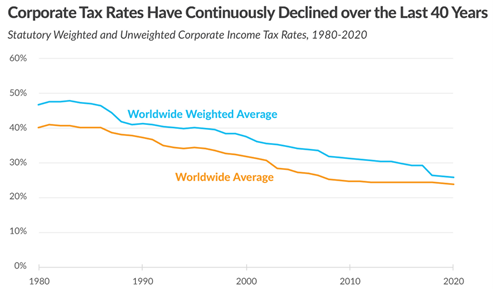 4) Speaking of things that infuriate people, I think this Bloomberg article, Millennials Are Running Out of Time to Build Wealth, captures why many Americans are so angry…

For the first time in our nation’s history, a generation isn’t doing better than the one before it. When tens of millions of people are doing all the right things and working harder than ever, with little to show for it, it feeds both deep rage and despair… Excerpt:

In almost every way measurable, millennials in the U.S. at 40 are doing worse financially than the generations that came before them.

Fewer millennials own homes than their parents did at their age. They have more debt – especially student debt. They simply aren’t as wealthy.

Now, if predictions of a long, post-COVID economic boom are to be believed, this may be the last opportunity an entire generation has to build wealth before heading off into retirement.

5) My wife and I got back last night from our friend’s birthday bash in Las Vegas over the weekend. If you want to see evidence of a booming economy, look no further… Everything was jam-packed: the airports, flights, hotels, restaurants, casinos, etc.

And it sure was nice going somewhere where fully vaccinated folks like us not only didn’t have to wear masks at any time, indoors or out – but didn’t even carry them with us!