The Secret IRS Files: Trove of Never-Before-Seen Records Reveal How the Wealthiest Avoid Income Tax; Buffett comment and tweet; The Untold Story of How Jeff Bezos Beat the Tabloids

1) I have to chuckle at the timing here…

In Monday’s e-mail, I celebrated this news, Finance Leaders Reach Global Tax Deal Aimed at Ending Profit Shifting, and commented that: “It’s been infuriating to see the largest, most profitable global businesses paying little or no taxes.”

Then, in yesterday’s e-mail, I included a chart showing what types of assets make up Americans’ net worth, depending on which wealth tier they’re in.

And then this extraordinary piece of investigative journalism by ProPublica broke yesterday: The Secret IRS Files: Trove of Never-Before-Seen Records Reveal How the Wealthiest Avoid Income Tax. Excerpt:

ProPublica has obtained a vast trove of Internal Revenue Service data on the tax returns of thousands of the nation’s wealthiest people, covering more than 15 years. The data provides an unprecedented look inside the financial lives of America’s titans, including Warren Buffett, Bill Gates, Rupert Murdoch, and Mark Zuckerberg. It shows not just their income and taxes, but also their investments, stock trades, gambling winnings, and even the results of audits.

To some extent, the findings were no surprise at all, as anyone who knows anything about our tax system knows it’s rigged in favor of the uber-wealthy. On the other hand, the details were stunning:

Michael Bloomberg managed to do the same in recent years. Billionaire investor Carl Icahn did it twice. George Soros paid no federal income tax three years in a row…

Taken together, it demolishes the cornerstone myth of the American tax system: that everyone pays their fair share and the richest Americans pay the most. The IRS records show that the wealthiest can – perfectly legally – pay income taxes that are only a tiny fraction of the hundreds of millions, if not billions, their fortunes grow each year.

Many Americans live paycheck to paycheck, amassing little wealth and paying the federal government a percentage of their income that rises if they earn more. In recent years, the median American household earned about $70,000 annually and paid 14% in federal taxes. The highest income tax rate, 37%, kicked in this year, for couples, on earnings above $628,300.

The confidential tax records obtained by ProPublica show that the ultrarich effectively sidestep this system.

To be clear: ProPublica isn’t asserting that any of these billionaires cheated on their taxes. (In fact, many of them have called for higher taxes on the 0.001-percenters like themselves.)

So don’t hate on them.

The problem here is the system.

I try to keep politics out of this e-letter, so I’m not going to opine on what should be done to fix this (though I have plenty of ideas)…

But I don’t think it’s controversial or political to say that when the outcome of a tax system is that a handful of the very richest people pay only a tiny fraction of the tax rate of the average working person, big changes are needed.

In a detailed written response, Buffett defended his practices but did not directly address ProPublica’s true tax rate calculation. “I continue to believe that the tax code should be changed substantially,” he wrote, adding that he thought “huge dynastic wealth is not desirable for our society.”

The decision not to have Berkshire pay dividends has been supported by the vast majority of his shareholders. “I can’t think of any large public company with shareholders so united in their reinvestment beliefs,” he wrote. And he pointed out that Berkshire Hathaway pays significant corporate taxes, accounting for 1.5% of total U.S. corporate taxes in 2019 and 2020.

Buffett reiterated that he has begun giving his enormous fortune away and ultimately plans to donate 99.5% of it to charity. “I believe the money will be of more use to society if disbursed philanthropically than if it is used to slightly reduce an ever-increasing U.S. debt,” he wrote. 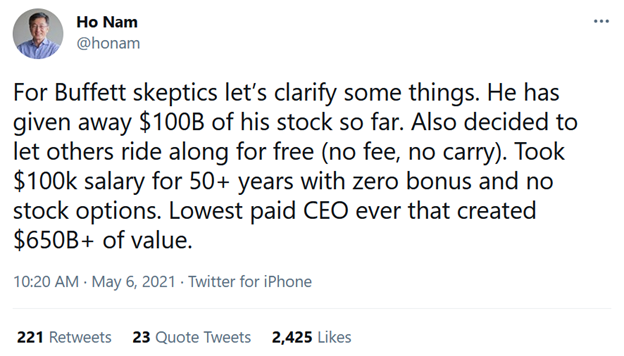 4) And speaking of Amazon (AMZN) CEO Jeff Bezos, who’s also mentioned in the ProPublica story, this Bloomberg Businessweek cover story is a rollicking tale: The Untold Story of How Jeff Bezos Beat the Tabloids. Excerpt:

Bezos viewed the email as blatantly extortive. On Feb. 7 he told his advisers that he knew exactly what he was going to do. He wrote a 1,000-word-plus essay titled “No Thank You, Mr. Pecker” and handed it off to Amazon’s senior vice president of global corporate affairs, Jay Carney, whose brow furrowed in surprise as he read it for the first time while on a videoconference with colleagues. Then Bezos had it uploaded to the publishing site Medium.

The post was stunning. In it, Bezos included the emails from AMI’s [American Media Inc.] attorney and top editor in their humiliating entirety. But, however embarrassing it was to have his sexts described in detail, Bezos knew they were also damning for AMI. “Something unusual happened to me yesterday,” he wrote in the swaggering tone of someone supremely confident in his position. “I was made an offer I couldn’t refuse. Or at least that’s what the top people at the National Enquirer thought. I’m glad they thought that, because it emboldened them to put it all in writing.” He neglected to mention that they had only done so after being pressed by a lawyer working on his behalf. Bezos, it seemed, had manipulated his adversaries into creating an incriminating paper trail.

Bezos then made explicit what de Becker had only implied: He suggested AMI was attacking him on behalf of the Trump administration and the government of Saudi Arabia. His ownership of the Washington Post, Bezos wrote, “is a complexifier for me. It’s unavoidable that certain powerful people who experience Washington Post news coverage will wrongly conclude I am their enemy.” He also added that he didn’t regret owning the paper. It was, he wrote, “something I will be most proud of when I’m 90 and reviewing my life, if I’m lucky enough to live that long.”

This noble sentiment, of course, had little to do with his extramarital relationship, or the scheming of his girlfriend’s brother, or the desperate attempts of AMI to escape a cloud of political suspicion. It was, in other words, a public-relations masterstroke. Bezos cast himself as a sympathetic defender of the press and an opponent of “AMI’s long-earned reputation for weaponizing journalistic privileges, hiding behind important protections, and ignoring the tenets and purpose of true journalism.”

To interested readers, Bezos was taking a brave stand against the devious tactics of Trump’s allies while vulnerably offering his own embarrassing photographs as collateral. “Bezos Exposes Pecker,” declared the New York Post memorably, as public sympathies shifted to his side.