The Scary Reality for Small Businesses

► Thousands of small businesses are quietly shutting down…

While high-profile bankruptcies at big firms like car-rental agency Hertz (HTZ), department store J.C. Penney (JCPNQ), and offshore driller Diamond Offshore Drilling (DOFSQ) continue to be the headline-grabbers, these are swamped in number by the scores of small, independent businesses that are permanently closing their doors each day.

As I said in the June 24 Empire Financial Daily, big business bankruptcies are sure to keep lawyers and courts busy for years… but when your local restaurant, travel agent, or nail salon closes up shop, there are generally no Delaware Court filings made or think pieces written about what we’ve lost to the COVID-19 pandemic and whether the business would have made it if 2020 had gone another way.

Instead, small businesses tend to go out with barely an audible whimper. As is typical, I only learned that the Chinese-Cuban restaurant on my corner that has been there since before I was born had closed when I read on Facebook (FB) that workers were seen carrying away the kitchen equipment. Other quiet closures are outed by the sad presence of a “For Lease” sign. Still other times, you learn a local business has shut when you show up and find that it’s no longer there.

With no shareholders or bondholders, a small business that closes up shop informs its employees, calls the utility company, hands the keys back to the landlord… and that’s about it.

While local websites may report on closings as they happen, most small businesses that go under disappear with barely any public notice. Without formal creditors beyond credit cards, there’s no need to file in bankruptcy court… They just disappear into the night.

But looking at review site Yelp (YELP) data can give us a good idea of the carnage.

By July 10, 55% of the 132,580 business closures tracked by Yelp had become permanent versus temporary. This was a significant rise from June 15, when 41% of 140,000 businesses characterized their closures as permanent. The number of permanently closed businesses had increased by nearly 16,000 in less than a month.

As time has passed, the number of temporary closures becoming permanent has risen… 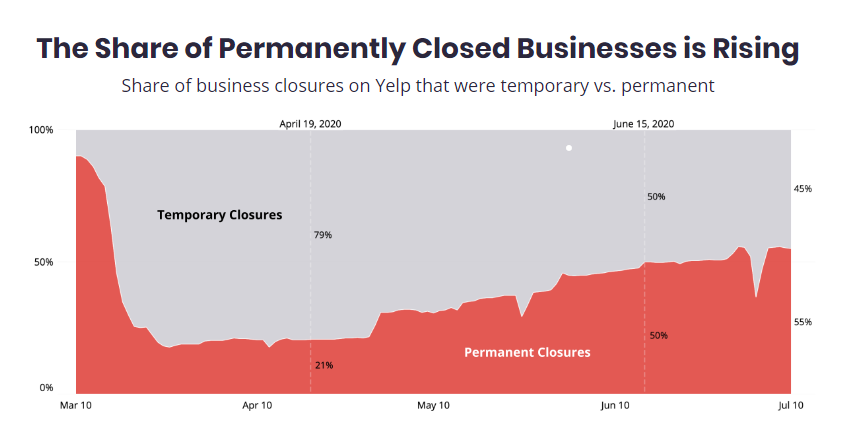 Not surprisingly, the ratio of permanent to temporary closures has been the highest in tourism-dependent cities such as Las Vegas and Honolulu.

Also as expected – which I discussed in the May 20 Empire Financial Daily – the small business devastation has been most acute in the restaurant segment. According to Yelp, by July, 60% of temporary restaurant closures had become permanent. Other segments hard hit by permanent closures include bars and retail. Take a look…

Faring better within the arena of small business are professional firms providing services like legal, accounting, as well as web and graphic design… These are all services that can be delivered entirely or primarily remotely. Health services and counseling businesses are also weathering the storm, as are education and tutoring businesses, which are benefitting from school closures.

Lots of small businesses add up to a big part of the U.S. economy…

Firms with fewer than 500 employees account for about 44% of U.S. economic activity, according to a U.S. Small Business Administration report, and they employ almost half of all American workers.

While small businesses have notoriously high failure rates, the sudden drop in revenues when the pandemic hit has pulled forward a lot of future churn. It has also put businesses that were healthy before in jeopardy, particularly if they operate in segments subject to complete shutdown or rigorous capacity constraints.

All this matters because there can be no full economic recovery without a recovery in employment. And with close to half of Americans working in small businesses, it will be hard for overall employment to rebound without stabilizing the small business sector.

The Paycheck Protection Program (“PPP”) provided hundreds of billions of dollars in loans and grants that helped small businesses make payroll during the height of the lockdowns. While many small businesses failed despite PPP, many of the ones that went quickly in March and April were likely already in trouble before the pandemic struck. But as the PPP money runs out now, businesses that were robust pre-pandemic are falling on hard times. As the New York Times explained recently…

Many businesses that failed in the early weeks of the pandemic were already struggling, had owners nearing retirement or were otherwise likely to shut down in the next couple of years. Those closing down now look different.

The expiration of $600 supplemental unemployment payments remains one headwind to the general economic recovery, and small businesses are no exception.

Specific to small businesses – such as restaurants and fitness providers – looming colder temperatures pose a threat to the scrappy operations that have moved outdoors when prohibited from operating inside at full capacity.

With the deadline to apply for PPP past and most recipients running through their prior receipts, small businesses have looked to the federal government for a second relief package. But Congress has been dragging its feet… And if funds don’t get allocated soon, many of the gains from the PPP will prove temporary – resulting in small business bankruptcies that were delayed rather than avoided.

This could have a devastating impact on employment levels. According to a Goldman Sachs (GS) survey conducted with Babson College in early September, 88% of PPP recipients have already fully spent the funds from their loan, and 32% of all loan recipients have been forced to begin layoffs or cut salaries. Even with careful budgeting, 30% of small businesses surveyed said they will exhaust their cash reserves by the end of this year.

The looming threat of small business failure is one factor contributing to household job insecurity. According to the federal government’s Household Pulse Survey, conducted in late August, one in four respondents expect someone in their household will experience loss of income between now and the end of the year. And as the Washington Post reports…

Slightly less than one-third of respondents said they struggled to pay for their usual household expenses last month, the survey estimates, and about one in 10 said they suffer from food insecurity, meaning someone in their household did not have enough to eat over the past week. Federal survey data also indicates that an estimated 5.4 million Americans may be facing eviction or foreclosure in the next two months, further adding to the pressure on lawmakers to address a looming housing crisis.

With a second federal aid package delayed by political infighting, it’s no surprise only 7% of companies in the Goldman survey felt like the government prioritizes policy favoring small businesses over big firms…

The White House has been pushing for a second relief package, but Congress can’t agree on what should be in it. There’s essentially a wide spread between what the Democrats in the House are proposing and what the Republicans in the Senate are supporting.

House Democrats began with a $3 trillion proposal but have since cut back the cost of the plan to $2.2 trillion. Republicans in the Senate responded with a so-called “skinny” COVID-19 relief bill worth $300 billion, which failed last week. The White House is sitting in between the two Congressional factions, supporting around $1.5 trillion in aid.

The primary items in the House bill passed by Democrats that were absent in the Republican bill are another round of $1,200 stimulus checks (which the White House supports) and money for cities and states, which would help avoid massive layoffs of municipal employees like police, firemen, and teachers. Democrats also oppose a tax credit for private school attendance, which is part of the Republicans’ “skinny” bill.

The GOP proposal featured $300 per week in supplemental federal unemployment benefits through the end of the year (versus $600 in the Democrat bill), funding for testing and vaccines, and protection from legal liability for businesses and health care (this last point was strongly opposed by Senate Democrats).

Democrats contended that the Senate GOP legislation, written without any Democratic input, was designed to fail and intended only to give Republicans cover for inaction. Republicans argued that Democrats were refusing to agree to any new relief because they didn’t want to help President Trump or bolster the fragile economic recovery ahead of the election.

While the powers that be duke it out in D.C., many small businesses are left waiting.

Targeted small business relief bills have been introduced by Republican Sens. Marco Rubio of Florida and Susan Collins of Maine, and a competing bipartisan bill has been introduced by Democratic Sen. Michael Bennet of Colorado and Republican Sen. Todd Young of Indiana. This Goldman Sachs infographic below summarizes the two bills, and their broad support from small businesses surveyed… 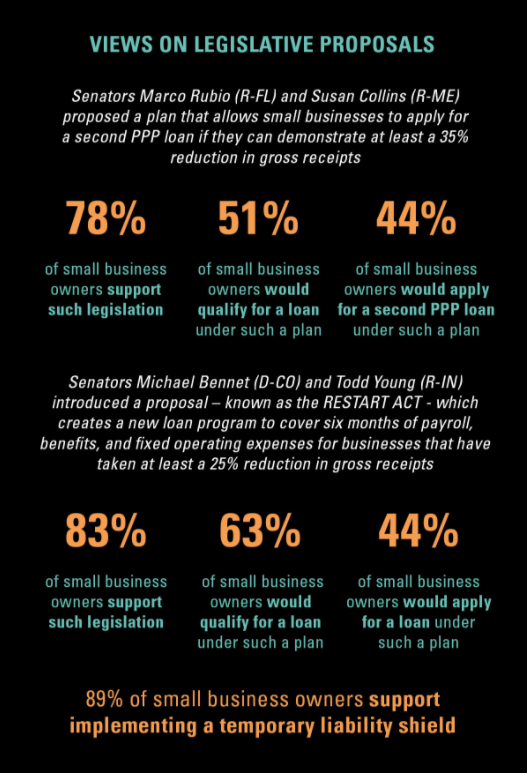 With time running out for many small businesses, the frustrations of one small-town shop owner echo what’s being felt around the country. Peter Pronko of Wellington, Colorado has a message for Congress, which he offered to Colorado Public Radio…

Get your act together. Stop being stupid. I got to admit that I’ve reached the point of being angry with the way things are being handled all the way around.

While the unemployment rate has meaningfully improved from 14.7% in April to 8.4% in the most recent August jobs report, maintaining these gains and improving on them will be contingent on providing effective support to America’s small businesses.

In today’s mailbag, two readers weigh in on what they will pay for – and what they won’t – when it comes to streaming…

What elements of a second COVID-19 relief bill do you think are most important? If you run a small business, what relief proposals would be most beneficial to you? Send me an e-mail at [email protected].

“I actually offered to my family the idea of buying the Disney+ streaming last weekend to watch Mulan.

“1) There is no way we are going into a movie theater any time soon.

“2) my family has run dry of Netflix movies and shows.

“3) Because of the pandemic, I have uncovered extra money because I am not out at stores enticing myself to spend it on unnecessary stuff that I don’t need.

“I was game, because I felt this could be a great option to begin watching new releases from the comforts of my home. I’ve warmed up to this new option due to the pandemic. I think my family is willing, but just need a more appealing film like the Marvel/DC movies, or suspense, action and thrillers are good too.” – Christina W.

“I am mostly hoping the Bond film will be available soon. I would be highly unlikely to subscribe to a pay streaming channel for one movie. I currently pay for only Acorn streaming service from England, Netflix, and Amazon.

“I have become far less tolerant of regular TV commercials. Thank you for asking. I hope the information is helpful.” – Charles L.