1) In a world where more and more investors are taking on more and more risk, this recent column in the New York Times caught my eye: The Risk-Return Trade-Off Is Phony. Excerpt:

Conventional wisdom in investing says there's a trade-off between risk and return. To make a lot of money, you must take the chance of big losses. Play it safe, and you'll most likely have to settle for meager returns.

The investor Mark Spitznagel says that reducing risk actually increases returns, and he has evidence...

"Universa's risk-mitigated portfolios have, over their decade-plus life to date, outperformed the S&P 500 [Index] by over 3% on an annualized, net basis."...

Here's the zinger: "This performance is a direct consequence of having far less risk," Spitznagel writes...

The reason for writing about safe-haven investing is that I think Universa is on to something that the rest of the industry should heed.

The basic idea is simple: Survival is essential. If a portfolio does well on average but by bad luck has a series of big losses, it may never be able to recover. So it's essential to protect against losing a lot of money in any one period. And don't count on the passage of time to rescue it: If a portfolio isn't well insured, the risk of blowing up and losing everything goes up over time, not down.

I found this example fascinating – and counterintuitive:

Consider the difference between 300 people each rolling a six-sided die once and one person rolling the die 300 times in a row. Modern Portfolio Theory implicitly assumes that the outcome would be the same, but it's not, as Spitznagel describes with examples.

Let's say the payoff from rolling a one is minus 50%, the payoff from rolling a six is plus 50%, and the payoff from the other four sides is plus 5 %. The average return for the 300 people who roll once each would be 3.3% – not bad for a moment's work. Things are likely to turn out far worse for the poor person who rolls 300 times. Now those ones with their negative payoffs are like land mines. The compound growth rate here will be around negative 1.5%, and after 300 rolls the starting stake of $1 will most likely be down to a mere penny. A person who played that game and by chance never rolled a one would make a killing, but it's probably not going to be you.

As an investor, you're not the 300 people rolling once each. You're more like the lone person rolling, again and again, repeatedly exposing yourself to the chance of a big loss.

The reason for this is simple: If two people independently roll dice and one wins 50%, and the other loses 50%, then, collectively, they're even. But if one person rolls twice and loses 50% the first time and gains 50% the next time, then the result is a 25% loss.

The lesson here is that, to build a successful long-term track record, it's critical to avoid big losses.

There are two general ways to do so, one obvious and one less so...

The obvious one is security selection: own things like safe bonds, broadly diversified index funds, and blue-chip stocks like Berkshire Hathaway (BRK-B).

But equally important is portfolio management, a topic I've written a great deal about in recent months.

In short, it's OK to own certain risky, speculative things like ethereum (which is up 110% since we recommended it in April in our Empire Stock Investor newsletter – click here for a risk-free trial offer of only $49 for the first year) or stocks like SandRidge Energy (SD), about which I wrote extensively last month. But these risks must be sized small, both individually and collectively, and be balanced in your portfolio with much larger, safer positions.

2) One way to protect against a big loss in your portfolio is to buy puts, a strategy highlighted in the New York Times article above:

Spitznagel's alternative is insurance. In his funds, he shaves off a small portion of the portfolio – 3% or so, depending on circumstances – and puts it into an asset that isn't expected to make any money on average but will go up a lot when everything else goes down. In my interview, he declined to discuss the nature of this insurance but put options would be one natural choice.

This led one of my readers to ask me:

"Hi, Whitney. I saw this interesting piece in the New York Times and was wondering if you might be planning to write about the topic of hedging risk by buying puts. I must admit that it has been on my mind lately, given how absolutely bananas the stock market seems to be in many ways. I don't want to time the market and miss more 'melting up,' but I'd probably be happy to give up a point or two to mitigate the risk of a 20% market crash. I suspect more of your readers may be similarly curious. Just a thought! Congrats on your big race this past weekend, by the way." – Bart E.

I used to buy puts as a hedge against a market crash long ago when I was running a hedge fund but found that it was just an expensive headwind to my portfolio.

If my "spidey sense" is telling me that the market is due for a correction, I just trim my positions a bit and hold more cash.

For what it's worth, my liquid net worth (excluding the value of my apartment) is a bit over 20% cash right now, which is a little on the conservative side, but not super-defensive.

3) This article in today's Wall Street Journal captures one of the reasons why I think the market still has room to run: Wide Selection of Stocks Pushes Market Higher. Excerpt:

A broad base of stocks has driven the market's recent gains, an encouraging sign for investors wondering how long the year's formidable rally can continue.

The S&P 500 has risen 25% in 2021 and last week notched its 66th record close of the year – more new highs than in any year since 1995. Recent gains have come from a diverse array of stocks. Last week saw record closes from dozens of names, ranging from Estée Lauder (EL) and AutoZone (AZO) to Netflix (NFLX) and Home Depot (HD).

The advance isn't limited to shares of the biggest U.S. stocks. The Russell 2000 benchmark of small-cap stocks is up 2% in November, in line with the S&P 500's advance, as investors bet on companies they hope can react quickly to rising inflation.

And a popular technical indicator for market breadth has trended higher. The share of S&P 500 stocks closing above their 50-day moving averages rose early last week to 75%, its highest level since May.

Investors see a broad push higher as a promising sign for the durability of the rally. Relying on the performance of multiple sectors means indexes are less likely to falter if a few big names stall. That has been a concern during times when the megacap tech stocks that hold sway over the S&P 500 pushed the index higher while a diverse set of smaller companies tried to keep up. 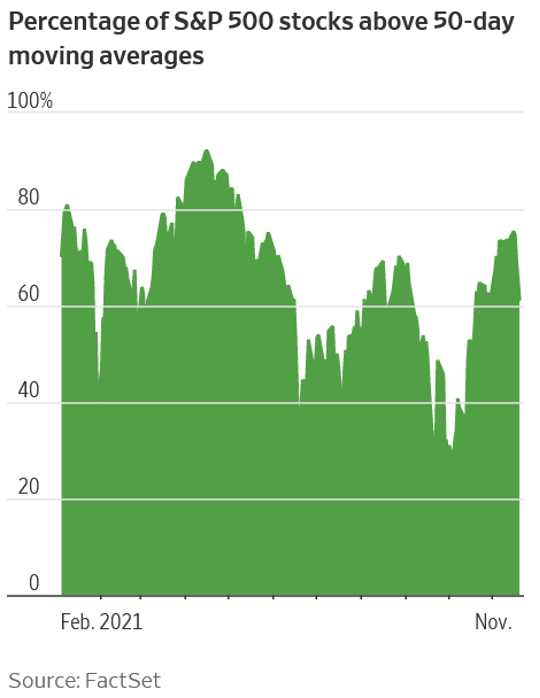 4) This is also good to see (from the front page of today's WSJ): Supply-Chain Problems Show Signs of Easing. Excerpt:

Global supply-chain woes are beginning to recede, but shipping, manufacturing and retail executives say that they don't expect a return to more-normal operations until next year and that cargo will continue to be delayed if COVID-19 outbreaks disrupt key distribution hubs.

In Asia, COVID-19-related factory closures, energy shortages, and port-capacity limits have eased in recent weeks. In the U.S., major retailers say they have imported most of what they need for the holidays. Ocean freight rates have retreated from record levels.

5) A final reason I remain bullish is anecdotal. I've been traveling and going out quite a bit in the past week, and it's crazy out there!

It started a week ago when I flew from Las Vegas to New York City after competing in the World's Toughest Mudder. After my buddies and I finished second in the four-person team division, I wanted to attend the post-race brunch on Monday, where we received our medals. But that meant I had to miss my noon flight and go standby on the redeye home that night.

I took the gamble because I figured there would be plenty of open seats on a weekday redeye flight in the middle of November. Wrong! When I got to the gate, the flight was sold out, and there were 17 people on the standby list.

Fortunately, I have Gold Medallion status on Delta Air Lines (DAL), so I was at the top of the list and made the flight. But only one other person on the list made it – the other 15 folks were stuck because every other redeye flight to New York was sold out as well.

Then, my colleague Berna Barshay and I took our analyst Alex Griese out to dinner at the STK Steakhouse in Midtown Manhattan on Thursday night. We picked it because it's owned by The ONE Group Hospitality (STKS), which is one of Berna's picks in her Empire Market Insider newsletter.

It was an absolute madhouse – you could barely move inside the restaurant. The waiter told us they would do 1,600 covers that night, which is close to $200,000 in revenue – enormous productivity for a restaurant! Here's a picture of us seated outside where it wasn't as crowded: 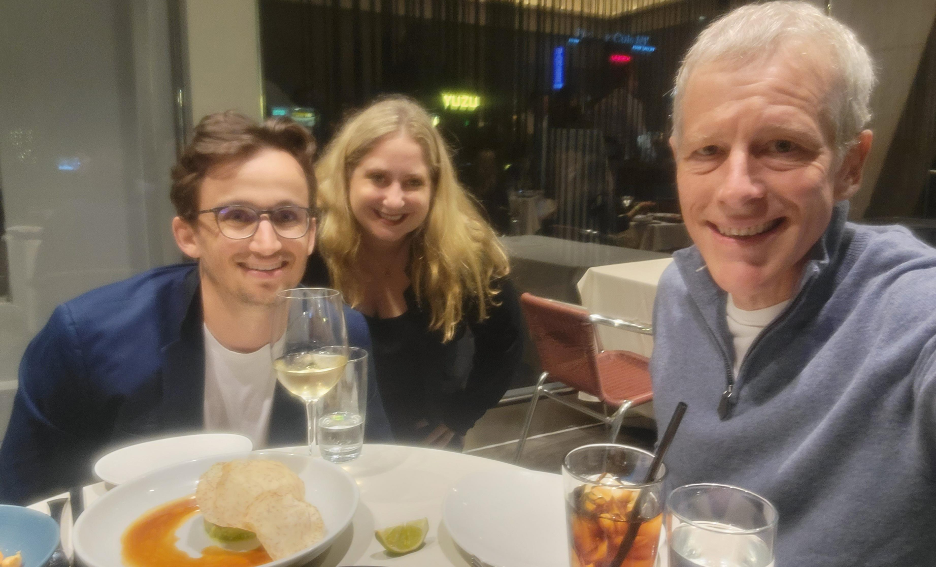 After dinner, I met my wife, and we saw the Broadway show Six. It was great fun, and the theater was packed.

If what I'm experiencing is at all indicative of what's happening around the country – and I think it is – it bodes well for the economy and stocks...

Every month in Empire Market Insider, Berna will share her best stock idea for making money in the market.