The most unusual job market in modern American history, explained; Excerpt from The Art of Playing Defense on exercise

1) Here's a fascinating, in-depth Washington Post article – with plenty of charts – that explores one of the great challenges and mysteries facing our economy: the shortage of workers. The most unusual job market in modern American history, explained. Excerpt:

It can be difficult now to remember what the U.S. economy looked like a year ago. The unemployment rate was 6.7%, with 10 million fewer people employed than before the pandemic. Expectations were that it could take years for the labor market to heal.

Then, the economy experienced two historic surprises. First, demand for workers came soaring back at a velocity almost never before seen. And second, despite companies going all out to hire, millions of workers either retired early or stayed on the sidelines.

These two forces collided to create the most unusual job market in living memory – and an economy afflicted not by too few jobs, but too few workers. 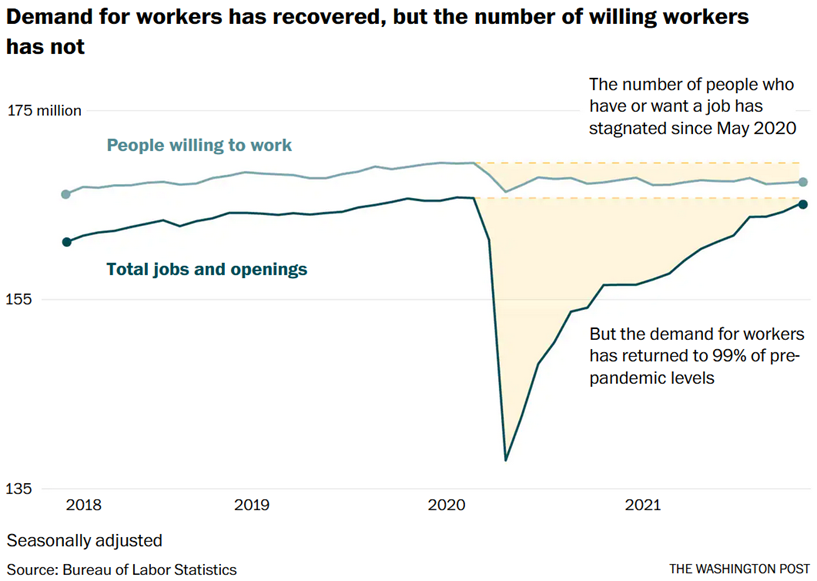 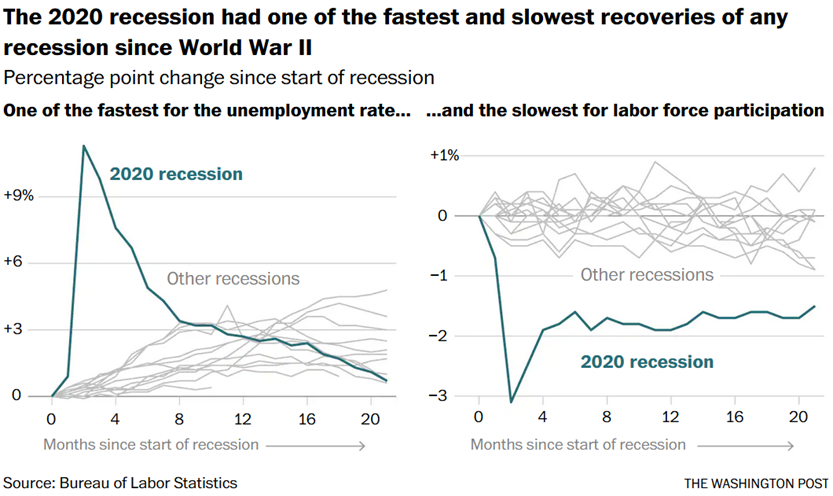 Retirements have been the single largest factor, as these two charts show: 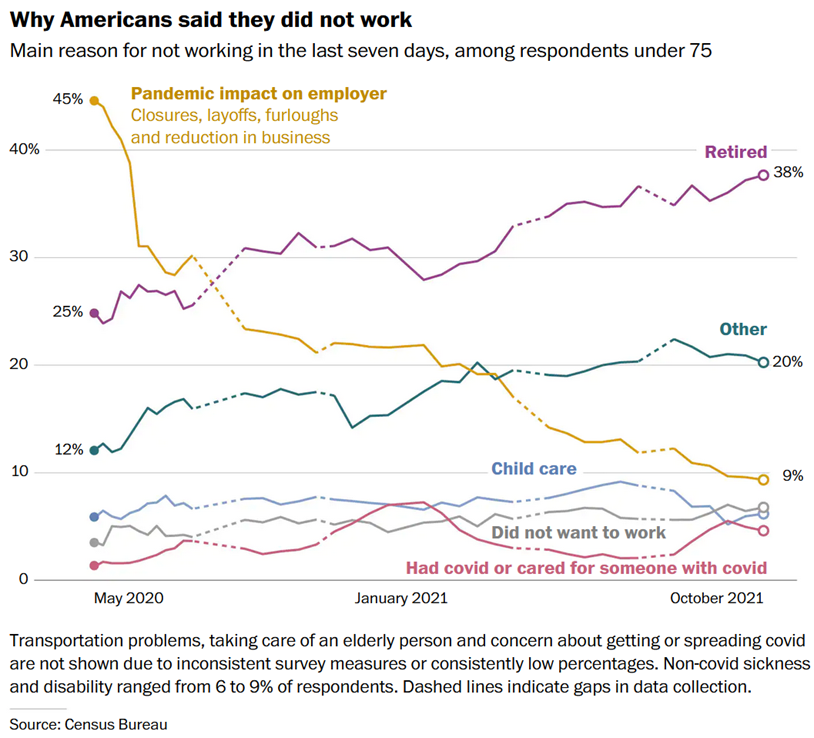 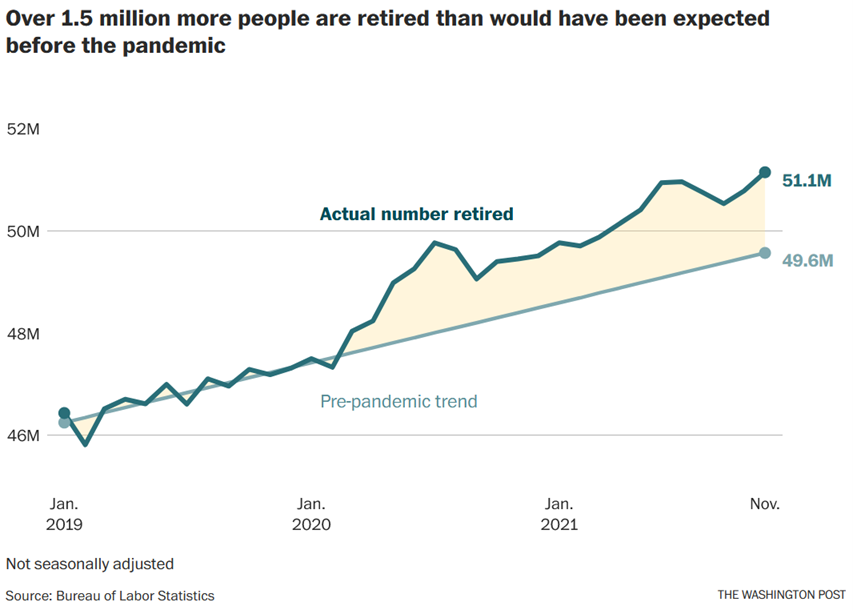 This chart shows that the vast majority of missing workers are aged 55 to 74: 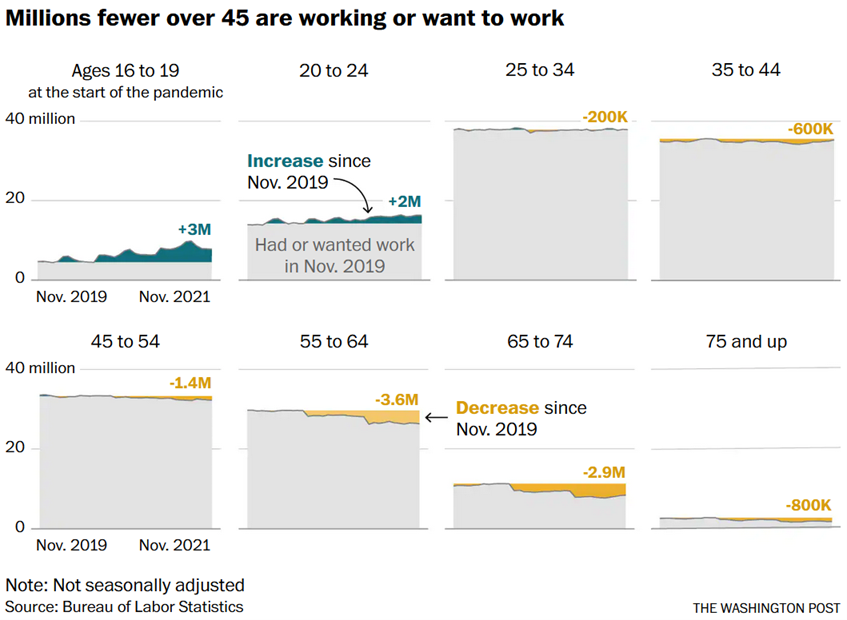 Neither birth rate nor immigration are picking up the slack – in fact, these trends bode poorly for the long run: 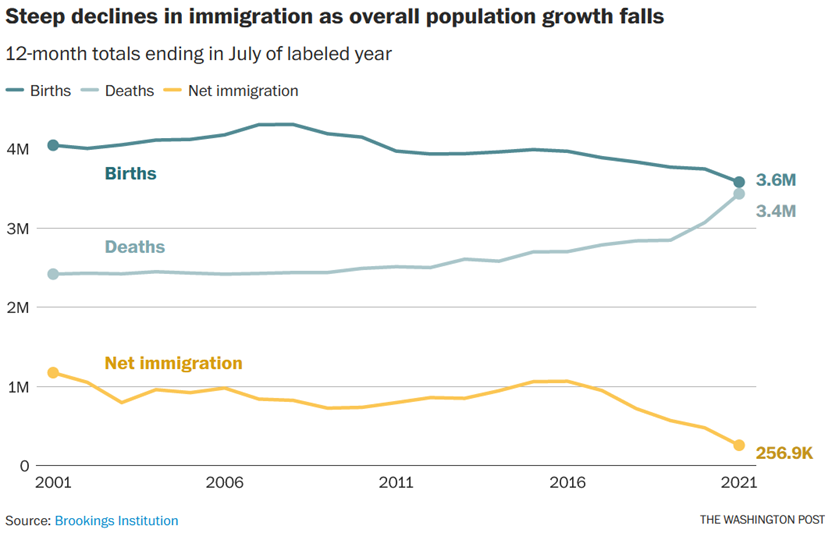 One way to entice more people into the workforce is to raise wages, which is exactly what's happening, especially among low-income workers: 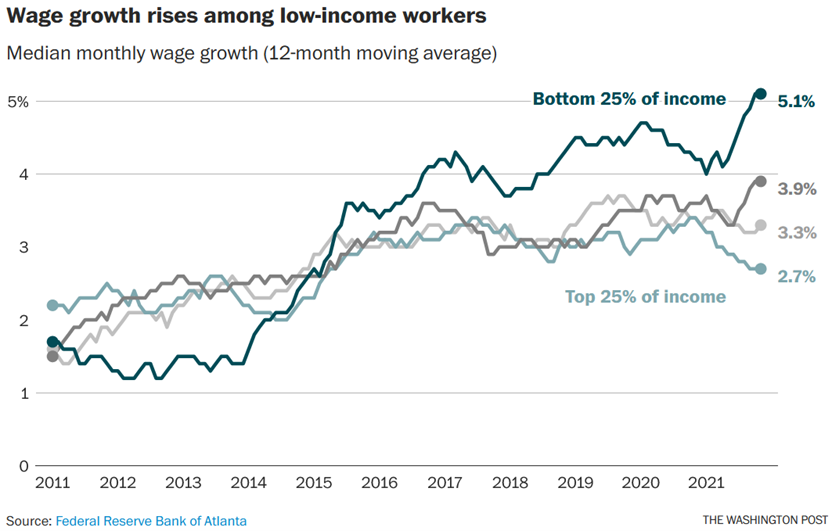 2) As promised in yesterday's e-mail, here's an excerpt from my book, The Art of Playing Defense, on exercise...

Countless studies show that regular exercise leads to better health and fitness, a lower risk of many diseases, and a longer life expectancy. It literally reshapes aging. In various recent studies, active older people's muscles, immune systems, blood cells, and even skin appeared biologically younger, at a molecular level, than those of sedentary people.

Exercise also leads to more energy and self-confidence, lower stress, better sleep, and more happiness. Physically active people are half as likely to be depressed.

But wait, there's more: studies show that exercise increases your memory, learning, creativity, productivity, and self-control. Many people who begin to exercise stop using their credit cards so often. They procrastinate less at work. They do the dishes earlier in the day.

An article in the New York Times summarizes:

Scientists have found and reaffirmed the extent to which movement, of almost any kind and amount, may remake how we think and feel. In one study after another, physical activity beneficially remodeled the brains of children and the middle-aged; lowered people's risks for dementia or, if dementia had already begun, slowed memory loss; and increased brain volume, tissue health, and the quality of connections between neurons and different portions of the brain.

Exercise also seems able to buoy moods far more than most of us, including scientists, might have expected 10 years ago. In observational studies, physically active people proved to be much less likely to develop depression or anxiety than sedentary people, no matter what types of activities they chose.

So get into the habit of regular exercise by finding something you enjoy. I like to mix it up: pickup basketball one day, going to the gym the next, then tennis the next, maybe a good run or race on the weekend. Plus, I ride my bike around the city pretty much every day. At least twice a week, I try to mix in high-intensity interval training, which studies show is important – usually via a session with a personal trainer or running coach or a boutique fitness class like Tone House.

Susan, in contrast, is a creature of habit: she gets up early every morning and does the exact same workout on an elliptical machine in the gym in the basement of our building.

Figure out what works for you – but make it a habit! If I go more than a day without a good workout, I really notice it. I know we're all super busy, but even if you're short on time, you'd be amazed at how much of a sweat you can work up in only a few minutes – for example, I sometimes use the 7 Minute Workout app.

Dr. Yoni Freedhoff, an Associate Professor of Family Medicine at the University of Ottawa, shared this advice in an op-ed published in The New York Times:

After practicing family medicine for 16 years, with a focus on nutrition and obesity, I've learned that the keys to good health are quite simple to describe. In fact, I believe the best health advice can be boiled down to 48 words:

Replace saturated fats with unsaturated if you can.

Drink alcohol at most moderately.

Exercise as often as you can enjoy.

Drink only the calories you love.