The Most Jaw-Dropping and Well-Deserved of Corporate Takedowns; Facebook Knows Instagram Is Toxic for Teen Girls; Pandemic update

1) I'm biased, of course, but I think my colleague Berna Barshay's free Empire Financial Daily is a must-read. She and I write our daily missives completely independently and quite differently. While we have similar approaches to investing, I tend to touch on various topics, while she does a deep dive into only one each day.

Yesterday's Empire Financial Daily on teen girl clothing retailer Brandy Melville, The Most Jaw-Dropping and Well-Deserved of Corporate Takedowns, caught my eye because one of my daughters used to be a big fan. But after reading Berna's e-mail, I don't think any of my daughters will ever shop there again... Excerpt:

Business Insider published an explosive exposé last week, based on interviews with more than 30 current and former employees in eight cities, and it became clear that the executives at the company have been incredibly intentional in promoting a vision of beauty that excludes anyone who isn't white, blonde, and extremely thin. According to a former employee, this directive comes straight from CEO Marsan. The employee also offered an origin story for the "one size fits most" strategy...

There was a day when Stephan told us, 'Take everything but the three smallest sizes off the floor' ... From that moment on, we did not carry anything above a size 4.

This backstory would strike most women as quite offensive, but it is only the tip of the iceberg of what Business Insider uncovered...

The article chronicles a culture of misogyny and exploitation of young girls that is enough to make your stomach turn...

And if that weren't enough, there is a healthy dose of racism as well...

Five current and former New York employees said that Black employees would be routinely fired when white workers became available. One commented, "Even if they were the best employees ever, they would only keep the ones that were pretty or mixed [race]."

And it gets even worse...

There is also at least one allegation of rape made by a former employee against an executive.

2) Speaking of companies doing damage to young women, this article published yesterday in The Wall Street Journal is another must-read. I'm not surprised by the general direction of the findings, but I am shocked at the magnitude of the problem!

Kudos to the WSJ for a piece of reporting that is likely to force Facebook (FB), which owns Instagram, to make long-overdue changes: Facebook Knows Instagram Is Toxic for Teen Girls, Company Documents Show. Excerpt:

"Thirty-two percent of teen girls said that when they felt bad about their bodies, Instagram made them feel worse," the researchers said in a March 2020 slide presentation posted to Facebook's internal message board, reviewed by The Wall Street Journal. "Comparisons on Instagram can change how young women view and describe themselves."

For the past three years, Facebook has been conducting studies into how its photo-sharing app affects its millions of young users. Repeatedly, the company's researchers found that Instagram is harmful for a sizable percentage of them, most notably teenage girls.

"We make body image issues worse for one in three teen girls," said one slide from 2019, summarizing research about teen girls who experience the issues.

"Teens blame Instagram for increases in the rate of anxiety and depression," said another slide. "This reaction was unprompted and consistent across all groups."

Among teens who reported suicidal thoughts, 13% of British users and 6% of American users traced the desire to kill themselves to Instagram, one presentation showed.

Expanding its base of young users is vital to the company's more than $100 billion in annual revenue, and it doesn't want to jeopardize their engagement with the platform.

More than 40% of Instagram's users are 22 years old and younger, and about 22 million teens log onto Instagram in the U.S. each day, compared with five million teens logging onto Facebook, where young users have been shrinking for a decade, the materials show.

They came to the conclusion that some of the problems were specific to Instagram, and not social media more broadly. That is especially true concerning so-called social comparison, which is when people assess their own value in relation to the attractiveness, wealth and success of others.

"Social comparison is worse on Instagram," states Facebook's deep dive into teen girl body-image issues in 2020, noting that TikTok, a short-video app, is grounded in performance, while users on Snapchat, a rival photo and video-sharing app, are sheltered by jokey filters that "keep the focus on the face." In contrast, Instagram focuses heavily on the body and lifestyle.

The features that Instagram identifies as most harmful to teens appear to be at the platform's core.

The tendency to share only the best moments, a pressure to look perfect and an addictive product can send teens spiraling toward eating disorders, an unhealthy sense of their own bodies and depression, March 2020 internal research states. It warns that the Explore page, which serves users photos and videos curated by an algorithm, can send users deep into content that can be harmful.

"Aspects of Instagram exacerbate each other to create a perfect storm," the research states.

The research has been reviewed by top Facebook executives, and was cited in a 2020 presentation given to Mr. Zuckerberg, according to the documents...

"Facebook's answers were so evasive – failing to even respond to all our questions –that they really raise questions about what Facebook might be hiding," Sen. Blumenthal said in an email. "Facebook seems to be taking a page from the textbook of Big Tobacco – targeting teens with potentially dangerous products while masking the science in public."

PS – I touched on this topic in my recent book, The Art of Playing Defense:

If you are a parent of a teenager or young adult, you need to think especially hard about this risk, as suicide is the third and second most common cause of death for Americans between the ages of 1-14 and 15-34, respectively.

Experts aren't sure why, but I think NYU Marketing Professor Scott Galloway nails it when he writes:

"There are many factors, but ground zero is the nuclear weapons [smartphones with Facebook and other social media] we've put in girls' hands to objectify them, perpetually undercut their self-esteem, and enable them to bully each other relationally, 24/7."

3) I continue to closely follow the pandemic and send periodic updates to my coronavirus e-mail list (which you can sign up for by sending a blank e-mail to: [email protected]). Here's an excerpt from yesterday's e-mail (you can read the entire e-mail here)...

1) As I predicted in my August 27 e-mail, it looks like cases are flattening and hospitalizations are following, which means that deaths will soon do so as well (source): 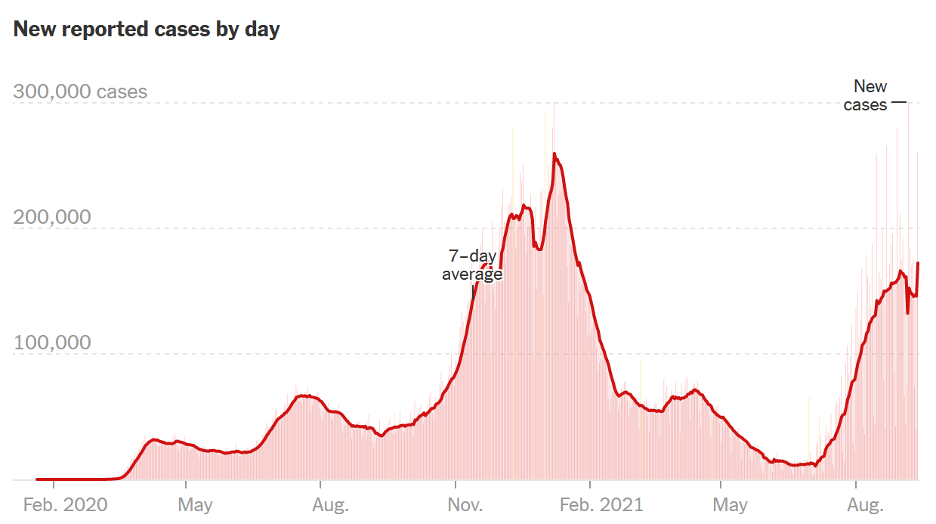 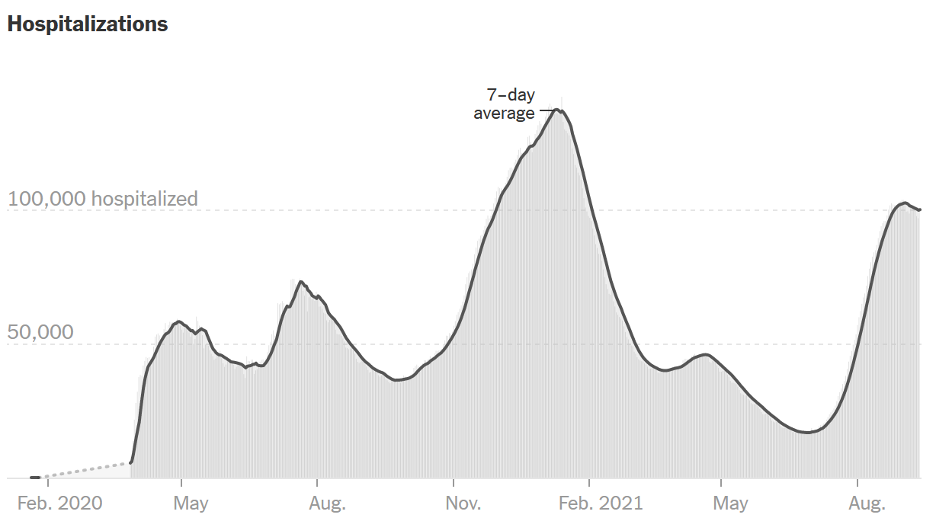 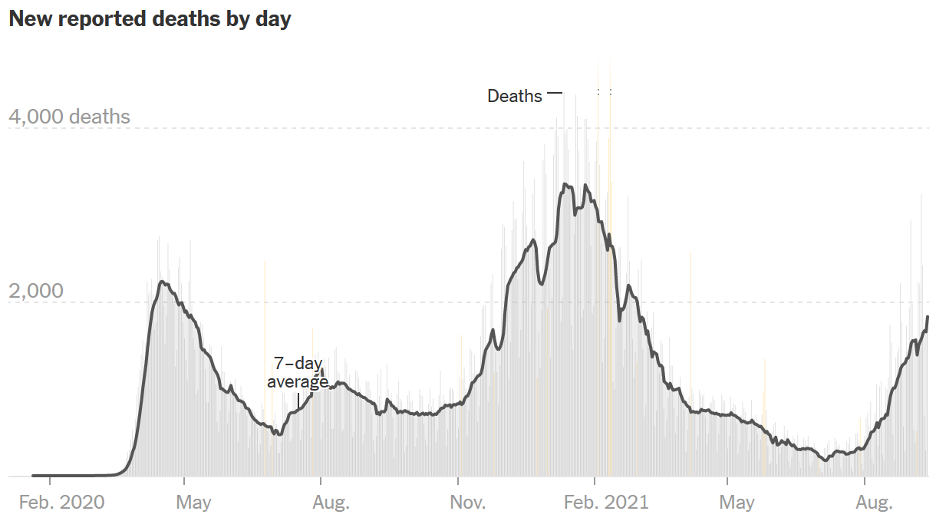 2) We should take no solace in the good news about the flattening of the fourth wave, as a) we're FAR from out of the woods; and b) it was largely unnecessary.

Speaking of which, here's an analysis showing that an estimated 16,200 Americans would be alive right now if their state had the same vax rate as the No. 1 state (Vermont for most of the period studied): The Lives Lost to Undervaccination, in Charts. 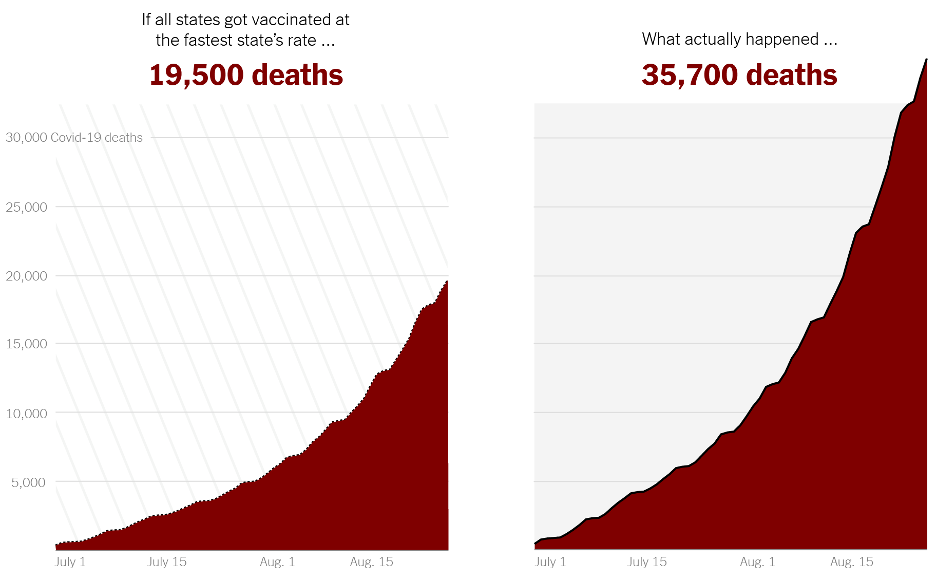 This puts blood on the hands of those who've cynically spread mis/disinformation and politicized the miraculous Trump vaccines.

A study by the Indiana Department of Health found similar results: 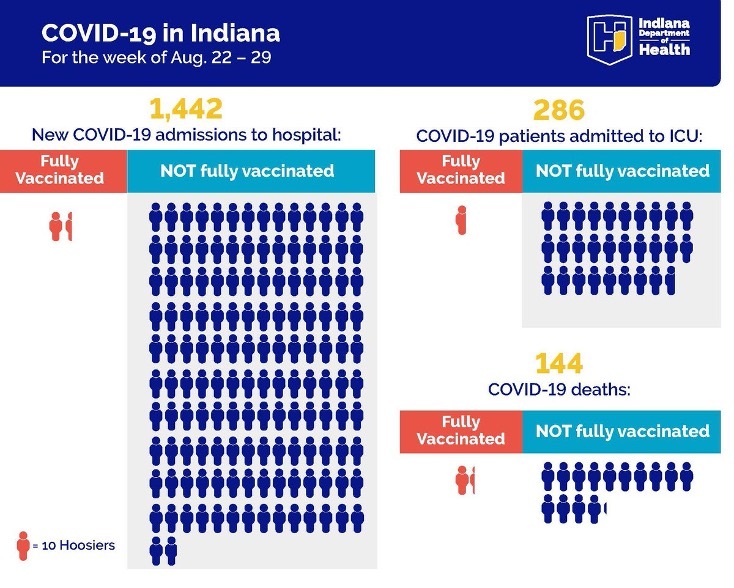 4) This video should be required watching for anyone who is not vaccinated: COVID-19 through the eyes of an unvaccinated patient.

"Whitney, I seldom send emails to anyone outside of my business or social contacts. But I feel that I need to contact you to say thanks.

"You and I are probably on the opposite ends of the political spectrum though I consider myself a moderate conservative. My wife and I struggled for several months about the vaccination thing, which is funny because I worked overseas for many years and received just about every vaccination available in the world to work there.

"We finally started the Moderna (MRNA) vaccines last week. Some of the credit goes to you. Your observation about President Trump pushing this along so that it was available in record time made me stop and reflect on whether I was letting my political views get in the way of my health. I still have concerns about the direction for the country and the economy, but I'm confident it will work out.

"I really enjoy reading your articles each day. You and I actually share many values the same about work and family. I thank you again for always making me stop and think." – Richard B.

Again, to read the rest of the e-mail, click here.