Editor’s note: Today, we’re interrupting our normal publishing schedule to share an important update about the stock market “Melt Up” from Dr. Steve Sjuggerud at our sister company, Stansberry Research. Read on for the details…

The ‘Melt Up’ Is Here… Don’t Miss Out

► I (Steve Sjuggerud) am starting to feel like a broken record…

I’ve been talking about the “Melt Up” for years. I first gave a speech on the topic at the annual Stansberry Conference and Alliance Meeting way back in 2015.

It hadn’t yet started back then, of course… But I saw the underlying pieces moving into place.

In my mind, an eventual Melt Up was a certainty. And I’ve done everything possible to tell the world about it since then…

There have been plenty of starts and stops of Melt Up behavior in recent years. And for the most part, stocks were on a one-way cruise higher as we headed into 2020.

It even looked like the final swing of the Melt Up was upon us at the start of the year. But then, COVID-19 crashed the party…

Make no mistake, that bust was painful and record-breaking. However, the recovery since then has been just as impressive…

For one, it has brought retail investors into the market in a major way. That’s the surest sign we have that the Melt Up is back… and that the clock is ticking on these good times.

It’s not just retail investors, though…

The pros are starting to get more bullish, too, as I’ll share today. And retail enthusiasm, combined with the clout of Wall Street, is what will send the market into a true Melt Up.

There’s another piece to cover before we get to all those details, though. It’s a question you might be asking right now, as I blabber on about how good things are today.

► How can the Melt Up be here if we just saw a correction in stocks last month?

After all, the Nasdaq Composite Index fell 10% in just three days in September.

You might wonder how I could call this a Melt Up with that kind of rapid market sell-off taking place so recently. But that type of thinking is backward…

Major volatility is a hallmark of a stock market Melt Up. And here’s the thing… The recent correction is likely only one of many that we’ll see in the coming months.

That’s the era of the original Melt Up. And things heated up even more in the final inning… The Nasdaq jumped 109% in the last 12 months of that boom.

This shows us the kind of move that’s possible today, now that the Melt Up is back on. It could mean life-changing gains in a matter of months.

But while big gains are likely, I want to be very clear about what you should expect investing in today’s environment…

You see, investing during a Melt Up takes a ton of guts. It’s often a bumpier road than the headline gains imply.

For example, the late-1990s Melt Up wasn’t a one-way trip higher. Instead, it’s proof that 10% corrections are common during Melt Ups.

We saw five pullbacks of roughly 10% in the Nasdaq during the final 18 months of that boom. The largest one led to a 13% decline before bouncing back. Take a look… 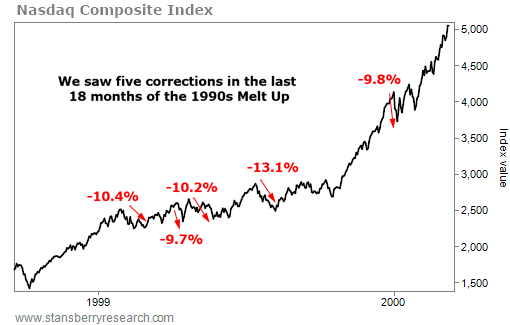 Thanks to hindsight, we know these corrections were just that… short-term falls before the next leg higher. So it’s easy to brush them off as irrelevant today.

But I can assure you… It didn’t feel like that in real time.

In the thick of corrections like that, doubt can start to set in… You can begin to question if the current correction is actually the next major bear market.

Maybe you had those thoughts in September as the Nasdaq sold off. It’s totally normal, especially after the incredible bust we experienced at the start of the year. But you’ve got to be OK with that kind of thing to really benefit from what’s going on today.

We just saw a correction in stocks… And I expect we’ll see more in the months ahead. But this is the reality of a Melt Up… It isn’t all smooth sailing for investors.

There is triple-digit upside potential as the mania unfolds… But it doesn’t come without increased volatility.

Knowing that corrections are common will help you navigate the Melt Up. You’ll know ’em when you see ’em… And you’ll be less likely to jump ship during a correction and miss out on big gains.

As I noted, retail buyers are flooding into the market… But I also want to cover what’s going on with the investment pros. That’s because we need both groups piling into stocks for a Melt Up to truly kick into gear.

To see it in action, we just need to look at last month’s Bank of America Merrill Lynch Global Fund Managers Survey.

This monthly survey is required reading in our office. That’s because it aggregates the thoughts of nearly 300 fund managers with a total of $782 billion in assets under management.

That’s a lot of investment pros. And by looking at their overall thoughts, we get fantastic insights into the overall sentiment in the market.

The September report was eye-opening for a few reasons…

First, a majority of these folks believe we’re out of a recession now. That’s the first time since February that a current recession isn’t the consensus view.

More important, 58% of folks believe we’re in a new bull market. That’s up from 46% in the previous month. And those who think this is a bear market rally continue to fall.

This change in sentiment is crucial for the Melt Up. We need retail investors to be excited, of course. And they are… but these folks don’t move around the big money.

The investment pros carry the big cannons. So without them, it’s tough for a real market mania to happen. As you can see, though, they’re beginning to come around.

We’ve already seen that play out in the retail space. The average Joe wanted nothing to do with stocks in March or April. But as the gains began to pile up… and guys like Dave Portnoy began to get notoriety… things changed fast.

The same will be true with the investment pros. They’ll be more cautious coming around. But they will… Their jobs depend on it.

Investment managers can’t afford to underperform. Sitting on the sidelines and missing out on a major rally is how these guys get fired.

So, like it or not, they’re getting back into the market. And as the gains continue to pile up, they’ll get more and more greedy.

This setup tells me that the Melt Up is here.

► And beyond that, I’m more confident than ever that the Melt Up could be over in the next 12 months or so…

That’s the difference between today and what I’ve been talking about since 2015.

I’ve felt like – and probably sounded like – a broken record in recent years. It has been Melt Up this… and Melt Up that. But please…

Don’t ignore this critical message because of Melt Up fatigue.

This is it, my friends. This is the final push. I’m sure of it. And if you sit on your hands and miss out, you likely won’t get another chance for a long time.

That’s why I just put out a report detailing nine investments that I believe will generate the biggest possible returns in the next 12 months. Learn how to access it here.

Do you think the market is about to Melt Up (or melt down)? How are you positioning your portfolio? Send your thoughts in an e-mail to [email protected].