The Massive Growth in Digital Assets Is Just Getting Started

► The investment world offers many different types of assets...

Of course, stocks, bonds, and options are the most popular... And then there are alternative investments – a wide selection of all "other" asset types.

Within the universe of alternative investments, some of the most exotic are collectibles... and in particular, trading cards.

Chances are good that you grew up collecting sports trading cards.

For many of us in a certain age group, it was a major part of our upbringing. Furthermore, for those of us who were sports fans, mathematically inclined, and interested in money – it was an incredibly engaging "hobby."

It gave collectors a connection to their teams and a sense of accomplishment after completing a "set."

► The original 'trade cards' originated in the 19th century...

These were actually advertising cards that were included in cigarette packs for the purpose of stiffening the packaging.

In the 1860s, not long after baseball became a professional sport, baseball cards began to be printed for the first time and were usually sold in packets of candy or tobacco products.

Companies would insert these cards into product packaging as a prize. The images on the cards were often not related to the product, but were humorous or beautiful, depending on the perceived tastes of the consumer.

Valued for their vivid, full-color imagery, folks began to collect these cards – storing their collections in scrapbooks and albums. Soon they began to trade with each other to obtain a complete set, hence the origin of their name.

These cards faded in popularity as color printing became more common, but the concept of collecting trading cards was born.

The company launched its Bazooka gum in 1950. As an incentive to get folks to buy the product, the company soon decided to package the gum with a small comic on the wrapper. You'll likely recognize the iconic "Bazooka Joe and His Gang"... 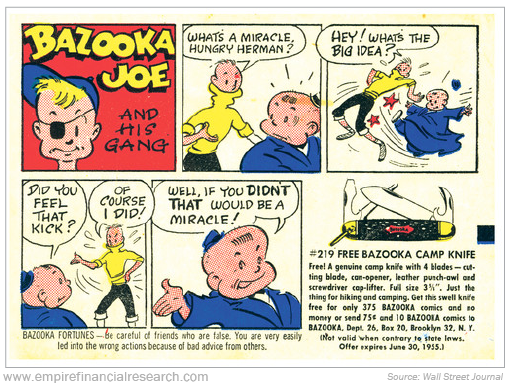 But everything changed for the company after 28-year-old World War II veteran Sy Berger came up with a new type of trading card based on America's pastime – baseball.

The design that Berger created on his kitchen table in Brooklyn would eventually become the 1952 Topps baseball card set.

► It's fascinating to think that the most American of things – baseball cards – actually began as a promotion for cigarettes and candy...

You might remember that a pack of Topps trading cards came with a piece of mostly unchewable gum. I remember buying unopened packs in the late 1980s from a decade earlier and having contests with my friends for who could actually chew the old gum!

The most engaging part of collecting, though, was the opportunity to find economic value.

Simply opening a pack of cards gave you the chance to get your hands on a card that could be worth 5 times, 10 times, or even 100 times what you paid for the pack. It was sort of like playing the lottery, except it was legal for a 14-year-old.

Beyond the opportunity for quick gains, it was also a hobby that benefited from an "investment" and "portfolio" approach.

Collectors could try to identify cards that they felt were undervalued and might appreciate more in the future.

These collectors might have wagered that the performance of the player would improve (think of this as "growth" investing), but they could also bank on finding an underappreciated player that would later be recognized ("value" investing).

They went out and deployed capital buying cards that they believed would appreciate in value, and then monitored the performance of that portfolio. Sound familiar?

This was about one of rarest cards in the world (the T206 Honus Wagner, of which there are only roughly 60 in existence), which just sold for a record $6.6 million.

Let that sink in for a second... This is a piece of cardboard with some ink printed on it depicting a player who died almost 70 years ago.

Unlike a stock, which technically gives you a stake in a company – and its corresponding cash flows – there is no fundamental economic value to the card.

It doesn't produce any cash flow and never will. Furthermore, you don't own the rights to any of the information on the card. That is owned by MLB, the Pittsburgh Pirates, and the estate of Honus Wagner.

The first answer is scarcity. Each Honus Wagner card is more than 100 years old, and fewer than 60 of them exist. They're extremely rare.

However, the same could be said about the drawings my four-year-old makes almost every day. Those are all one-of-a-kind... but they won't be selling for seven figures anytime soon.

The real answer is identity.

We identify MLB, the Pittsburgh Pirates, Honus Wagner, and the entire trading card business as something that has value.

► Again, there are no cash flows from these cards, so this value comes from something abstract...

As a society, we (or at least trading card enthusiasts) have decided to ascribe value to these items. Does that make it wrong?

Throughout history, humans have ascribed value to various "brands." Picasso is a brand. Jewelry is a brand. Gold is a brand!

None of these have any fundamental economic value, but we have decided to value them anyway.

If enough people decide to ascribe value to these items, then they have value.

► Now, just replace the idea of a physical card with a video clip of an NBA player during a game...

Similar to trading cards, this digital asset is unique, and it's also limited in how many are produced.

As with a physical sports card, you don't own the rights to the video, the team logo, or the player likeness.

In fact, they already are.

► Non-fungible tokens ('NFTs') have been white-hot this year...

These digital assets are one-of-a-kind. They can't be replaced, and there are no equivalents anywhere else on Earth. They're verified as unique using the "blockchain" technology that backs cryptocurrencies... and like bitcoin and ethereum before them, NFTs are making some folks incredibly rich:

The best part is this is still just the beginning... and I've found a type of "backdoor" into this market that could multiply your money 5 times over. Get the details right here, including a simple, one-click way to gain exposure to the NFT mania.