1) Former General Electric (GE) CEO Jack Welch passed away on Sunday, which led me to reflect on his legacy. It’s hard to explain to young folks today what a revered corporate leader he was. Early in my investment career in the late 1990s, his stature was rivaled only by Berkshire Hathaway’s (BRK-B) Warren Buffett and AIG’s (AIG) Maurice “Hank” Greenberg.

It’s fascinating – and instructive – to see, two decades later, where these three legends have ended up: Buffett’s company, wealth, and reputation have grown and grown, and he has become truly beloved… while history hasn’t been kind to Welch and Greenberg.

There are a number of reasons for this. In part, it’s because Buffett is genuinely down-to-earth, kind, and caring – words that would never be used to describe the other two.

But I think the main reason is that Welch and Greenberg were primarily – I would argue obsessively – focused on their companies’ stock prices, and would do anything to keep them moving higher.

They thought that the best way to do so was to always “make their numbers” – in other words, exceed (usually by a penny per share) the earnings guidance they gave to analysts. There are three general ways to do so…

First, drive performance from the existing business. To Welch and Greenberg, this meant creating harsh corporate cultures, where managers and executives faced enormous pressure to deliver results – and those who didn’t would be fired.

Welch ranked all of them and fired the bottom 10% every year, earning him the nickname “Neutron Jack.” This “beatings will continue until morale improves” management philosophy worked for a while, but over time poisoned GE – and, worse yet, the many other companies whose CEOs adopted Welch’s approach…

The second way to always “make your numbers” is to make a lot of acquisitions. If you can’t generate the earnings you’ve promised from your current business, then buy what you need! (An added benefit is that acquisition accounting provides all sorts of opportunities to manipulate reported earnings.) Again, this often works initially, but generally is a sure road to ruin as the acquisitions get bigger and bigger, the prices paid get higher and higher, and the accounting gets phonier and phonier…

But at some point, these first two approaches aren’t enough. Companies, industries, and economies don’t grow steadily and predictably, which presents a big problem for CEOs who’ve promised the impossible: steady and predictable financial results.

So they have to resort to technique No. 3: cheat, by engaging in all sorts of accounting shenanigans to “manage” earnings and present a false and misleading picture to investors.

Clever CEOs can do so within the bounds of generally accepted accounting principles (“GAAP”), which allows management significant leeway to make a range of assumptions that can materially affect the as-reported financials. But once CEOs get on this slippery slope, it often leads straight to fraud. Just look at what happened to Lucent, Enron, Waste Management, Worldcom, and – yes – AIG, which resulted in Greenberg’s ouster. Welch did the same things at GE, but was just smart enough not to get caught…

The contrast with Buffett couldn’t be greater. By every word and deed over the past half century, he’s made it crystal clear to his shareholders and managers that he doesn’t care a whit about GAAP earnings or Berkshire’s short-term share price. Rather, he is solely focused on increasing the long-term intrinsic value per share of his company.

I’d like to think that more business leaders are shifting toward Buffett’s approach, but as Joe Nocera points out, Jack Welch Inflicted Great Damage on Corporate America. Excerpt:

There are well-known people who are vilified during their careers only to seem heroic in retrospect. And then there are others who are lionized in their prime, and only later do we realize how harmful their actions truly were.

So it is with Jack Welch, who died on Sunday at the age of 84. I know we’re not supposed to speak ill of the dead, but his effect on American capitalism was too profound – and too destructive – to go unmentioned…

Under Welch, GE’s mission changed. Its new goal was to become “the world’s most valuable company.” Which is to say, he turned the focus of the company to its stock price. Everything became secondary to that. Corporate raiders like T. Boone Pickens and Carl Icahn may have been the first to call for companies to “maximize shareholder value,” but they were outsiders, knocking on corporate America’s door. Welch was the ultimate insider, and when he started to emphasize shareholder value, so did the entire American business culture…

Consider also how Welch kept GE’s stock up during his tenure. Yes, some of it was the result of good management – buying NBC at the right moment, for instance. But he also had an uncanny knack for beating analysts’ earnings estimates by a penny quarter after quarter. You can’t do that at a conglomerate the size of GE unless you are playing accounting games.

Second, Welch turned GE Capital, which had formerly been used to underwrite consumer loans for refrigerators and other GE appliances, into a black box from which Welch could extract whatever profit he needed to make his quarterly numbers. What’s worse, GE Capital began making the same kind of risky loans as the rest of Wall Street – loans that got the company into trouble when the financial crisis arrived. Luckily for Welch, he was long gone by then. His successor, Jeffrey Immelt, took the blame for essentially following Welch’s lead.

Here’s the key point: Because Welch was so idolized, the path he trod became the path every other CEO trod as well. They all began focusing on shareholder value. That became the basis on which they were judged and paid. And it warped the business culture, causing companies to put employees, vendors and even customers behind the primacy of shareholders. If you want to see what happens when you take maximizing shareholder value to its logical extreme, I give you Facebook. Or, for that matter, Enron…

When you see pharmaceutical companies raising the price of drugs to unconscionable levels; when companies cut back on research and development to satisfy Wall Street; when CEOs routinely make $40 million to $50 million a year, you now know whom to blame.

2) This recent Wall Street Journal article, GE Shed About 78,000 Workers in 2019, underscores Welch’s true legacy. I never would have guessed that the company, having reduced its workforce by a quarter last year, is now down to the same number of employees it had in 1951!

3) Speaking of CEOs that history hasn’t treated kindly, watch this short video of former Microsoft (MSFT) CEO Steve Ballmer heaping scorn on the iPhone shortly after it was launched in 2007.

4) In contrast, I really enjoyed this five-minute video of Apple (AAPL) CEO Steve Jobs at the 1997 Apple Worldwide Developers Conference, where the company, every year since 1987, has showcased its new software and technologies for software developers.

In it, Jobs responds to a harsh question about a product that failed by outlining his vision for creating technologies. Excerpt:

How does that fit into a cohesive, larger vision that’s going to allow you to sell $8 billion, $10 billion of product a year? One of the things I’ve always found is that you’ve gotta start with the customer experience and work backward to the technology. You can’t start with the technology and try to figure out where you’re going to try to sell it.

5) Given how much I travel, I often run into someone I know, but I was still shocked to learn that my oldest daughter (who’s a consultant at Ernst & Young) and I were on the exact same flight to Tampa yesterday. It’s not like it’s a common destination – in fact, neither of us had ever been there… What are the odds? Here’s a picture of us on the plane: 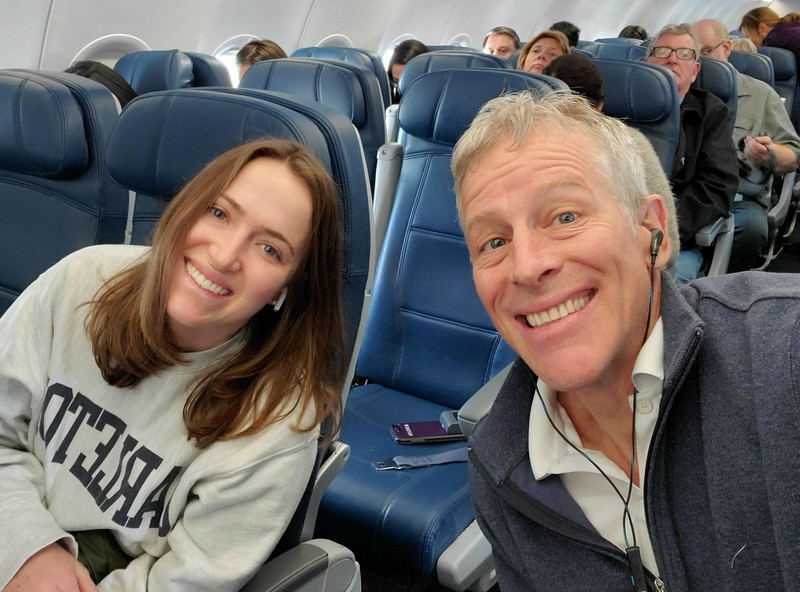