The debate over Uber's stock; Bull Market Shrugs Off Weak Start to December; Spoiled investors; Reason No. 6 why getting rich increases the odds that your marriage goes bad

1) Picking up where I left off in Friday’s e-mail about commitment bias, ride-hailing company Uber (UBER) has been my favorite short for a while. I’ve written about it regularly in my Empire Financial Daily e-mails and pitched it at the Robin Hood Investors Conference in late October (Uber shares are down 16% since then).

In light of my very public commitment to this idea, I recognize that it’s critical for me to actively seek out and listen carefully to the bull case for the stock. So I was delighted when an old friend of mine told me last week that he recently met with Uber CEO Dara Khosrowshahi and had established a small long position.

Here are the key elements of his bull case, with my comments and those of Richard Kramer of Arete Research, the only analyst with a “sell” rating on Uber…

Comment: True. It’s easy for the sell-side analysts at the investment banks that took Uber public in May to pitch the stock as a long under $30 per share since they all told investors that shares were undervalued at the $45 IPO price!

As for the possibility that Uber could beat earnings numbers, Kramer adds:

You need to bear in mind that the fourth quarter is a weak one with slow sales, so a blowout earnings report is unlikely. Keep an eye on how much the company lowers guidance so it can say it “beat” estimates.

Comment: From a competitive perspective, this is indeed a positive for Uber. But it will make it harder for the company to raise money… which it will need to do if it keeps burning cash, as I expect. Nor is weak investor sentiment toward money-losing companies good for Uber’s stock.

Comment: True. But it also reduces Uber’s total addressable market and its desire to be a “life app.” Here’s an excerpt from a company press release in September:

Uber started with on-demand rides, but we’ve grown to offer access to everything from food delivery to electric bikes and scooters.

Comment: Same comment as above… Kramer argues that “Uber can have profits or growth, but not both.”

Comment: Kramer writes, “This is simply uninformed. I’m based in London, and this is being taken extremely seriously. Reading the release for ‘British English’ shows how damaging the findings were.”

And even if Uber prevails here, it faces another existential threat in Britain… In a case that mirrors the California law that’s due to go into effect on January 1, its drivers have sued to be considered employees, not contractors – and have been winning so far.

Comment: It’s hard to know how much this legislation will increase costs and how much increasing prices will dampen demand. But it isn’t good news, so investors should take the company’s assurances with a huge grain of salt.

Kramer adds: “Uber is misleading investors when it says that 92% of its drivers work fewer than 40 hours a week and 45% drive fewer than 10 hours. This overlooks the fact that 10% of drivers do the same as 50% of the rest! It is on those drivers that Uber faces higher costs, which might also change the shape of their workforce.”

Comment: This is similar to the old “good bank, bad bank” argument. But much of Uber’s enormous $48 billion market cap is based on investors’ belief in a massive total addressable market – which goes away if Uber starts exiting various geographies and lines of business.

Comment: Kramer notes, “This overlooks the city-by-city combat. It’s not one market, but a series of U.S. cities and local delivery markets that Uber and Lyft fight over – and neither can afford to lose ground.”

This argument also overlooks the many other competitors (including regular taxis) that aren’t likely to go away. This industry isn’t like airlines or railroads, where there are huge barriers to entry and natural oligopolies.

2) I knew the market was having a strong year, but hadn’t realized that it’s on track for its best year since 2013 – as this article in the Wall Street Journal highlights: Bull Market Shrugs Off Weak Start to December. Here’s the chart that accompanied it: 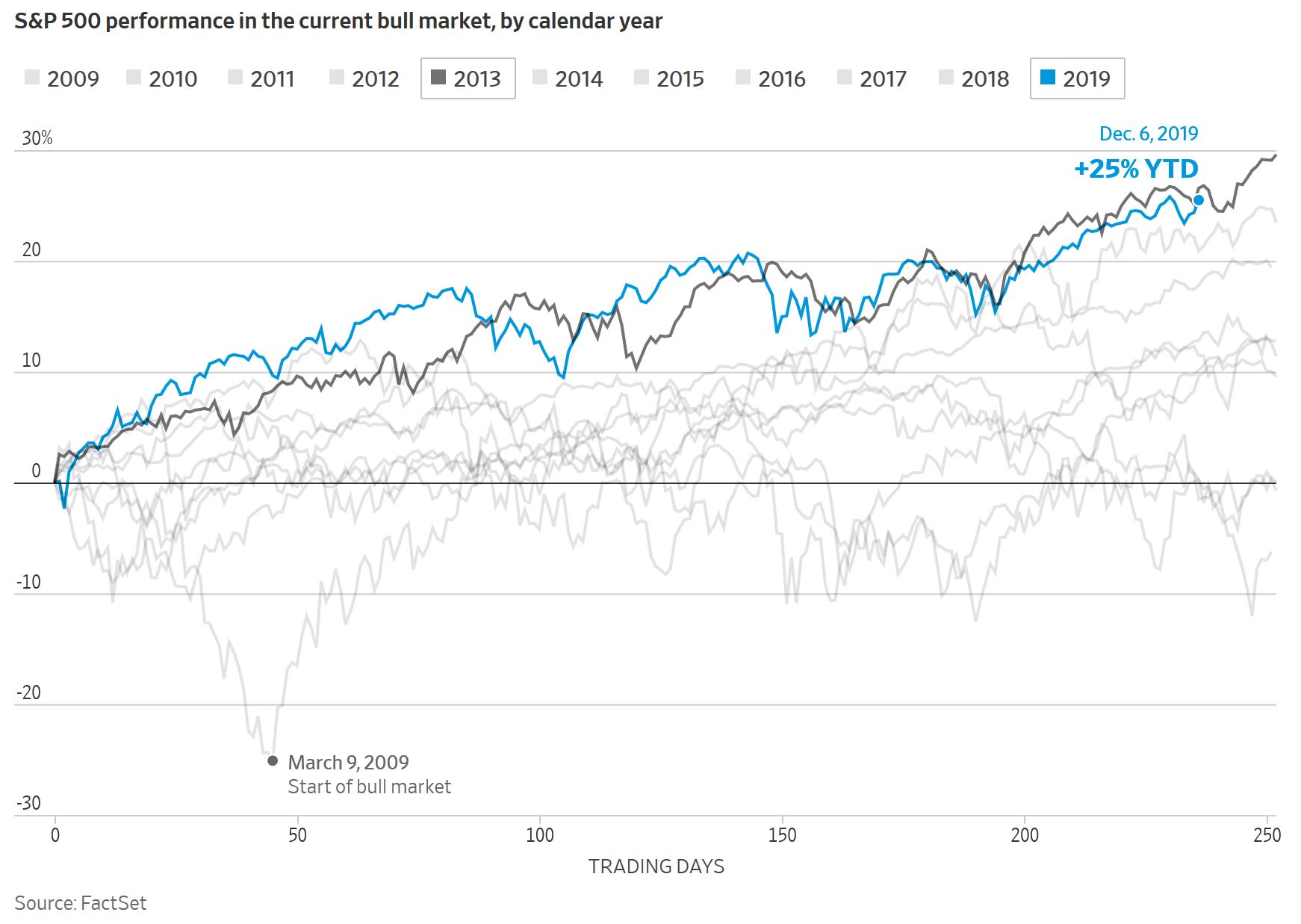 3) Investors are getting very spoiled, as this funny tweet highlights: 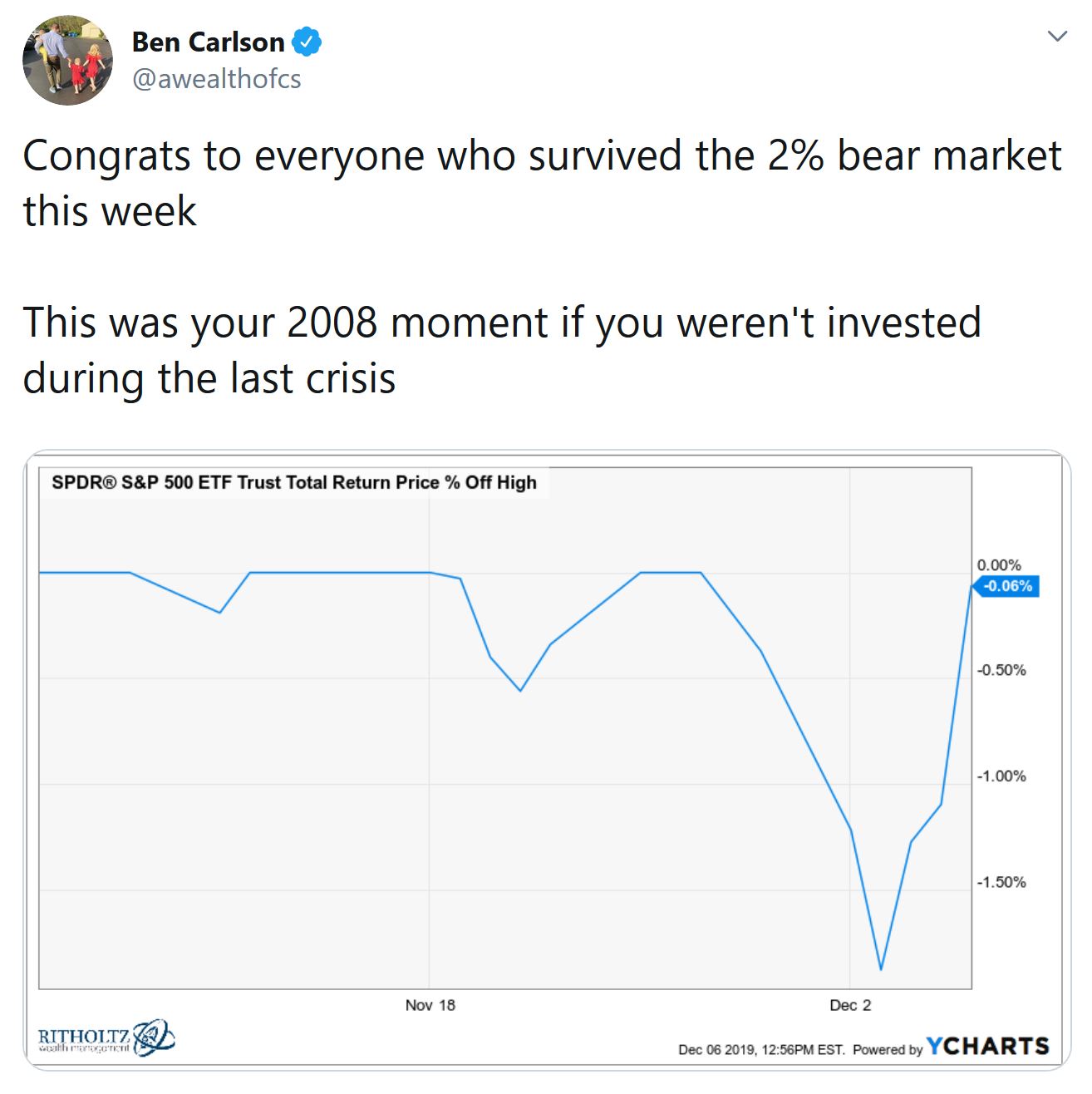 4) Reason No. 6 why making a lot of money can actually increase the odds that your marriage goes bad: Deciding how to spend (or not spend) the newfound wealth can lead to conflict.

One friend told me that when he hit it big, he couldn’t wait to spend his fortune to enjoy the luxuries of life. In particular, he wanted to live in a big brownstone and own a mansion in the Hamptons.

But his wife was super frugal, so she was uncomfortable with their newfound wealth – and even more uncomfortable with showing it. He ignored her wishes and bought a big, fancy brownstone – and an even bigger, fancier weekend home. He believes that this is the main reason that they got divorced a number of years later…