The bursting of the crypto versus Internet bubbles; Interview with Sam Bankman-Fried; Memes; Retailers vexed by rising 'shrink'; These Travelers Would Rather Eat Glass Than Pay an Airline Fee

1) In last Wednesday's e-mail, I shared a friend's pitch for the Grayscale Ethereum Trust (ETHE). For me, this was the most compelling part:

I think about my crypto investments the same way I do my stocks, to the extent the analogy can apply: value investing, multi-year time horizon, short-term and technical/market considerations around the margins of the trading decisions.

1. Ethereum is hands down the No. 2 most legitimate cryptoasset after Bitcoin.

It long ago won the battle to become the dominant level-1 smart contract platform. An enormous amount of developer person-hours have been and are being put into using Ethereum to build eventually-real-world-useful things. The sunk costs for developers to gain fluency in its developer tools are also enormous. They're never going to switch if they can help it. Other Layer-1 blockchains will fill various niches, but by now it is highly unlikely that any of them will challenge Ethereum for dominance. The investment case for Ethereum is a weird amalgam of owning a quasi-equity stake in what should remain the dominant platform for an ecosystem that should keep growing exponentially and start adding real-world value, and the No. 2 crypto store of value, and now a bond with yield. Ethereum could someday overtake Bitcoin as the No. 1 store of value. That is the No. 1 bear case for Bitcoin these days.

Over the years, I've made a fortune investing in the best assets in bombed-out sectors – buying stocks like Apple (AAPL), McDonald's (MCD), Home Depot (HD), General Growth Properties – but I haven't pulled the trigger on ETHE – or any other crypto asset.

As I listened yesterday to a podcast that mentioned the bursting of the Internet bubble from 2000 to 2002, I realized why...

Back in late 2002, almost exactly 20 years ago, I was buying all sorts of bargains amid the rubble in the aftermath of the bursting of one of the biggest stock bubbles in history – one of the few that rival the insanity of the crypto madness that gripped the world from mid-2020 through the end of last year.

What gave me the conviction to catch so many proverbial "falling knives" was that I could see that the Internet was going to be huge. Even in the days before the iPhone, social media, and apps I use constantly today like Google Maps, I was regularly:

In short, the Internet, even in its early days, had become a major part of my business and personal life, and I would have paid almost anything to maintain access to it.

In sharp contrast, in the five years I have been following cryptos closely, there hasn't been a single instance in which I said to myself, "Gee, I wish I had an account with some bitcoin in it."

Not only that, but of the thousands of people I know, dozens of whom own bitcoin, ethereum, or some other crypto, I'm not aware of a single instance in which one of them has ever used that asset to buy anything.

Crypto bulls (like my friend above) have been arguing for years that crypto is the foundation of a new technological revolution and one crypto or another will eventually be used "to build eventually-real-world-useful things" – but I can find basically zero evidence for this... And, trust me, I really am looking with an open mind (unless you consider buying drugs on the dark web and collecting on extortion schemes useful things).

Until this changes, to me anyway, cryptos will remain what they've always been: instruments of speculation, surrounded by astounding and disgusting amounts of fraud and malfeasance.

I don't often complement the Chinese government these days... but in this case, those officials got it exactly right (and we got it exactly wrong): A little over a year ago, they simply banned cryptos and everything related to them.

2) Speaking of fraud and malfeasance, Sam Bankman-Fried ("SBF"), the disgraced founder of now-bankrupt crypto exchange FTX and related hedge fund Alameda Research, was interviewed yesterday (via video from the Bahamas) by Andrew Ross Sorkin at the annual New York Times DealBook conference. Here's a summary of what he said (with video clips): 'Look, I Screwed Up': Sam Bankman-Fried Is Challenged on the Collapse of FTX. Excerpt:

Mr. Bankman-Fried seemed to frame the failure of his $32 billion cryptocurrency exchange, FTX, largely as a risk management problem that got out of hand. Here's a look at his comments:

What a load of nonsense!

SBF is a pathological liar – the only question in my mind is whether he's such a narcissist/psychopath that he actually believes what he's saying (i.e., he'd pass a lie-detector test).

I agree with Mike Novogratz, who, on CNBC's Squawk Box this morning, called SBF "delusional" and predicted that "he will spend time in jail."

The best that I can say about SBF is that I don't think he's as bad as Bernie Madoff. I think he's more like Elizabeth Holmes, who started Theranos with good intentions, but committed massive fraud over time as the business went against her – for which she was just sentenced to 11 years in federal prison.

3) The hilarious memes have already started...

Here are two of my favorites: 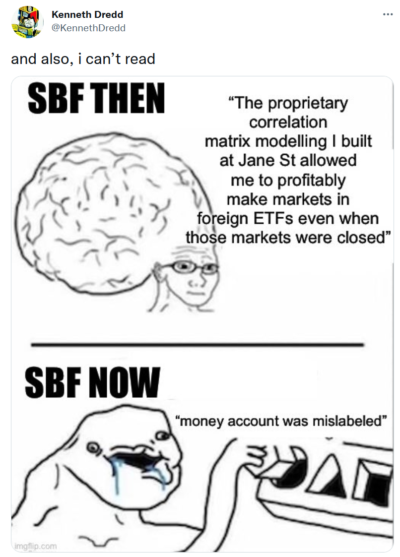 4) Wow, I hadn't realized how bad theft (aka "shrink") has gotten at retailers...

This is what Target's (TGT) CFO said on last month's third-quarter earnings call:

Here's an article about the problem across the industry: Retailers vexed by rising "shrink". Excerpt:

The National Retail Federation is out with its 2022 Retail Security Survey. And it says retail "shrink" – which includes problems like theft, gift card fraud, and inventory mismanagement – accounted for nearly $95 billion worth of losses last year. That's about $5 billion more than the year before.

Meanwhile, there's been news that Target, Walgreens, and other major retailers have closed some locations or shortened store hours because of thefts.

Maybe you've seen stories about people running into stores and grabbing items in plain sight. Mathews said thieves are usually not so dramatic and much more calculated.

"They're smart," he said. "They'll often steal just below the felony threshold. And they're also aiming for certain types of products."

Like denim, ink cartridges, and teeth-whitening strips – items that are easy to pocket and have high resale value.

People coming into stores to steal accounts for close to 40% of retail shrink. Nearly 30% is theft by employees.

5) This is totally me! These Travelers Would Rather Eat Glass Than Pay an Airline Fee. Excerpt:

Frontier Airlines boasted about collecting $78 per passenger in fees this summer. Denver frequent flier Ashlee Lane can brag that she didn't contribute a cent to that record haul.

The 39-year-old nanny flies her hometown airline several times a year and refuses to pay for bags, seat assignments, and other extras that budget carriers peddle nonstop during booking. She pays only for airfare. She has taught her whole family how to pack only the essentials.

"I feel like I'm the person they don't want flying," Ms. Lane jokes.

No-frills airlines like Frontier and Spirit Airlines bank on travelers paying more than those cheap fares they dangle. Many of us grin and bear the upsell in the name of travel must-haves like a change of clothes.

But a surprising number of passengers fly budget airlines without running up fees that can double the price of a ticket. Allegiant Air and Sun Country Airlines say one in five passengers pay nothing more than airfare. Frontier and Spirit don't divulge similar stats. Representatives for both say the ability for passengers to avoid fees shows their oft-criticized a la carte pricing model works.

This band of super frugal fliers are a proud, determined bunch.