The Biggest Problem With the U.S. Dollar's Strength

Pete has more than 25 years in the financial-services industry. Before joining Chaikin Analytics, he owned and operated a registered investment advisory ("RIA") firm, and he spent the bulk of his career as a portfolio manager for high-net-worth families, individuals, and institutions.

The value of the U.S. dollar is soaring right now...

On the surface, that sounds like a good thing. After all, most folks want to be strong.

As the dollar strengthens, it reduces the buying power of customers around the world.

That's because a strong dollar makes U.S. goods and services more expensive for those folks. And in turn, corporate earnings start to suffer as the dollar's value keeps rising.

This is just the start... The value of the dollar could keep rising for a while.

To understand what that could mean, let's look at the recent history of the dollar...

Economists have warned of the dollar's demise for more than a decade.

It started with the 2008 housing bust. The experts warned that freshly printed dollars and low interest rates would create "hyperinflation" – rapid, out-of-control inflation.

But hyperinflation never showed up...

Instead, the post-housing-bust economy was one of the greatest bull markets ever. And low interest rates reduced the incentive to hold cash or cash-like financial instruments.

It took a pandemic and an act of Congress to create the inflation we were told would happen in 2008. And now, the dollar's value is at its strongest point in about two decades.

However, the dollar actually declined at first during the pandemic...

That's because the Fed followed its usual playbook. It slammed interest rates to zero and flooded the economy with money.

Then, Congress decided to hand out even more money. Almost everyone in the U.S. got a stimulus check. And more "bucks" in circulation brought the dollar's value down.

The stimulus money in 2020 and early 2021 went right into the bank accounts of millions of Americans. The government sent out more than 472 million payments, totaling $803 billion.

All that available money combined with the tight supply chain created the inflation levels we see today. That's where America's story takes a "strong dollar" turn...

You see, the Fed is now increasing interest rates faster than other global central banks. That makes holding onto the dollar a good idea for institutional players.

It's a little convoluted, I know. But the result is a strong dollar. And when that happens, companies with large global operations eventually suffer. It's easy to see on a chart... 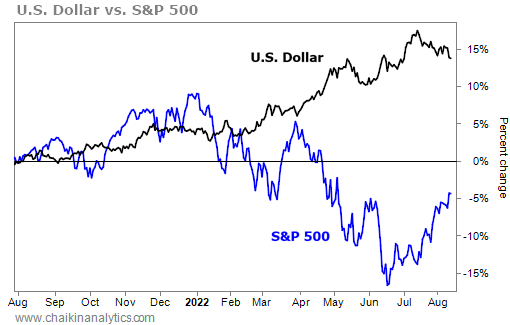 As the dollar's value has risen this year, the S&P 500 Index has dropped. That isn't a coincidence...

The Fed's rate hikes are a tailwind for the dollar, as well as a headwind for the S&P 500.

The dollar is up nearly 20% since early 2021. And this big increase is finally catching up to major corporations with large-scale international operations...

Mega-retailer Walmart (WMT) is one of the latest power players to sound the alarm. The company warned that its profits will likely be lower due to changes in consumer spending.

Inflation is pushing prices higher across the board. It's forcing consumers to sacrifice things they want so they can afford to pay for the higher costs for things they need – like food.

Given the strong dollar, that problem is even bigger for foreign consumers...

The simple truth is that companies with international operations are facing major economic headwinds right now. Those headwinds are the direct result of the strong dollar and the Fed's fight against inflation.

And the Fed will keep rates high as long as inflation remains elevated. That means the world's businesses could be forced to deal with a strong dollar for a much longer period.

A major buying opportunity is coming soon. But for now, we need to remain patient.

More specifically, avoid rushing into companies with significant sales exposure in foreign countries. The strong dollar makes it harder for these companies to do business.

Editor's note: Right now, Marc and his team are following a massive and surprising new transition – as Marc says, it's one that could determine the next group of millionaires... along with who gets left behind. In short, Marc believes that a new form of technology will disrupt everything you know about America and cause a huge change in the way thousands of companies will need to do business. Get the full story here.