'Sweatpants Nation' No More... It's Time for 'Revenge Shopping'

► For many folks, it’s time to step away from the adjustable waistband…

With COVID-19 vaccination rates accelerating, the return of dining, travel, and office life is upon us. That means it’s time to get dressed… in clothes with actual buttons and zippers. While a return to normal life is welcome and exciting, apparently some of us have forgotten how to get dressed.

Much ink has been spilled discussing how people have forgotten how to be socially extroverted, flirt, or have proper manners upon re-entry into the real, non-Zoom world. But earlier this month, the New York Times addressed a different issue… What if some of us have forgotten how to get dressed?

Apparently, anxiety about reclaiming a sense of stye is leading to banner business for some stylists. According to the Times…

“I feel like people need to be reintroduced to their closets again,” said Allison Bornstein, a celebrity stylist who began offering virtual styling sessions to noncelebrities early in the pandemic – and last month was her busiest month to date. “People are like: ‘OK, it’s time to re-enter the world, and I need help. I have all this stuff, I don’t know what I want to wear, and I don’t like anything that I have,'” Ms. Bornstein said.

Despite a record amount of time at home over the last year enabling closet cleanouts – and a record amount of second-hand goods received at resellers like ThredUp (TDUP), which was so busy it had to stop taking in clothing for a while – some people are still left wondering if what’s in their closet meets their needs now that they will be leaving the house.

The recognition that the life ahead may not look exactly like the life before is prompting a whole second wave of purges. Maybe that’s because old routines – like five-day, in-office weeks – are no more. Or instead because all this time to reflect has sent people back into Marie Kondo-mode, again questioning which goods spark joy. The pre-pandemic KonMari clean out was about getting rid of high heels or ties that no longer spark that joy… But what if the last year at home convinced you that no tie or high heel was ever going to spark joy again?

A survey out from the American Psychological Association last month found that 61% of American adults “reported experiencing undesired weight changes since the start of the pandemic.” According to the study, 42% gained more weight than they intended, with an average gain of 29 pounds and a median gain of 15 pounds.

Simple math would imply that there must be a fair number of heavy-gaining outliers to come up with a mean-average gain that is almost twice as much as the median. A bunch of people who fall into this category are going to need a new wardrobe.

Whether purging clothes is prompted by lifestyle, personal style, or waistline changes, the article advocates for responsible disposal of excess items. After all, a recent report from consultant McKinsey found that “for every five garments produced, the equivalent of three end up in a landfill or incinerated each year.”

As an alternative to the garbage bin, the article suggests donations to organizations such as the Salvation Army, Goodwill, or Dress for Success, consigning at resellers like The RealReal (REAL) for luxury goods and ThredUp for everything else, or bringing used goods to stores that collect them. As an example, Madewell collects used denim, which ultimately ends up repurposed as housing insulation.

But even after the purge is complete, the Times warns that “getting dressed again will require practice.”

In preparation for re-entry, apparel spending is beginning to accelerate…

According to Coresight Research, which does weekly tracking of consumer spending based on data submitted from its shopper panel, consumers are increasingly devoting dollars to the apparel category. Coresight’s data indicate that the proportion of respondents who said they were purchasing more apparel now than they were pre-pandemic doubled from a month prior… 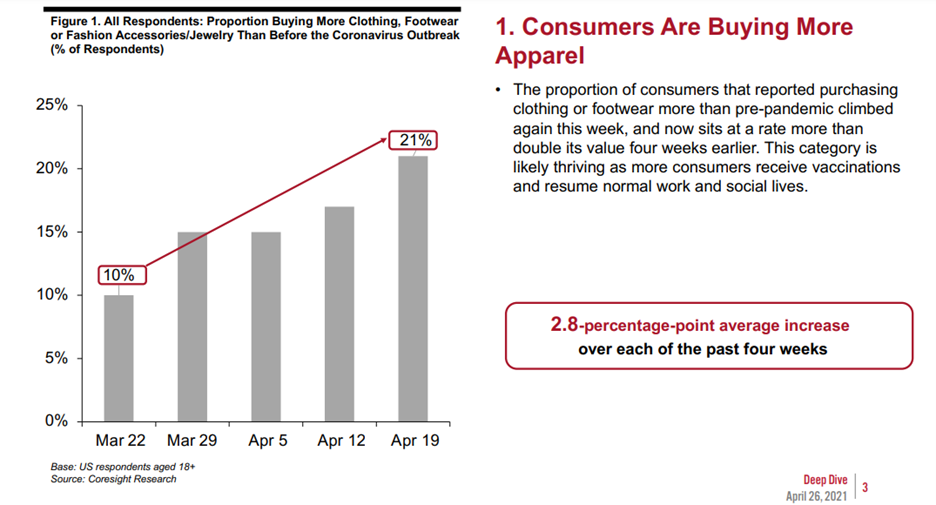 Additionally, a newly vaccinated populace is increasingly shopping in-store. According to Coresight, the percentage of respondents purchasing apparel, footwear, or accessories in-store increased from 23% a month ago to 29% in the last two weeks. Also notable: More shopping in-store does not mean less shopping online. As in-store visits with purchases climbed, the percentage of respondents making online purchases in these categories stayed steady.

It seems a good portion of Americans developed an online-shopping habit when they couldn’t go to stores. Now that they can go safely again, many folks are back in stores… But that doesn’t mean they have quit browsing and buying on their phones, computers, and tablets.

If that’s indeed the case, then the stimulus is working as it’s supposed to – the government handed out that money to help the truly desperate. For everyone else that didn’t really need it, the government was hoping it would get spent, not saved. It seems at least some of the “stimmies” are making their way into the real economy via the purchase of discretionary goods.

This is sometimes defined as people seeking comfort in expensive purchases, looking to make up for social activities or travel that were or still are restricted. Others see revenge shopping as a way to avenge lost time and months of sacrifice.

This time last year, when China began to reopen after containing COVID-19, reports of revenge shopping began to crop up. One widely circulated news item revolved around the stunning $2.7 million in one-day sales that a Hermès (RMS.PA) store in Guangzhou reportedly tallied shortly after its reopening.

Whatever is driving the revenge shopping, it seems to be accelerating.

When luxury goods giant LVMH (MC.PA) reported first-quarter results a couple of weeks ago, sales in its Fashion & Leather Goods division – which houses power brands like Louis Vuitton and Christian Dior – saw sales jump a mind-blowing 52%. Even correcting for the depressed results during the first-quarter lockdowns of 2020, results were still stunning… The division’s organic growth compared to the “normal times” of 2019 still clocked in at 37%.

Things were even stronger at Hermès, where first-quarter sales were up 41% versus the same period in 2019, led by 94% growth in non-Japan Asia. Japan and the U.S., which were still working on taming the virus, trailed with 20% and 23% growth, respectively. Europe – much of which was back in lockdown during the first quarter – saw sales fall slightly.

While Americans may lean less into luxury goods when doing their revenge shopping than the Chinese (at least so far), it’s clear that a combination of stimulus checks, making up for lost time, a need or desire to change up personal style, and a carpe diem attitude after a very tough year have created a strong tailwind for retail sales in general and apparel and accessories in particular.

Earlier in April, the U.S. Commerce Department reported that retail sales grew 9.8% from February to March. Clothing and accessories clocked the second biggest sequential growth of any category, coming in at 18.3%… 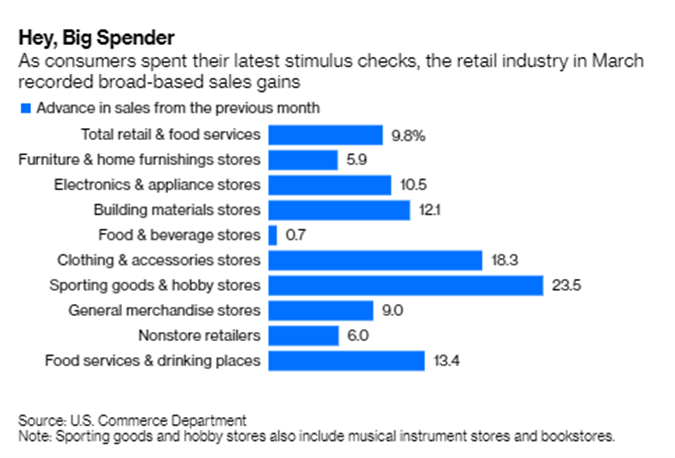 As is often the case, the market has been forward-looking when it comes to retail names. As you can see in the chart below, the SPDR S&P Retail Fund (XRT) has been on a tear this year and is now up 44% year to date… 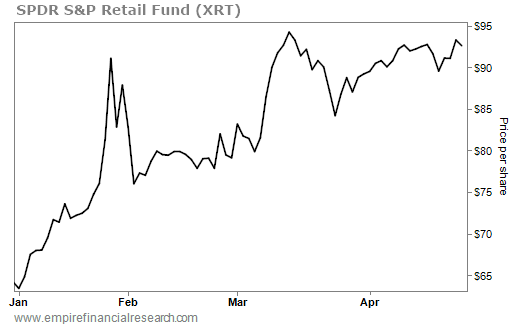 Zooming out for a five-year view, you can see that XRT shares are about double their pre-pandemic level, despite counting a substantial number of brick-and-mortar retailers among the fund’s components… 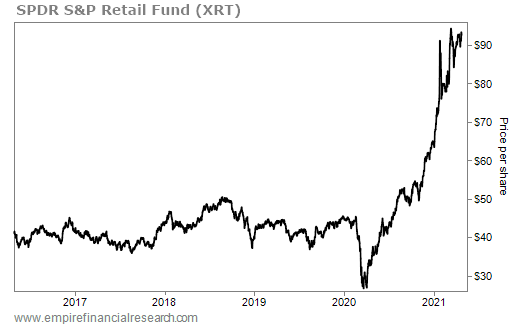 The retailers that were challenged by online migration before COVID-19 still are… but now you’re just paying a lot more for them.

The easy reopening trade in retail is over, even though the revenge shopping has only just begun, at least here in the Americas. That doesn’t mean there won’t be any winners from this sector going forward… But with valuations more than recovered, retailers will need to beat already-elevated expectations to go up another leg.

In the mailbag, readers react to Steve Sjuggerud’s guest essays on the coming ‘Melt Down’…

Have you done any revenge shopping? Do you feel like your clothing needs – or personal style – has permanently changed as a result of the pandemic? Has anyone done some epic closet purging over the last year? Share your thoughts in an e-mail to [email protected].

“I’ve been worried about a big drop in the market. I am 79 and want to leave a big, full purse for my family. As a schoolteacher, I started investing in 1964 and have gradually built up over 500K.

“If I pull out ‘everything,’ I’ll still lose too much to the IRS. So what do I do?

“I pray that Dr. Sjuggerud will tell us. All of the presentations I’ve watched so far were basically sales pitches to join his service.

Berna comment: Kay, if you are investing in tax-deferred accounts like a 401(k) or 403(b), you can sell securities with gains and reinvest the proceeds into less volatile securities or cash without paying taxes now. You will only pay taxes if you withdraw the funds out of the account. You probably know this, but I wanted to mention just in case, as many teachers I know do most of their saving and investing in similarly tax-deferred accounts.

“Yes. I set an appointment with one of my money men (I have two) to tell him I want to sell 1/3 to 1/2 of an IRA. That would give me my original investment back. I’m not the most disciplined guy and I have about 15 stocks that I have held from 6 months to 8 years.

“So I’m working on the selling mind set. Not easy.

“However, I’m testing my discipline by now by only ordering one martini (not two) at my local joint happy hour that finally reopened.” – Bill G.

Berna comment: Enjoy your martinis, Bill… whether one or two at a time. It has been a long year of making cocktails at home or going without.

“Much appreciated article on avoiding the inevitable Melt Down, including that visualization technique! I think I had begun to employ a lighter version of the one described. Also appreciated you including Otto’s comments! Helpful!

“Also the link to the secret currency – again. Been a bit hesitant moving in that direction but thinking a balanced portion of such metals here appears both timely right now and with greater upside potential than common coins and bullion. Thanks again!” – John F.

“Hi, no matter what happens in the market, an investor at any given time must be prepared to lose 50%. It happened to me once and will happen again. My portfolio is divided in buckets, long term hold, sell when down by 15%, bonds, and 25% cash. Income is derived from dividends (50%) and selling/buying puts and calls (50%). When investing in capital efficient companies, any pullback is temporary, and the long-term thesis will remain intact. After the 2008/09 meltdown I realized I needed to formulate a plan and have a clear strategy, lots of reading – including Stansberry’s publications and recently Empire Financial – has educated me on the many pitfalls the market can throw at you and how to deal with the unexpected.