Stop worrying about inflation; Where's the bottom in high-growth stocks?; Which countries use the U.S. dollar as their official currency?

1) The front page, above-the-fold stories in both the New York Times and the Wall Street Journal this morning are about inflation hitting a 40-year high (accompanied by lots of scary charts, of course) – take a look: 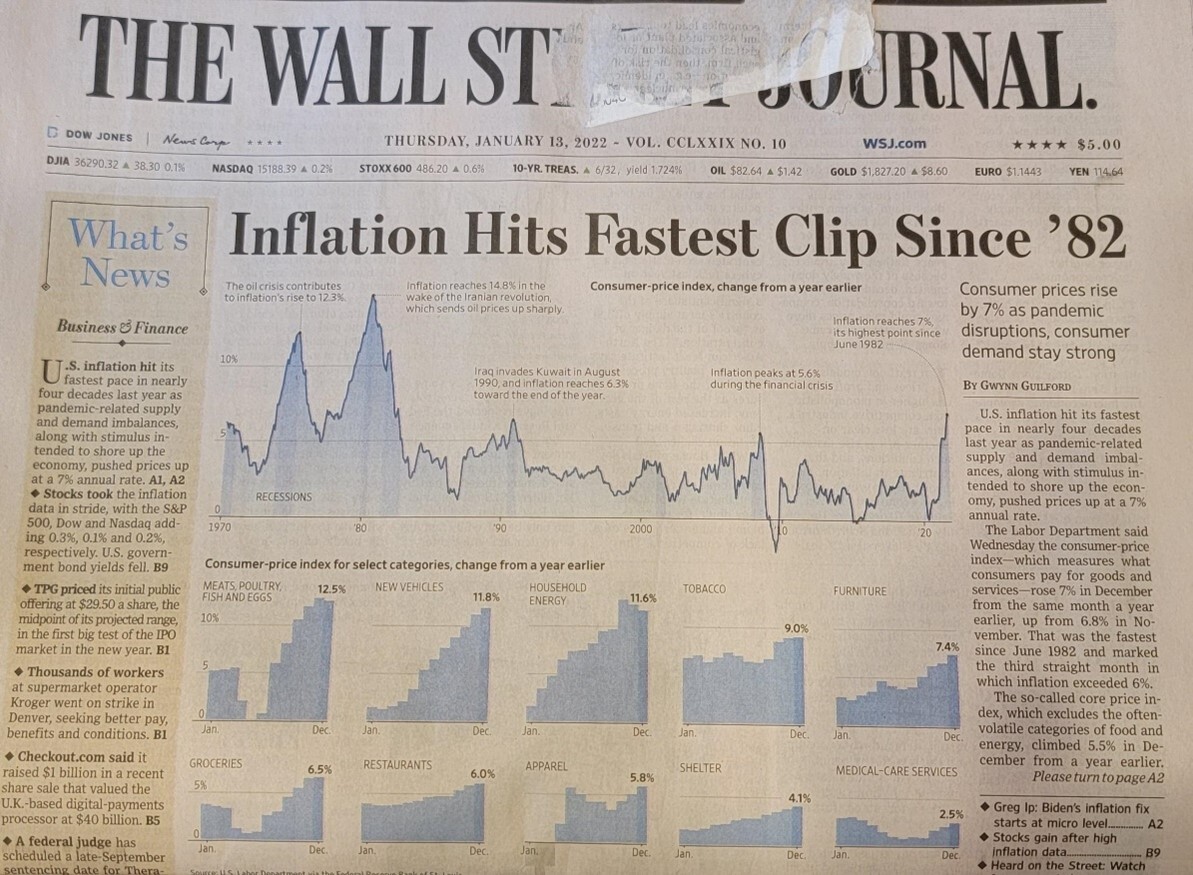 Just 37% of Americans name the virus as one of their top five priorities for the government to work on in 2022, compared with 53% who said it was a leading priority at the same time a year ago. The economy outpaced the pandemic in the open-ended question, with 68% of respondents mentioning it in some way as a top 2022 concern. A similar percentage said the same last year, but mentions of inflation are much higher now: 14% this year, compared with less than 1% last year.

Should inflation be a top concern? In a word: no.

My colleagues Enrique Abeyta, Berna Barshay, Herb Greenberg, and I don't often agree – that's the beauty of our diverse team. But when we do, we're usually right...

Yesterday, we were all on a call discussing various things, and when the topic of inflation came up, not one of us argued that it's going to be a major issue this year for the economy or markets. Here's why...

Inflation is calculated based on the rise in the consumer-price index relative to the same period a year ago.

Well, think about where we were a year ago: after a decline in the middle of 2020, COVID-19 had returned with a vengeance. And because vaccines weren't yet widely available, daily COVID deaths soared, hitting a grim all-time high of 4,406 a year ago to the day (for perspective, 1,827 Americans died of the disease yesterday – still a terrible toll, but 59% lower). Not surprisingly, the economy was limping along as people stayed home and businesses closed. Unemployment was at 6.7% in December 2020.

With unemployment down to 3.9% last month, companies are scrambling for workers – and raising wages, especially at the low end. To a large extent, legislation raising the minimum wage to $15 per hour is becoming superfluous – companies are already having to pay this (or more) to fill their openings.

In light of the stark contrast between a year ago and today, is it any surprise that inflation – again, measured on a year-over-year basis – is up so sharply? 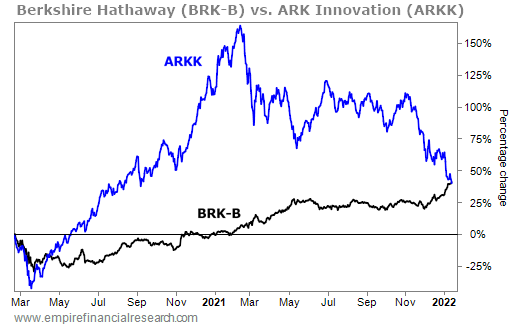 This certainly captures the incredible outperformance of the highest-growth stocks for 11 months, from late March 2020 through mid-February 2021 – and the painful pullback they've experienced since then.

Is this the bottom for such stocks?

I doubt it. They tend to overshoot to both the upside and the downside...

What signs might I look for to indicate a bottom?

Off the top of my head, how about this: five years ago, ARKK, which is a great proxy for this sector, had a mere $15 million in assets under management.

Now they've been cut in half.

No way is that the bottom...

When bubbles like this burst, my rule of thumb is that they decline by at least 80%, so that would bring ARKK's assets to $5.6 billion.

But even this would probably be too early...

It reminds me of the saying: "What is the definition of a stock down 90%?"

To be clear, I'm talking about ARKK's assets, not the share price... which I think still has room to fall, but not by 80% to 90% from its peak. We're actually bullish on some of its holdings like Block (SQ) – the new name for Square – and Shopify (SHOP).

In summary, be careful out there.

An entire generation of investors has been conditioned to buy every dip. You can see this, for example, in two of my least favorite Dirty Dozen stocks, GameStink (GME) and AMC Entertainment (AMC).

I suspect that many of these investors are going to have to learn the hard way that there's another side of buying the dip, which is catching a falling knife, which I can tell you – having experienced it many times myself – is no fun...

3) This will win you a trivia contest: What other countries use the U.S. dollar as their official currency (excluding a bunch of tiny islands like Palau and Bonaire)?

And for bonus points, while Liberia has its own currency, according to Lonely Planet: