1) I really enjoyed this interview with investing legend Stanley Druckenmiller, who has never had a down year in more than four decades of investing and once compounded at more than 30% annually over 30 years. Here's an overview of the topics he covers:

Here's Druckenmiller on the implications of the "incredible wave of digital transformation":

From 1995 to 2000, you had an incredible wave while the Internet was being built. What you have now is this incredible wave of digital transformation, particularly moving onto the cloud.

I used to say two to three years ago in some interviews that we're in the bottom of the first or second inning in terms of digital transformation. And this is a 10-year runway.

Well, COVID sort of jumped you from the bottom half of the first inning to the sixth inning. I think [Shopify (SHOP) CEO Tobi Lütke] said we went from 2019 to 2030 [in terms of e-commerce sales] in one year.

I think the difference now is if you haven't moved to the cloud, you're dead because who you're competing against, they can just beat you because the technology is so important.

So, now, full disclosure, I didn't see what was coming in 2000. But I [have a difficult time coming up] with a scenario that this digital transformation thing is going to collapse and these SaaS [Software-as-a-Service] companies are going to go away.

The biggest problem you have now is the overall bubble and asset prices. The good news is if we had this conversation two months ago, the good [SaaS stocks] were like 45 times to 50 times sales. Not earnings but sales. They're down to – there's a range – I'd say now 10 times to 25 times sales for the good ones.

So, if the problem is price and – in my opinion – that is the problem: a lot of that has been wrung out. And I think if you hold these names for three to four years, they could easily grow into their valuations.

On which stock might reach a $5 trillion valuation first:

So, before I give my first guess: I have no idea.

If you put a gun to my head or we're going to Vegas:

No. 2 would be Microsoft.

Google could have a big pop, ironically, if the government breaks them up because their core search business is literally the best business I've ever seen.

But they keep trying all this experimental stuff that challenges shareholder value. But those guys are so rich. They're more interested in changing the world right now and good for them.

When I've looked at all the investors [that] have very large reputations – Warren Buffett, Carl Icahn, George Soros – they all only have one thing in common.

And it's the exact opposite of what they teach in a business school. It is to make large, concentrated bets where they have a lot of conviction.

They're not buying 35 or 40 names and diversifying.

I don't know whether you remember that Icahn a few years ago put $5 billion into Apple. I don't think he was worth more than $10 billion when he did that.

[In 1992] when I went in to tell Soros that I was going to short 100% of the fund in the British pound against the Deutschmark, he looked at me with great disdain.

He thought the story was good enough that I should be doing 200%, because it was sort of a once-in-a-generation opportunity.

So, [these investors] concentrate their holdings. This is very counterintuitive.

In my thinking, [concentrating your bets] decreases your overall risk because where you tend to be in trouble is if you have 35 or 40 names.

If you start paying attention to one. If you have a big, massive position, it has your attention.

My favorite quote of all time is maybe Mark Twain: "Put all your eggs in one basket and watch the basket carefully."

I tend to think that's what great investors do.

On knowing when to sell and using stop losses:

The other thing to me [that makes a good investor] is you have to know how and when to take a loss. I've been in business since 1976 as a money manager.

I've never used the stop loss. Not once. It's the dumbest concept I've ever heard. [If a stock goes down 15%] I'm automatically out.

But I've also never hung onto a security if the reason I bought it has changed. That's when you need to sell.

If I buy X security for A, B, C, and D reasons, and those reasons are no longer valid, [I sell].

So, if I have a thesis and it doesn't bear out – which happens often with me, I'm often wrong – just get out and move on.

Because I said earlier: if you're using the most disciplined approach, you can find something else. There's no reason to hang on to any security where you don't have great conviction.

On why he changed his mind and bought bitcoin for the first time:

Then a couple of things happened.

So, solution in search of a problem. I found the problem: When we did the CARES act and [U.S. Federal Reserve] Chairman [Jerome] Powell started crossing all sorts of red lines in terms of what the Fed would do and wouldn't do.

The problem was Jay Powell and the world's central bankers going nuts and making fiat money even more questionable than it already had been when I used to own gold.

Well, this was huge in my mind. So here's something with a finite supply and 86% of the owners are religious zealots. I mean, who the hell holds something through $17,000 to $3,000? And it turns out none of them – the 86% – sold it. Add that to this new central bank craziness phenomenon.

I got to buying some just because these kids on the West Coast are already worth more than I am, and they're going to be making a lot more money than me in the future. For some reason, they're looking at this thing the way I've always looked at gold, which is a store of value if I don't trust fiat currencies.

And I said, "This is ridiculous."

I took my costs and then some out of it and I still own some of it. My heart's never been in it. I'm a 68-year-old dinosaur, but once it started moving and these institutions started upping it, I could see the old elephant trying to get through the keyhole and [it] can't fit through in time.

I own this company called Palantir and I see it announced that it's going to start accepting bitcoin and they may invest it. That's happening all over the place.

And you know, this thing is never going to have more than 21m [units]. It's a fixed supply.

On career advice for 20-year-olds:

The No. 1 necessary condition would be something I was passionate about.

Particularly in the [investing] business, the people [who] love it like me are so addicted to it and so intellectually stimulated by it.

If you're not passionate about it and only in it for the money, you have no chance of competing with these people.

They're going to outwork and out-execute you.

If you're American – and this isn't true for everyone – but you're probably going to spend 60 to 70 hours a week working. If you don't love it, you're going to blow all that time?

That's not going to be great for your happiness quotient.

I was just lucky. I followed my passion. My mother-in-law says I'm an idiot savant, and I wouldn't be good at anything else.

And I hate to see young people get trapped in something.

2) Another investing legend, Berkshire Hathaway (BRK-B) CEO Warren Buffett, echoes Druckenmiller's view in this 1998 video clip that great investors should concentrate their investments – but advises everyone else to broadly diversify. Here's the transcript of Buffett's remarks:

The question is about diversification, and I've got a dual answer to that. If you're not a professional investor – if your goal is not to manage money in such a way as to get a significantly better return than the world – then I believe in extreme diversification.

So I believe 98% or 99% – maybe more than 99% of people who invest – should extensively diversify and not trade – so that leads them to an index fund type of decision with very low cost. Because all they are gonna do is own a part of America, and they made a decision that owning a part of America is worthwhile.

I don't quarrel with that at all, and that is the way they should approach it... unless they want to bring an intensity to the game to make a decision and start evaluating businesses. But once you're in the business of evaluating businesses and you decide that you are going to bring the effort and intensity and time involved to get that job done, then I think that diversification is a terrible mistake to any degree.

And I got asked that question when I was at SunTrust the other day and... if you really know business, you probably shouldn't own more than six of them. I mean, if you can identify six wonderful businesses, that is all the diversification you need and you're gonna make a lot of money, and I can guarantee you that going into a seventh one – rather than putting more money into your first one – has gotta be a terrible mistake. Very few people have gotten rich on their seventh-best idea, but a lot of people have gotten rich on their best idea.

So, I would say that for anybody working with normal capital who really knows the businesses they've gone into – six is plenty – and I'd probably have half of it in what I liked best.

3) Until a month ago, I used to get only one or two phishing text messages a year, but then I started to receive them almost daily.

It turns out I'm not the only one, as this NBC News articles highlights: Why cybercriminals looking to steal personal info are using text messages as bait. Excerpt:

In the space of a few minutes, Beckwith became the latest victim of "smishing," or SMS phishing, in which a scammer sends a text message to trick a person into turning over some sensitive personal information, which can be used for all sorts of fraud, like siphoning money from their bank account or opening up credit cards in their name.

Unwanted texts have existed for practically as long as the text message itself. But with more people using their smartphones to make payments and as many sites for banks and utilities verify users' accounts through text messages, the fraud floodgates have opened.

The numbers are staggering. The Federal Trade Commission got 334,833 complaints about scam texts last year, more than double the year before. People around the world were exposed to about 125 percent more smishing attempts every three months, a new study from the cybersecurity company Lookout found.

Every time I receive such a text, I block it and report it as spam. Here's a screenshot of the last 10 phishing texts I've received – I hope it helps you identify the types of tricks these scammers use to get you to click their link: 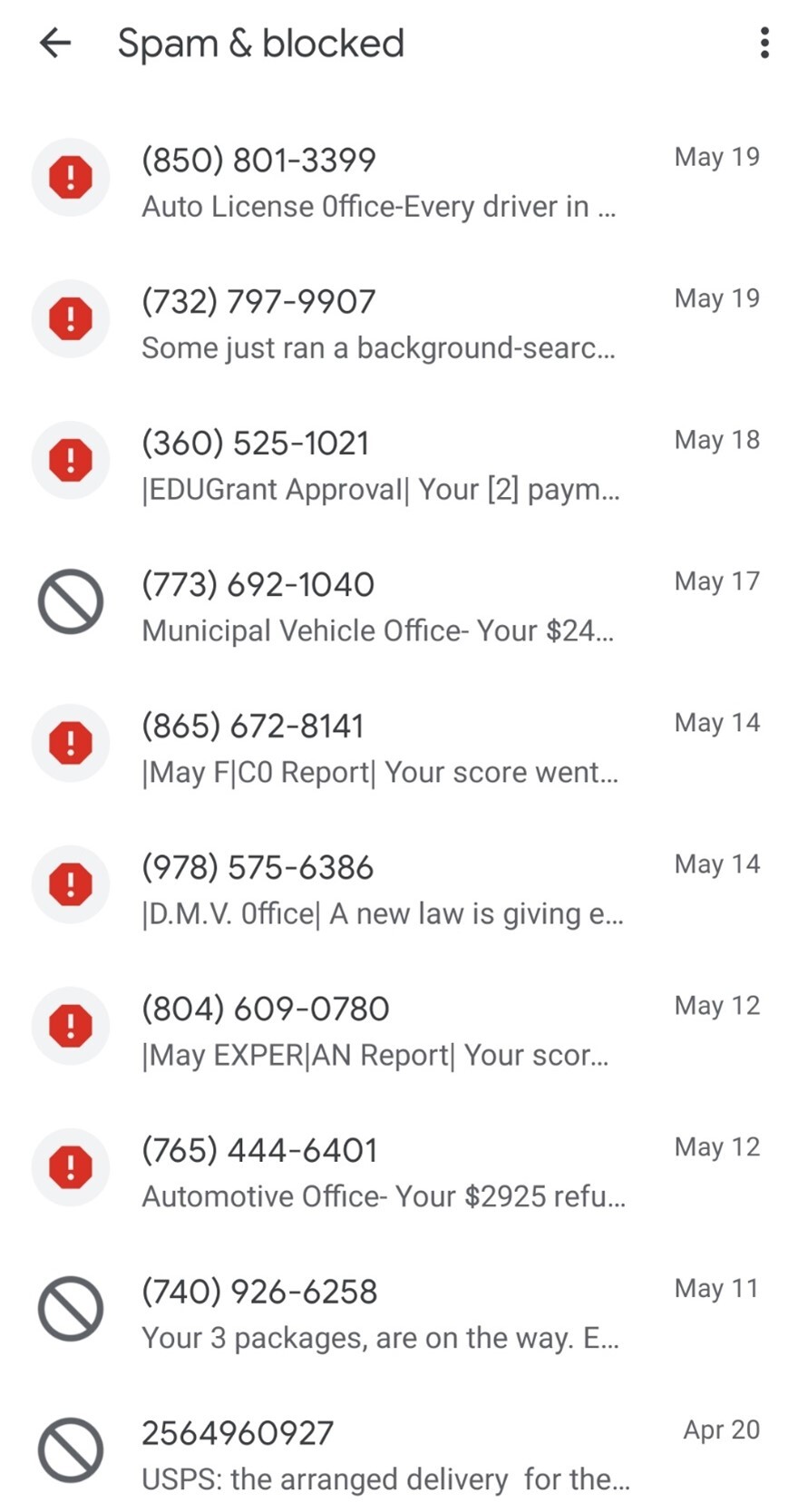 P.S. Empire Financial Research and the market are closed on Monday for Memorial Day. Look for the next Whitney Tilson's Daily e-mail on Tuesday, June 1, after the Weekly Recap. Enjoy the holiday!