Stablecoin Tether is likely to implode; Risks of Crypto Stablecoins Attract Attention of Yellen, Fed, and SEC; Tether: the former plastic surgeon behind the crypto reserve currency; Airports are packed; How to Make the Most of an Overbooked Flight; Please support my climbs for KIPP

1) I'm not as bearish on bitcoin as I used to be, as I explained in my May 12 e-mail, especially now that its price has been cut in half over the past three months.

But I am worried about Tether and other "stablecoins" that provide much of the buying support for bitcoin and other cryptocurrencies. I wrote about Tether's many red flags in my January 19 and June 22 e-mails and published a reader's rebuttal in my January 21 e-mail.

My concerns were heightened further yesterday when I read this story by Bloomberg's Matt Levine: Tether. Excerpt:

Here is an incredible interview that the chief technology officer and general counsel of Tether did yesterday with CNBC's Deirdre Bosa. Tether is a stablecoin that we have talked about around here because it was sued by the New York attorney general for lying about its reserves, and because it subsequently disclosed its reserves in a format that satisfied basically no one. Tether now says that its reserves consist mostly of commercial paper, which apparently makes it one of the largest commercial paper holders in the world.

There is a fun game among financial journalists and other interested observers who try to find anyone who has actually traded commercial paper with Tether, or any of its actual holdings. The game is hard! As far as I know, no one has ever won it, or even scored a point; I have never seen anyone publicly identify a security that Tether holds or a counterparty that has traded commercial paper with it.

Bosa, who had two Tether executives on her show, sensibly asked them about it several times, but you can't win the game that easily! "We don't disclose our commercial partners, so that is quite important," says CTO Paolo Ardoino at around the 5-minute mark. "Given our portfolio composition in commercial paper, we believe that it is quite important to respect the privacy of the banking partners that we work with."

That's not a thing! That's not a thing at all! Every money-market fund just lists all of its holdings, by size and issuer and CUSIP! Tether has broken new ground in the concept of commercial-paper privacy rights! But, why?

Everything in this interview melted my brain. Another favorite came at around the 13-minute mark, when GC Stuart Hoegner says, "We maintain cash, for example, that is many multiples above our single biggest redemption thus far, as well as above our biggest 24-hour period of redemptions," which is... not... that... much? (Banks, for instance, are generally required to have "high-quality liquid assets" sufficient for "a 30 calendar day liquidity stress scenario.")

There is more here, including a promise that audited financials are "only months away." I do not watch a lot of 32-minute business-television interviews, but I found this one riveting.

When Giancarlo Devasini first got into cryptocurrencies in 2012, his interests were distinctly small-time. He piped up on a popular Bitcoin forum to ask if anyone wanted to buy DVDs or CDs for 0.01 bitcoin each, then roughly $0.11, promising free shipping for bulk orders.

Today, the 57-year-old is one of the most influential players in the global cryptocurrency marketplace. From his position as chief financial officer at Bitfinex, a major exchange, and at Tether, its sister currency which has tokens worth $60bn in circulation, industry executives say he is the key decision maker at two companies that now sit at the heart of the opaque daily flows of crypto money worth billions of dollars.

As the world's largest "stablecoin," meaning a cryptocurrency pegged to other assets, Tether is an indispensable lubricant for investors moving in and out of more volatile cryptocurrencies. As a result of its dollar-asset backing, it has become the de facto reserve currency of the global crypto economy.

Tether is also deeply controversial, with government authorities warning about the possible risks it poses to broader markets and questioning past statements it has made about the assets behind the currency...

By the turn of the decade, Devasini, in his mid-40s and with much of his business empire in liquidation, appeared to be looking for a new project.

He had launched a short-lived food delivery service called Delitzia that included a blog about the benefits of organic food. In a November 2009 video posted online, Devasini, on his balcony in a loose-fitting white shirt and with a large garden gnome on the table, made nettle risotto.

Then in 2012, Devasini found bitcoin and threw himself into the crypto world which was, and still largely is, a wild west of unregulated finance. He joined Bitfinex soon after its founding that year, running its trading and risk management operations.

Conclusion: My "spidey sense" is telling me that Tether will soon implode, perhaps as a result of regulators sniffing around and asking good questions: Risks of Crypto Stablecoins Attract Attention of Yellen, Fed, and SEC. Excerpt:

Stablecoins, digital currencies pegged to national currencies like the U.S. dollar, are increasingly seen as a potential risk not just to crypto markets, but to the capital markets as well.

Treasury Secretary Janet Yellen is scheduled Monday to hold a meeting of the President's Working Group on Financial Markets to discuss stablecoins, the Treasury Department said Friday. The group includes the heads of the Federal Reserve, the Securities and Exchange Commission and the Commodity Futures Trading Commission.

"Bringing together regulators will enable us to assess the potential benefits of stablecoins while mitigating risks they could pose to users, markets, or the financial system," Ms. Yellen said in a statement.

Stablecoins are a key source of liquidity for cryptocurrency exchanges, their largest users, which need to process trades 24 hours a day. In the derivatives and decentralized finance markets, stablecoins are used by traders and speculators as collateral, and many contracts pay out in stablecoins.

Stablecoins have exploded over the past year as cryptocurrency trading has taken off. The value of the three largest stablecoins – tether, USD Coin, and Binance USD – is about $100 billion, up from about $11 billion a year ago.

2) I flew from Newark to Las Vegas last night, on my way to California this afternoon for a week of climbing (details below).

Despite the timing – I flew out at 10:30 p.m. and landed after midnight – both airports were packed! Here's what the boarding area at Newark looked like:

And there were long lines for a taxi at the Vegas airport and to check in at the Luxor – after 1 a.m.!

Leisure travel is definitely back to (or even above) pre-pandemic levels, but I still have yet to see many business travelers – the ones who provide the bulk of the profits for most airlines and hotels.

I certainly don't yearn for the darkest days of the pandemic – but it sure was nice having airports and airplanes pretty much to myself!

3) The only advantage to packed planes I can think of is that your chances of getting paid to give up your seat and take a later flight (being voluntarily "bumped") are much higher. Here's an article on How to Make the Most of an Overbooked Flight. Excerpt:

If the airline needs volunteers on your next flight, here's how you can make sure you get the most compensation possible.

First, if they need multiple volunteers, make sure you politely request that your compensation amount be the same as the final volunteer's. You don't want to volunteer at $300, only for the final person to get $1,000.

Second, don't be afraid to negotiate for other perks. Airline agents won't necessarily mention what's on the secret menu, but just like at In-N-Out, it 100% exists. You can ask for meal vouchers, hotel vouchers, access to lounges, a better routing on your replacement flight, even business class seats. Desperate airlines take desperate measures to find volunteers, especially when they need more than a few.

4) For the sixth year in a row, I'm doing some big climbs to raise money for my favorite charity, KIPP charter schools, on whose board I've served for more than two decades.

Over the past five summers, I've raised nearly half a million dollars to support the KIPPsters climbing the mountain to college by climbing five Alps giants (Mt. Blanc, the Matterhorn, Eiger, Jungfrau, and Mönch), Tre Cime di Lavaredo in the Dolomites, and The Nose of El Capitan in Yosemite (click here for pictures and descriptions of all my adventures).

On Sunday, my guide and I are going to scale Mt. Whitney in southern California, which, at 14,505 feet, is the tallest mountain in the continental U.S. This picture shows the route we'll be taking, which is one of the 50 Classic Climbs of North America: 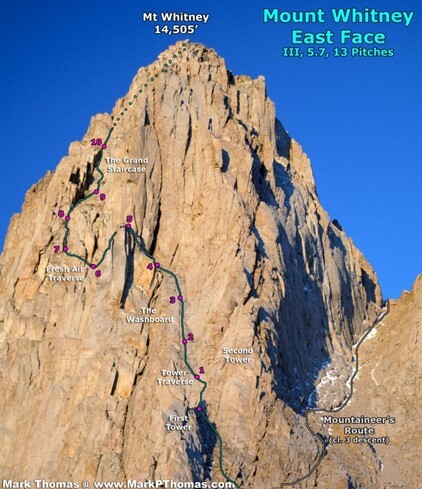 On Monday, we plan to climb the Fishhook Arete route on nearby Mt. Russell: 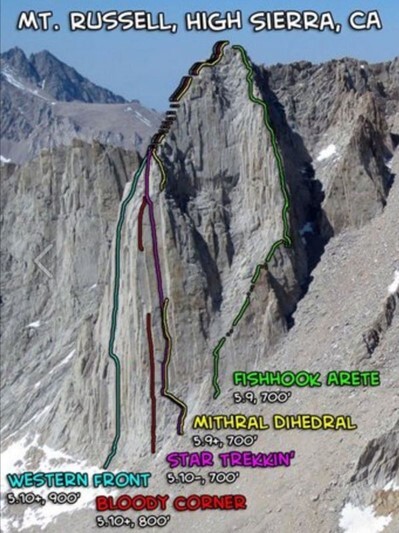 On Tuesday, we'll return to Mt. Whitney and tackle the East Buttress route: 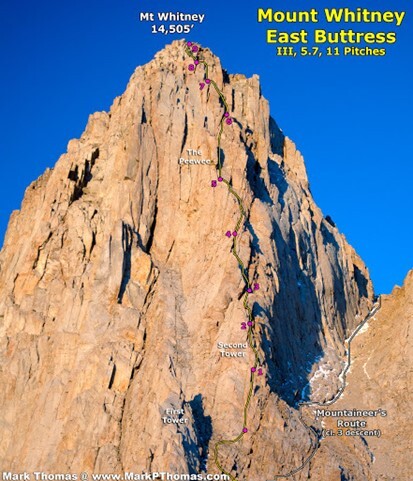 On Wednesday, we'll pack up camp, hike out, drive a few hours to the Charlotte Dome trailhead, and camp there. We'll do the long hike in on Thursday and camp, climb Friday, and hike out on Saturday.

Here are pictures of Charlotte Dome and the 12-pitch South Face route we'll be climbing (also one of the 50 Classic Climbs): 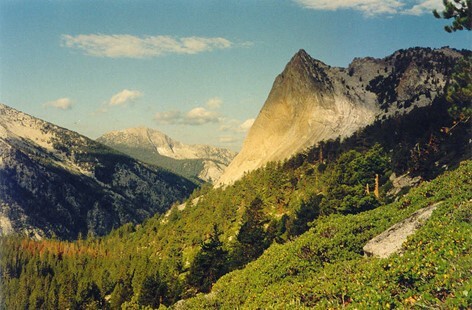 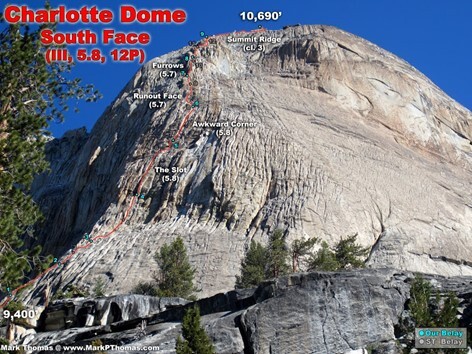 Then we drive back to Merced to pick up my wife, Susan. She's never been to Yosemite, so we're going to spend a few days there with friends from August 1 to August 4 before flying home.

I'd be very grateful if you'd support my climbs for KIPP. You can do so here.

Serving on KIPP NYC's board for more than two decades, I've seen firsthand the transformative education the schools provide, helping thousands of KIPPsters make it to and through college. It's a challenge that has become immeasurably harder during these tough times, so they need our help now more than ever. Again, here's the donation page.

P.S. Here I am wearing my KIPP shirt on the summit of my first peak, Mt. Blanc, on the Fourth of July five summers ago: 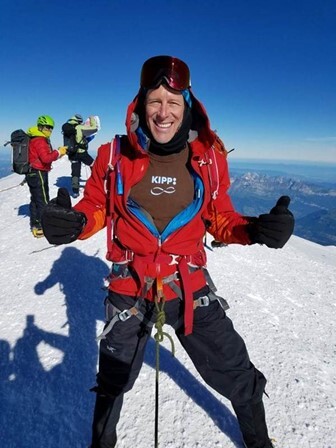 P.P.S. I welcome your feedback at [email protected].