1) My colleague Enrique Abeyta’s SPAC Investment Summit is tonight at 8 p.m. Eastern time. It’s a can’t-miss event, and it’s free to attend. Just make sure you save a spot – you can do so right here.

Yesterday, Enrique wrote about special purpose acquisition companies (“SPACs”) in Berna Barshay’s free e-letter Empire Financial Daily (which you can subscribe to here if you’re not already a reader): What the Recent Nikola Drama Means for SPACs. Excerpt:

And for the next few years, SPACs will present some of the best short- and long-term investment opportunities I’ve ever seen in my 25 years as a professional investor – including running billion-dollar hedge funds on Wall Street and my time here at Empire Financial Research.

Of course, the bubble will have its losers. And folks who are reckless will come out with scars to prove it.

But how often do you get to partner with world-class investors and get a free look at a deal before deciding whether you like it?

As long as you do your due diligence to make sure the company is great, you should be rewarded handsomely for it in the years to come.

And that due diligence is critical… You need to know which SPACs to buy and which ones to avoid (like Nikola). That’s why, at 8 p.m. Eastern time, I’m hosting a special event: the SPAC Investment Summit.

During this one-of-a-kind webinar, I’ll explain everything you need to know to successfully make money in this misunderstood corner of the market. Whitney – who has his own extensive experience as a SPAC investor – will be joining me… as well as investing legend Bill Ackman, who launched his own SPAC earlier this year.

This event is completely free to attend, but you must reserve a spot in advance. Save your seat right here.

2) It’s amazing how much money some people are making from SPACs, as this Bloomberg article highlights: A 28-Year Old Billionaire Wins the SPAC Lottery. Excerpt:

Hyliion Inc.’s 28-year-old chief executive officer, Thomas Healy, will become a paper billionaire – a fact that’s sure to capture plenty of attention – as long as the shareholders of cash shell Tortoise Acquisition Corp. vote on Monday in favor of a merger with his company.

Unlike Milton, Healy isn’t trying build an entire truck. Hyliion’s main goal is to supply hybrid and electric propulsion systems that can be slotted into various manufacturers’ existing heavy-truck models and thereby lower their emissions and the total cost of ownership…

The retail investor frenzy that propelled Tesla Inc. to a $380 billion valuation this year – and valued Nikola at $29 billion – has boosted Tortoise and Hyliion too. Hyliion encouraged the association by comparing the merits of the three companies’ technologies. 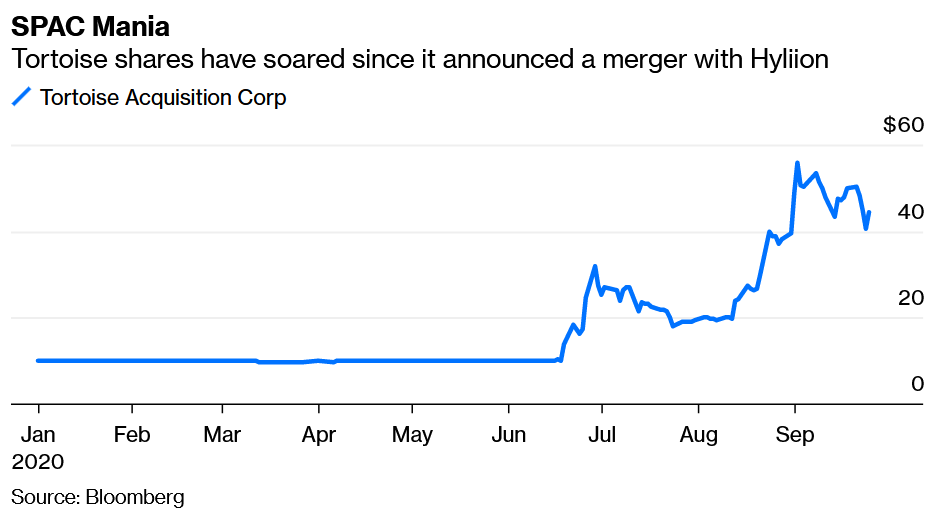 Tortoise shares have more than quadrupled in value since the merger announcement.

3) Unfortunately, SPACs have such a bad reputation that this funny meme has been circulating in the investment community: 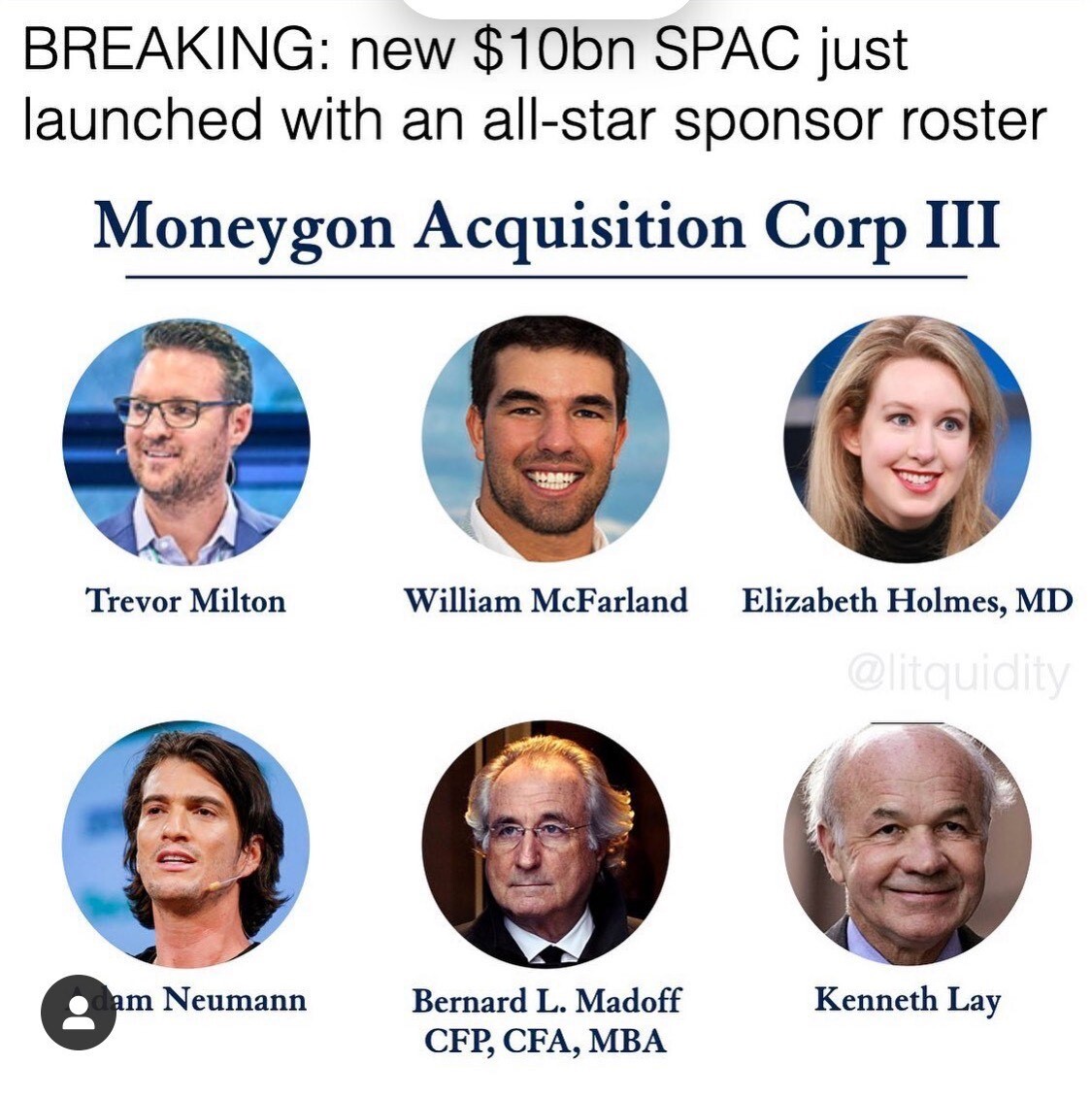 This is why you need a guide like Enrique if you’re going to invest in this sector.

There are incredible opportunities… but also a ton of fraud and hype. Enrique has more than two decades of experience, so he can help you separate the wheat from the chaff…

4) Speaking of frauds, a smart short-seller I know, who wishes to remain anonymous, just released an in-depth report on electric-vehicle (“EV”) developer Workhorse (WKHS), whose stock is up by 10 times in the past six months – giving it a $2.5 billion market cap. Here’s a summary:

In early September Hindenburg Research exposed another high-flying EV company, Nikola, as being an alleged “intricate fraud.” Nikola has since admitted to rolling a truck down a hill on purpose for a promotional video…

Workhorse on the other hand rolled one down a hill by accident due to a parking brake failure, and with that crashed their chances of ever landing the U.S. Postal Service contract.

Bulls continue to stand by the hopes that Workhorse will win the USPS contract and that win opening a door to new business and lucrative contracts. We will lay out irrevocable evidence to end any speculation that Workhorse will receive a meaningful share of the USPS Next Generation Delivery Vehicle contract. We will also show that major customers shut the door on Workhorse long ago, actually erasing any mentions of Workhorse partnerships from filings & media.

I haven’t done my own analysis of the company, but my gut tells me that this is an even bigger fraud/promotion than Nikola (NKLA)…

5) I was happy to see my favorite store, Rothmans, reopen a week ago. It’s the largest of the few remaining independent men’s clothing stores in New York City – a third-generation family business run by my friends: brothers Jim and Ken Giddon: 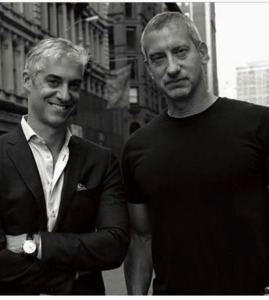 Their store was first shuttered by the pandemic, and then was looted by rioters on May 31, so it wasn’t clear it would ever reopen. But Jim and Ken embody the best of the never-give-up New York spirit!

As I said in my September 23 e-mail, I wrote about Rothmans and the importance of dressing for success in my forthcoming book, The Art of Playing Defense:

The most important factors that will determine your business and personal success are internal: are you smart, creative, hard-working, pleasant to be around, confident without being arrogant, completely reliable and trustworthy, etc.

That said, it’s a highly competitive world and many people have these characteristics, so first impressions and appearances matter.

Forgive me if some of this appears shallow – I’m not saying that this is how the world should be, but rather how it is. Why would someone trust you to take care of them – as a consultant, doctor, lawyer, money manager, etc. – if you don’t take care of yourself?

In many professions – money management is a prime example – a lot of people are obsessed with fitness or are former college athletes, so being fit helps make a great impression.

Pay up for a good haircut. If your teeth are crooked, pay a good dentist or orthodontist to fix them. As for clothing, I’m a cheapskate value guy and grew up wearing mostly second-hand clothes, so it kills me to spend, say, $150 on a button-down shirt or pair of pants when I can buy similar items for $20 at Costco. I’ve come to realize, however, that having sharp-looking clothes for professional settings is a smart investment. It really does make a difference, both externally (making a great impression) and internally (I feel more confident).

If you don’t know anything about clothing and style (I don’t), then find a store you trust. As Buffett says, “If you don’t know jewelry, know your jeweler.” Ditto for clothes. I buy most of my clothes from two places, Costco (for casual, cheap clothes I wear at home, to the gym, etc.) and Rothmans, the largest independent men’s clothing store in NYC (for nice clothes). My friend Jim Giddon is the third-generation owner of Rothmans, so if you ever shop there, tell him you’re a friend of mine and he’ll give you a nice discount.