It was an incredible day at our shorting conference today! Every speaker, without exception, was outstanding (for a summary of the ideas presented, see: Here’s What Short Sellers Presented at the Tilson Conference), but once again, Gabriel Grego of Quintessential Capital Management stole the show by exposing another company that appears to be engaging in massive fraud. At our last conference in May, it was Folli Follie, and today it was Canadian pot stock, Aphria (APHA), which started the day with a $2 billion market cap, but crashed 23% on the NYSE and 28% on the Toronto exchange (and is down another 6% after hours).

Gabriel Grego, founder of Quintessential Capital Management, told delegates at a conference in New York Monday that Aphria had diverted funds into inflated investments held by insiders. In a report he ran in conjunction with Hindenburg Research, a forensic analysis firm, Grego said the company, which had a $2 billion market capitalization last week, is worthless.

… Grego said Aphria engineered a mechanism to siphon off money to companies held by insiders in South America and the Caribbean to the detriment of shareholders, according to the report. The short seller said Aphria purchased companies in Argentina, Colombia, and Jamaica in September from Scythian Biosciences Inc., now named SOL Global Investments Corp., which had acquired them shortly before at a “significantly lower” price from three Canadian shell companies.

Here are Gabriel’s slides and here is the 49-minute video of his presentation followed by Q&A on the Kase Learning YouTube channel (be sure to subscribe for notifications when we post other videos).

Here is an article by Hindenburg Research, which collaborated with Gabriel on this research: Aphria: A Shell Game With A Cannabis Business On The Side. Summary:

The company’s response has been comical: this morning, it threatened litigation and one of the ringleaders of the scheme, Andy DeFrancesco, called himself a “goat fucker” on Twitter (among other barely literate ramblings) (see screenshot below), then at 3pm the company issued a lame, non-responsive response, which further fueled the stock’s collapse. This tells you all you need to know about the veracity of the charges… 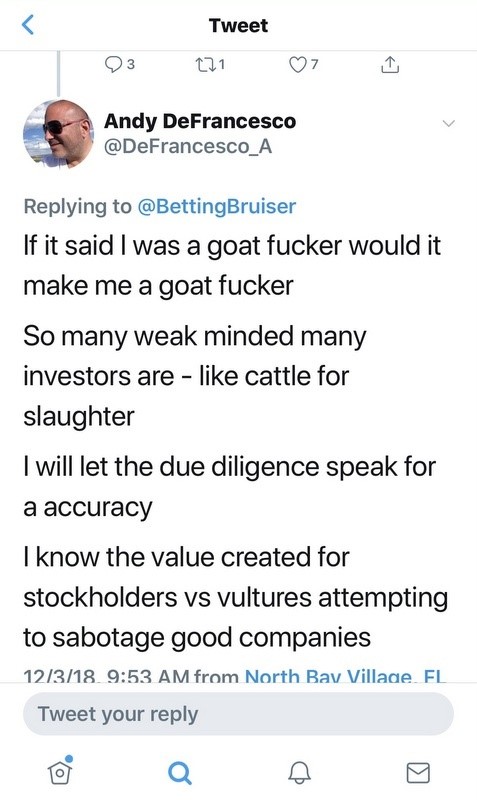