1) For the past year and a half, I've been pounding the table on the newest revolutionary technologies: electric vehicles ("EVs") and autonomous vehicles ("AVs").

While each technology is disruptive in its own right, when combined, the two will create a new and even more disruptive industry: Transportation as a Service ("TaaS"). And in the September issue of Empire Stock Investor – publishing today after the market close – my team and I have found what's likely the next big winner from the TaaS megatrend.

If you aren't already an Empire Stock Investor subscriber, click here to learn more about TaaS... as well as find out how to gain risk-free access to the latest issue when it publishes this evening.

2) The headline of this Bloomberg article surprised me, Hedge Funds Are Hot Again. Good Luck Finding One That'll Take Your Money, as I'm not seeing a boom in assets among the hedge funds I know. But upon reading the article, it's clear that only a handful of the biggest firms that are doing well. Excerpt:

Across the industry, a record 1,144 hedge funds have stopped accepting new money, the most since data tracker Preqin started compiling the information. Of twenty multi-manager firms managing more than $220 billion collectively, thirteen are no longer taking in more cash, according to Julius Baer Group. Crucially, those closures are happening at some of the biggest and sought-after firms. 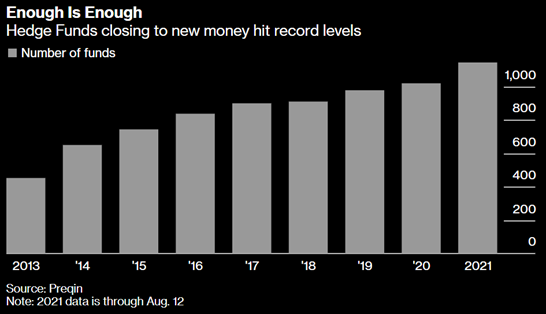 "The reality is the best performers are dictating terms," Ivan Iliev, head of alternative funds at Julius Baer, said in an interview. For investors, "the easy way of making money by buying two or three multi-manager platforms is closed," he said, referring to the practice of investing with a handful of hedge funds that give clients access to an array of strategies.

Of course, only a small fraction of the 8,000 or so hedge funds globally are in a position to be demanding. Average fees are continuing to fall for the vast majority of managers after a lengthy stretch of lackluster performance in the years following the global financial crisis, which brought an end to an earlier era of standout returns and explosive growth.

3) Here's another reason to avoid the stock of trading app Robinhood (HOOD): the U.S. Securities and Exchange Commission ("SEC") looks like it's finally going to ban the totally corrupt "payment for order flow" system that's at the heart of Robinhood's business model: The SEC head is considering banning a key way Robinhood makes money. Excerpt:

Gary Gensler, the chair of the Securities and Exchange Commission, said on Monday that a ban was "on the table" for a practice that underpins some of the most popular free stock-trading apps.

Mr. Gensler told Barron's in an interview that he would consider banning "payment for order flow" – the practice in which large trading operations pay to execute trades for clients of retail brokerage firms, such as Robinhood.

The arrangement is central to the way Robinhood and some of its competitors, including E-Trade and Charles Schwab (SCHW), have organized their businesses to offer commission-free trades – a crucial factor in the rush of millions of everyday people into the stock market...

Banning it would be a welcome development, said David Lauer, the chief executive of the data analytics firm Urvin.ai and a former high-frequency stock trader.

"It is an intractable conflict of interest," he said. "The brokers cannot get around it."

But, he said, ending the practice wouldn't necessarily spell the end of free stock trades: Firms such as Fidelity already offer free trading without employing the payment-for-order-flow system.

4) If I were president, I wouldn't be pushing for this – it's a bit too paternalistic and heavy-handed in my opinion: China Tightens Limits for Young Online Gamers and Bans School Night Play. Excerpt:

China's strict limits on how long minors can play online video games just got stricter. Chinese children and teenagers are barred from online gaming on school days, and limited to one hour a day on weekend and holiday evenings, under government rules issued Monday.

The rules, released by the National Press and Publication Administration, tightened restrictions from 2019 aimed at what the government said was a growing scourge of online game addiction among schoolchildren. Under the old rules, players under the age of 18 were limited to no more than 90 minutes of gaming on weekdays and three hours a day on weekend.

Parents had complained that was too generous and had been laxly enforced, the administration said. The new rule sets the permitted gameplay hour to 8 to 9 p.m. on Fridays, Saturdays, and Sundays. The government said it would step up inspections to ensure that gaming companies were enforcing the restrictions.

"Recently many parents have reported that game addiction among some youths and children is seriously harming their normal study, life and mental and physical health," the administration said in an online question-and-answer explanation about the new rules. Parents, it said, had demanded "further restrictions and reductions in the time provided for minors by online gaming services."

The new rules also reflect the government's intensifying push for companies to jettison what the Chinese Communist Party says are unhealthy influences, especially among teenagers and children.

(I sent this yesterday to my China e-mail list – to subscribe, simply send a blank e-mail to: [email protected].)

That said, as a parent, I wholeheartedly endorse putting strict limits on children (and, as an adult, exercising a lot of self-control) when it comes to brain-numbing, time-wasting activities like video games, social media, and binge-watching shows, as I discuss in my book, The Art of Playing Defense:

Spending a lot of hours in the office or library isn't worth much if you're constantly distracted, which is increasingly common.

I'll admit to being very prone to distractions. As a kid, I loved video games – even the primitive ones like Space Invaders, Asteroids, Defender, and Donkey Kong. I remember one year in high school when I memorized the patterns for every level of Pac-Man so I could play for hours for only a quarter – I shudder to think of how much time I wasted, sitting there alone like a zombie. After college, I binge-played Risk on the computers at Boston Consulting Group when I should have been doing work.

It's a constant struggle for me to rein in these distractions – and it's getting exponentially harder. Staying on track and focused is a bigger challenge today than at any time in history thanks to these three notorious time-killers:

Our smartphones are the single-most pernicious distraction in society today. They beep and buzz constantly with updates, text messages, and e-mails, making it a real challenge to get any work done. It even cost one woman I know of her job.

A business-owner friend of mine employs two dozen people to package and ship products from his warehouse in Dallas. One of these workers, a young woman in her twenties, was constantly checking her phone. Exasperated, my friend asked her to put it away.

"Well," she replied, clearly annoyed, "I do have a personal life."

Ten minutes later, she pulled it out again.

My friend just pointed to the nearest exit and said, "There's the door. Get out. You're fired."

Smartphones are highly addictive, and I suspect this young woman is symbolic of a wider problem. Our brains have become used to the constant stimulation our smartphones give us, and we're now like rats in a science experiment, mindlessly checking our phones over and over throughout the day and getting little hits of dopamine every time to satisfy our craving.

Not too long ago, there were only a dozen channels on TV, and you had to watch when a show aired or miss it forever. But today, streaming video services like Netflix (NFLX) and YouTube have not only killed rental chains like Blockbuster and impacted traditional television but also ushered in an era in which an unlimited amount of video entertainment is only a few swipes or clicks away. And it's not all schlock. In many ways, we're in a golden era of television, with thousands of hours of tremendously compelling content like The Sopranos, The Wire, Breaking Bad, Friday Night Lights, and Game of Thrones available at low cost.

It's so easy to get hooked on one or more of these shows (I speak from personal experience) and waste ungodly amounts of time!

Modern video games like Fortnite, Minecraft, Red Dead Redemption, Grand Theft Auto, and Call of Duty are wildly addictive, with their immersive plots and amazing graphics. Plus, you can play with friends (or strangers) all over the world. According to the Entertainment Software Association, more than 150 million Americans play video games (more than half of our adult population), wasting an average of six hours per week. 60% of Americans play video games daily.

I'm not one of them; ever since I broke my addiction to Risk at age 24, I've deliberately never played them because I know how addicted I became to the primitive games of my youth, so I can't imagine what would happen if I started playing these vastly superior games!

If you want to be successful, you need to make a conscious effort to reduce the distractions in your life.