S&P 500 return over the past and next decade; Tech and FAANG stocks; At SoftBank's Jewel in India: 'Toxic' Culture and Troubling Incidents; Former Wells Fargo execs may face criminal charges in coming weeks; The 12 questions to ask before you marry someone

1) Analysts at Credit Suisse collected some interesting data about the past decade in a report entitled “Those Crazy Teen Years.” Over the decade, the S&P 500 Index compounded at 13.6%, after being negative over the prior decade. The chart below shows the five factors that drove the return: Revenue, margin, buybacks, the price-to-earnings (P/E) ratio, and dividends. 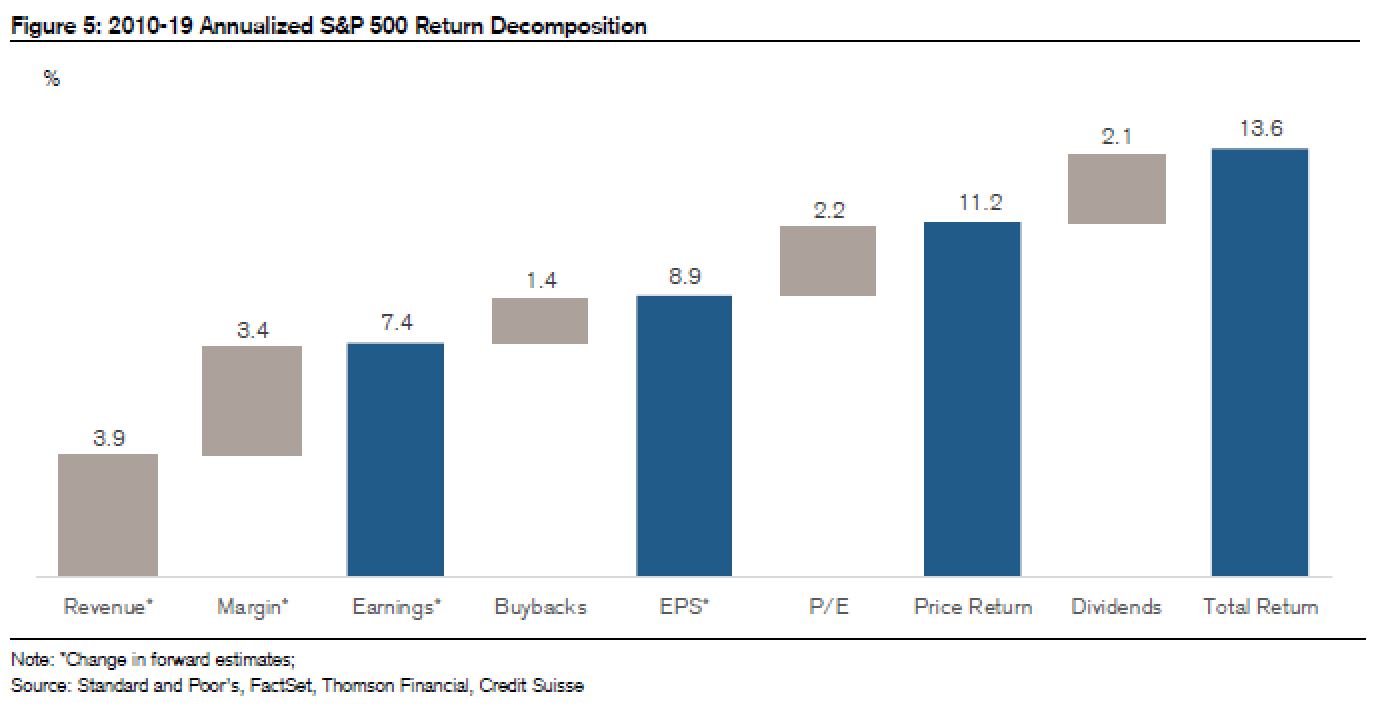 And this chart shows how much the tech sector – and the five FAANG stocks in particular – outperformed the broad market: 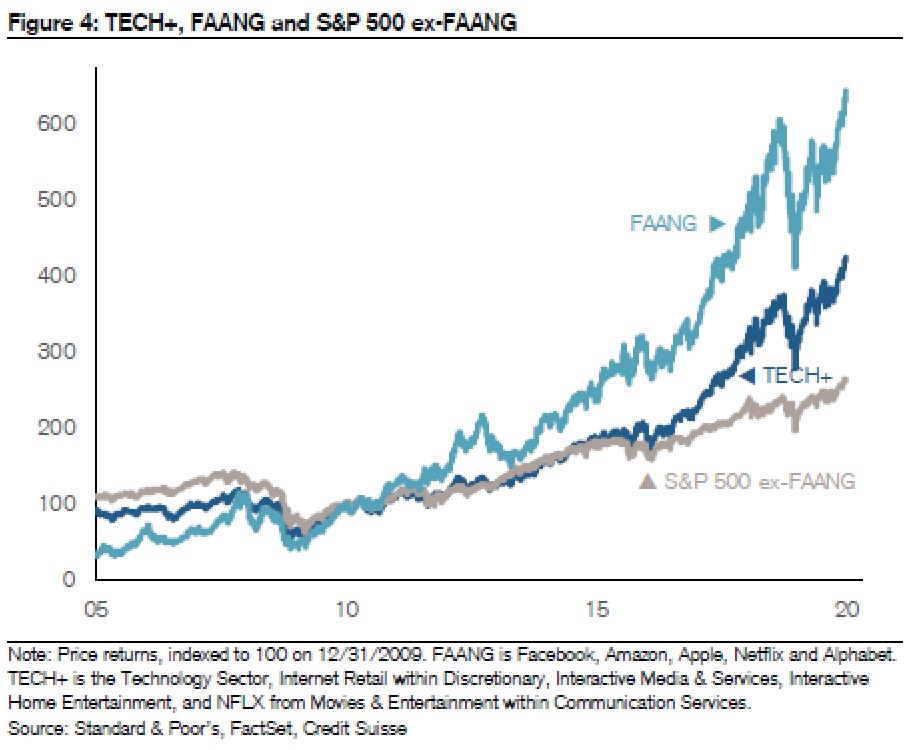 This was driven by both exceptional revenue and margin growth, as these two charts show: 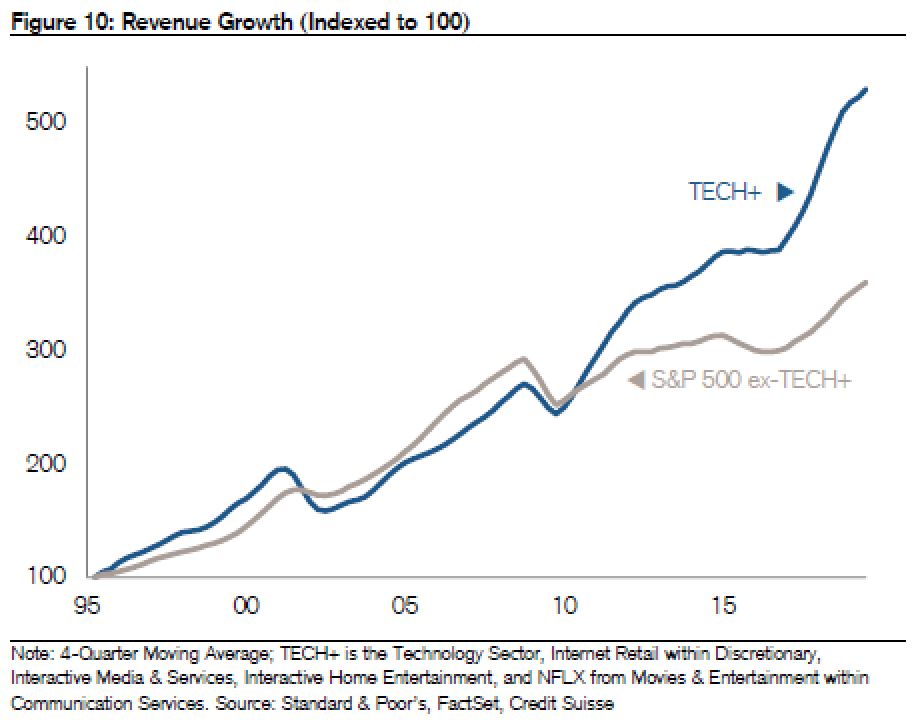 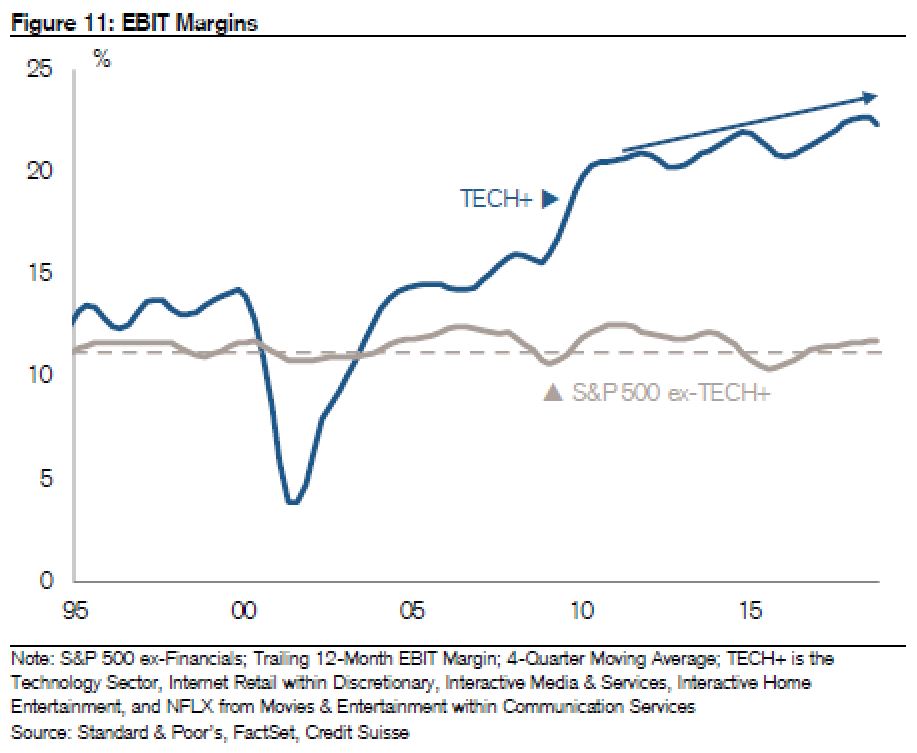 The first chart is a helpful framework for thinking about what the S&P 500 might return in the coming decade, and the last two charts indicate that we should have modest expectations for revenue and margin growth going forward – since it’s highly unlikely that tech stocks will be such a driver of outperformance for another decade.

If I were to hazard some guesses, I’d say that revenue growth results in 3.0% compounding for the S&P 500 over the next decade (down somewhat from 3.9% last decade), margins and P/E multiples remain flat (at best), and buybacks and dividends remain constant at 1.4% and 2.1% contributors, respectively. This would result in the S&P 500 compounding at 6.5% annually.

That’s decent – it would almost certainly beat the return on bonds by a wide margin – but it would be less than half of the growth rate of the past decade, so investors should adjust their expectations accordingly…

2) This is good to see: Former Wells Fargo execs may face criminal charges in coming weeks. Companies laugh off fines – only criminal indictments against high-level executives will change behavior. Excerpt:

Multiple former high-level Wells Fargo executives are under criminal investigation in connection with the bank’s fake-accounts scandal and could be indicted as soon as this month.

Federal prosecutors have been eyeing potential charges against individuals who were once in the San Francisco bank’s upper management ranks, according to sources familiar with the situation. Until this point, the scandal’s repercussions have fallen most heavily on lower-level employees, thousands of whom were fired, though some high-level executives have also lost their jobs and had compensation clawed back.

In September 2016, Wells Fargo agreed to pay $185 million in fines to the Consumer Financial Protection Bureau, the Office of the Comptroller of the Currency and the Los Angeles City Attorney’s office in connection with the more than 2 million customer accounts that had been flagged as potentially unauthorized.

Oyo, a start-up that offers budget hotel rooms, has grown into one of India’s most valuable private companies and aims to be the world’s largest hotel chain by 2023.

But at least part of Oyo’s rise in India was built on practices that raise questions about the health of its business, according to financial filings, court documents and interviews with 20 current and former employees, as well as others familiar with the start-up’s operations. Many spoke on the condition of anonymity for fear of retaliation from the company.

Oyo offers rooms from unavailable hotels, such as those that have left its service, according to the company’s chief executive and nine of the current and former employees. That has the effect of inflating the number of rooms listed on Oyo’s site.

Thousands of the rooms are from unlicensed hotels and guesthouses, its executives have acknowledged. To deter trouble from the authorities over the illegal rooms, Oyo sometimes gives free lodging to the police and other officials, according to nine of the current and former employees and internal WhatsApp messages viewed by the New York Times.

Oyo has also imposed extra fees on hotels and declined to pay the hotels the full amounts they claimed they were owed, according to interviews with hotel owners and employees, emails, legal complaints and other documents viewed by The Times. Some hotel operators have sought to file criminal complaints against Oyo, which said it withheld payments primarily over the hotels’ customer service issues.

“It’s a bubble that will burst,” said Saurabh Mukhopadhyay, a former Oyo operations manager in northern India who left the company in September.

This was Scott Galloway’s take on Oyo from a blog post last October:

OYO feels like the WeWork of budget hotels with red flags the size of Days Inns. A 25-year-old founder and SoftBank is a toxic mix. Yes, the Zuck and Bill Gates founded their firms at the same age, but it’s a bad strategy to assume your CEO is the next Zuck/Gates. Founders buying additional shares is a good sign, unless you are 25 and borrowing against your existing shares to buy more. That means he’s hugely committed and immature.

Lightspeed and Sequoia also have too much capital and are under pressure to deploy additional money in portfolio firms where they’ve negotiated pro-rata investment rights for subsequent rounds. With OYO, they not only passed, but having the full inside information and observing the CEO, they’ve decided to sell shares. Customer feedback is awful, and customer acquisition does not appear to be scaling. Here. We. Go.

4) Here’s a summary of the 12 questions to ask before you marry someone (see the Empire Financial Daily archive for my comments on each):