I've chosen to discuss this issue in my daily e-mails in part because I cover things I care about... and – perhaps because I have three daughters – this definitely qualifies.

Judge [Cormac] Carney also seemed contemptuous of Visa's arguments that it was an innocent party and should not be implicated:

I'll give you one more fact – one that should shock the conscience of every decent American. After Kristof's report, Visa temporarily suspended its business with MindGeek, and MindGeek responded by removing "over 10 million unverified videos from its [sites], constituting over 80% of its content."

Sit with that for a moment. Over 80% of MindGeek's content was suspect enough to remove.

I was successful in reaching the CEO of MC who took my concern seriously. Within 5 days, MC had shut down the site. Five days later Visa followed suit. Within a day or so, MindGeek removed >10m illegal videos, 80% of its content.

Instead, they continued to allow their cards to be used for B2B business, that is, the purchase of ads on these same tube sites and for subscriptions to "premium" content, together about 90% of the business. Hours later, MindGeek began restoring its illegal content library.

The only age verification MindGeek now uses before accepting a video is checking the ID and age of the uploader, often the perpetrator of the crime.

In its defense, Visa claims it has no liability, protested that the payments industry would collapse if it did, and attempted to dismiss the suit taking comfort in its statement, "Maintaining a neutral stance under the law is vital for the free flow of commerce."

The judge, in a carefully reasoned decision, disagrees:

Moreover, Visa allegedly had considerable sway over that business's decision-making, a conclusion amply supported by [the] allegation that MindGeek removed 80% of its content when Visa suspended its business with MindGeek.

Visa is not being asked to police the billions of individual transactions it processes each year. [Visa's argument] It is simply being asked to refrain from offering the tool with which a known alleged criminal entity performs its crimes. That is not a tall order and does not spell out an existential threat to the financial industry.

Visa is a Delaware Corp. and Caremark liability applies. In short, directors can be held personally liable if the company's product or service causes harm and the board has provided inadequate oversight to monitor the potential for harm. The harm here is enormous.

The TVPRA [The Trafficking Victims Protection Reauthorization Act of 2008] Federal criminal child sex trafficking statute applies to "whoever knowingly benefits, financially or by receiving anything of value, from participation in a venture which has engaged in [child sex trafficking]" or anyone who conspires with any such person.

Alfred Kelly, Visa's CEO, waxes eloquent in his annual letter about Visa's "noble" purpose, commitment to an "inclusive economy" and "economic opportunity for all." He then trumpets the hiring of a Chief Diversity Officer in May 2021 reporting directly to him.

Mr. Kelly should know that the majority of child trafficking victims are from lower-income families including Black and Brown families. I would recommend that Visa's board, and separately Mr. Kelly, should hire independent white collar and criminal counsel.

My take: Cheers to Kristof and Ackman, and jeers to MindGeek and its enablers, Visa and Mastercard!

2) Another story I've been following closely is Elon Musk's attempt to weasel his way out of acquiring Twitter (TWTR) for $54.20 per share, as he agreed to do earlier this year. (Click here for a PDF of my previous writings about this.)

On Friday, Musk filed a 164-page countersuit, but it hasn't been made public yet. In a Twitter thread, user PlainSite explains what's going on:

It's not under seal. It's a confidential filing. There's a difference. Delaware does this a lot.

Here's what is going to happen. Next week-ish a Public Version will be posted to the docket. It will have a bunch of redactions. They will probably be related to Twitter's confidential methodology of handling fake accounts, as Elon is doubling down on his losing strategy.

Elon and his proxies... have already made clear that they think airing Twitter's procedure for managing fake accounts is a brilliant strategy. So Musk actually wants this stuff in the open, but he's contractually obligated not to make it public.

Could $TWTR do a better job with managing account safety? Absolutely. No one is going to argue with that. But it's a completely different problem and one that has absolutely nothing to do with the fact that Elon Musk signed a contract to buy Twitter, Inc. at $54.20 per share.

3) On Friday, I wrapped up my five-day, 1,100-mile trip in southern Oregon and northern California...

I started in Eugene (G on the map below), visited Crater Lake National Park (A) on Monday, climbed Mount Shasta (B) on Tuesday, visited Lassen Volcanic National Park (C and D) on Wednesday, saw the magnificent redwood trees in Redwood National and State Parks (E) on Thursday and Friday, and then drove up the scenic Oregon coast (F) back to Eugene. From there, I caught an evening flight to San Francisco, where I spent the weekend seeing family and friends before flying home today. 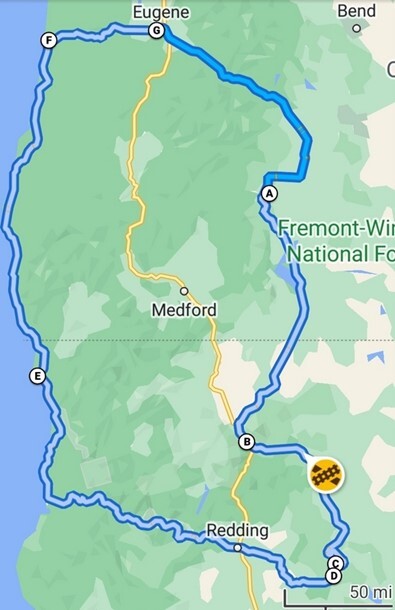 Below are some pictures from Friday, which started with a very cool drive winding through the redwood trees (video here) to the trailhead of a five-mile round-trip hike to see the remarkable Boy Scout Tree, which is two trees fused together with a combined width of 23 feet.

I then drove another few minutes and walked the 1.5-mile Stout Grove Loop Trail, which had more beautiful redwoods, plus a quick diversion to a river where I took a refreshing dip.

I then drove five hours along the coast back to Eugene, stopping occasionally to take pictures of the stunning coastline. 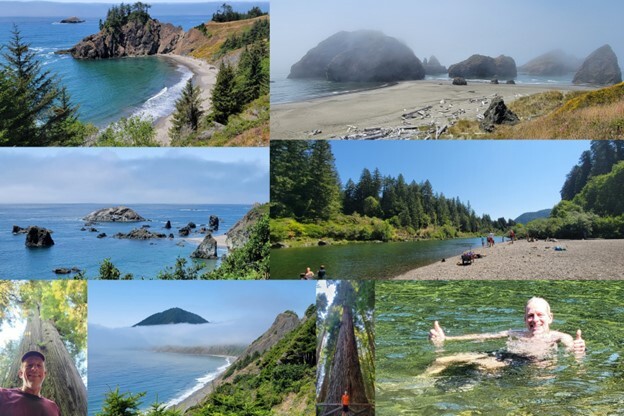