1) I wanted to share some advice I gave to a reader who wrote:

"I don't have any income other than Social Security and have a very, very small stash. I would like to try investing in something that might give me a return. With my knowledge (zippo) and a tiny amount of money, is anything possible?" – Ann A.

I would strongly caution you against trying to get rich quickly – it's the surest way to get poor quickly.

There is no shortage of schemes out there seeking to separate you from your money, so be careful.

I generally advise people not to put any money into stocks that they might need in the next three years.

If you have any such long-term money, an S&P 500 Index fund is a good option.

If you want to pick a few stocks, however, we have a low-cost newsletter (only $49 for the first year), Empire Stock Investor, in which each month we recommended stocks we'd put in our parents' retirement accounts. You can sign up for it here.

In your June 2 e-mail, you gave your list of "Turds" and said how they would collapse. I bought a $30 September put for AMC. In mid- to late August, I lost confidence in your recommendation. I sold it for a $900 loss (about 50%). Before I sold it, I asked what your updated thoughts were on shorting AMC. I never received a response. Last week it was selling for $3. I guess I should be happy I only lost 50%.

I named 10 turds – nine are down by double-digits in a +7% market – and the average decline is 20%. Alas, the only one that's gone up is AMC Entertainment (AMC). Here's the data: 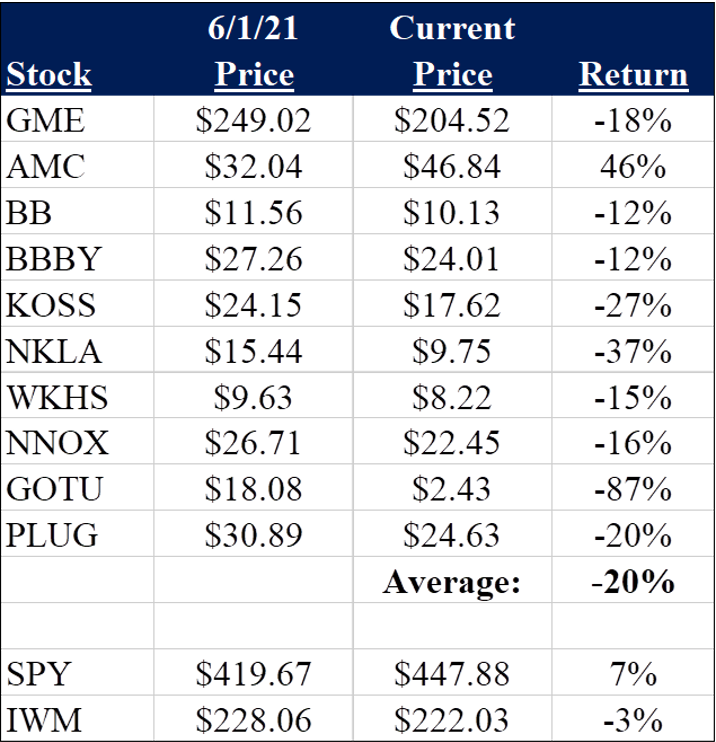 Lesson: When shorting, you need a basket approach.

3) Speaking of my readers, Susan and I are having dinner tonight with one (and his wife) in Bigfoot, Montana, after a long day of sightseeing and hiking in the magnificent Glacier National Park. And another reader is hosting us at his home on Lake Washington in Seattle on Sunday before I fly home on Monday. (Susan is staying the week with a friend.)

4) Yesterday, I sent my Tesla (TSLA) e-mail list with an insightful debate about the company's European market share between my analyst Kevin DeCamp, a long-time bull on the stock (who's made nearly 100 times his money on it), and a friend who's bearish. You can read it here. And if you wish to be added to this list, simply send a blank e-mail to: [email protected].

I think the high valuation is the only bear thesis left.

The rest of the industry is shrinking overall and growing in a very small segment ("EVs") from a very small base – ZERO – where they haven't even proven they can be profitable nor make a viable product (see the GM Bolt debacle).

Tesla will grow around 70% this year and doesn't have any legacy baggage. Not to mention Tesla's software, energy, and AI optionality. Only time will tell who's right on valuation, but I think the market is reflecting what's obvious...

My view hasn't changed since I told anyone short the stock to exit/cover nearly two years ago in my October 24, 2019 e-mail, after the company reported a surprise third-quarter profit:

I am neutral on the stock. I think it's a terrible long, but probably also not a good short right now, either.

Elon Musk's SpaceX on Wednesday evening launched four civilians toward the deepest orbit Americans have traveled to in more than a decade in another milestone flight for private space travel.

A Falcon 9 rocket with a Crew Dragon space capsule on top lifted off with a fiery plume from a pad at Kennedy Space Center in Florida just after 8 p.m. Eastern Daylight Time, according to a live stream of the takeoff...

The space flight Wednesday marks new terrain for a commercial space industry that has attracted entrepreneurs and investors who are betting on an expanding set of business opportunities beyond Earth.

For the first time, an all-civilian crew is traveling to orbit on a mission arranged entirely by private parties. Jared Isaacman, the billionaire founder of payments-processing company Shift4 Payments Inc., purchased the trip for an undisclosed sum from SpaceX and is commanding the mission. Previous travelers to orbit had to secure seats on Russian government-controlled rockets to venture that deep into space.

Three people joined Mr. Isaacman on the flight, which has a charitable component. They are Dr. Sian Proctor, a geoscientist and science communicator; Hayley Arceneaux, a cancer survivor who now works as a physician assistant; and Chris Sembroski, an Air Force veteran and aerospace industry employee.

I'm looking forward to watching the Netflix (NFLX) documentary about this, Countdown: Inspiration4 Mission To Space. You can watch the trailer for it here.

6) I am once again co-hosting the 11th annual Take 'em to School Charity Poker Tournament at Gotham Hall in New York City two weeks from today on Thursday, Sept. 30, at 6:00 p.m. The event is almost at capacity, but there are still some tables and tickets available for poker players and cocktail guests – you can sign up here: https://takeemtoschool.org. I hope you can make it!

The event will benefit Education Reform Now, a nonprofit organization, which I co-founded, that's committed to ensuring all children have access to a high-quality public education. In particular, because of COVID-19, children in poverty have lost almost a year of learning. Your generous support allows us to address this generational crisis. Thanks to the generosity of one of our donors, all proceeds from this year's event will be matched dollar for dollar.

This year's event will feature poker players battling for prizes that in past years have included two courtside tickets to a Milwaukee Bucks home game with the owner, Marc Lasry (with private air transportation to the game), a Sebonack golf trip with a one-night cottage stay, a table at Rao's, power lunches with some of the world's top investors, and a set visit for The Walking Dead.

For those attending as cocktail guests, there will be a variety of casino games and entertainment.

Here are pictures from the event in past years: 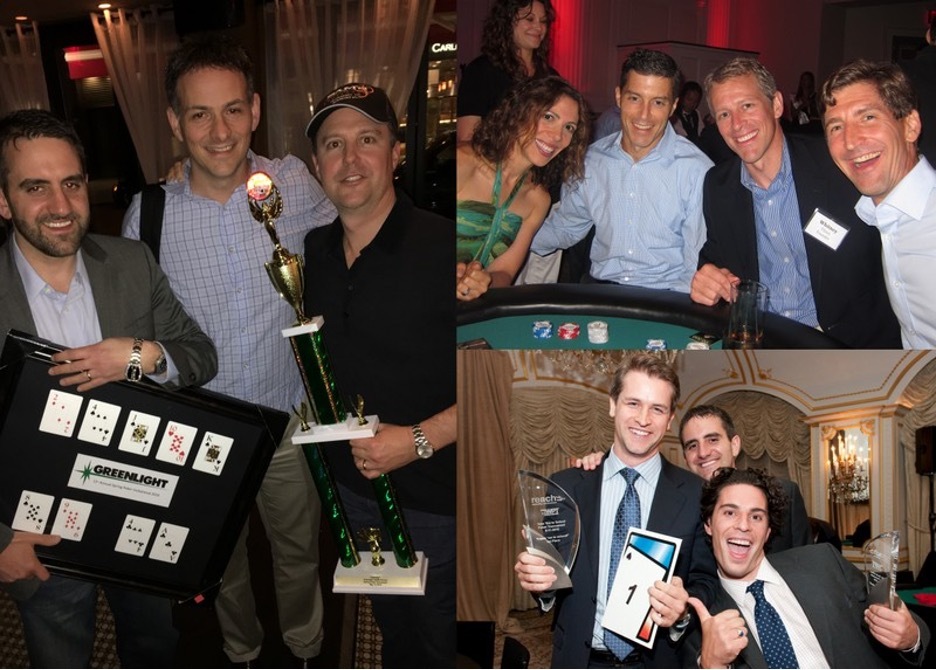