Ray Dalio Is Still Driving His $160 Billion Hedge-Fund Machine; Dalio's response; Bitcoin Has Lost Steam. But Criminals Still Love It; The Woman Shaking Up the Diamond Industry; Greetings from Zanzibar

1) The hedge-fund industry is filled with larger-than-life characters whose fortunes are matched only by their egos. Exhibit A is Ray Dalio, the founder of the world’s largest hedge fund, Bridgewater, and the author of Principles: Life and Work (which a lot of people love… but honestly, the book didn’t do it for me).

The Wall Street Journal published a fairly snarky article last week about how Dalio has been talking about stepping back from his firm, but seems unwilling or unable to do so: Ray Dalio Is Still Driving His $160 Billion Hedge-Fund Machine. Excerpt:

Mr. Dalio – who is co-chairman and co-chief investment officer – at age 70 isn’t giving up real control over the business that helped him amass a $19 billion fortune. His word nearly always wins out in debates at Bridgewater on topics from management, staffing and investments to compensation, personnel and the wisdom of meeting with an autocratic head of state, say current and former employees…

Several years ago, Mr. Dalio arranged a conversation with Russian President Vladimir Putin to discuss economic policy, said some of these employees. Employees expressed concerns about engaging with the autocratic leader, and Mr. Dalio told one that “if you’re so smart, why aren’t you rich?” according to people who heard the comment.

Mr. Dalio overruled the dissenters. Indeed, Mr. Dalio went on to meet with Mr. Putin several times in person, one of the people said. Other employees believed Mr. Dalio was right to discuss economic policies with Mr. Putin.

I’m sure you will be shocked – shocked! – to learn that Dalio didn’t take too kindly to the article, and posted this response: The Wall Street Journal’s Fake and Distorted News. Excerpt:

Because this case is about me and about what’s going on at Bridgewater, because it is loaded with factual errors, and because it exemplifies the failure of too many writers and publishers in media to produce truth, I will describe what really happened so that you will understand.

The two writers of this article – Rob Copeland and Rachael Levy – had a goal and story in mind long before there were any facts. They are investigative journalists that The Wall Street Journal hires to dig up dirt on successful people and companies and to write negative articles about them. The Wall Street Journal and other publications don’t have investigative journalists write complimentary articles on people because those articles don’t sell, which is why our country has no heroes (read my thoughts about this in my recent LinkedIn post). This case is especially interesting because one of the writers – Rob Copeland – had previously interviewed at Bridgewater and wasn’t hired because he wasn’t up to doing the job.

2) Returning to one of my favorite topics… You’d think that by now – after all these years and endless hype – if cryptocurrencies had any legitimate use, we’d see at least the glimmers of it in some country or industry as a currency. But no…

As best I can tell, cryptos are only used for two things: 95% as instruments of speculation (and scamming gullible individual investors around the world) and 5% for criminal activities, as this New York Times article by Nathaniel Popper notes: Bitcoin Has Lost Steam. But Criminals Still Love It. Excerpt:

The last few months have not been good for Bitcoin. The value of the digital tokens has steadily dropped. Bitcoin trading on cryptocurrency exchanges has slowed. And using Bitcoin to buy legal items? That has also dropped.

But one corner of the Bitcoin economy is still going strong: the sale of illegal drugs and other types of lawbreaking.

The amount of cryptocurrency spent on so-called dark net markets, where stolen credit card information and a wide array of illegal drugs can be purchased with Bitcoin, rose 60% to reach a new high of $601 million in the last three months of 2019, according to data released Tuesday by Chainalysis, a firm that tracks every Bitcoin transaction and serves as an adviser to an array of government authorities.

The continuing growth of illegal transactions underscores the difficulties that Bitcoin has had in moving past its reputation as a refuge for scoundrels, even as Wall Street institutions have begun buying and selling the digital tokens.

The enduring success of Bitcoin-fueled illegal activity also points to the struggles that the authorities have faced in containing the new kinds of bad behavior that cryptocurrencies have helped enable.

Bitcoin played a crucial role in the recent growth of so-called ransomware attacks, in which hackers steal or encrypt computer files and refuse to give them back unless a Bitcoin payment is made.

Bitcoin is still popular among currency speculators, and illicit activity accounts for only 1% of all Bitcoin transactions. But that nearly doubled from the previous year. Illegal activity appeared to be one of the few parts of the Bitcoin economy impervious to changes in price, according to Chainalysis’s new Crypto Crime Report.

By the way, Popper is the author of the excellent book, Digital Gold: Bitcoin and the Inside Story of the Misfits and Millionaires Trying to Reinvent Money.

3) I’m in Africa right now, so I especially enjoyed and learned a lot from this in-depth New Yorker article, The Woman Shaking Up the Diamond Industry. It tells the story of two female Canadian mining executives who co-founded a company named Lucara Diamond (LUC.TO), which owns one of the most lucrative diamond mines of all time in Botswana. (The stock is at a seven-year low – it might be worth a look for those interested in this kind of thing…) Excerpt:

Diamonds may not be as scarce as the industry would have people believe, but very large rough diamonds are vanishingly rare – except at one mine. Lucara has operated at Karowe for seven years, and during that time the firm has discovered an astonishing number of big stones, including three of the 10 largest rough diamonds in history, and 15 stones weighing more than 300 carats. Since the discovery of the Cullinan, in 1905, Karowe is the only place where stones heavier than 1,000 carats have been found. In 2015, Lucara recovered a near-pristine white diamond of 1,109 carats, which became known as the Lesedi La Rona – “Our Light,” in Setswana. The big black-covered diamond found by Otsogile Metseyabeng last April is now known as the Sewelô, which means “A Rare Find.” The price of a diamond increases exponentially as its weight rises, because of the scarcity of big stones. Lucara’s streak has made the company profitable at a time when many producers have struggled. It has also reshaped the diamond industry.

Lucara was founded in 2009 by two Canadian mining executives, Eira Thomas and her friend Catherine McLeod-Seltzer, together with the Swedish-Canadian mining billionaire Lukas Lundin, who serves as the firm’s chairman. At the time, both women were already thriving in a male-dominated sector. McLeod-Seltzer was one of the first female CEOs in the mining industry. She had created and led several successful gold- and copper-mining ventures, particularly in South America, and was known for her expertise in raising funds. The Northern Miner, a trade magazine, named her a 1999 “Mining Man of the Year,” apparently without irony. Lucara is made in the image of its founders: most of its leadership team, and more than half its executives, in Botswana and outside the country, are women.

Eira Thomas, who is now Lucara’s CEO, has been prospecting since she was a child. Now 51 years old, with reddish hair, catlike features, and blue eyes, she has the sort of calm demeanor that one associates with oceangoing naval captains.

4) This morning, we flew in my dad’s little Cessna 182 (he’s been a private pilot since 1959!) to the magnificent island of Zanzibar, 15 miles off the coast of Tanzania. It was once the center of trade in spices, ivory, and slaves between Africa and the Arab world (you can read about its history here). It was my first visit since I was backpacking through Africa in 1992. Not much has changed!

Here are pictures of us just before we took off from the grass airstrip at a tea plantation near my parents’ house outside of Nairobi (here’s a video of the takeoff)… a picture of the island from the air… our hotel, Emerson Spice… and a fort in the historic Stone Town: 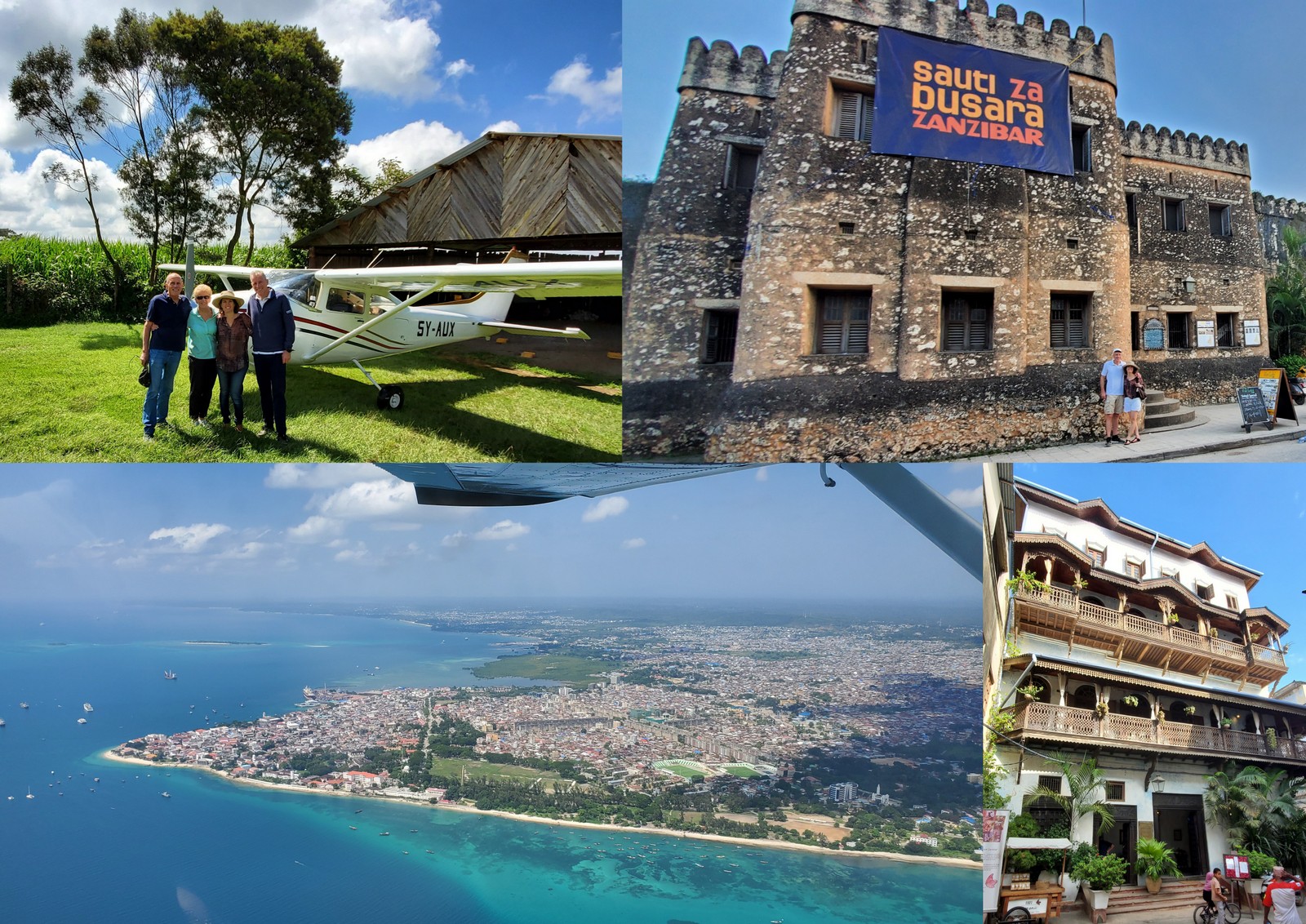