1) The headlines are filled with stories like this one from today's Wall Street Journal: Rate Squeeze Punishes Once-Triumphant Tech Stocks. Excerpt:

Shares of the largest U.S. technology firms have fallen out of favor in the most pronounced way since the 2000 tech bubble, victims of a shift in investors' tastes inspired by rising interest rates.

The 2022 market bust has turned the popular "FAANG trade" – the practice of buying fast-growing technology titans such as Facebook owner Meta Platforms (META), Apple (AAPL), Amazon (AMZN), Netflix (NFLX), and Google parent Alphabet (GOOGL) – into a pumpkin. Of those five companies, only Apple, down 12% this year, has outpaced the Nasdaq Composite Index's 29% decline.

For years, portfolio managers were willing to overlook the occasional blemish in the tech giants' quarterly results, reasoning that there were few alternatives at a time of generally slow economic expansion. That sort of patience has evaporated this year, as investors in Meta in particular can attest following the past week's earnings-driven rout.

"There was rampant speculation in the sector," said Rupal Bhansali, chief investment officer and portfolio manager of global equity strategies at Ariel Investments. With rising rates, "people come back to their senses and realize we need to be more circumspect." 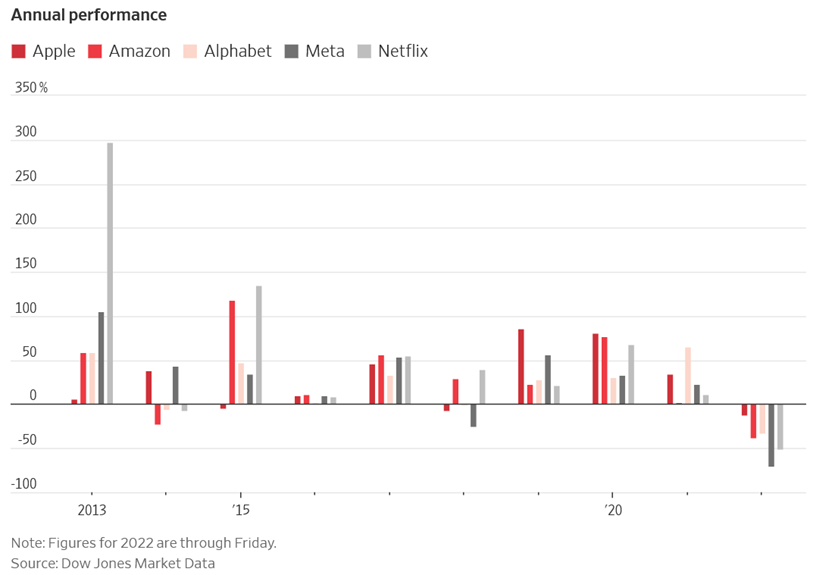 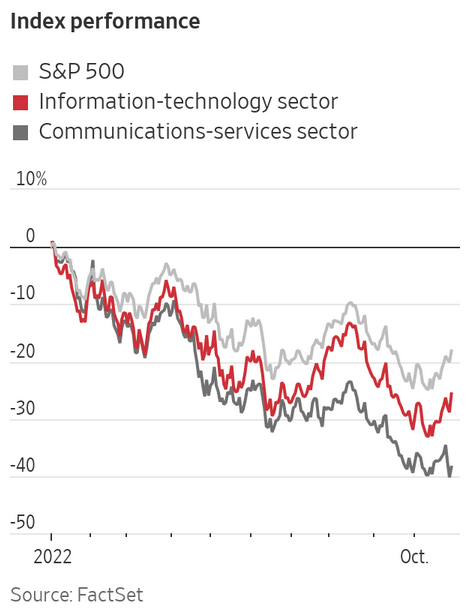 Mark my words: GOOGL, AMZN, and META shares all around $100 are absolute gifts!

To understand why I believe this, let me start by repeating what long-term readers might remember...

I no longer consider myself a value investor... But I'm not a growth investor either. Instead, I try to combine the best of both styles of investing to become a make-money investor.

The dream setup for a make-money investor is to buy a growth company at a value price.

This usually happens in three situations: the market has crashed (think of the incredible bargains available to investors with nerves of steel in March 2009 or March 2020)... a sector has fallen deeply out of favor (e.g., cannabis or, as the article above notes, tech stocks today)... or a stock has gotten clobbered because of company-specific issues.

The biggest sell-offs occur when all three factors happen at once, which is the situation today with Meta Platforms. The stock, the company, and CEO Mark Zuckerberg are universally reviled, which is reflected in the stock price... It's down a staggering 71% this year – wiping out $631 billion of market capitalization.

Many stocks like this are value traps – they appear cheap, but the business continues to deteriorate and the stock sinks into oblivion. That's what's happened over the last decade – accelerating rapidly in the past year – with retailer Bed Bath & Beyond (BBBY), which is why I've warned my readers many times to avoid the stock at all costs.

But sometimes those that have fallen return to glory... Some of my most successful investments ever – a triple in a year on JetBlue (JBLU), a five-bagger in five years with McDonald's (MCD), a 17-bagger in a year with General Growth Properties, a 90-bagger in eight years with Netflix (NFLX), etc. – had been when I correctly identified great companies that had fallen on hard times... but then their businesses turned and their stocks took off like rocket ships...

I call the point at which these turns take place "inflection points." Here are four slides on this topic that I presented last week at the Stansberry Conference in Boston: 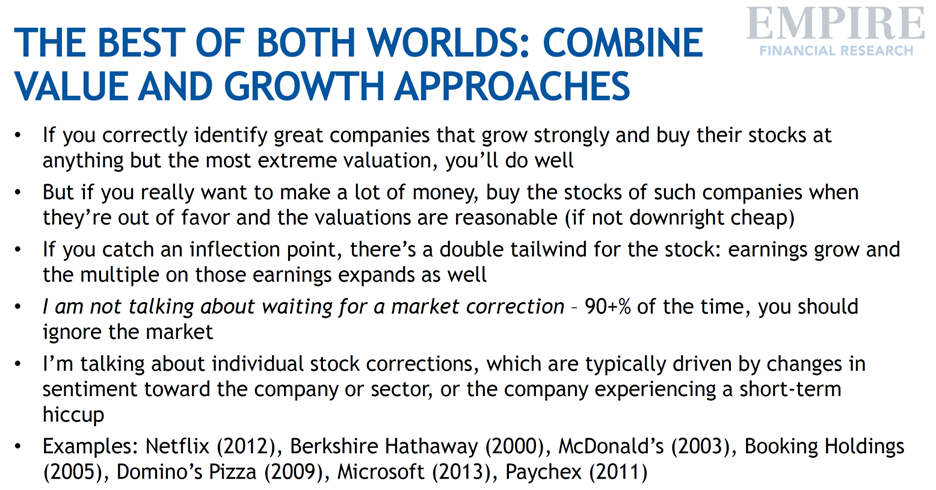 In tomorrow's e-mail, I'll explain why I think META is at an inflection point today... Stay tuned!

3) We spent the weekend at Lake Sunapee, New Hampshire visiting my parents, our oldest daughter, and her boyfriend.

Though the foliage is mostly gone, it was still spectacular. Here are pictures of Susan, Rosie the Wonder Dog, Phoebe the Wonder Pup, and me at the top of Mount Kearsarge, all of us on the porch, and a shot of the sunset over Mount Sunapee: 4) This afternoon, I'm flying to Las Vegas to see the Elton John concert on my 56th birthday tomorrow. A half-dozen friends have raved about it.

One wrote: "It was awesome!! Not only does Elton John still have it, but the band is probably the best I have ever heard. Definitely see the show."

Another wrote: "Absolutely loved it! He's such a special artist. We felt very privileged to get to see him live!!! He had mad energy for a 75-year-old and his voice was great. Everyone was just so happy to be there!!!"

Tickets are widely available and reasonably priced (see Ticketmaster here) and I found nonstop flights for only $288 round trip, so we booked it.

The itinerary I originally booked was nuts – putting us on the ground for only six hours. There's a 3:10 p.m. flight every day from Newark on Spirit (SAVE) (a dreadful airline, but in this case it was one-third of the price of every other option), landing at 5:49 p.m. The concert is from 8 p.m. to 10:35 p.m., and then there's a midnight JetBlue flight back, landing at JFK at 7:43 a.m.

This is what Susan is doing, but I'm now taking the same Spirit flight out today because, by happenstance, my Yosemite climbing guide, Paul, and his wife, Breezy, are in Vegas.

During my brief visit – 30 hours! – we're going to go to the Cirque du Soleil KÀ show tonight, then we'll get up super early tomorrow and climb all day before zipping to the airport to pick up Susan and go to the concert.

The only thing more perfect for my birthday than going to the Elton John concert with Susan and friends is to also climb my brains out the same day!