Rally in Cathie Wood's Fund; Avoid ARKK; These Contrarian Indicators Suggest the Bottom Is In; My 35th high school reunion

I'm starting to buy things I can value – the beaten-down stocks of real businesses that generate real cash flows.

Unfortunately, to prevent conflicts of interest, we at Empire Financial Research aren't able to own in our personal accounts anything we've recommended in our newsletters, so I can't buy my absolute favorite ideas, which include Berkshire Hathaway (BRK-B), Alphabet (GOOGL), Meta Platforms (FB), Amazon (AMZN), and Netflix (NFLX).

Yesterday and this morning, however, I did buy an exchange-traded fund ("ETF") that holds many big-cap Internet stocks, an online payments giant, a leading retailer, and a basket of four large bank stocks.

Sure enough, stocks have ripped since then, none more so than the most beaten-down ones like those owned by Cathie Wood's ARK Innovation Fund (ARKK), as this story in today's Wall Street Journal highlights: Rally in Cathie Wood's Fund Offers Hint of Optimism in Slumping Market. Excerpt:

Investors hunting for bargains in the stock market's carnage are scooping up shares of an old favorite: Cathie Wood's ARK Innovation exchange-traded fund.

Shares of the fund, which is largely populated by growth-oriented technology companies, have advanced 17% since bottoming [on] May 11. They have outpaced the S&P 500, which has edged up 4.4% over the same period.

The fund, which is known by its ARKK ticker symbol, remains down 54% in 2022 and has been one of the highest-profile victims of the Federal Reserve's aggressive campaign to raise interest rates to bring down red-hot inflation. 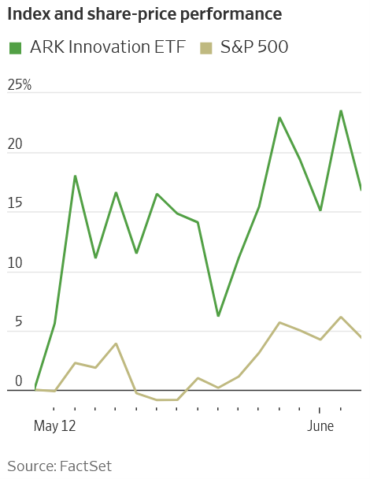 While the bounce over the past month looks impressive, it's barely detectible when we look at a chart of ARKK versus two of my favorite investments – Berkshire Hathaway and the S&P 500 Index – since it peaked on February 12 last year. Since then, as I warned my readers about numerous times, ARKK has completely collapsed: 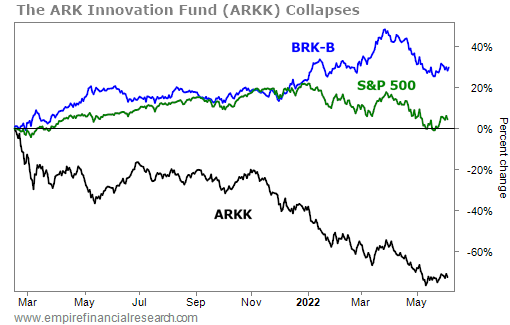 My take: You might be surprised to hear this, but I don't think this is a "dead-cat bounce" for ARKK, because I think my call on May 13 that we'd seen the bottom will prove to be correct... and I'm bullish on growth/tech stocks.

2) That said, I think there are much better ways to play it and continue to believe investors should avoid ARKK at all costs for all of the reasons I've outlined in previous e-mails – most notably that Wood is a terrible stock picker and an even worse risk manager, as this recent New York Magazine article highlights: The Rise and Fall of Wall Street's Most Controversial Investor. Excerpt:

In the realm of Wall Street, Wood is an unusual creature: Not only is she a rare female portfolio manager, but she was also an outlier in her nearly boundless optimism about the riskiest investments on the market, including cryptocurrency and Tesla (TSLA), which four years ago she (correctly) predicted would go up more than 1,000 percent. Last fall, she put a $500,000 price target on bitcoin, then – as bitcoin's price cratered – raised it to $1 million a few months later.

Wood's willingness to make such calls so far ahead of reality – and so out of step with Wall Street's old guard – has earned her a rockstar reputation among stonks-obsessed retail investors, making her a mascot for buy-the-fucking-dip Robinhood (HOOD) traders, some of whom have dubbed her "Cathie Bae" on Reddit.

Even the origin story of Wood's firm was unconventional. She started ARK after reportedly clashing with her former employer: Her old boss at AllianceBernstein (AB) told the Financial Times that "her biggest blind spot is managing risk and volatility" – a serious charge against someone responsible for other people's money.

In fact, when it comes to playing the rebound in growth/tech stocks, I've identified a beaten-up stock in the sector that legitimately has 1,000% upside potential.

I share all the details in a special presentation, which you can watch here.

3) For more reasons on why I've turned bullish, see this Empire Financial Daily essay that my colleague Sam Latter – Empire's Editor in Chief – posted on Saturday: These Contrarian Indicators Suggest the Bottom Is In. Excerpt:

The AAII sentiment survey recently hit its most bearish reading since March 2009...

An incredible 59% of respondents were bearish. In the following graphic, you can see how rare this reading is... 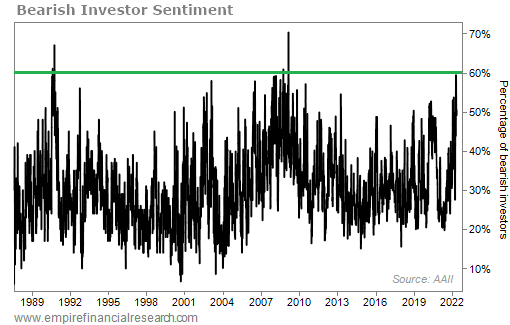 So the million-dollar question is, how do stocks perform after these extreme bearish readings?

We've seen 72 instances where the bearish reading has registered 50% or higher dating back to 1987.

And the results are even better than that if you look at the four other times when the reading was this bearish... 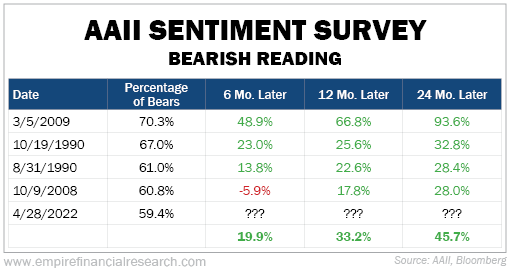 ...On May 5, CNBC ran a special segment called "Markets in Turmoil," which it has trotted out several dozen times dating back to mid-2010.

Charlie Bilello, founder and CEO of Compound Capital Advisors, tweeted that it's "the only indicator with a perfect track record" and shared the following graphic... 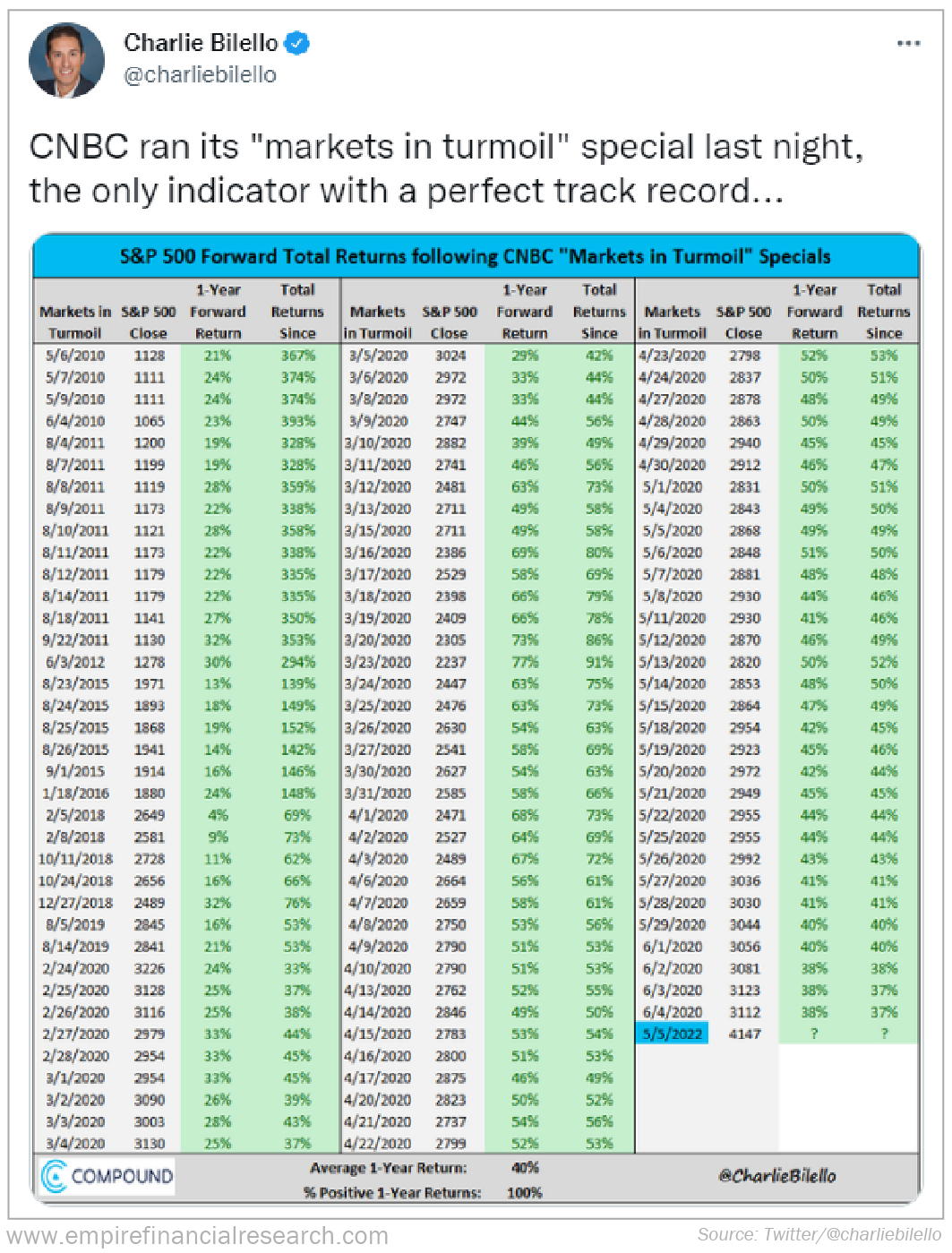 4) I went to my 35th high school reunion last weekend at Northfield Mount Hermon School in western Massachusetts (I actually graduated in 1985, 37 years ago, but it was delayed by two years due to the pandemic).

I drove up with my friend and classmate Steffani, an incredibly talented musician who comes to our apartment every week to give my wife piano lessons. (So e-mail me if you're interested in voice and/or piano lessons... She's also single if you know any nice guys in NYC!) It was a beautiful weekend, as you can see in this picture: 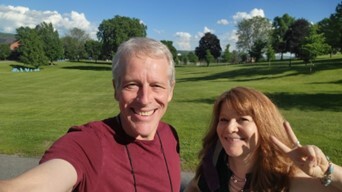 My dad was the Academic Dean, and my mom ran student activities, so I was a "fac brat." We moved there when I was in sixth grade. I attended the local elementary school for a year, then Eaglebrook in seventh and eighth grades (where I gave the commencement address five years ago – video here and transcript here), and then NMH for four years.

I loved NMH! However, I haven't kept in touch with many friends from there, so I had low expectations for the reunion... But I was pleasantly surprised by how much I enjoyed catching up with folks and the good feelings my memories evoked.

Funny story: I had always wanted to send this photo from my senior prom to my date, Kelly, but had never been able to track her down: 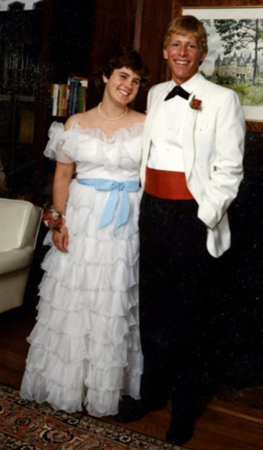 Well, on Friday a woman came up to me, introduced herself, and said, "You might remember me because I was a friend of Kelly's."

It turns out that she had Kelly's cell phone number, so I texted her the picture, which she enjoyed as much as I thought she would!